Welcome to another week of Ps Now Roulette where I choose one title at random to give it the 1 hour treatment.  Last week I looked at the breathtaking Magus which proved to be an interesting game that was so bad it was good!

This week I will be exploring a completely different game, in fact a game that I did not play when it was first released on the PS3 in 2013 by Telltale Games. Before you jump the gun and think you have worked out which story adventure I will be looking at, let me tell you this – you couldn’t be any wronger.  Before Telltale Games were releasing a new franchise every other month, they use to go though a few periods of downtime. This is a period of time where they have just finished a project and without something new to start (yet). When this first happened in 2010 they released Poker Night at the Inventory which was well received. So when they experienced another down town period they returned to the poker genre and released Poker Night 2. This, boys and girls, is this week’s game.

If you cannot tell from the title, Poker Night 2 is a poker simulator where you, the silent player, are matched up against four other players from different popular media products.  This time round the four other players are Sam from the Sam & Max franchise, Brock Samson from the Venture Bros, Ash Williams from The Evil Dead and Claptrap from Borderlands.  In addition to these you have GlaDOS as the dealer and Reginald Van Winslow (Tales from Monkey Island) as the host.  There is a very mixed bag of characters at the table but this is what makes the game so good!

At the core of Poker Night 2 is the game of poker.  I will not go into specifics about this aspect of the game as you will either know how to play the game or not.  The only thing I will say is that, I myself am not a great poker player (there is a lot to remember with what hands beat what) but I found Poker Night 2 as a great tool for learning how to play; it also includes a nice handy cheat sheet which you can look at during the game. 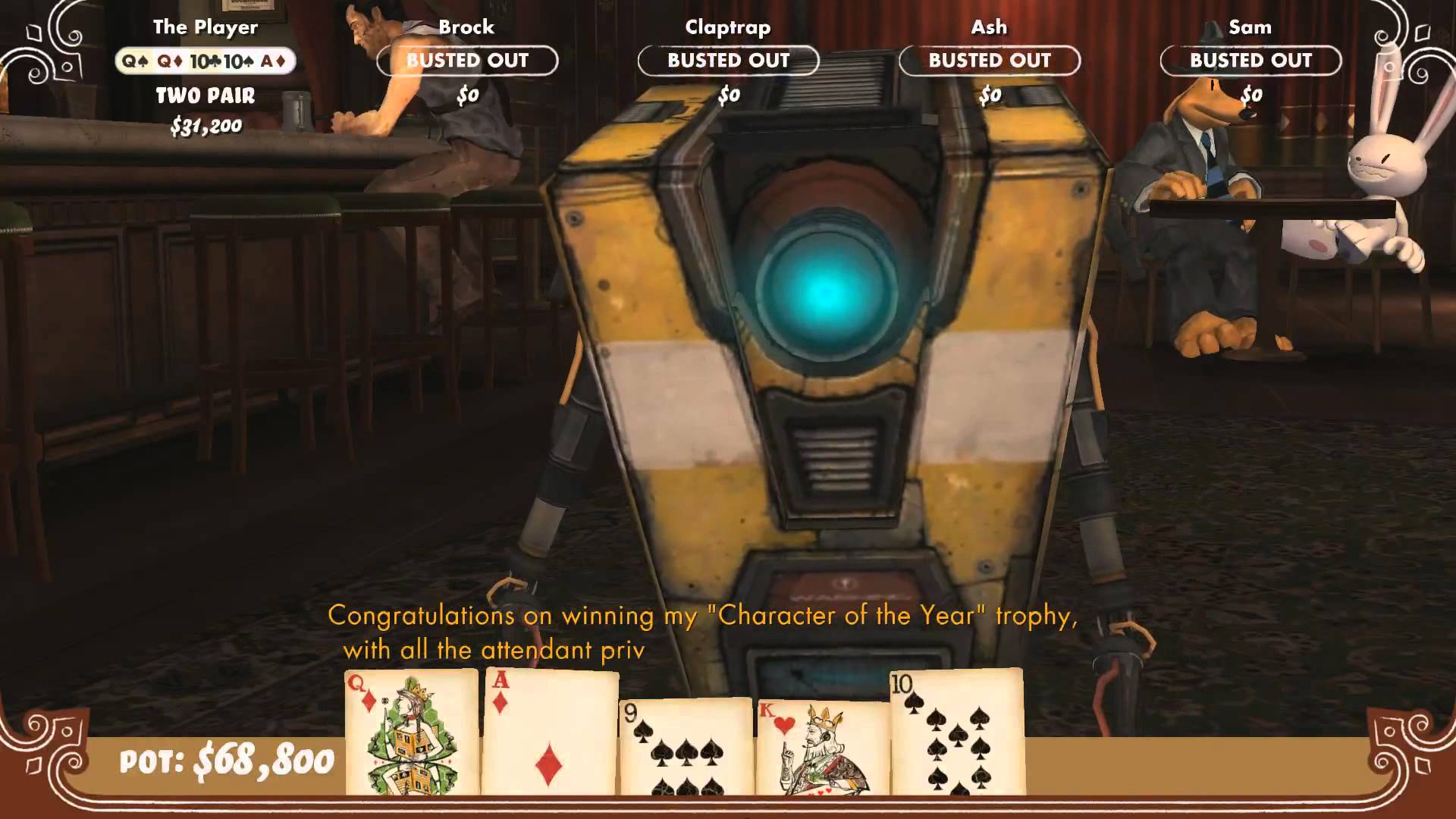 Presentation wise there is not a lot to say as you are stuck looking at the same scene for the entire tournament.  It is set in an underground bar and to be honest if you have ever played a Telltale Game in the past few years you will not be surprised by what you see graphical.  You are presented with a classic Telltale Game look of comic like graphics.  What does stand out is how each character is differently animated depending upon the franchise they are from.  For example, Claptrap is presented as a cell shaded model whereas Brock is presented as a cartoon animation slapped upon a 3D model.  It fits perfectly to the game but is different enough for you to know that each franchise has its only presentation styles.

The one thing I will say about the game in general is that it tends to freeze a lot when saving.  You can hear the music playing in the background still so I do not think it is a network issue but I cannot be sure as I never played this from a physical state (only through PSNow).  If anyone can confirm it was like this before that would be great. 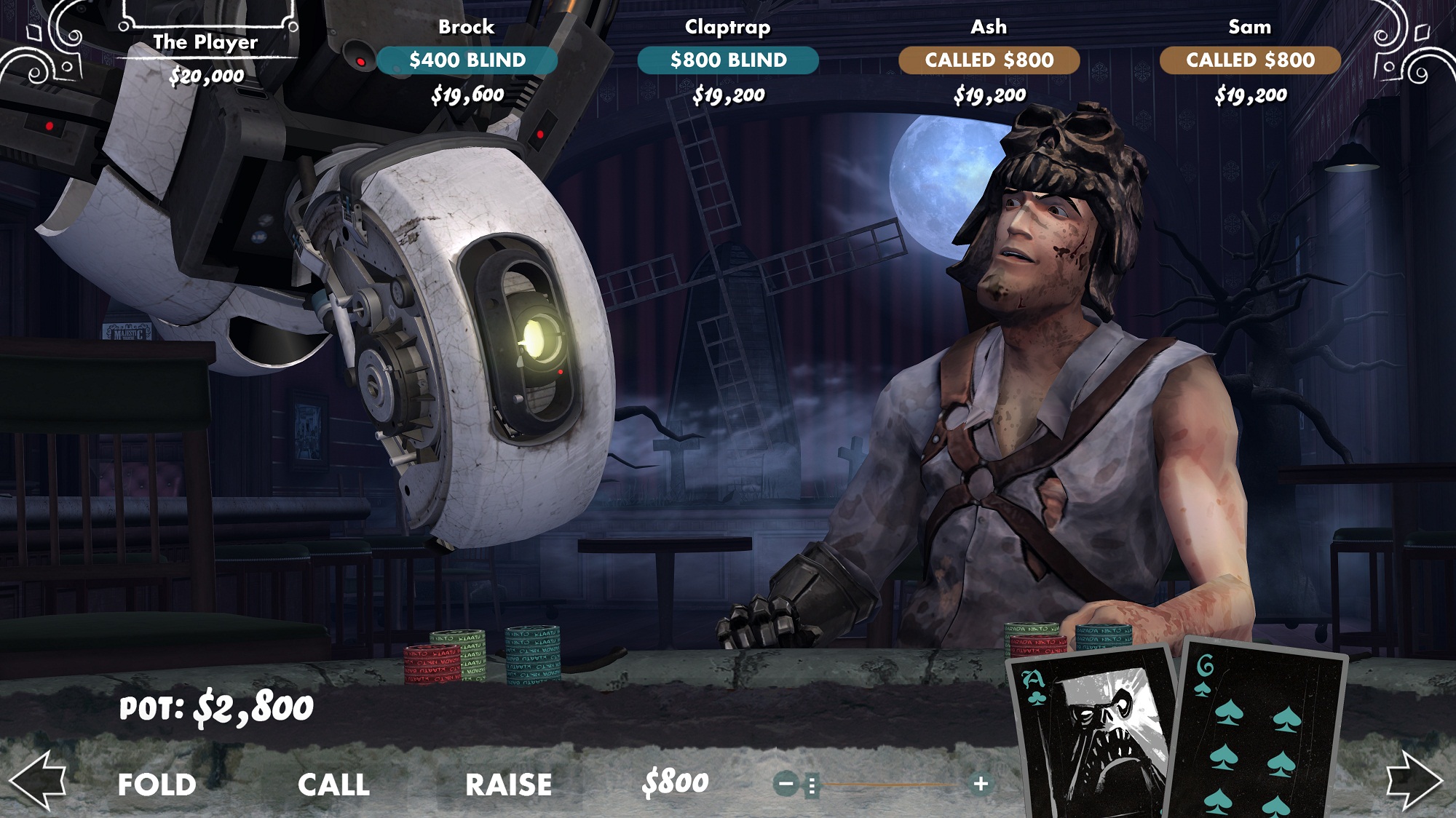 So, Poker Night 2 is just a poker game but what makes it different from your basic card games you can find on your standard PC?  Well it is banter the characters have in between turns.  Sometimes I find myself losing track of the current game as I am too invested in the conversation between two characters and a lot of the time they just make no sense or they are trying to wind each other up.  Either way it is very entertaining to listen too.  Even though you are silent, you will be interactive with too by all the characters, especially GlaDOS – she can be one mean robot when she wants to be!  During the tournament you can buy any of your four opponents a drink from the bar using tokens that you have won.  What this does it get them nice and drunk and the more they have, the more likely they will tell you what weakness they have – very useful if you want to call a bluff.

For me, these interactions are what makes Poker Night 2 a great game.  If it was just a straightforward poker game, I think it would get boring rather quickly but what you have here is a full bar scene with characters who all have the same goal and that is to just win.  They are not friends, in fact they are not even enemies – just four guys trying to win a little extra cash.

So here we are again – is Poker Night 2 worth your time of day or is it another game that will just vanish into the ever growing PS Now service?  For me I believe this is one that you should not miss.  It is not a title you can invest a lot of time in all at once but it is a great wind down game to either play at the end of a game session or during a gap between AAA titles.  Poker Night 2 was created during down time for gamers to play during their down time – it is as simple as that.

Again, thank you for reading this feature and I hope you are giving theses titles a go.  If there is any title (on the UK service) that you believe deserves a mention, leave a comment below or get in touch with me on twitter (@DesmondMayer).  Next week there will be no Ps Now Roulette as I will be away but tune in the following week (19th April) for the next edition.

Missed last weeks edition? No worries, head over here to catch up!