Ys VIII: Lacrimosa of Dana is still the fantastic action RPG which I fell in love with last year just a little more blemished.

First off, the ability to take this title on the go really benefits it, it has such a pick up and play feel about it and the fact you can just decide to explore the mysterious island while commuting then pick up later is a huge bonus for me.

The package also includes the DLC which is several costumes and items. Nothing game changing but still a welcome addition & you can have classic Adol which was an instant choice for an old timer like me!.

The performance of the game on the other hand has taken quite a hit and as such makes the game look quite rough and worse, quite slow in places. Speed is something I’ve always associated with Ys and the 30fps really hampers it, fuzzy textures and a almost Flip book level of animations really knocks the shine off this one.

If you already own Ys VIII I wouldn’t suggest double dipping on this one, unless the portability is a major factor. On the other hand if you don’t own Ys VIII and can find it at a reasonable price you’ll get one of the finest adventures around!.

Below is our original review of Ys VIII: Lacrimosa of DANA 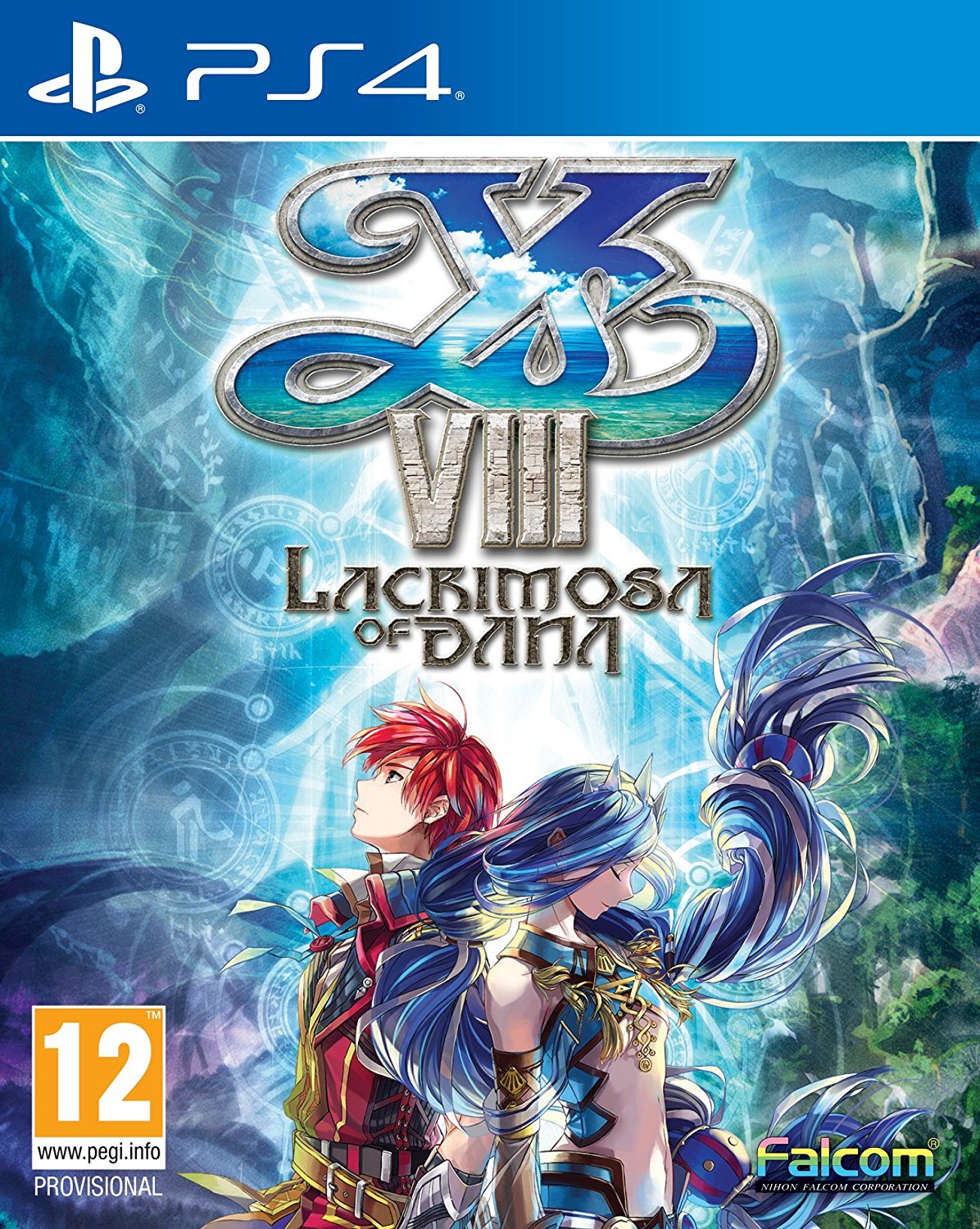 Ys VIII: Lacrimosa of DANA (pronounced eese) follows on naturally from Ys Seven which wasn’t actually the last Ys game to drop, through remakes and prequels the series slowly chugs along it’s main narrative retconning and tweaking while only progressing very rarely. The game stars intrepid adventurer Adol Christin, master of combat, treasure locator and the most dangerous man to ride a boat with!.

The Ys series is quite well written in that every game can be totally played standalone but if you’re a fan of the series you get the added bonus of the deep world lore and references to previous adventures & returning cast. Ys VIII: Lacrimosa of DANA starts off with Adol and his travel companion Dogi boarding a ship (oh dear…) to their next adventure, it’s not long until the Ship’s captain is spinning you a yarn about an island which carries a curse and no one has ever explored it. Naturally Adol’s curiosity is peaked and as would luck have it, the boat gets shipwrecked and Adol lands on said island!, it seems Adol can’t board any boat without it ending badly!. 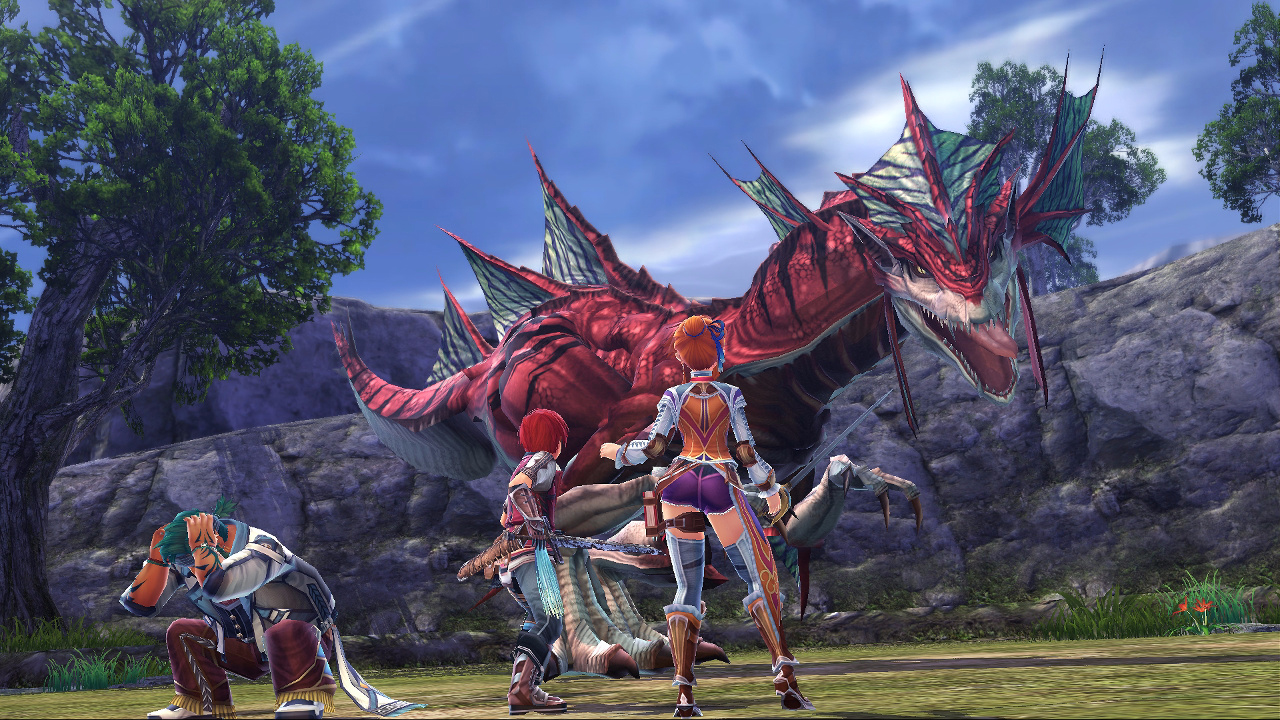 Following the recent love of survival themes the game then sets you about exploring and finding ways to survive this treacherous and mysterious island, finding the other passengers and battling your way through all kinds of fantasy baddies. This is vintage Ys, putting you at the heart of a mystery and puzzling, fighting and platforming your way through it.

The story is quite engaging and the characters are well written, Falcom have a real knack for creating interesting worlds and events and Ys continues this legacy on well. Characters throughout will mention events and areas of the world and you’ll feel compelled to know more, the island mystery carries on at a great pace and the story never seems to have any artifical padding. It may seem a little on the short side by JRPG standards but the Ys series have never really been about massive playtimes with story padding. 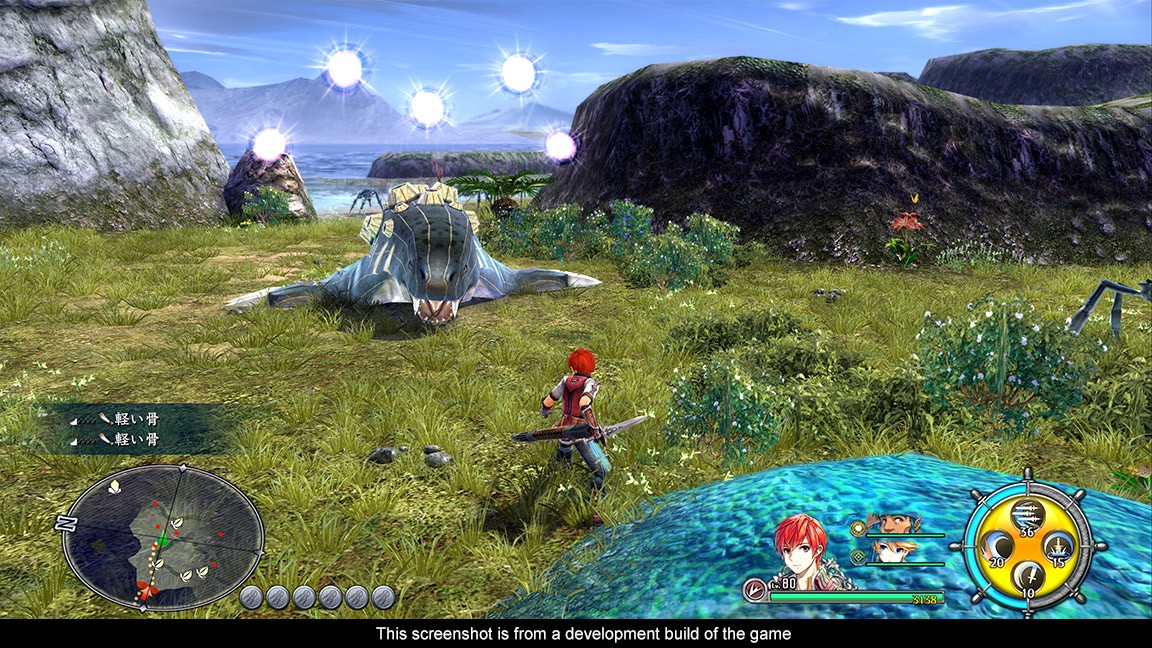 HEAR THE CALL OF ADVENTURE

Graphically Ys VIII: Lacrimosa of DANA isn’t exactly some elusive piece of art, more like a passable reprint. Being that the game is releasing on both the Playstation 4 & Vita you find games done with this in mind tend to lack most nuances of games made with the current gen in mind. Textures pop in and look strange at times, the character models despite looking fairly detailed also manage to have an air of blandness of them, the game looks fairly vivid but never really pops and the animations are just about as basic as it comes.

It’s a shame that the graphics didn’t take advantage of the Playstation 4 more as the art direction of the game and the settings really would of the made the game visually diverse and absolutely stunning rather than just passable. I understand why the visuals have had to take this hit but it’s just a shame and does bring the overall product down somewhat being that it’s the first Ys Console release since the Playstation 2.

Aurally things are just as good as always for the Ys series I am happy to report. For those unfamiliar with the series, one of the things you can always count on is that the soundtrack is going to be good…..real good, Ys VIII: Lacrimosa of DANA is no exception!. The music creates some brilliant ambiance when exploring the island and when the battle music kicks up in just perfectly ups the tempo, don’t even start me on some of the guitar destroying boss fight music!.

The voice acting is done moderately well with the English V.A being average, far from the lowly lows of some titles I wouldn’t care to mention *coughAkibasBeatcough* and not quite the lofty heights of the current JRPG flavor of the week *coughsplutterPersona5spluttercough* think I’ll get myself a glass of water. 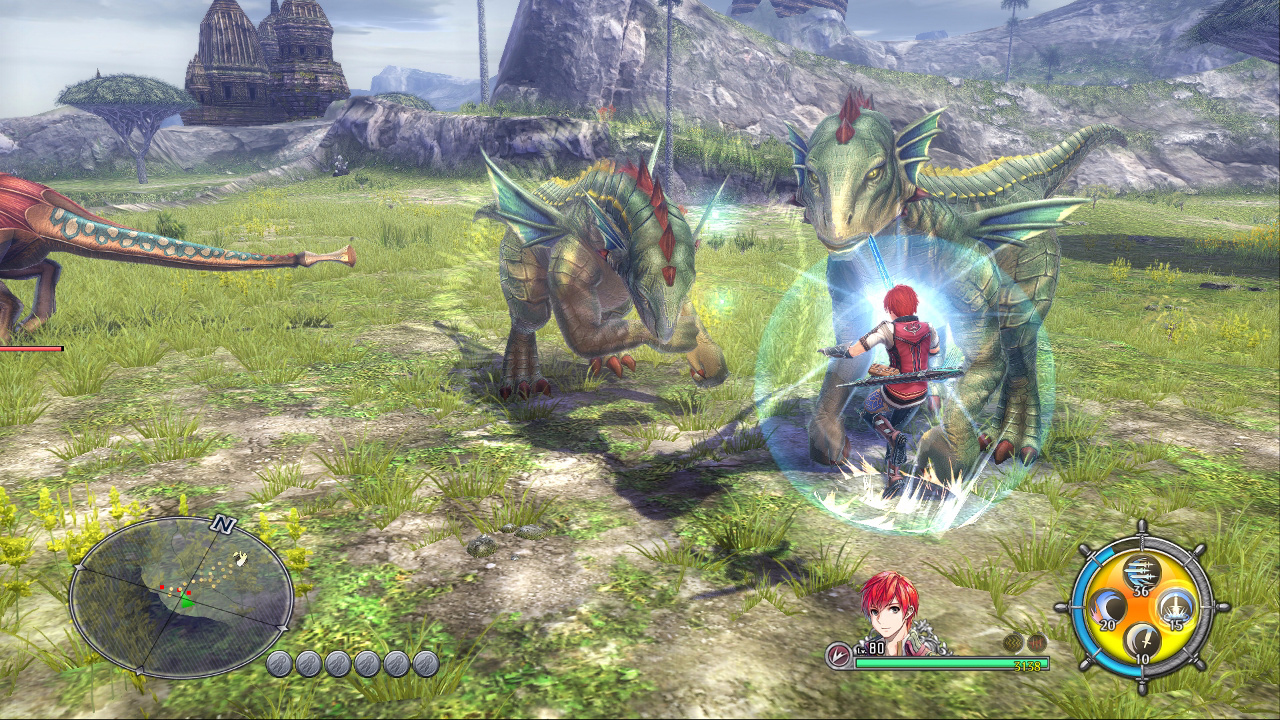 So you may be thinking “So far so good, but how does it play?” well lets dive right in on the mystery shall we?. Ys VIII: Lacrimosa of DANA is simply an Action Role Playing Game, it features stats and equips as well as skill sets and other factors associated with RPG games but it’s real time, it’s fast and also features generous lashing of inspiration from titles such as Zelda and the many “Metroidvania” style games.

As you progress through the island you’ll find items and party members which will help you explore older areas for more treasure, dungeons and other goodies. Terrain traversal is fine and naturally you usually have an idea of where you can go and where you need to work towards. For bigger trips the game does have the much loved Fast Travel option but there are so many enemies and items to grind it’d be a shame to rely on this feature too much!.

As you explore the island you’ll be battling enemies at a blistering speed in real time, holding down the shoulder buttons to help activate skills for higher damage and to keep that high combo rolling on. You have the ability to block and dodge and these give benefits should you hit them at the very last moment before impact, keeping you on your toes and enjoying this ride to it’s full potential. Some enemies are weak to certain types of impact such as Slash or Impale so to take advantage you’ll press the character switch button which instantaneously switches to your next party member.

This is something the Ys series really prides itself on and justifiably too, there is very little downtime when you’re out in the field, it’s constant, it’s fast and it’s exciting which some JRPG title don’t have enough of. It’s done tremendously and is one of the reasons this cult title still has legions of fans 30 years down the road.

The game features a whole bunch of side quests to help you grind to the higher levels and add generously to the run time. The cast are engaging and the main narrative is engrossing and gripping from start to end. My major gripe from the previous release on Vita has been fixed too where Adol and Co. are still fast but the character movement seems natural rather than looking like the cast has air boots on them. 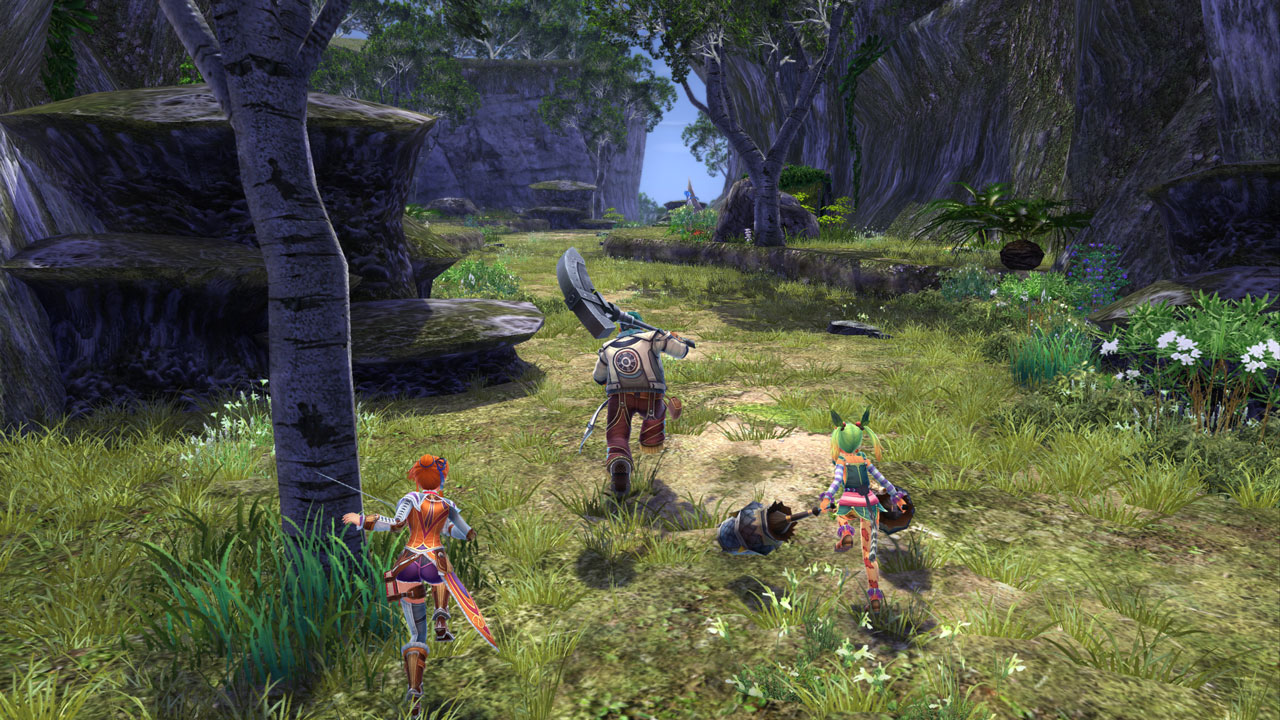 YS TIME FOR THE EPILOGUE

Ys VIII: Lacrimosa of Dana is an utter gem of game from start to finish, it’s opening is the slowest part and that is over within 20 minutes or so then it’s 30 hours upwards of exploring, monster killing and ear pleasing music. It’s a genuine pleasure to play the game on consoles as I would imagine it still is on the Vita, there isn’t too much competition on the Playstation 4 for this title which gives it an advantage also.

I have over the years become enamored with the series and this latest entry has just boosted that love even further. I feel the game is often held back by being on handhelds or not getting enough time in the public eye, with the recent releases on Steam, the release of the fantastic Ys Origins on Playstation 4 which I also reviewed and can be found HERE and the fact this can be found in stores with a physical release can only do wonders for the series. Now is the perfect time to jump into the series, easily one of my favourite Ys title and it shows that not all JRPG games are riddled with slow pacing and tedious grind. Ys VIII: Lacrimosa of Dana is a fantastic modernization of Nes/Snes era adventure games and enough to ignite the flame of adventure in the hard of anyone!, Long live Adol Christin but please don’t get on any more boats!.