Digimon Story Cyber Sleuth has received its latest installment this month in the form of Hackers Memory. It marks the 3rd Digimon title in as many years to hit western home consoles from Bandai namco. Given the success of its predecessor that reached the 7th best selling title in the UK, and remained in the top sellers chart for what seemed like forever, we decided to dive in and see how it holds up.

Hackers Memory, as I shall call it going forward, is set around the events of Cyber sleuth with recurring cast, locations and plot points, and sees the main characters from both installments in close proximity while they go about the events from there respective title. The game this time around is sold on it been a darker backstory to the events of cyber sleuth, with the unsung heroes that worked in the background finally able to take center stage – boasting over 320 possible partner Digimon to help you along the way.

In hackers memory you take on the role of Keisuke Amazawa, a young man that found himself a victim of what is essentially ID theft in the form of an account raid and also maybe far, far too much coffee. Due to this he is treated as the very criminal that targeted him. In a desperate attempt to clear his name he blindly charges into the unknown, hoping to return things to the way they were, unbeknown to him this would be the spark to kick start an adventure that would see him become exactly what he was trying to prove he wasn’t, as well as the start of things to come.

The story of hackers memory starts off much more underwhelming than that of cyber sleuth. In the first few moments you’re told that you are not the hero. Instead you’re underwhelming, simply support, heck they may have well just called you generic NPC and been done with it. Already the big red flags start going up, wondering if i’d payed full price for a DLC that simply sees the exact same events in another body. However it soon becomes apparent there is more of note to this young man than his massively creepy eyes. Hes not simply an NPC. Hes human. He is you, me, everyone that finds themselves in an impossible situation, desperate to do what they can with no idea on how to even do it or how far to push it before we cross that line. The world he becomes a part of swiftly develops its own identity and unique areas, while offering the same core elements that clearly sold so well. Despite said alarm bells in the early moments of the title, I have to admit to growing rather attached to each of the new faces that appear and find the less than heroic storyline much more grounded and relatable given the setting of the world. 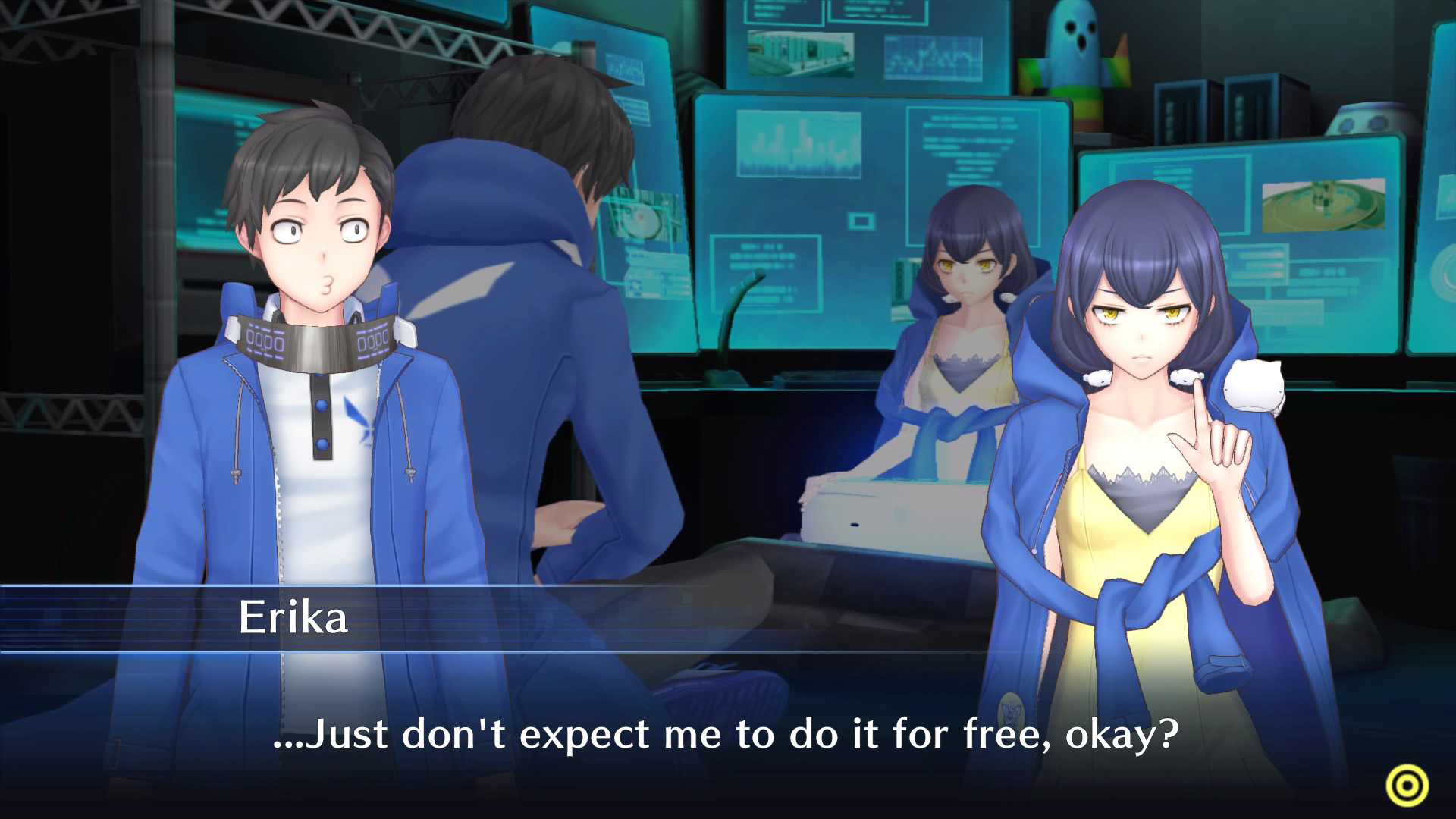 For those that did in fact play Cyber sleuth, the game play is almost totally identical in execution and for those that liked what the previous instalment offered should be a ideal follow up. Those that skipped the original will likely have little to no issue jumping straight into this title, as stated the story and game run parallel to cyber sleuths events with the point I have reached requiring no prior knowledge to fully enjoy, but still offering small nods at its counterpart.

The turn based combat system makes its return, along with all of the previous installments features. As the game is once more broken up into multiple chapters each containing side quests, exploration as well as chapter exclusive interactions and discoveries. Each chapter consists of 1 or more story quests, known as cases, that must be played in order to progress. However, like all quests they can be placed on hold if need be so you can go train, evolve or explore. Most of the games content however seems to be focused around secondary and tertiary quests that, while optional, can provide a significant advantage in the main game. While it remains almost identical to cyber sleuth in execution, the new story line and interactions serve to give a new experience without being overly repetitive.

Along with the battle system and cast, the farm and raising characteristics of cyber sleuth also make a return once more. This allows for easy raising of the many Digimon you will likely gather cross your adventure, without putting in too much extra effort in grinding out multiple monsters. They will mature naturally while you complete the main story or side quests and offers a ideal solution to repetitive grinding, even if it is a little slower. It is indispensable in terms of freeing up some of the work load. 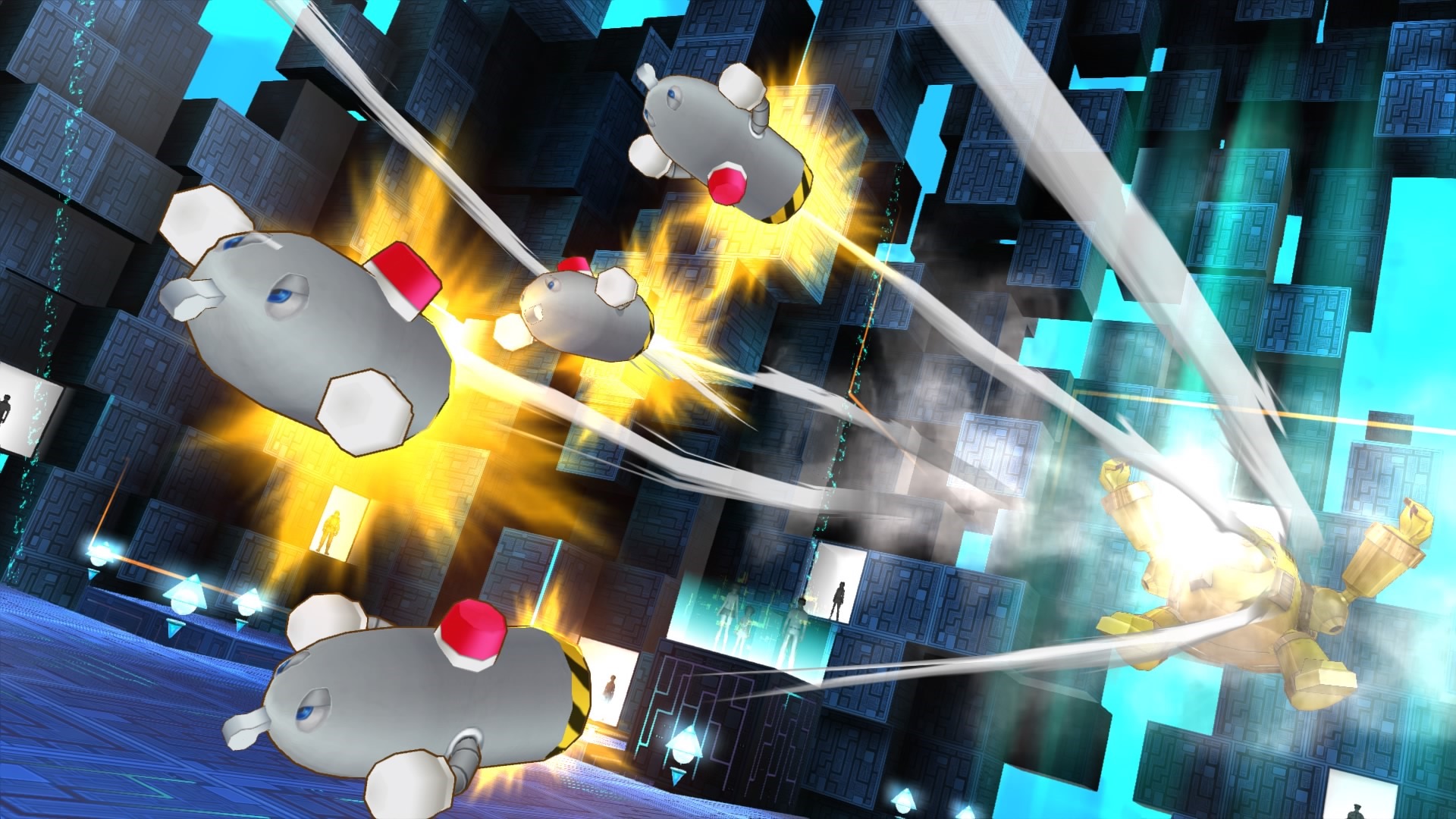 The visuals in Hackers Memory are mostly comprised of assets from the previous title, so returning fans will once more feel very at home. The anime inspired models and world fit perfectly with the Digimon name, and while they don’t push the limits of the PS4, they don’t fall into the realm of disappointing. Gameplay is smooth and screen transitions are short making for mostly uninterpreted playtime, despite the small map zones. To add, overall the tones in both “real” and digital worlds are pleasant to look at and offer some fun environments to traverse or obstacles to overcome.

The audio assets also make a return. However once more this can not be sniffed at, as much like the previous title, they work well in setting tone during scenes as well as when traversing the maps of towns and dungeons. The voice acting seems appropriate for each cast member too, however there’s sadly no English dub.

Overall the game should be a welcome addition for fans of cyber sleuth or Digimon in general, with its familiar gameplay and new take on the story. Its sure to rank highly in the charts once more with its extended roster and already established world and cast. Luckily its easy to become invested in the world once again, or even an ideal place for newbies to start if they so choose before going to cyber sleuth, due to its own identity. Despite my initial fears, it’s a new and interesting title that I would recommenced to many a Digimon fan.