Jojo’s Bizarre Adventure: Eyes of Heaven is the latest in the series of JoJo licensed games, this being the series debut on Playstation 4. Developed by the ever talented Manga/Anime enthusiasts CyberConnect2 this is the follow up to the Playstation 3 hit All Star Battle, is this game close to Heaven or is it just another false prophet? ORA onwards to find out!. 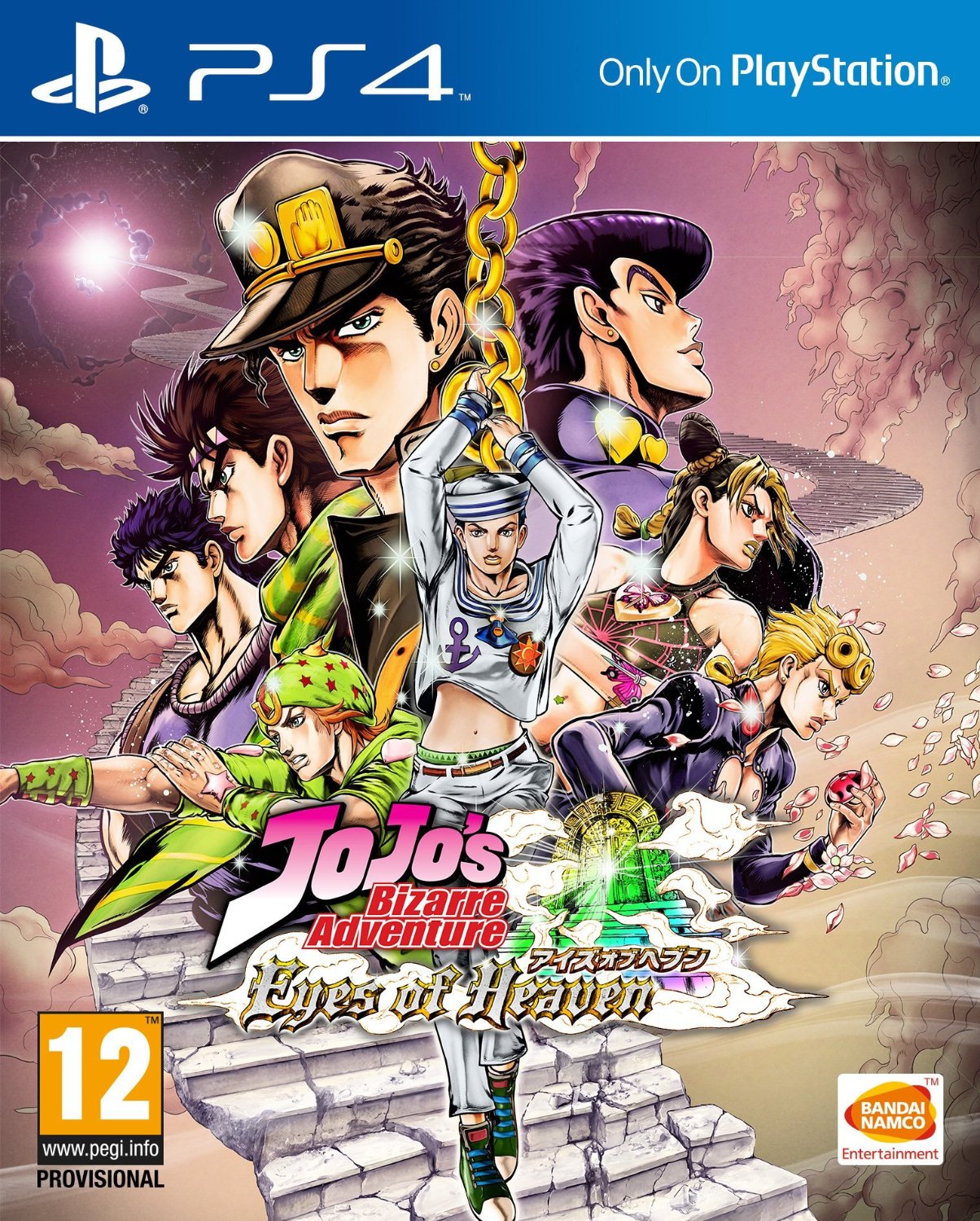 Eyes of Heaven takes on the form of a 3D Brawler unlike ASB which was more of a 2.5D Fighting game, the main difference is you have full 3D field control like titles such as Anarchy Reigns. Most battles feature 2 vs 2 and are all set in famous locations from the series using an impressive roster of colourful and diverse characters.

The character designs are all brilliantly accurate as each model looks just as they would in the anime/manga down to the exact poses they pull. The stages are all fairly iconic of the series though they lack the interactivity and easter eggs of the stages in ASB. The roster contains over 50 characters from the series starting with Phantom Blood and ending in Jojolion with stages to accompany each arc. You also have support characters within menus and the overall menu design and layout just screams JoJo’s Bizarre Adventure. 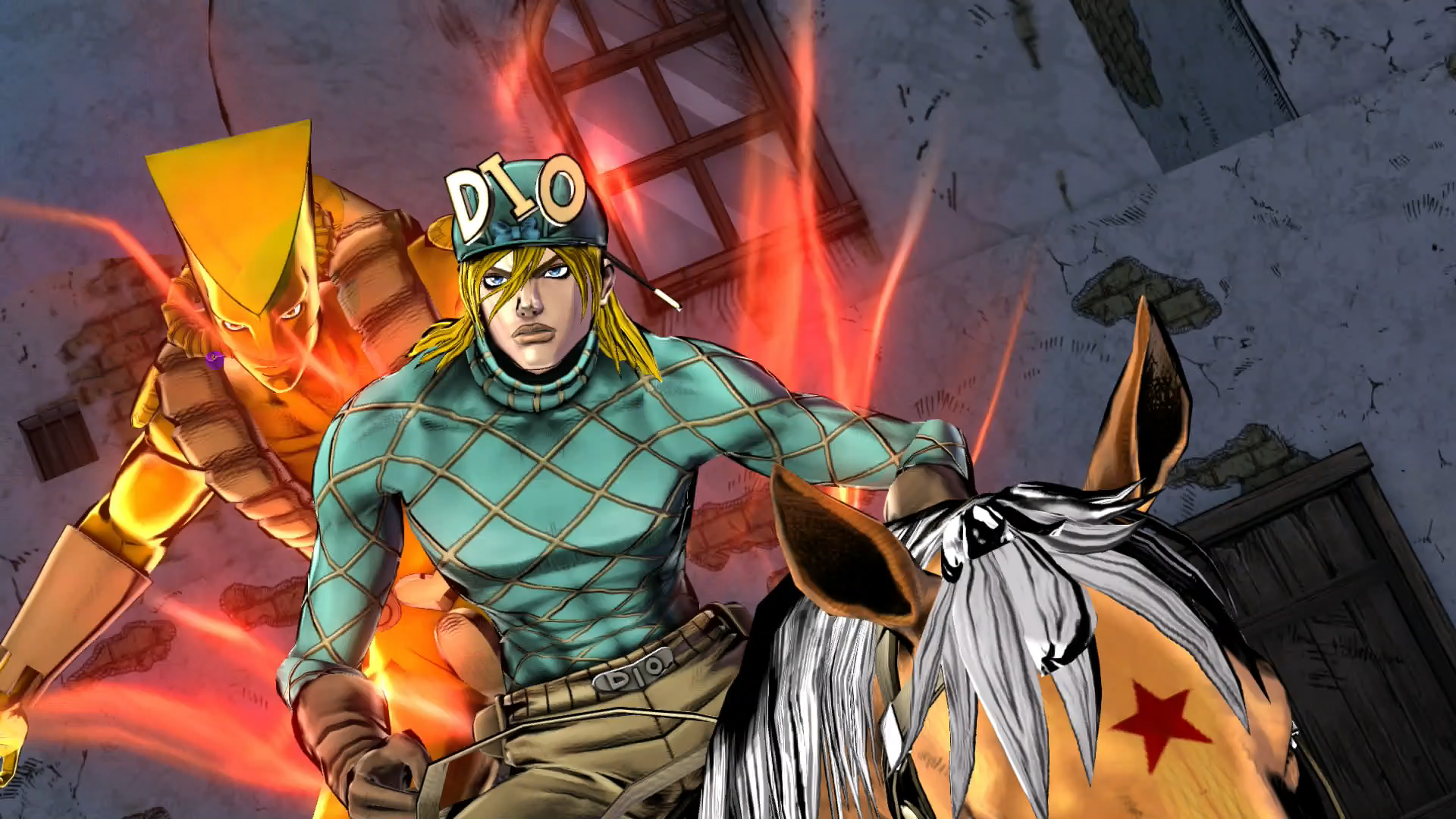 As previously mentioned the stages lack some of the nuances that ASB had which is a shame considering the size and design of the stages. On a whole this game visually it doesn’t really have too much going on, during cutscenes the characters aren’t animated past the bare essential and the stages are all empty. This is a massive shame because coming into EoH from ASB I had a certain level of expectation on this front and factoring in that this is on the current gen system (there was a Ps3 port but this makes the fact worse) and it actually looks lifeless compared to the original PS3 release. For me personally I have always found JoJo’s art style and direction to be vibrant and exciting with tonnes of little things adding towards the overall experience, unfortunately this is completely lost in this title.

On the audio side of things, I can’t fault the game at all, it’s truly authentic of the JoJo series and furthers the experience in that regard. The Voice Acting is spot on for anyone familiar with the anime series and features some of the more pleasing tracks from the OST. During battle you’ll constantly hear battle cries of ORA, MUDA and ZA WARUDO which is essential for any JoJo related to have in order to pass approval of the fans.

So the core of the game is the battle system, this is 2vs2 Battle arena style action, you have weapons in the arena you can use and items to pick up to help give you the advantage. If you have ever played this style of game you’ll know it can be hard to create the perfect balance in which it’s fun to play but also deep enough to keep you playing, initially JoJo fails at this point but upon further research it became quite the brawler.

As previously mentioned the arenas you battle in are quite empty, now for reference the last game I played like this was Anarchy Reigns, that title just had so much going on between the stage constantly changing and various gimmicks to keep you on your toes. All Star Battle had similar gimmicks in the stages in that title, unfortunately outside of a few the stages in EoH don’t have this feature which really strips more than you’d think from the game. 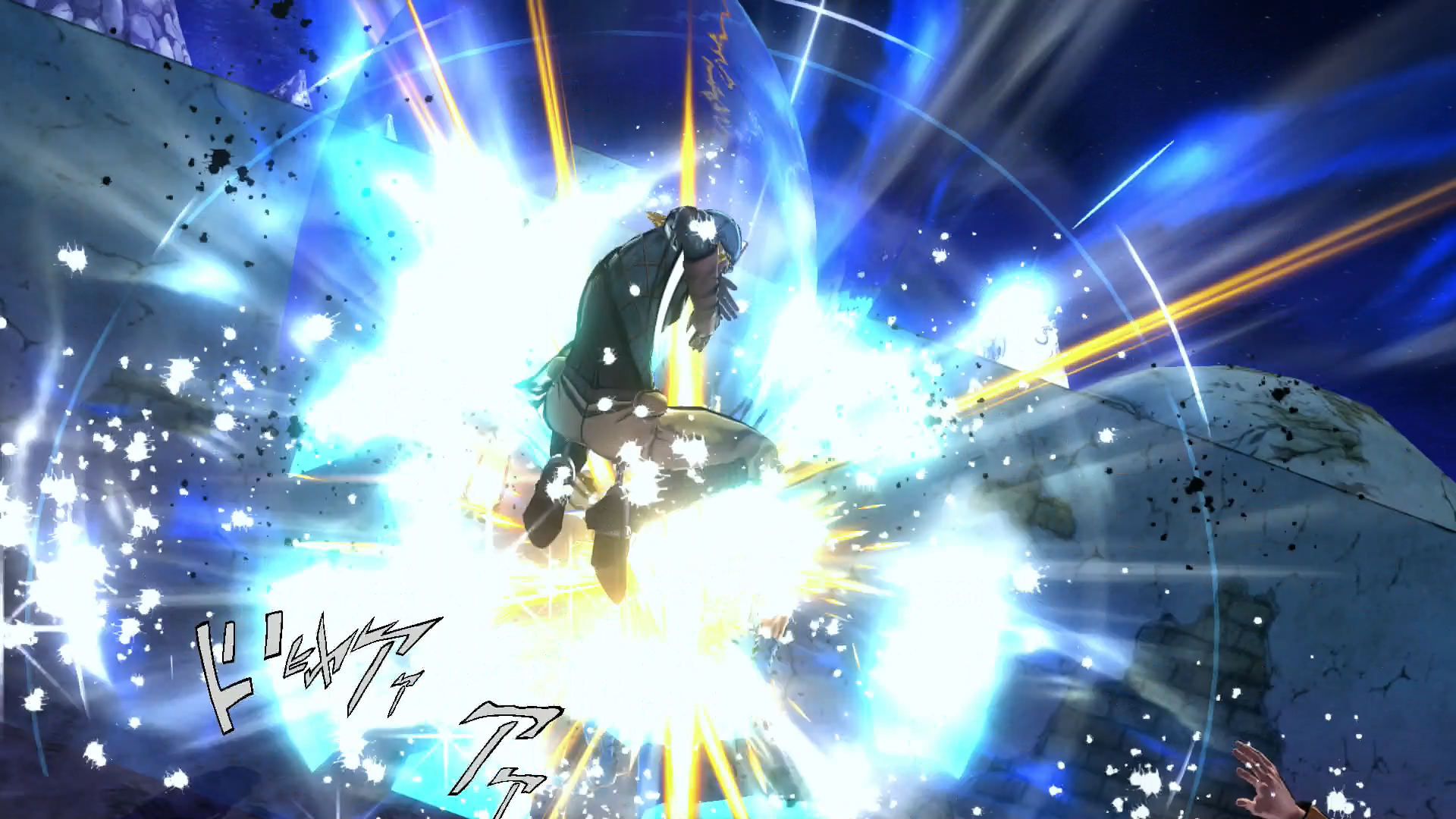 Another thing to consider is the move lists for each character, things get very repetitive when you aren’t given much variation in combat which fortunately EoH does give you, eventually. The first handful of hours you’re stuck using the same 2 combo attacks and 1 special move until you’ve leveled up the characters enough to unlock more moves, sure it adds more of a reason for progression but it doesn’t half make the first 3/4 hours of the game stink. As I mentioned earlier I did some research into this upon one of my later playthroughs of the game and spotted in the options an “Easy Beat” option that was auto on, upon turning this off I felt I had much more input in combat and started to enjoy the game tonnes more.

I’d highly suggest that you turn this option off upon start up and enjoy the game how it was intended, I was a little miffed that this was turned on straight away and felt it would of smoothed my first impression so much more had they brought it to my attention and asked if I wanted the option on.

To help mix things up you have Team Combos which once you activate you have to fill up a meter to unleash a rather powerful team attack & your special move which can be incredibly easy to miss but should you hit it really gives you a better position in the match. The team element is one of the better aspects within the game at least when you play with friends, the A.I is as dumb as rocks and has a tendency to either get K.O’d quickly or just stand around posing until the match is over. Should you take out one of the other team, the remaining member gets a temporary boost in health, defense and attack giving them the chance to level the playing field.

The roster of the game is incredibly healthy with a wealth of different characters who mostly feel unique in combat and navigation, there were for myself I found some curious omissions and it was clearly catered to tie in more around the stage where the anime is at with the roster favoring characters from Phantom Blood to Diamond is Unbreakable leaving the latter parts of the manga feeling somewhat thin. 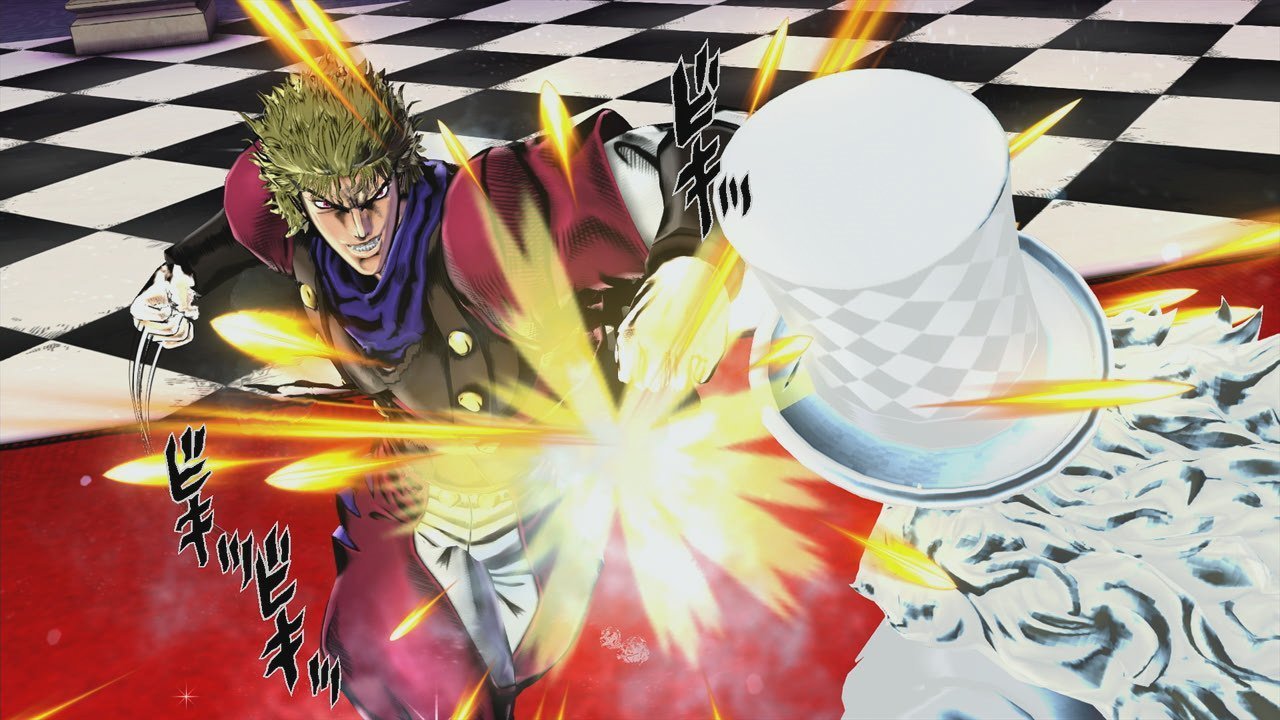 The main mode of the game is the Story Mode and is fortunately quite fun on the condition you are a fan of the series. Each chapter is themed around a part of the manga/anime and you are given a brief catch up before you are thrown into the world. The story is a totally new tale that was overseen by the creator of the manga and is oozing that delicious fan service. In this mode you’ll explore the stages, battle story characters, battle harder enemies for extra EXP & money, fight mob battles which play like watered down (drowned) Dynasty Warriors, find items and take part in extra missions based on the series and various Dream Matches.

Another nice addition I found around the halfway mark in the story was the poker mini game based off the Poker Battle with Darby from Stardust Crusaders, with options to cheat and bluff and how authentic to the series this felt I actually enjoyed this bit quite alot and with the story really taking off by this point I felt the game stepped up alot by this juncture.

Outside of the Story Mode you have the standard versus and Online battles modes, gallery to look at all your unlockables and a shop to spend all your JoJo $ in. Sadly unlike the western release of ASB there isn’t an additional Arcade mode which can leave it feeling rather thin but there is a tonne of stuff to do in the story mode which you can easily sink upwards to 20 hours in. In terms of unlockable items there is so much to buy and unlock via the story mode in the style of costumes, battle quotes and poses that it’ll keep your inner JoJo fan more than busy.

In all honesty my first few hours with this game really soured me, it felt clunky and empty and I felt I wouldn’t of even bothered with it had it not been covered in JoJo goodness. Fortunatly I stuck with it, changed the Auto-beat off and got lost in the story and found the hours flying by with it, the story had some awesome character development and writing in it but that was married with strange lines, horrible name changes and wonky animations, very much a mixed bag but when it boiled down to it the good part won out.

I think it would be a much harder sell to someone who wasn’t even the slightest bit curious about JoJo but for anyone who’s recently started the Bizarre Adventures this is a fine game to start with if you don’t have access to All Star Battle on the Playstation 3, It’s a new story so you don’t really need to be up to date with the manga and it does give you the basic stories of each Part, plus it has a handy JoJo Glossary in the options for anything you aren’t sure about.

In regards to the final score, if you aren’t interested or invested in JoJo knock the game down 2 points, it’s harsh early hours may be too harmful to it’s overall product even if you find the character roster and artwork charming.