If you are a fan of RPGs you may have already crossed paths with a little old school RPG called Etrian Odysessy. Chances are you may of also played Mystery Dungeon in one form or another, be it Pokemon Mystery Dungeon or one of the many many roguelikes that crop up. Atlus has decided to team up with the Mystery Dungeon team to create a masterclass in “hardcore” RPG, the question stands at how well does this work and do both EO & MD work well together in grind based dungeon exploring bliss? 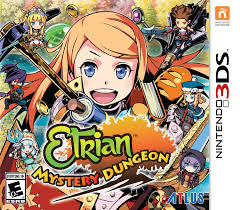 Etrian Mystery Dungeon as previously mentioned is a cross over title featuring the assets of EO and the system of Mystery Dungeon, for those not familiar with Mystery Dungeon or Roguelike i’ll go over why they are different than that of a standard RPG.

In a Mystery Dungeon title you are usually presented with a top down view of your team, you then move your team to the various tiles on the floor all the while enemies also move after you in a sped up turn based style. Combat is usually 1 attack button, some special attacks and the ability to throw items at monsters. The floors in the dungeon are always random and have several special tile types for example traps and healing tiles, loot is also randomly generated and should you die in the dungeon stripped from you along with any levels you may have gained (Not your levels in the case of this particular title) When not in combat your health will regenerate but at the expense of Energy, this is also consumed through moving and attacking, food tops this up and keeps you plodding on. Final note, Mystery Dungeon and Roguelike are for the most part TOUGH, Etrian Odyssey already has a reputation for being hard as nails, this is no exception. 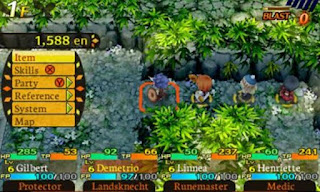 To somewhat stir the mix up a little EMD adds features such as a stash to keep hold of items so you don’t get stripped completely and the D.O.E feature which was quite nifty. D.O.E is basically the F.O.E from the Etrian series, for those not familiar with it or Persona Q they are basically stronger enemies than usual which hit like a bus, in this game some will try and escape the dungeon and wreck your town causing GAME OVER. To counter this you can make fortresses within the dungeon to help you take on these beasties by having more characters in reserve which trust me you’ll need!

Talking of characters more specifically party members, in this much like in E.O you get the ability to fill your guild (party) with custom made characters. This helps you tailor make the party to your needs and the requirements of the dungeons, it’s quite refreshing to see a full party explore the dungeons unlike the usually solo MD environment.

While exploring the dungeons with your party you’ll notice one major thing with them, the A.I is DUMB! Between constantly badgering about item use, using special attacks like they are going out of fashion, doing nothing in the hallways & generally getting in the way, you’ll be spending a good sum of time tweaking the party options or just grinding your teeth, in the end a good idea with poor execution and quite damaging at points of the game. 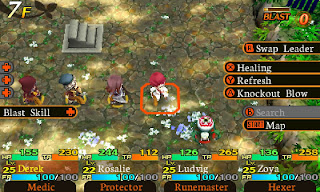 Graphically the game is nice, the art work is always top notch on the Etrian Odyssey titles & this is no exception, I’d go as far to say in the menus it’s near identical. Dungeon graphics are nice as well, character models have a nice chibi charm to them, the enemies and dungeons all look like they did in the main games with a different camera angle. The music is standard affair for Etrian, a very fantasy feel that perfectly suits the tone of the game and the sound effects all do the job even if the sound output on the 3DS isn’t the best. The Visuals and Audio of this package for me are the strongest part and seemed to be what EO brought to the table in this cross over where as the gameplay was more Mystery Dungeon with a few tweaks.

If you aren’t familiar with either series the lack of story may put you off a little, generally with these titles they are build your own adventure with lore in the background, this game is no different and certainly isn’t aimed for the crowd who want something a little more juicy to read in between expeditions. 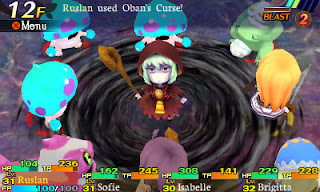 In my experience this style of gameplay is very love it or hate it with only a few notable exceptions breaking through (for myself Izuna & ZHP) & Etrian Mystery Dungeon really tries to be one. Unfortunately it’s 2 steps forward 3 steps back the new features included like the Fortress building are good but poorly explained and creates an artificial difficulty when playing, A.I also being empty headed hampers the overall package. Visually it’s very stimulating and it does help pass the hours but the issues mentioned above coupled with a game breaking bug in the post game and I personally suffered a save deletion around 25 hours in means that this isn’t going to be THE Mystery Dungeon on everyones lips, instead just a little better than average title for fans of the genre