It’s the 25th anniversary of one of the premier Bullet Hell titles, Raiden!. Often mentioned alongside the other classics Raiden has remained in peoples memories for all the right reasons. Releasing on the X Box One last year, Raiden V has resurfaced on the PS4 & PC with Raiden V: Directors Cut. Does the series still have it’s pull or is it just another out of date burn out?

Never played Raiden before? Well aren’t you in for a treat!. As mentioned previously Raiden is one of the pillars of the Bullet Hell genre. The game starts off with you picking 1 of 3 Raiden aerial units then taking the fight to the alien scum trying to wipe out the world, avoid the bullets and rack up major some major scores to flaunt online, pure arcade experience.

So what separates this from all the others?, First off it’s one of the few with this purity of the genre available on the Playstation 4 (alongside Ghostblade HD), it’s one of the longer Bullet Hell experiences around & it has one helluva narrative!. There are more features but I’ll address them in due time, time to fly over to the story.

Bullet hell shooters usually have some kind of a story, like a call back to the old days where the games required that little hook to entice pennies from your pockets, Raiden V is the exception to this rule. Raiden V’s narrative is not only the games story (duh) but it also takes up a large chunk of the screen and the games audio.

The story is fairly interesting but really should of been kept to the odd line in gameplay and just pre-mission cutscenes, the game will prattle on nonsensically constantly and intrusively.  It’s a bizarre design choice especially in a genre which requires the utmost attention and you have some military general discussing his favourite food…….yeah.

Visually Raiden V is top tier, it’s bright, it’s colourful, full of destruction and grips you by the retinas, just like any good game of the genre should do. It features 3D background which when the game is running at a normal speed are nice to look at, the game unfortunately has “Sonic Syndrome” at points. 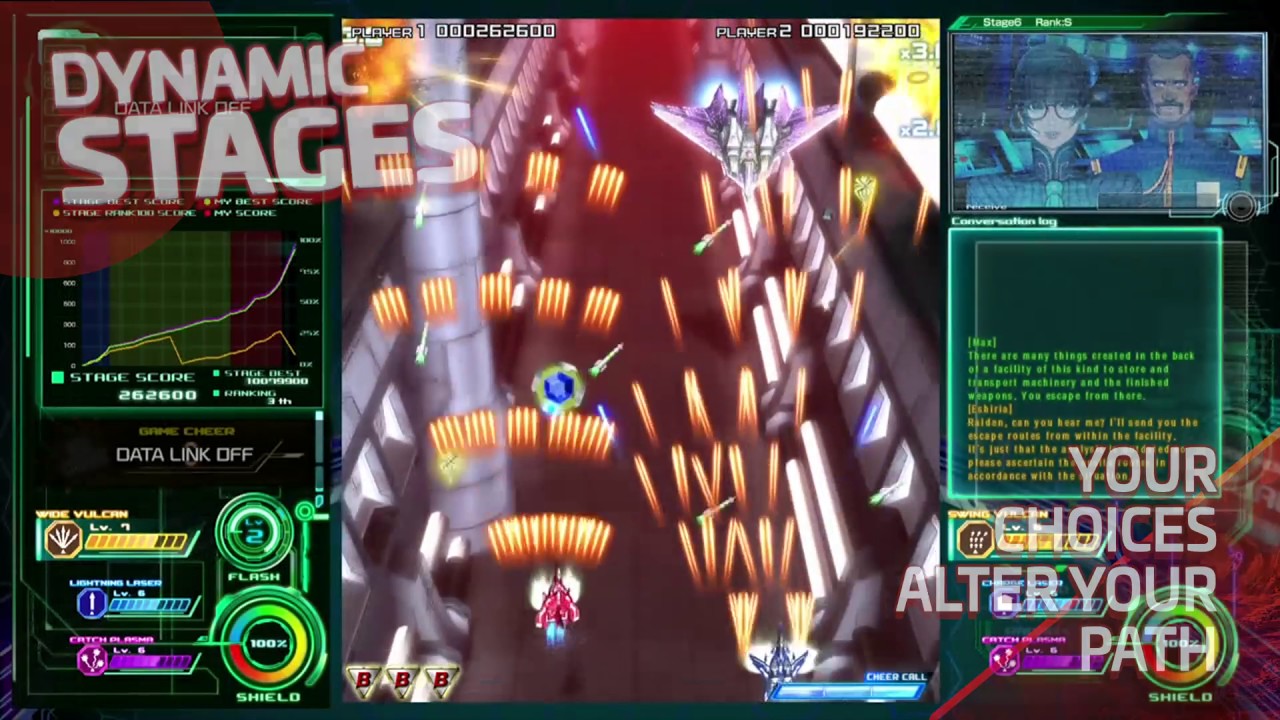 What I mean by “Sonic Syndrome” is that the game has sections where you are “Speeding” across an ocean for example, this tends to blur the background somewhat but it also adds to the visual strain on your eyes when avoiding tiny bullets.

I do feel I have to mention the game is very visually intense, there is a lot going on with the screen, not just the gameplay but the text box, cheer box, upgrades, health and score, it’s a very cluttered HUD which can take a while to adjust to .

Raiden V features an awesome soundtrack really suited for the genre ranging from Operatic, to techno and even blistering rock tracks, I adore the soundtrack and that I’m guessing is why the physical version comes with the OST. The Voice Acting despite prattling on and detracting from the experience is quite well done it’s just a shame it’s really out of place.

So you want to take it to the aliens do you?, Well you have the choice of 3 Ships with the usual Fast, Powerful and Midrange selection, then you have to pick 3 attacks from 9 different choices to truly tailor your butt kicking experience. The game then throws you straight into battle, dodging bullets, scoring high and blowing everything up in glorious HD, it’s a basic concept but highly addictive, especially when you try and best your scores or finish the levels without taking any damage.

So lets talk Cheers!, No not the TV Show but the new feature Raiden V has brought to the table. As you go along your merry way laying waste to the aliens you’ll be given various tasks I.E Kill 40 enemies in X amount of time, completing this objective while online will send it to other players who can tap there “Cheer” button helping you build a meter for a special attack, naturally you do this back on the left hand of the already cluttered HUD. 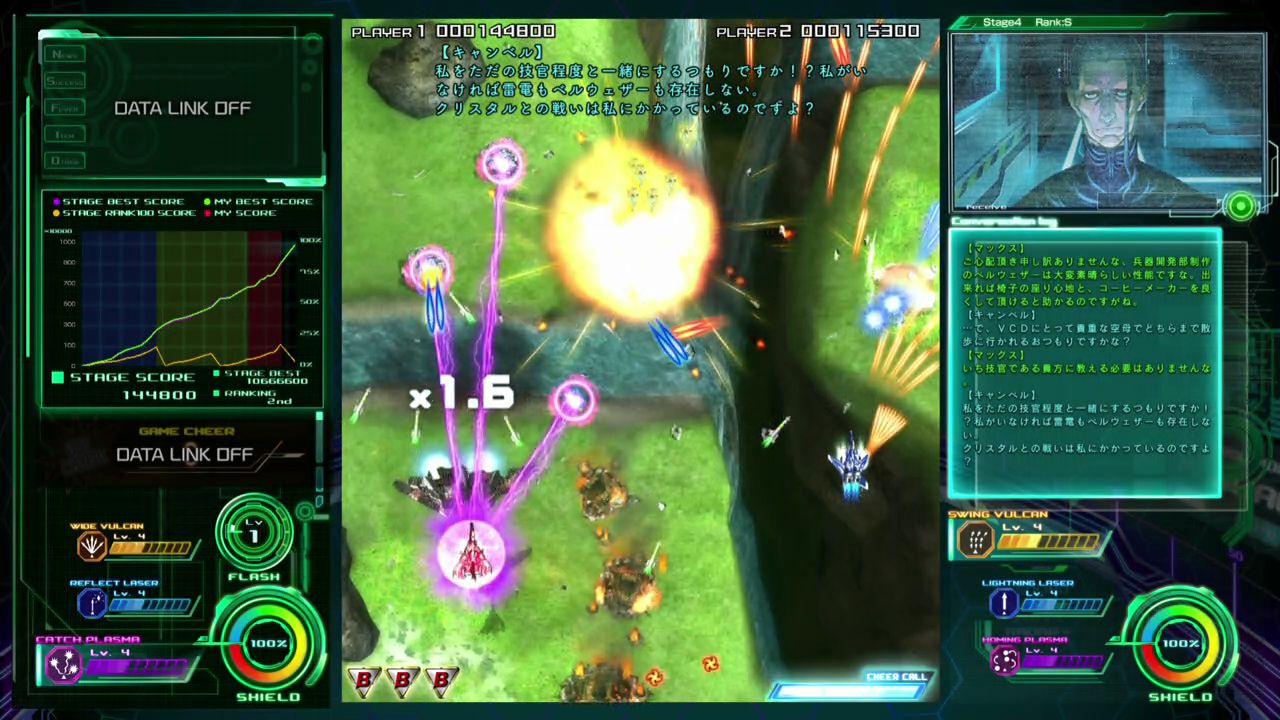 With the game being dubbed ‘Directors Cut’ you have to wonder what they added from last year’s release, well first off it’s couch Co-Op which is puzzling as to why it was left out originally. The other major addition is the inclusion of a few extra levels which puts the Story run time to over an hour making it one of the longer Bullet Hell games I have played.

Raiden V: Directors Cut also features modes such as ‘Double Play’ where you can control 2 ships at the same time, same screen co-op, Boss Rush & a Gallery for viewing concept art from the game.

Raiden V: Directors Cut is in the nicest way, such a hard sell to casual fans. I am a fan of the Bullet Hell genre and relished the chance to play this and it really hasn’t disappointed, it has enough content and challenge to make me happy, a goofy intrusive story which has peaked my curiosity mid death, a connected experience, smooth HD graphics and some quality couch Co-Op. On the other hand if you aren’t a fan of the genre it has a high asking price for an entry game & it’s smothered arcade appeal which seems to be dying in gamers lately which really effects how much you’d get out of the game. 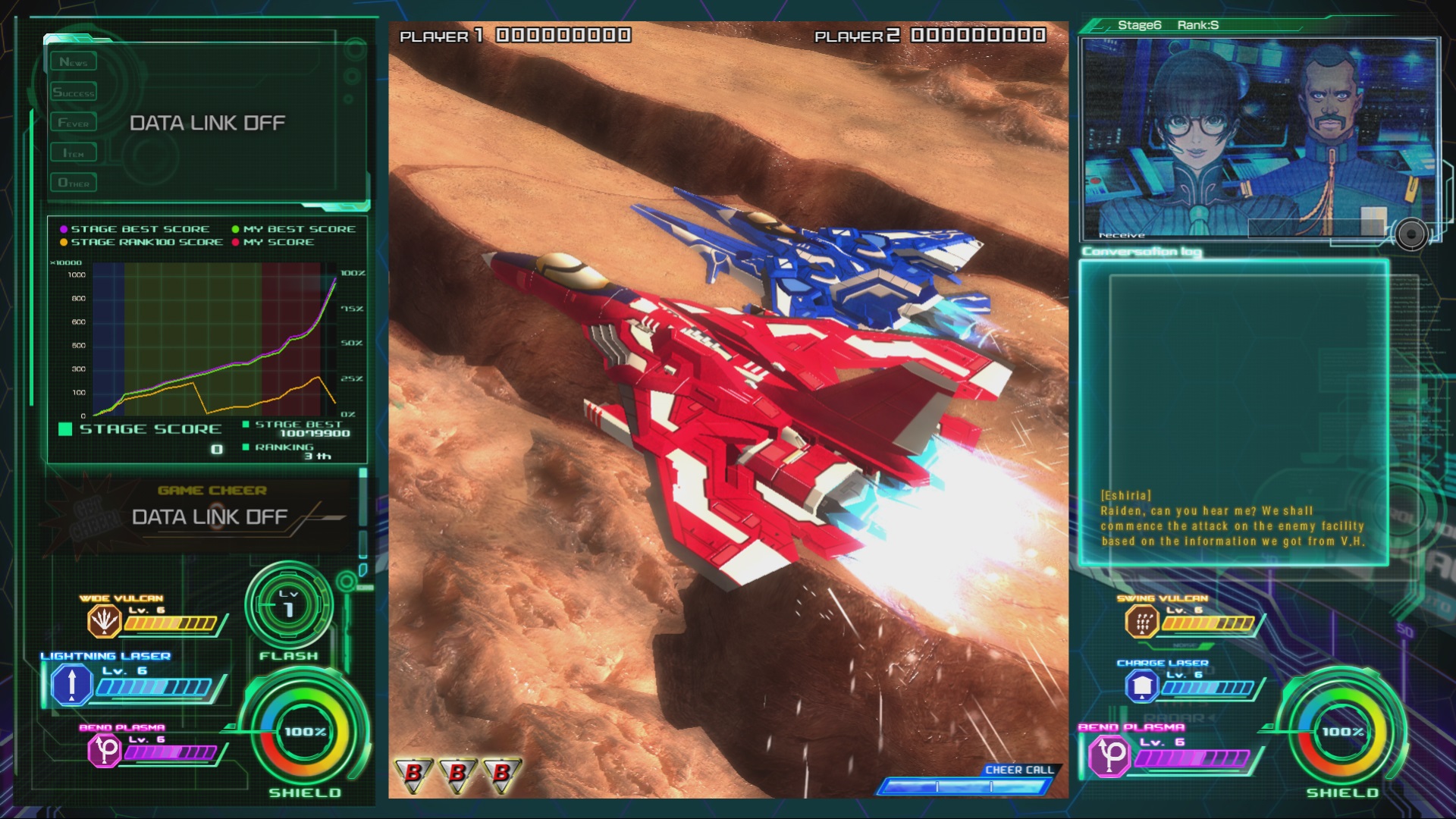 If you’re a fan of core arcade experiences you’d be hard pushed to find a purer more intense experience on the Playstation 4, Raiden V hits all the notes to be a true contender of the genre. Those with limited exposure to the genre or need more AAA story filled experiences should look elsewhere.