Today we are looking at God wars from developers “Kadokawa Games” recently published here in the UK and other European territories by NIS on June 16th 2017. God wars is the latest title from Kadokawa utilizing turn based tactical combat and Japanese folklore for its storytelling. Is it the Natrual progression from Doctrine or another flop? Read on to find out.

Set in a word influenced heavily by Ancient Japanese folklore God wars sees you follow Kintaro and princess Kaguya along with there friends as they fight against foes, gods, demons and there predetermined fate itself. The story itself is a cross between Kojiki (The oldest collection of myths about the origin of the four home islands of japan) and the Shaka chronicles (Buddha). Shall we take a look at how interesting history class can be?

In order to appease the gods angered by humans neglecting ancestral spirits and the destruction of nature caused by the reliance on metal and technological advancements Queen Tsukuyomi sacrifices her child Sakuya inside the mouth of mount fuji before imprisoning Sakuya’s younger sister Kaguya inside a bamboo seal and disappearing. The story telling itself keeps things moving at just the right pace of combat and progression however I have to admit a basic understanding of Japanese folklore is going to go a long way and even then there are likely some parts that will go over a few players heads. Though the game does try to keep it simple and explain whats going on the deeper lore and that, that is just presumed to be common knowledge could leave a few lost without a jargon buster. (failing that there’s always google).

The art of war

To move the story forward we have a tactical battle system relying on turn based combat that sees you take turns to move around a map made up of individual grid sections with a isometric viewpoint all while using the terrain to your advantage allowing even difficult battles to become a breeze or the simplest becoming painfully punishing if you make a mistake. 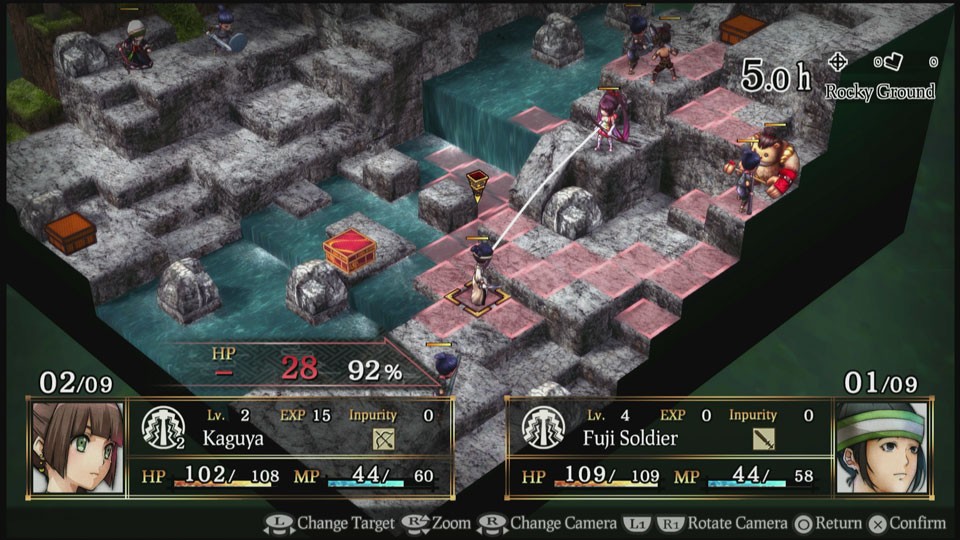 Overall it’s an easy to use system and doesn’t get bogged down by needless mechanics, Any fan of the old classic that is Final Fantasy Tactics will feel right at home in fact any player of TRPG should be able to pick up and play with little to no issue. I have to say while it doesn’t do anything to truly break the mold sometimes trying to innovate doesn’t mean you’re better and the classic route is just the right fit. (Here’s  looking at you Natural Doctrine). 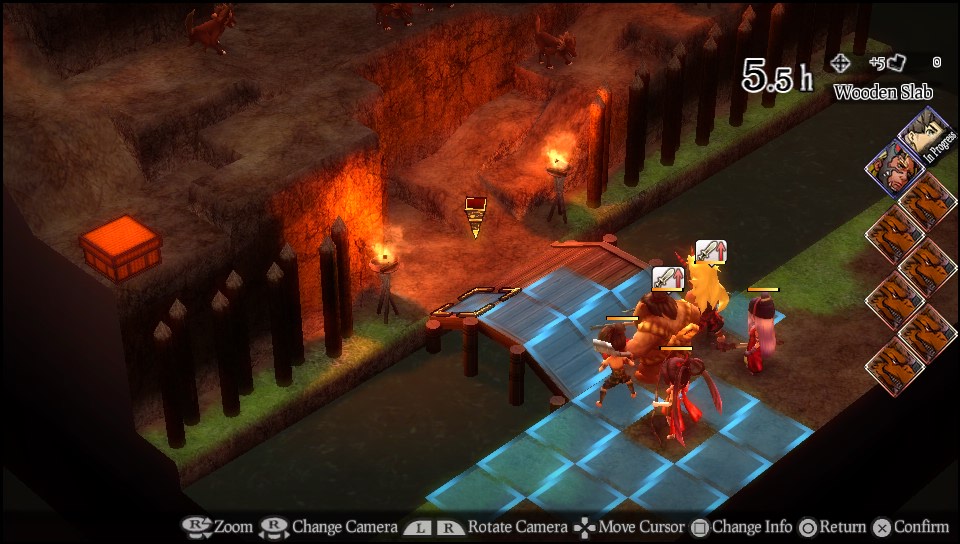 To aid you in your many battles the game offers up to 3 classes for each party member, Each class has 10 ranks and only the first 2 can be freely changed while the 3rd is fixed.
Main – your main class determines your stats, equipment and grows fastest.
Sub – allows for use of a second set of skills grows slower.
And finally each member of the cast has a unique class that can not be changed and grows much slower than any other but offers powerful unique skills.

To add to this level of customization there are a total of 19 (non unique) classes broke up into 3 types
Basic – 3 Classes that all characters start with simple but effective.
Intermediate – 6 classes that can manage all parts of the game require little extra skill to master.
Advanced – 8 classes plus 2 gender specific powerful if used correctly but mastery takes practice and understanding. All these classes are useful alone but coupling any two makes for a strong party member. The whole job/class system is effective in itself and and using it effectively will become second nature very quickly. 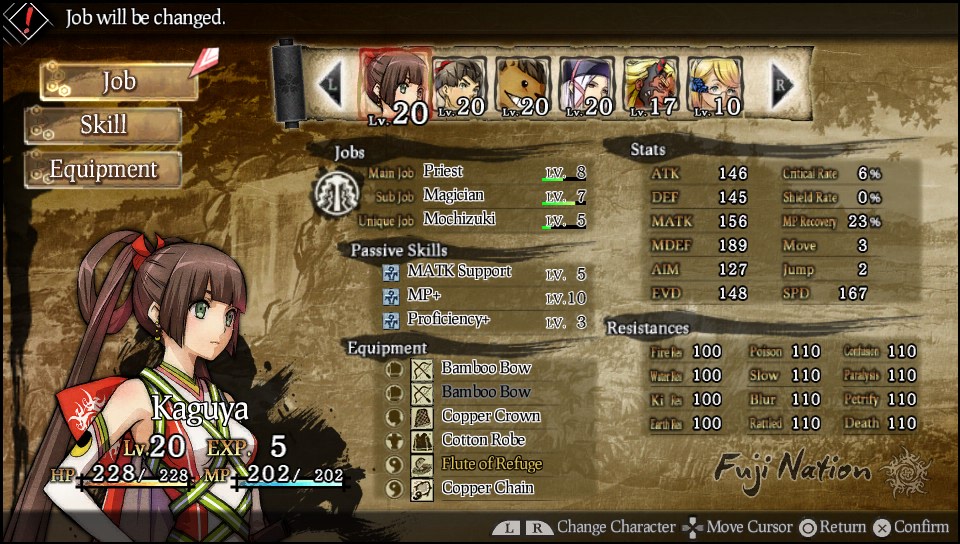 Life is a tapestry

Graphically the game is unlikely to win any awards in the current climate of the gaming market as it’s far less polished than most titles releasing even on handhelds. God Wars seems to have taken a step back to the days of the PSP while a lot of gamers seem to see this as some sort of insult I personally think it works better for the genre with the focus more on the story and game-play allowing for a more enjoyable experience. While I admit that more modern visuals are always a nice addition previous attempts at applying these to the genre seem to cause them to be a little lackluster at the least and leave a desire for the tactics games of old, Either down to nostalgia or simply the fact it just works If you can ignore the next gen graphic twinge you should have no problem enjoying this title and its throwback to the good old days style. Other than this the only thing of note one way or the other is loading screen make no sense at all there either very short or annoyingly long even when loading the exact same scene with some taking a few seconds and though rarely some taking a much longer. 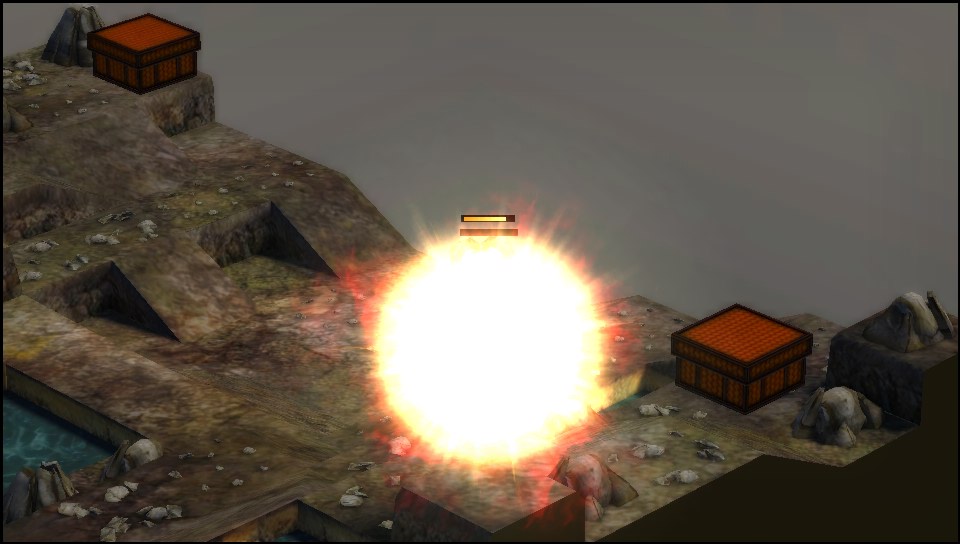 Most of the games audio I have experienced so far seems to tick all the right boxes from placement all the way down to it simply being the right choice for the scene. With this said I’m am not a fan of the English VA it seems to lack the depth and emotion that the Japanese VA conveys more effectively fortunately you can switch between the two freely from the menu.

Overall God Wars manages to do something I haven’t seen with tactical games i have played in recent years, Strike the right balance in story, combat and nostalgia all while keeping the mechanics simple enough for newcomers to the genre and allowing those with more experience under there belts to enjoy it. The lack of polish will perhaps put of some fans but urge you to overlook it you may just be surprised just how much better art can look when you take a step back.