Review
7/10
Today we are looking at God wars from developers “Kadokawa Games” recently published here in the UK and other European territories by NIS on June 16th 2017. God
Read More 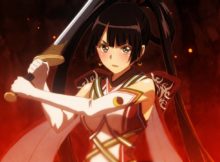 News
NIS America has announced a delay to the release of God Wars Future Past. Originally due to launch for the PlayStation 4 & PSVita during March in the
Read More

News
NIS America has released a new trailer for God Wars Future Past. The trailer offers a story overview for the upcoming strategy RPG, which will see players sample
Read More