There’s a line in Hot Fuzz that has always stuck in my memory, where Simon Pegg’s Sergeant Angel is talking about a police pedal car his Uncle Derek bought him when he was little: “I never lost the profound sense of right and wrong I felt at the wheel of that pedal car. I had to prove to myself that the Law could be proper and righteous and for the good of humankind.” That’s the closest I can come to describing the feeling of playing Beat Cop. Sympathy rapidly evaporates as you turn into RoboCop’s parking-ticket-dispensing cousin; one minute past time? Ticket. Tyres worn down? Ticket. Just be thankful I didn’t call for you to be towed, sunshine. Of course, now and then, with a $300 alimony payment due to my ex-wife, a few tickets were surreptitiously thrown into the gutter in exchange for some, shall we say, civil recompense, but that’s just the way the world works.

Beat Cop is indie studio Pixel Crow’s first foray into the market, and the Polish development duo have stated that their aim is to focus on cross-platform availability, with a pixel art style. Whilst it’s essentially a basic point-and-click affair, giving out parking tickets and catching thieves, the simplicity of the concept has allowed for a strong focus on building a world. Though there were only five chapters available to play, I can already tell you that the owner of the local diner has a soft heart beneath their business-like exterior, one of my colleagues is a love rat, and that certain local shopkeepers are not all that they seem. Decision making is crucial, and though you will find yourself quickly becoming immune to excuses, you’ll probably surprise yourself at how easily a bribe or two just becomes part of the day. So, too, will you find your relationships with local underground elements being more complex than you may have expected.

From the get go, I loved the title music and intro trailer, with the music bringing a very 80s cop-show feel to proceedings. A lot of the written dialogue is quite tongue-in-cheek, and you may find yourself sometimes wondering how much is meant to be taken seriously. We’re told, for example, that there are ‘no normal Italians’ in the city – implying that they are all mafia – and residents routinely complain about the number of ‘blacks stealing things’. Perhaps the low-fi format loses a little in translation here, but then I suspect that this is the entire point. 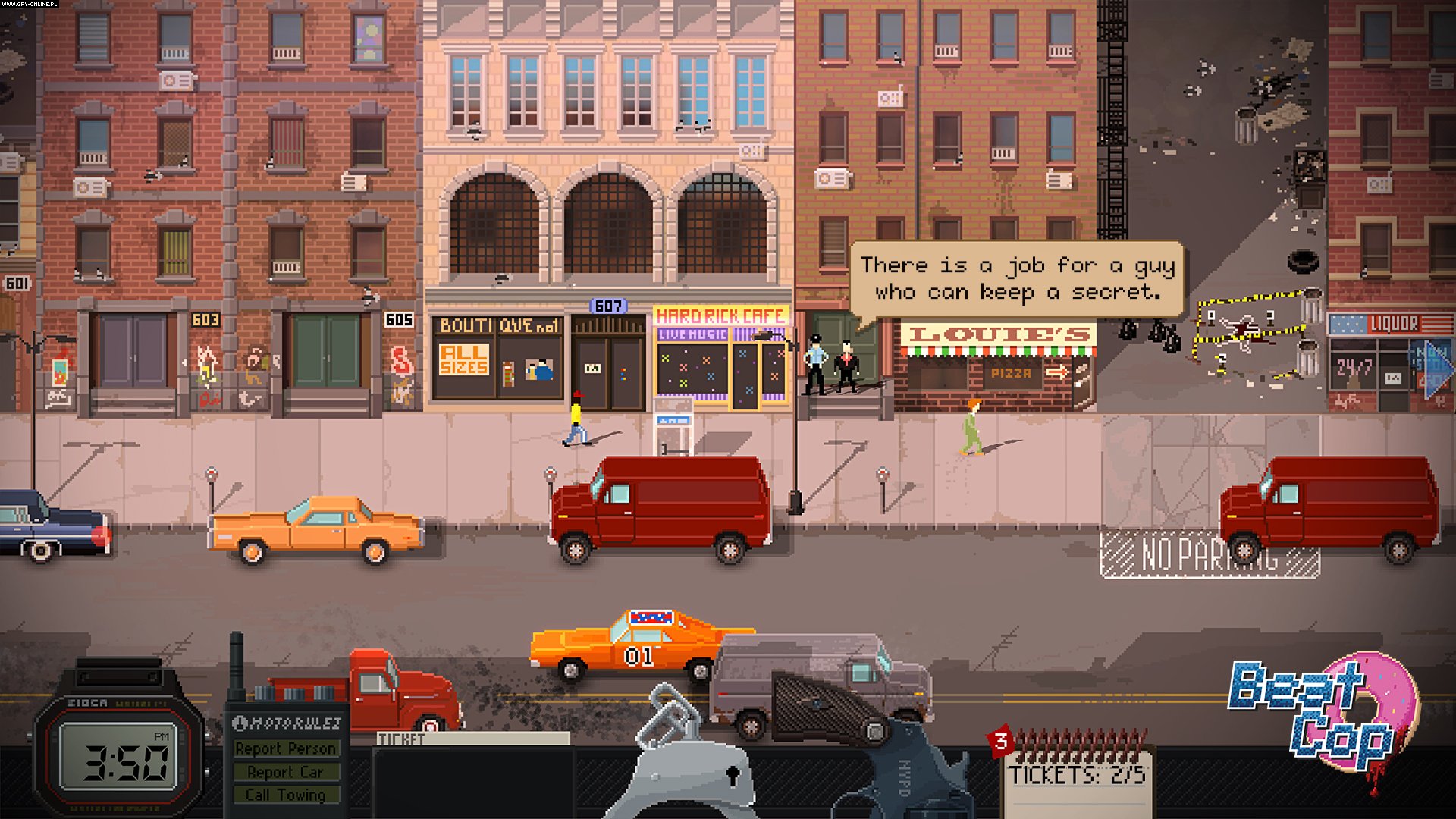 As I said before, the gameplay is very simple, but you’ll soon find yourself immersed in the action around you. The hot bar, always onscreen, benefits greatly from this simplicity. Here you can access all of the items you need, from your notebook to your radio to your gun, though I wasn’t occasioned to discharge my weapon. It is really refreshing, in a world of increasingly myriad menus and sub-menus, to have everything available onscreen.

The day – each one representing a chapter – does seem a little frenetic, particularly as your objectives rapidly stack up, and a slightly longer time cycle for your shift would really let you submerge yourself a little more into the world. Though this is mainly a matter of personal preference, I really feel that there was so much content that I didn’t have the opportunity to discover due to needing to meet my daily ticket quota and run after thieves. It’s understandable that there needs to be a certain atmosphere of not having enough hours in the day, but even a few minutes extra would improve the experience immeasurably. 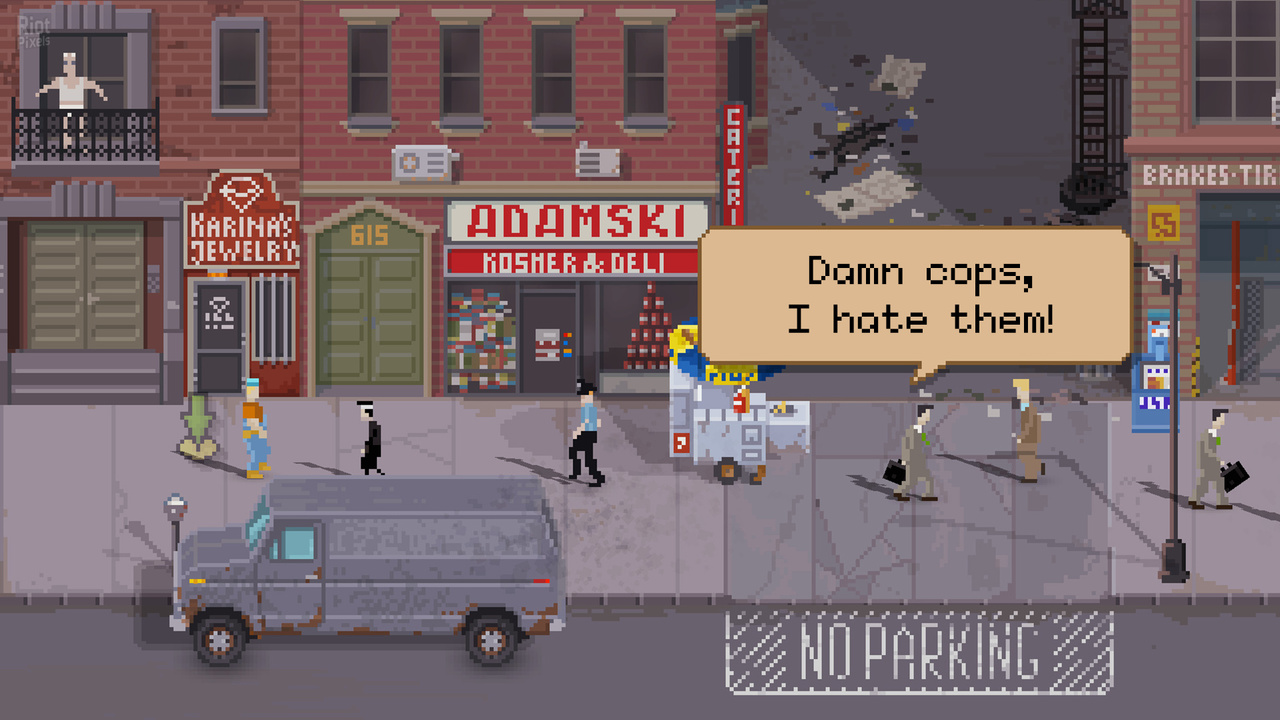 At the end of each day, your relationship with various factions is reported, and this is the main draw for replayability; will you be a model police officer, pleasing your superiors? Will you broker deals with the local gang or mafia? Will you try and play everyone off against each other? For my play-through, I gave short shrift to criminal elements, though that’s not to say that I didn’t take a handy tip-off or two from the mafia to search a gang van or break up a meeting. The stories that began to unfold seemed directly influenced by my actions, and you should definitely to look to re-play this game in more than one way to get the most out of it.

All in all, I’m excited to see what Beat Cop becomes. This is one of those games that can become as complex and deep as its developers want it to be, and I sincerely hope that the world and story line continue to get the attention that they deserve.