Yooka Laylee is a Kickstarter funded project developed by Playtonic games and developed by team 17 for the PS4, Xbox One, PC and soon Nintendo Switch. It’s an open world 3D platformer reminiscent of the old classics, such as Banjo-Kazooie. Will this open world platform find a permanent place among your favourite platformers? or sink to the bottom of your library? read on to find out!

Yooka-Laylee is about an adorable chameleon named Yooka and his faithful bat companion Laylee. The story is a  simple one. Yooka and Laylee are peacefully relaxing one day when their profit book all of a sudden starts to float and shoots off in to the distance. Puzzled they go and search for the book, thinking about the riches a flying book could hold. After some time they come across a peculiar factory named Hivory towers and inside they find a flying page, not long later they find this flying book who informs you that all of its pages, or “pagies”, have been spread across multiple worlds that you can access through the great tome found in Hivory Towers. It then tells you that  “Capital B” and his sidekick “Dr Quack” are on a mission to steal all literature form across the world and gain infinite profit, and they are the reason he got stolen. Now you must regain all of his pages so Capital B can’t complete his mission! 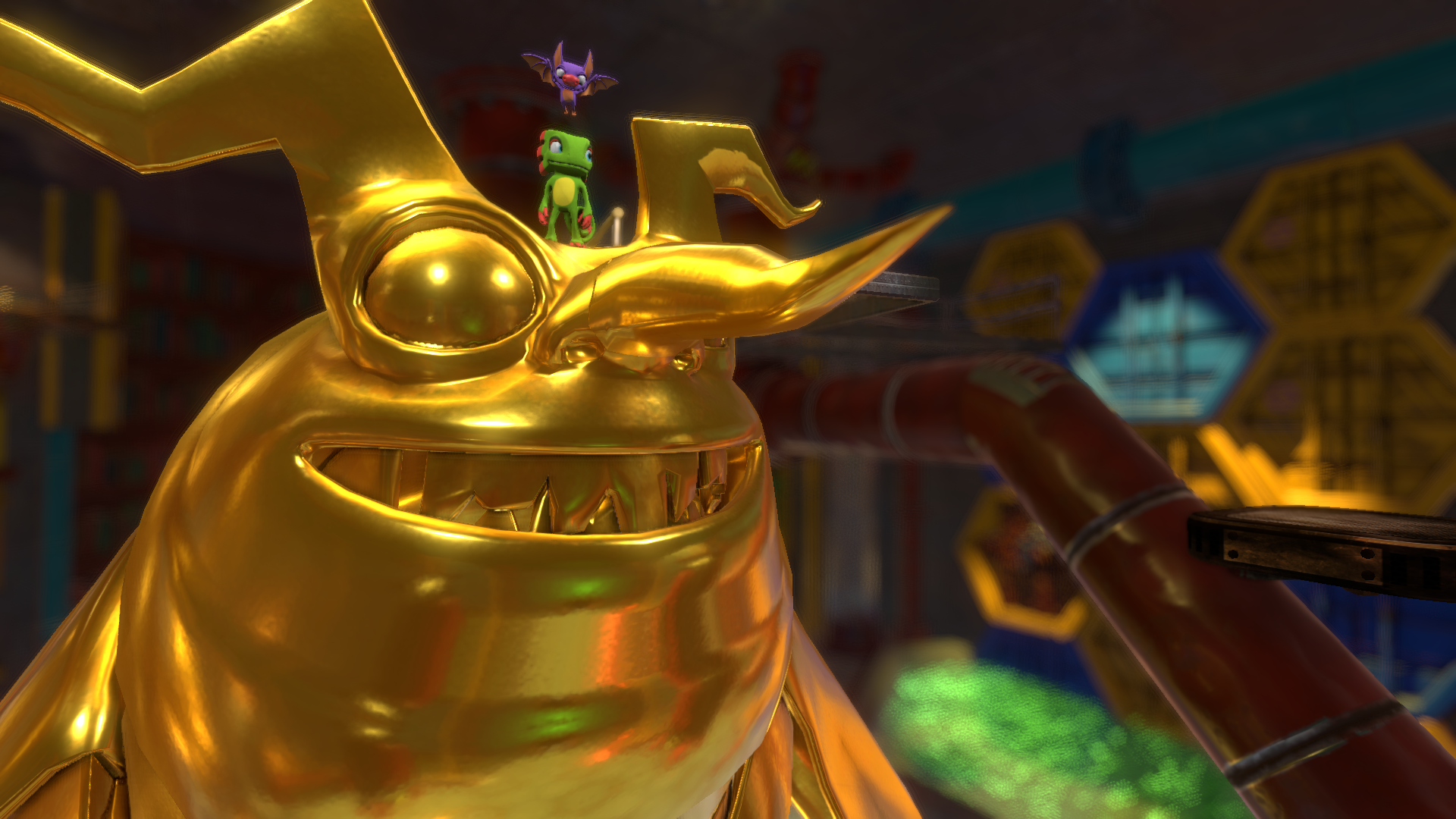 Visually Yooka-Laylee is an absolute treat to look at and to play, its bright vibrant array of colours, cute characters and gorgeous environments will keep you engaged for plenty of time. The animations between zones and in combat are smooth and flow perfectly into one another, which makes actual gameplay feel very well done. I never found the visuals to get tedious either, each different world always left me pleasantly surprised and wanting to explore more.

The audio is also fantastic. The soundtrack is memorable and fits in nicely with all the different worlds and environments. The sound effects also help create that additional depth that really improved the overall enjoyablility of the game for me, the only negative I have is the voice overs sounded like the same sound just recycled over again and again – but I was informed that this is reminiscent of the old school platformers so I haven’t looked into it any further and now I’m starting to quite enjoy every auditory aspect of the game! The Gameplay in Yooka-Laylee is nothing short of fantastic. Players start in a simple hub area where you can travel to multiple expandable worlds though ‘Great Tomes’. In each off these worlds there are tones of collectables such as quills (an in game currency with over 1000 to collect in total) There are also all the pagies to collect (over 140), as well as an array of other things such as ghosts friends to meet, play coins to gather and more! In the worlds the main objective is to obviously collect all of the pagies. You can do this in any way you see fit as the game worlds are open world. These beautifully crafted worlds are also expandable by using paiges that unlock new areas and items!

To me, collecting the paiges and quills was fun – but I had the most fun exploring each world and finding all the quirky characters and the mini-games they challenge you to! For example you can find rex’s mini arcade machine, that you can hop on and play a variety of retro games for prizes! There are also plenty of other mini games, such as racing clouds and shooting challenges, that in turn will reward you! 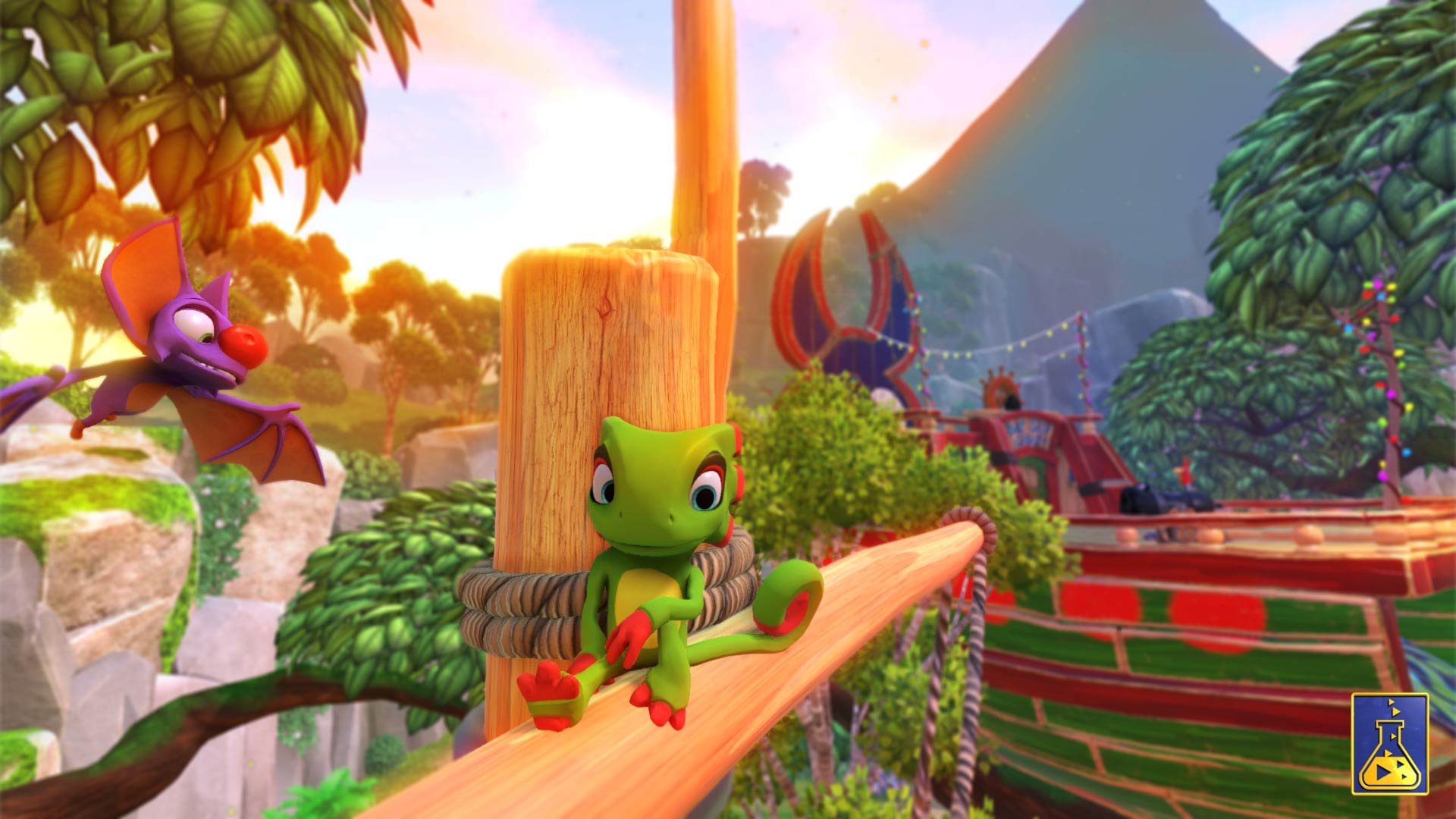 However all these mini-games cant be completed immediately as you will need to buy specific upgrades from Trowzer the snake with your quills. To me each off these moves seemed purposeful in game as they all had there advantages and allowed me to further my exploration!

Another fun element to the game are the aptly named play tonics. These are essentially game modifiers that unlock after you hit a certain milestone in the game, such as shock 30 enemies or collect 100 pagies. They all provide interesting modifiers such as increased movement speed or harder hitting moves! Apart from the main story there is also a single player and two player mode where you can replay all of the mini-games from the main story at any time! 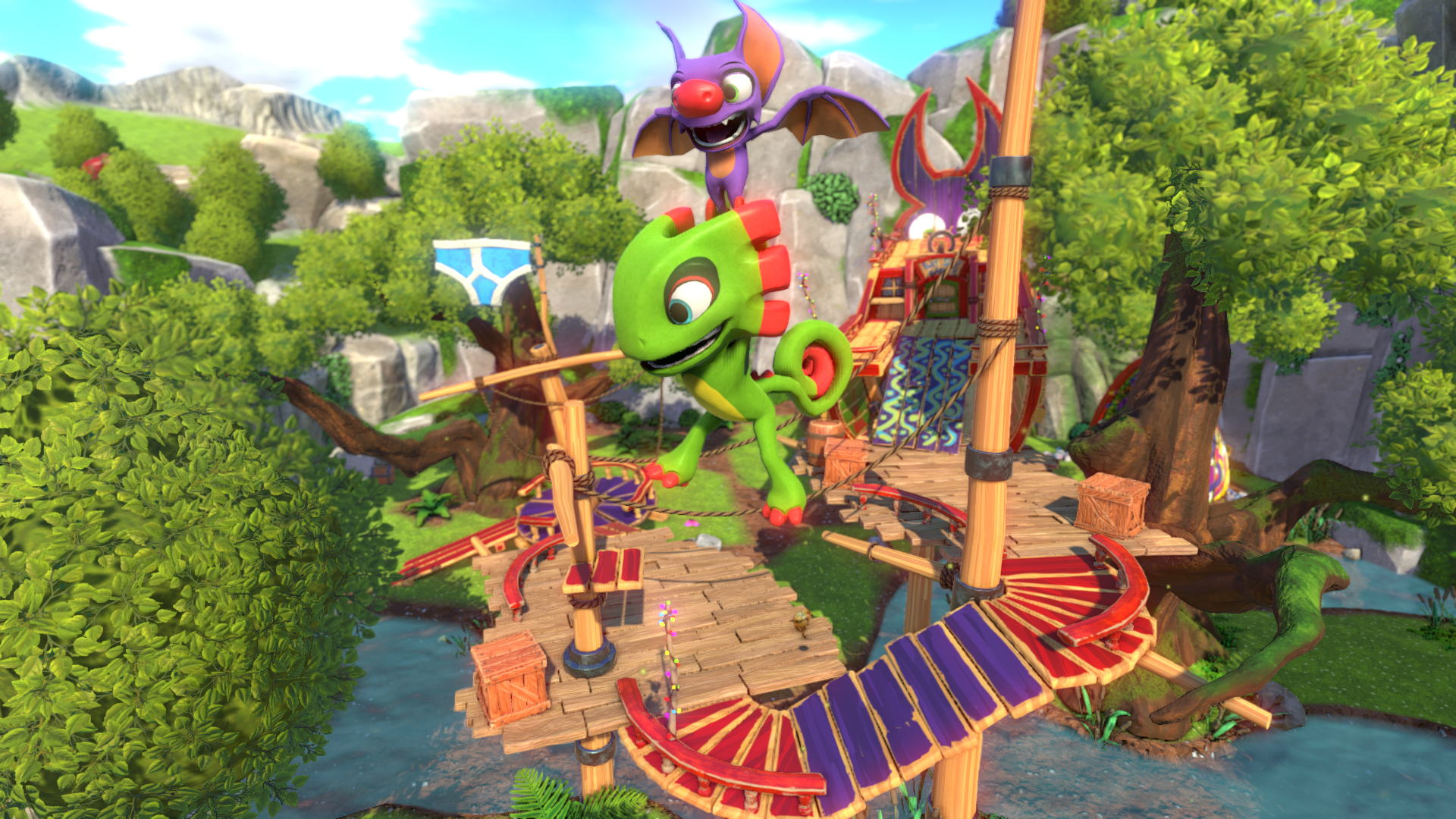 Overall, I truly enjoyed the time I spent with this platformer as Yooka-Laylee are definitely a duo to remember. By no means a perfect game, but pretty much every aspect of the game was thoroughly enjoyable. I can see myself playing this for the long run. If you’re a fan of 3D platformers, wacky characters and a tonne of collectables items – then I highly recommend this game!