When Sony jettisoned Evolution Studios, those like myself feared the worst. Having spent so many hours over the years on the likes of the WRC & Motorstorm series, that racing pedigree could’ve been lost. Thankfully Codemasters brought some of the studio into their company, and now a couple of years later we have Onrush. Looking like a mix between Motorstorm and Burnout, has it been worth the wait? Lets take a look. 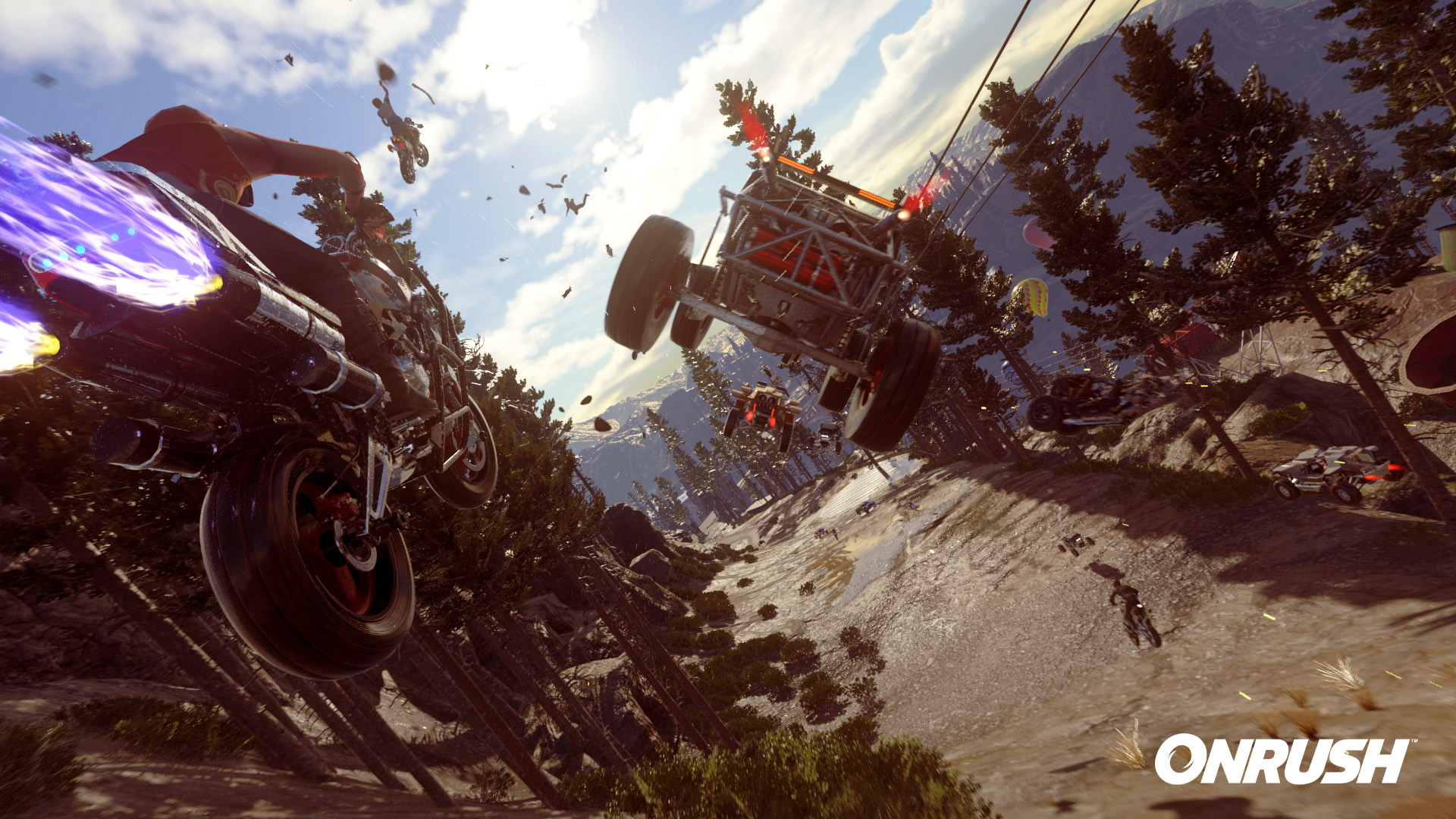 Onrush takes on a similar setting to the Motorstorm games of old, with the focus settling on the first major Onrush festival that sees the biggest thrillseekers around coming together for a spot of merriment. The Superstar mode is the main crux of the single player as it eases you into the way the game plays whilst levelling you up to get some unlocks. There’s always an objective in each race that adds to your point tally, which then opens up new events with the occasional cosmetic as a bonus. Once you’ve done enough offline you can then head online. You can either do some Superstar mode co-op with friends, or head into some PvP matches with both teams filled with human players.

In a similar way to Overwatch, ranking up nets you a loot box. Now hold fire. There’s no performance benefits at all in the boxes, just cosmetics like vehicle skins 7 variations to the model – hence the similarities to Overwatch. Some cosmetics can also be purchased using the coins earned during races. There is also a ranked mode currently unavailable, so the developer clearly has plans for future support with the game. The main variety for the games comes with the race modes, which range from checkpoint chasing to trying to hold onto zones with your team, and the numerous vehicle classes. Vehicles range from fast & agile motorbikes, all the way to unwieldy battering rams like the Humvee. The differences don’t just end there though as each vehicle also has its own abilities that will supplement your teams when you hit the track. Your early time with the game will be spent getting to grips with all these different abilities, the game does ease you into it, and eventually you’ll settle on at least one or two classes. 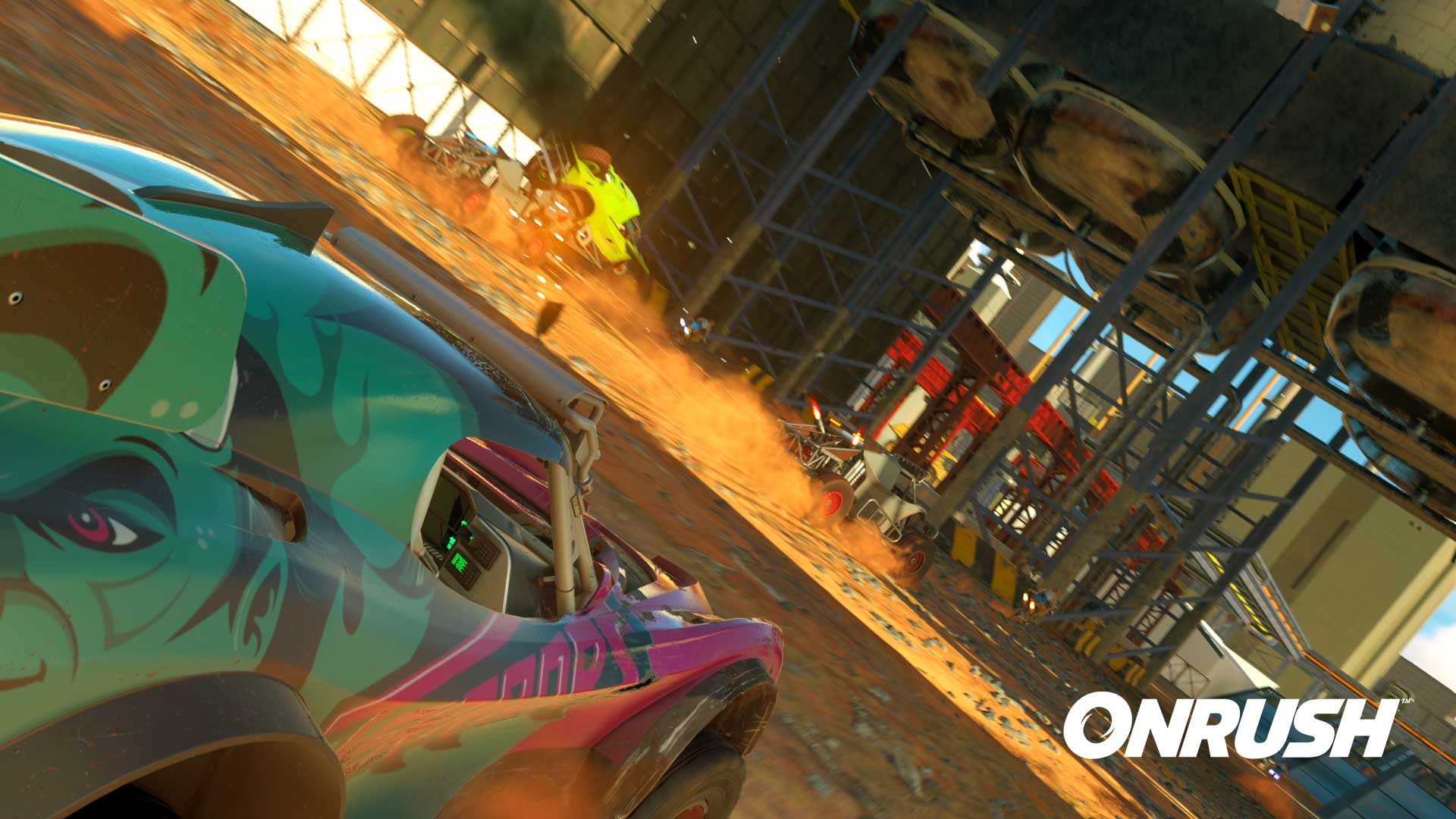 Graphically Onrush is just as bombastic as the festival sounds. The Motorstorm vibe carries over to the presentation, only things are a little less grimey & much more colourful. The environments look fantastic, though the dynamic nature of the lighting doesn’t always help, with big sweeping vistas and lush detail making the most of the engine used. HDR makes the cut for this game, and it makes the most of the expanded colours on offer with a vibrant display almost all the time. Plenty of detail has gone into the vehicles, and the different models for each class give plenty of variation. Particle effects are top-notch too, watching a fellow racer spin through the air in slomo with shrapnel blasting off after a crash is fantastic. All of this is done within a performance profile of your choosing, you can either prioritise framerate or resolution – even on a standard Ps4. Framerate will net you locked 60fps on Pro at 1080p with the standard console around 45-60fps at 900p. Switching to resolution mode locks the game at 30fps at around 1600p on Pro with the Ps4 at 1080p. Its the same for Xbox One/OneX, except the standard Xbone is currently missing the framerate mode at time of writing.

The audio side of things is a bit of a mixed bag for me, and this mainly comes down to the soundtrack. There are a few notable inclusions, and overall it does have a motorsorm feel to it, but there’s just too many tracks that fade easily into background. It’s really inconsistenct with the overall soundtrack, but it does at least fit the vibe of the game well enough. The other side of the audio mainly focuses on announcers, there are several altogether, that commentate on the moments within the game. It’s a neat little touch, some of the stuff said is a little cheesy-pie, but it does add to the overall vibe of the game the developers are going for. Overall the presentation is fantastic, the graphics are top-notch irrespective of the system played on, with only the soundtrack choice really dulling its glow at all. 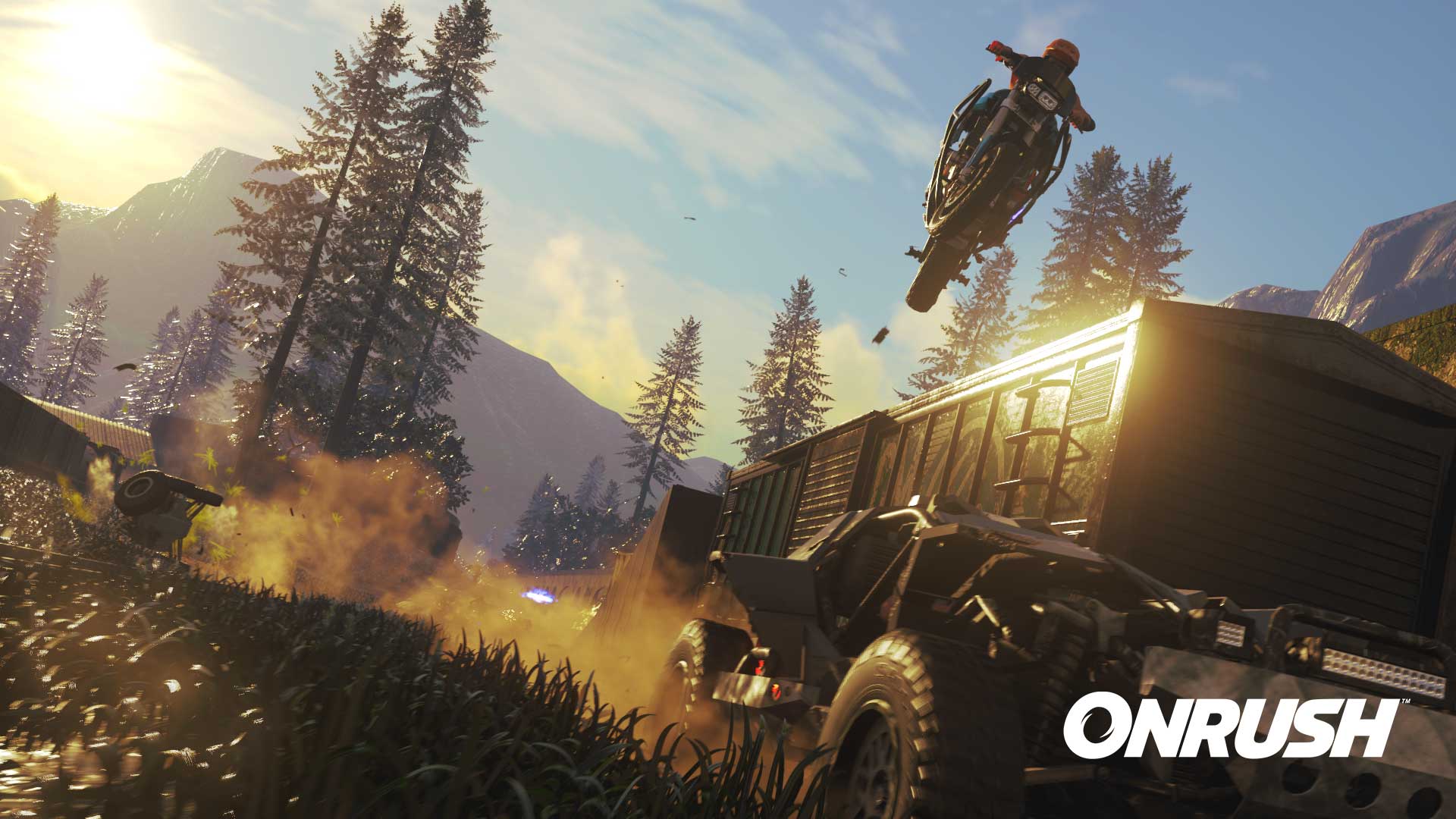 It’s safe to say that Onrush is like a cross between Motorstorm & Burnout, though not quite a racer like those series. It sounds an odd statement, a racing game that’s not really a racing game, but the gameplay has more of a class based action feel to it due the way each vehicle’s abilities differ – think Overwatch on wheels and you’ll get a clearer picture. The game likes to keep the pack together, the spawning fodder fills out the grid but is mainly there to fill your boost, which certainly plays into the overall gameplay. Most modes on offer focus on teamplay above all else, and will see you having to maintain boost or sit within a king-of-the-hill style zone for example to earn points with your team. There’s no room for lone wolves if you want to win. Sure everyone can pick a Titan and just smash the other team to smithereens, but the lack of pace & agility could still cost you the game when your team lacks any support from particular vehicles. Onrush sure is a refreshing take on the genre with its balanced teamplay, with its fast & frantic pace keeping things interesting, but I do have at least one gripe with the game.

That gripe pretty much comes down to the lack of any actual racing, there isn’t even a simple mode for a basic race. The closest the game gets is with the checkpoint based mode. In this you pass through checkpoints which add time to a countdown, first team to hit zero loses. Here you can race to be first through the checkpoint to get the biggest boost, but in the end it still doesn’t matter. If your team doesn’t pass through too then your boost won’t be enough to win. A simple race mode could be added later, Evo could even work it into the games team based gameplay, so it’s nothing major really. I guess the only other gripe I have is the light feel to the game. It’s certainly accessible and makes it easy to get a grip on the game, but the handling does feel a little loose at times because of it. At times it almost feels like you have no control over your vehicle. I suppose that could be due to the fact you spend a lot of time in the air? Still, the vehicles could’ve had a little more weight to them at least – even the big Titan seems to lack it somewhat.

Onrush is a racing game that doesn’t act like a racing game and shows that Evolution Studios are still alive & kicking within Codemasters. There’s a couple of gripes, like the lack of actual racing funnily enough, but there’s no denying that the vehicle based team gameplay aimed for has been nailed to a tee. Not quite the spiritual successor to Motorstorm I’d hoped for, but a refreshingly unique take on the arcade racer that shines in all the right places. Recommended.