Horror, the Genre all about impact and lasting impressions. The genre that makes you anxious before anything has even begun. In all media outlets there has been some prime examples of this, especially in  video games.

On the flip side of this there are some terrible examples of media using the term horror to define their product. Some are just straight up bad, however though some  just lost their way around the genre. This could be to poor design, storytelling or character choice. 2Dark sits in this group. A good game but due to a few choices in design, it loses what makes horror special. 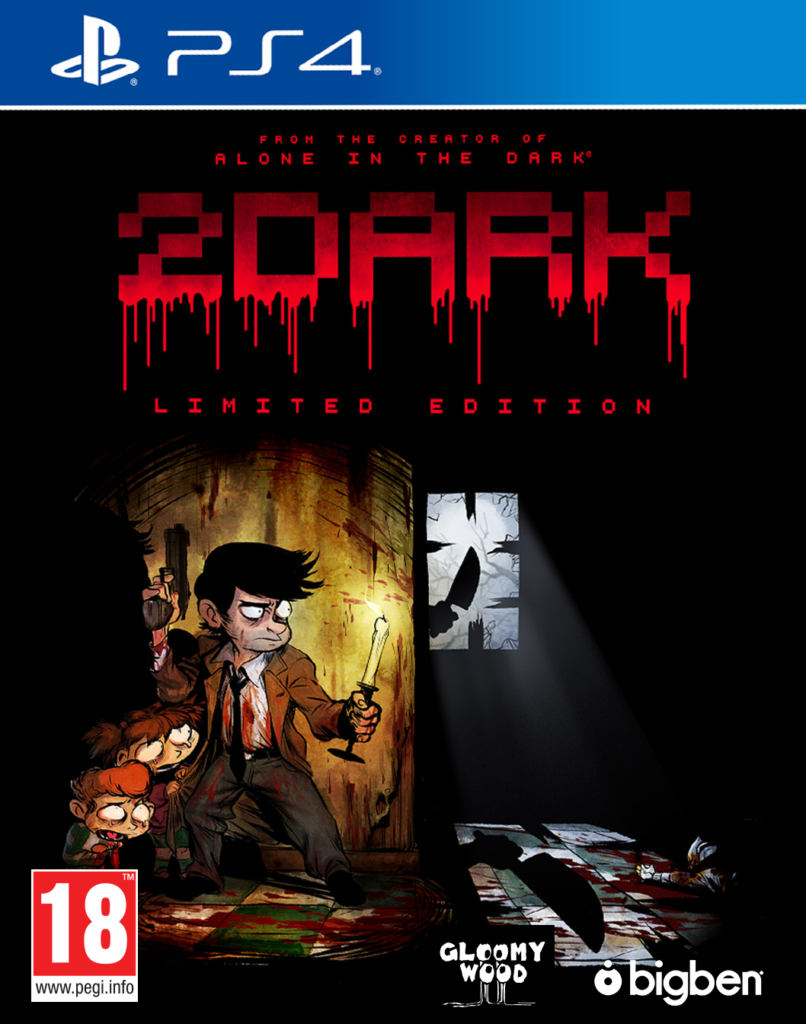 As with every horror flick the story is simple to follow and 2Dark is no different.   It follows a former detective by the name of Mr Smith, who witnessed the brutal death of his with a long with kidnapping of his children whilst camping.   After these events, he moves to Gloomy wood to follow up on a case that has seen many children vanish with the hope that one day he will find his own.

The world of GloomyWood is set up like any horror film filled with cliches that would make players either cringe or smile. The first explorable area you reach is set in a creepy amusement park filled with rats, spiders, death traps and poorly lit corridors.  On top of that there are many creepy individuals along with a creepy clown that wouldn’t think twice to leave you in a pile of your own blood. However though this is where the problem arises; as horrific as that sounds, 2Dark does not sell it to me. The idea of that happening does not scare me but rather frustrate me as I would have to restart the level or from a save point (more on that later). After spending some time with the game I feel that the issue is the character design mixed with the overhead view of the level. 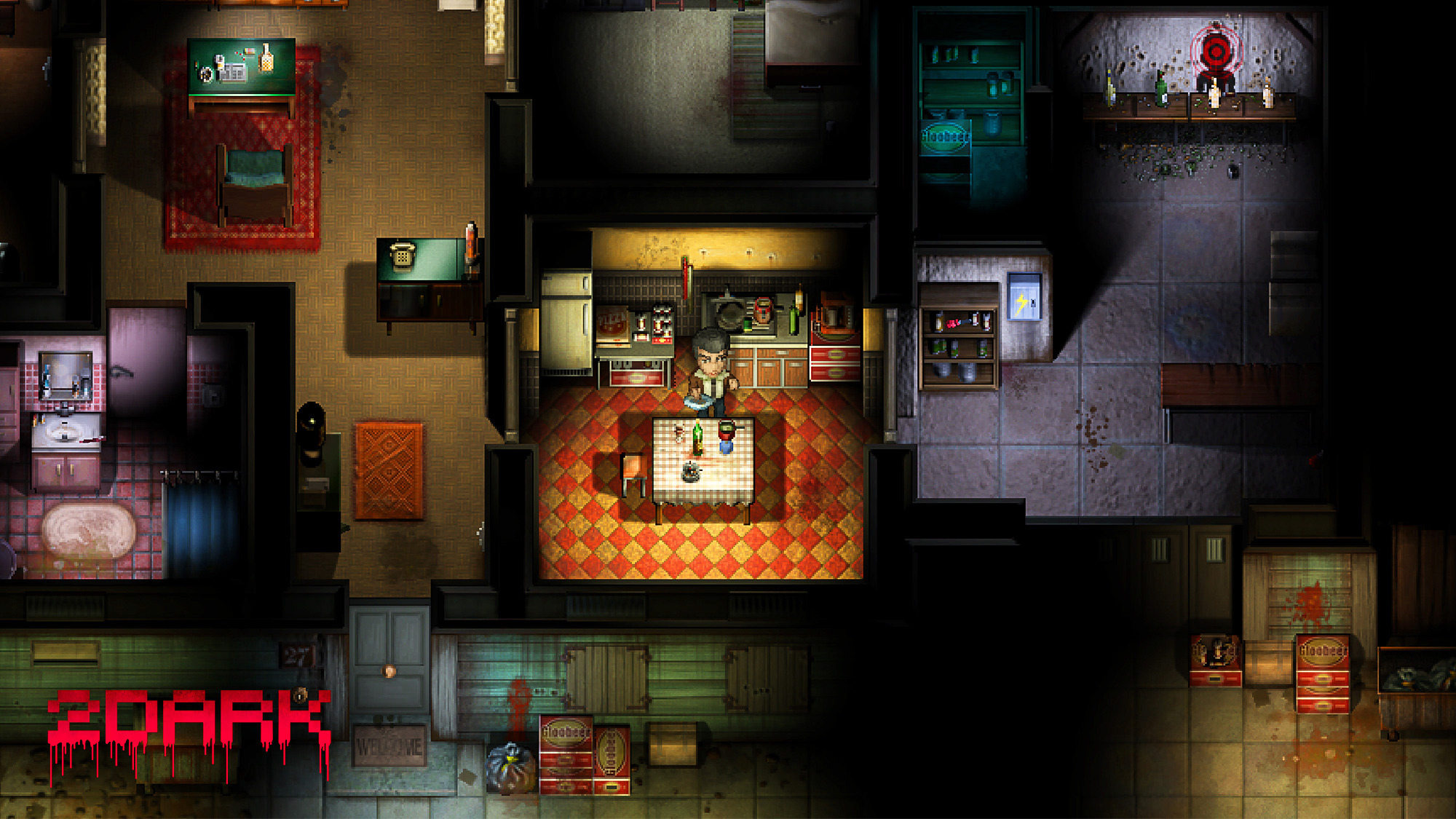 The levels are set up so that you have an idea of what to expect. Between the dark corridors and the sound waves from enemies, the world is set up like a game board allowing you to create a plan of how to rescue the children. However though the character designs are just, well, hard to look at. It is hard to describe but I will give it a go.

Imagine if the Cabbage Patch Kids were made out of clay and then turned into 3D pixel art. Personally I think they look bad and are hard to take serious. They look like they do not belong in the world and they look even more unconvincing in cut scenes. Maybe that is what the designer was going for but for me it ruins anything about the game that made it a horror in the first place.

Even though the horror genre is up front with 2Dark, at its core it is more of a stealth survival game. This is where the game does shine even if the control scheme is clumsy is some situations.

The game is all about sneaking through an area, rescuing children and avoid death. This is achieved through various mechanics such as moving slower, calling out and using items. Moving slower and calling out are systems that can work together but also conflict. Sneaking lowers how much sound you are making but as expected, calling increases it making you more vulnerable to enemies. You can get the children to follow you but approaching them but in some cases you need to call out. It is all about evaluating the situation and then choosing which option will give you the most time to escape. At the end of the day, it is all down to trial and error. With this in mind, there are other areas that use trial and error such as traps and holes that are placed throughout the levels. I am all up for trial and error but it is used a lot in 2Dark and can become slightly annoying after a while.

Now let’s talk about the using of items. 2Dark uses a similar system to classic point and click adventures. Items are collected and either used as is or combined to create something else.

The collecting of items is genius and very user friendly. If there is something of interest in the current room, an exclamation mark appears above you and the item is collected upon touching it. There are no button presses involved and it is very hard to miss things. Using items is a different story. It uses the system of items can only be used if they are in your hand. No issue with that at all but selecting them always seemed a challenge to me. Flicking to the items menu feels clumsy and seeing what is equipped is difficult. There has been many times I have fired my gun by mistake because I thought I had the flashlight in my hand. Combining items suffers from the same clumsy issue and unfortunately this is how you save the game. Combine smokes with the lighter and your progress is saved. As I mentioned before, you restore to this point upon death so if you forget this is the save mechanic (like myself), you will have to start the level all over again. This is nowhere a game destroying feature but rather a great way to get players to manage themselves.

Even though 2Dark is directed by Frédérick Raynes (alone in the dark) it falls of the rails whilst handling the horror genre. Even though the story and world is perfect, everything else lets it down. A few clumsy controls and poor character designs assist in this but within this mess is a good game for those who enjoy trial and error based play. You just have to dig through the cabbage patch to find it.