Grand Kingdom is a tactical role-playing game from Monochrome published in Europe and the UK (thanks brexit) by NIS America on June 17th. There have been some minor delays in shipping due to a mistake with the soundtrack, with the 5 track OST being shipped with the CE over the 15 track OST – however delays have been minimal.

Grand Kingdom sees you take up the mantle of the head of a mercenary outfit in a land torn apart by war, a war ruled by those with the biggest coin purse as solders sell their swords to the highest bidder and knights of honor give way to those pursuing greed and fame. As the head of one such outfit, you and your merry band of sell swords travel the land forming temporary alliances with those that can fill your pockets best, This is the law of the land you have stepped into and most everyone is the same way, doing what they must to survive in a world were trust is only measured by the amount of gold you have.

When starting up the game you’re initially treated to the scenes at the end of one such battle, where you have your foes on the ropes begging for their lives only for your employers to turn around and surrender – thus making your reason to be there void and dropping the price of your foes heads to less than a copper a piece. The foes you just felled soon become friends as they implore you to join the mercenary guild like themselves. The guild is somewhat a middle ground for sell swords of all trades to hang up their blade, fill there bellies and mostly drink when there not working. The guild has rules but no allegiance and while it is home to all, the friends you drink with one night may be your foes on the battlefield the next – as new contracts are formed with one of the four great feuding nations. However while this is playing out as nature of the world the guild also offers work to you making invitation and initiation no small feat. This is were mercenary’s live the high life, safety, food, weapons and drink or so it is seen, However could this only be the start of the dark days ahead for this war ravaged land?

The game has a lot going on all at once alongside the main story with wars breaking out left right and centre, People and leaders needing your help, Challenges from rivals and more it difficult to know exactly were to start or what to do next. The best place to start however would be the game’s story line (simply to ease you in) this part of the game follows your time with the guild, a story line full of twists and secrets as characters grow and the world around you changes, honestly it is shaping up rather interestingly from what iv managed to finish so far and manages to keep pulling me back from seeking coin and glory at war. Delving into the history of the land and the danger that lurks behind the scenes while every nation fights for power and the pawns in their wars uncover the secrets of the once great Uldein Empire destroyed over one hundred years ago.

And so before you know it your journey begins as does our initiation into the guild. Once game play begins you will find yourself on a map with a set number of turns to complete your objective, think of it as something like a game board with each move of your piece seeing every other piece move, these maps contain multiple routes, treasures and secrets requiring you to use strategy to make the best use of your limited turns. Over all its a very straight forward system, you get from point A to point B with a simple push on the D-pad making it very easy to pick up even if you skip through the many and detailed tutorial dialog’s.

Even the more advanced techniques for compleMenting your objectives requires little effort to get used to. From the use of the many different field skills that range from healing to transportation across the map or even blowing away enemy pieces or tornado’s they all require as simple an execution as an attack command, even finding the many secrets and treasures scattered around the map requires little effort in terms of diligence on your part allowing you to concentrate on enjoying the game. 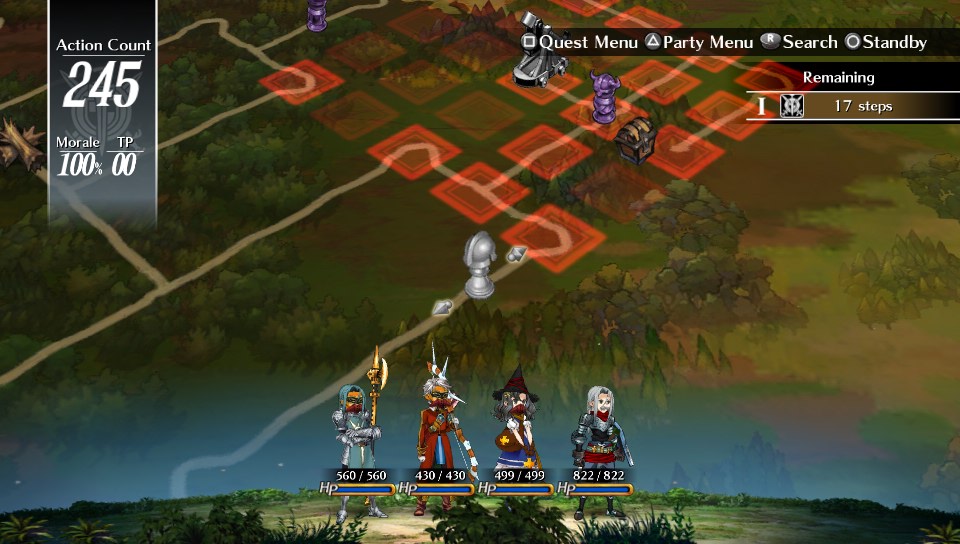 This brings me what happens when you encounter another piece on the field, doing so will initiate a battle with enemy mercenaries, these battles can be avoided at times however if you have turns its likely a good idea to take them on as it will provide experience for your troops to level up as well as items and rare materials. Battles take part in a side view environment along 3 lanes with you on the right and your foes on the left.

You must move each of your units along these lanes and switch between them within your limited action gauge to position yourself to attack, the four most noticed and initially available units are simple but effective, fighters use melee damage to strike foes at close range and require repeated presses of the O button to chain strikes however this also requires timing as quite often your opponent will go flying and be just out of range of your strike, Rangers and wizards use ranged attacks and require some positioning in order to deal damage – but even then you must time your attack to hit a foe in their attack zones. Finally the medic also uses range damage, throwing vials of acid at opponents however they are more of a support class able to heal your units with potions or by placing first aid on the ground for your units to walk over and heal though it is a double-edged sword as opponents can make use of these items too.

There are multiple other classes and more advanced classes available as you progress through the game, so you should remember to check the roster of available units on a regular basis. Once again this system becomes very simple to use with little practice and comes with a detailed dialog to help you understand it all from the off. What it really comes down to is the way you utilize each of your party members strengths and weaknesses. 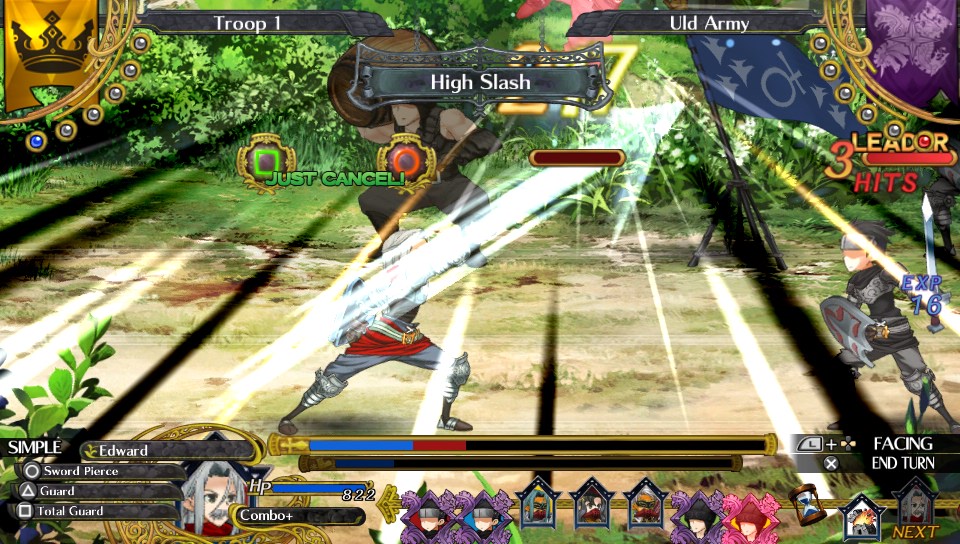 While there are many aids in the game, from sniper towers and shields as well as traps, a little strategy can overcome their usefulness as you must become aware that your foes will be employing the same stratagem as yourself. Yet again there are many deeper and advanced tactics available to you. However the basics are all easy to get to grips with and the more complex tactics, such as standing near by a unit when you heal them will heal you both and using a knight total guard will protect all units in an area large enough for 6 units from melee and ranged attacks, seem to fall into place quite quickly.

Another side of grand kingdom as well as unlocking daily bonuses, for each day you play you get a log in bonus similar to those of mobile apps with each successive day going towards a better bonus. I personally find this to be a great incentive to play daily as it provides some very useful and rare items. However this brings me the “online” war option this allows you to sign a contract with one of the 4 nations to partake in a set number of battles for them which offers multiple rewards in terms of payment from items to coin as well as exp to give you an added edge in battle and the story quests. Sadly the term “online” may be a little misleading though as the results are cumulative for your faction, the foes you will be facing are AI controlled versions of other players meaning you likely won’t be playing against others in the future. 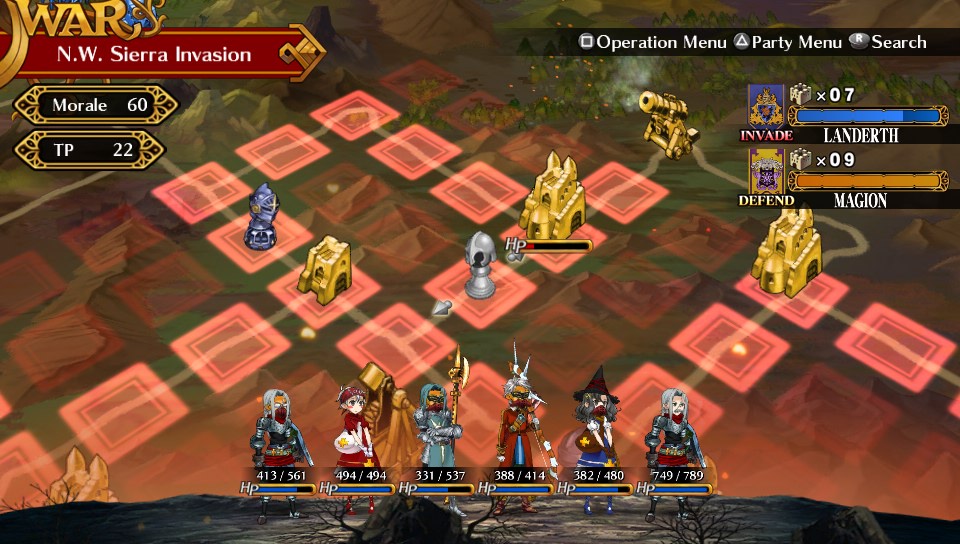 This does however pose the advantage of not having to wait around for every player to make a decision in regards to both traversing the map and in battles. Though a technically simulated online war, this does not take away from the fun or the chaos – unless you just want to fight your friends that is. Online functions a little differently to the main game. You will be placed into the map and right away the chaos begins. That is if you are not already late to the party as there is no turn by turn play. Everything is moving and happening at once – your allies are charging enemy strongholds as you try to defend your own, cannon and ballista fire raining down upon you and multiple units charging round the map is all honestly a tad overwhelming at first. After dominating the offline mode for a while this took me back a little and saw me losing more often than not. Seeing my lv 15-20 been charged by lv 50 dragons, and to add insult to injury, you must sit through the whole operation to claim your rewards – however they are usually well worth it.

The one upside to this is it is a team effort and this means if you’re a level 15 taking a level 50 dragon mage on, so is one of your foes as in any wore there is no bias if your good your good if your weak your dead but its the team standing at the end that come out with the spoils. Honestly i have spent most of my time with the title on this battlefield and though the story is interesting the action hear is what really sells it for me. 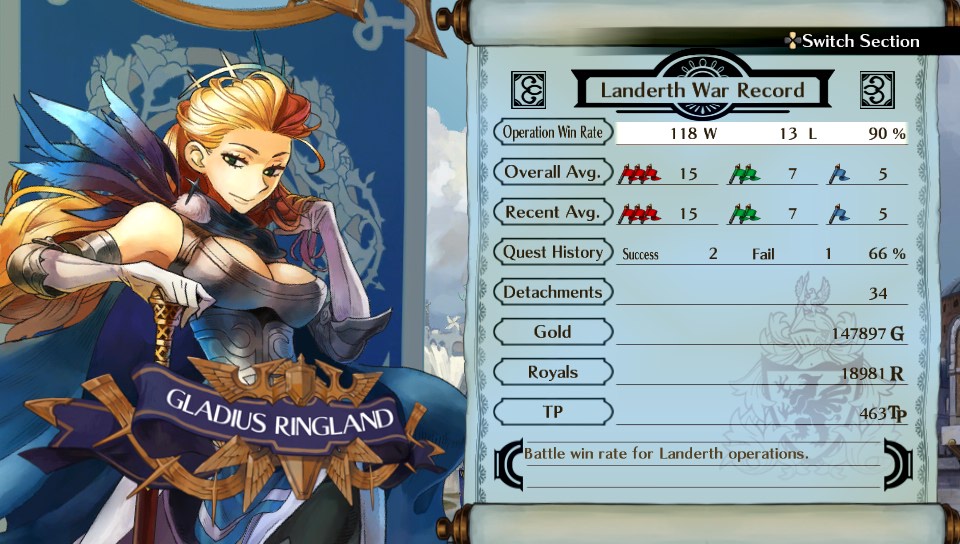 My final thoughts on this title are quite simple after playing the beta and looking forward to this game i am quite happy with it myself, there always something to do many of the features were not covered hear as to mention any of the side options in detail would be unfair as there is just so many of them each with different bonus to enrich your game play and while its all alot to take in from the off settles into a rhythm quite quickly, with all aspects of game play easily sitting along side each other and working together.