Banner Saga 2 was giving as a free game as part of Games with Gold last month.  It is a game series that I know of but not too much about.  I found myself in an odd situation as I now “own” the second part of the Saga but not the first.  I hoped that it would be easy for me to catch up.  Well, I was right and wrong at the same time.  Imagine jumping into The Lord of the Rings saga at The Two Towers after reading the summary section from Wikipedia for The Fellowship of the Ring.  You know enough to get you started but you have that sense of always being lost throughout.  This is what playing Banner Saga 2 is like if you skipped the first one. 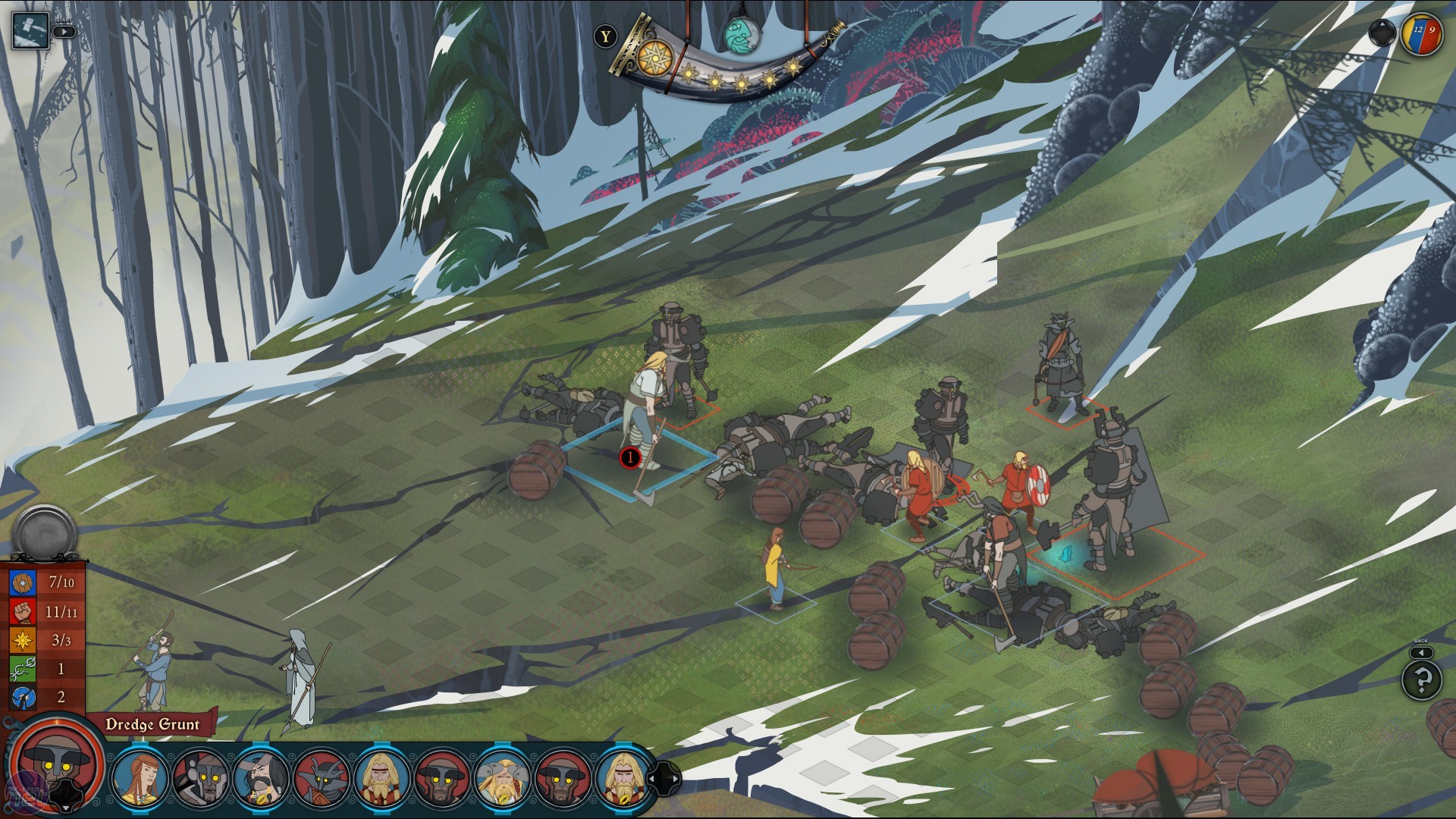 I will admit that I did struggle at first to get drawn in as I felt like I had missed key parts of the story but as soon as you start to enjoy the game for what it is, you start to appreciate the experience it is trying to create.

For those who have not played Banner Saga and do not want it spoiling look away now.  Banner Saga 2 takes places right after the events of the first; you are on the run from the Dredge, who are hunting down the last remaining humans and Varl.  Whilst this is all going on there is a huge Serpent god trying to destroy the world.  The amazing thing is that even though we are in an age where games like to pad out with extras, this is the single narrative running through the entire with no side quest to distract you. 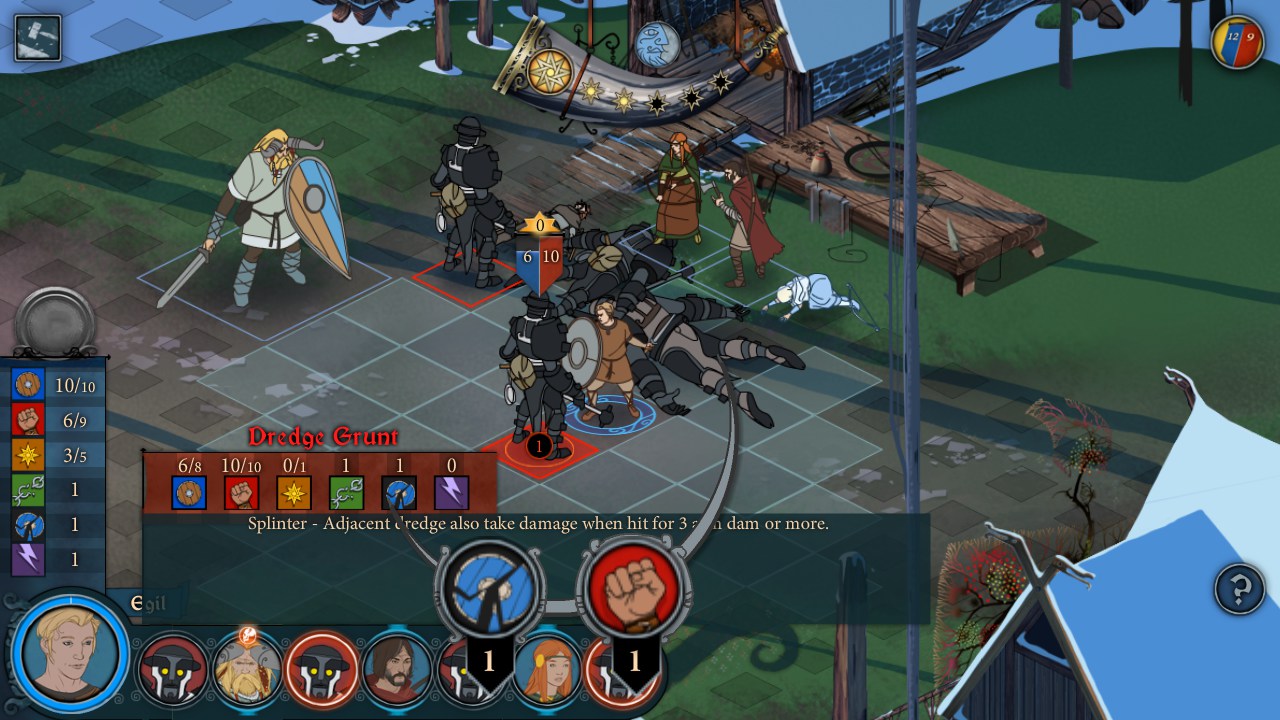 The way in which Banner Saga 2 keeps you invested in the quest is by splitting it up into three main sections; conversations, travelling and of course, battling.  The main bulk of the narrative is told through the conversations you have between all the characters.  This department is really strong with the Banner Saga 2 as the detail that (developer) has gone to in creating the world and all it’s troubles is truly amazing.  You can feel every character’s personality by the words in which they deliver.  You can sense the emotion of your caravan as you make decisions for them, whether they are good or bad.  There are some real moments where you will consider if your choice was the right one.

The travelling of the caravan is an interesting mechanic and will take up a good part of the game.  This is basically the transition between battles, conversations and major plot events.  As you move you require a certain amount of supplies per day.  When this runs out you must restock from traders or your moral will go down.  You could loose travellers along the way which again, will decrease moral.  You will have various choices to make along your travels such as exploring villages, excepting strangers into your caravan and of course, battling.  It does not matter what you encounter on your journey, it will always effect your caravan’s party and this can have consequences when it comes to battling. 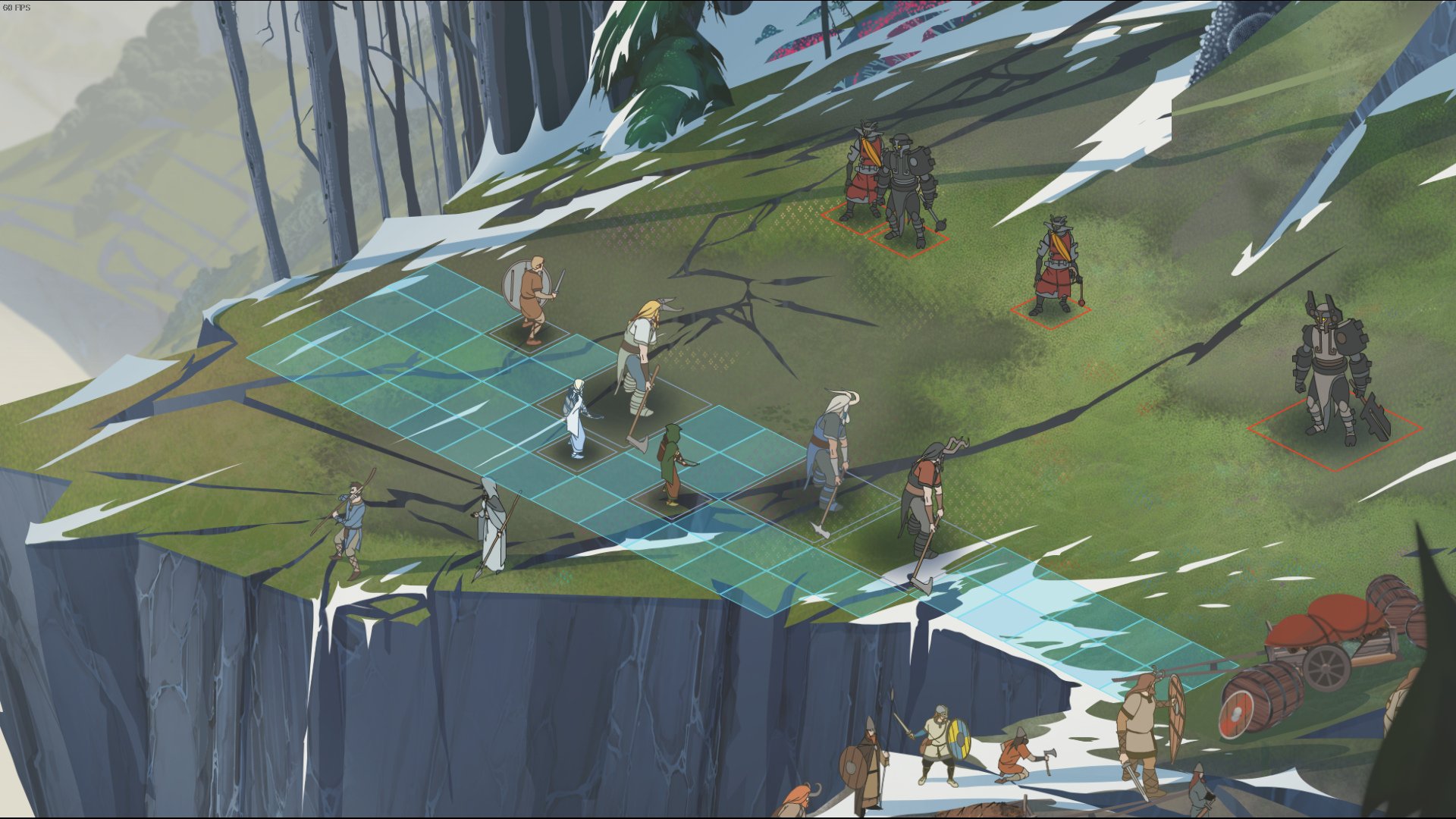 Banner Saga 2 is a tactical turn based RPG set on a tiled field.  Each character will belong to a certain class that will have a certain amount of tiles they can move during one turn.  This can be extended though by using will power.  Your turn is made up of two phases; move and an action. You don’t to move everytime as you may find yourself in a perfect position. The same goes with the action but the majority of these are too attack.  Other actions will include rallying up your allies and healing them. If you do choice to attack you will have to choose to attack your enemy head on or by bringing their shield now. The lower the shield the more likely an attack will not deflect. This is a good at Chipping down the enemies but if you are in a good position for an all out attack, i would go for that instead.

As turn based games go, this is one of the simplest to learn.

Banner Saga 2 will not be for everyone as there is quite a bit of down time in between battles.  It could also put people off due to the turn based combat as some players find it difficult to play a few moves ahead.  However though if you enjoy all of these things then Banner Saga 2 is a perfect game that you will find hours of fun in.  It is a joy to look at whilst playing with the well drawn comic style cut scenes along with the detailed character models during the battles phases.  The game as a whole reminds me of the various board games I currently partake in.  The only thing I would highly recommend is to play the first part before even looking into the second part of the epic Banner Saga.  I wish I did.