Chime Sharp is the latest musical puzzle game from the highly successful Chime series.  Chime Sharp advertises itself as tetris with music but as I did not play the original release, I did question how can you pretty much reinvent tetris?  Well, Chime seemed to do it pretty well and this sequel contains new music, new visuals & new modes but does it still contain what made the original so popular?  As a new player to the series, this should be an interesting experience.

Chime Sharp is a puzzle game at its core so as you would expect there is no story present.  This is a pickup game in which you aiming to beat your high score or unlock the various levels and modes.  How long it lasts is entirely up to yourself and what mood you are in.  I myself found countless hours of fun here as the gameplay is very addictive plus the music is great to listen to as you advance through the levels.

However though, to get to this level of enjoyment I had to take quite a rocky road.  I am not sure if the original Chime had tutorials to begin with but with Chime Sharp they do not seem present.  There are practice levels for each stage but there is very little instructions, if not any, for what I actually need to do!  Honestly, it was only by mistake that everything clicked for me. 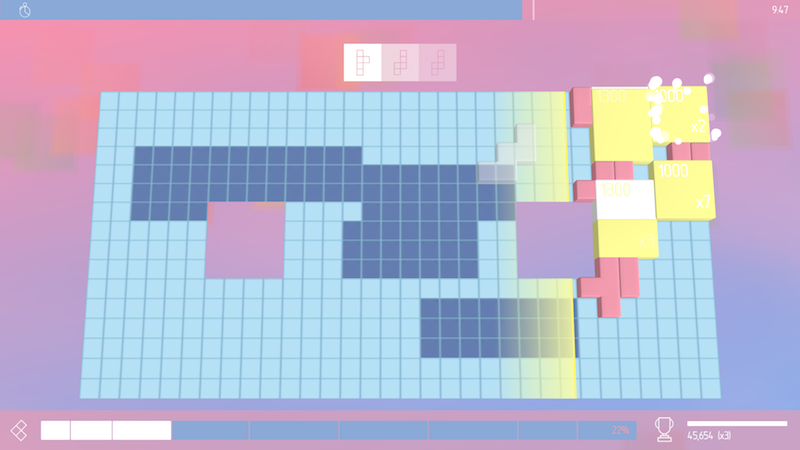 If you are not aware, in Chime Sharp you control various shapes in which you place upon the gameboard.  When you alight shapes into blocks of at least three they will clear from the board leaving a coloured imprint.  A beat bar moves from left to right in time with the music and if you manage to combine more shapes you will receive a multiplier thus increasing your overall score.  To make the game easier for myself I was combining shapes within the same area but this was not giving me higher enough scores to unlock extra stages.  Each stage is timed and I found stages finishing before I had even got started.  It was a nightmare & I was not having a good time.

On the stage details there is a coverage percentage score (which in my case was very low) which lead me to believe I may have been playing the game wrong.  Once seeing this score on the stage I began to noticed a few important functions of the game; shapes left colour imprints to show where I had put then and there was a coverage meter at the bottom which increased when shapes were cleared from a new area. It all clicked – I needed to fill as much of the game board as possible by creating larger shapes and by abusing the multipliers I was receiving. 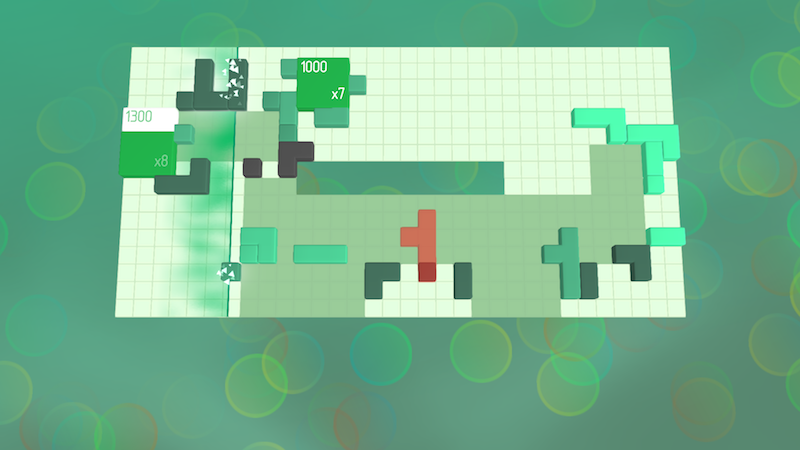 It may be partially my fault for not reading the game screen correctly, but having a tutorial mode at the start would not go a miss.

The gameplay is great though; the rush of trying to combine multiple shapes together before the beat bar reaches the end pushes you to become perfect at the game.  Leaving gaps is not great for efficiency but sometimes you just get overwhelmed with the speed of the music and start placing shapes down wherever they may fit.

The length and speed of the stage all depends on what music you are playing too.  The speed will effect how long it will take for the beat bar to reach the far right meaning that you have less time to stack combos with shapes.  Obviously as you progress through the game, stages become quicker and more frantic.  The length of the stages can be extended through bonuses gained within the game and these can be lifesavers.  There has been many times where they have activated during the final few seconds. 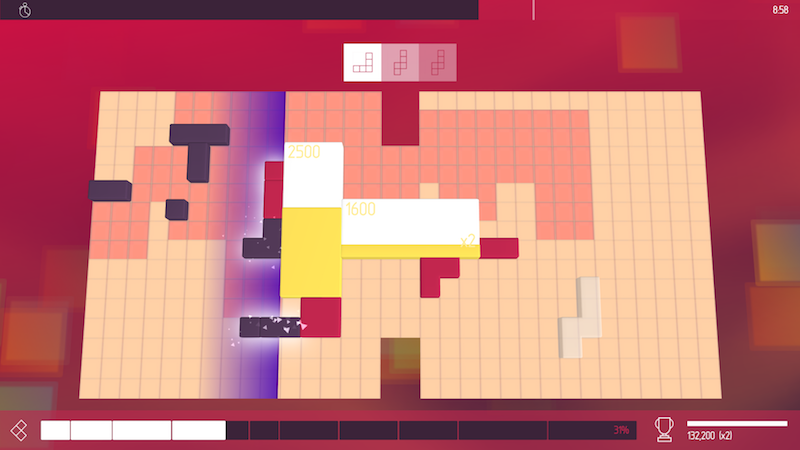 The controls for Chime Sharp are both simple and very responsive.  You move the shapes around the board using direction input and you have the freedom to rotate the shapes to fit your purpose.  Not much more to say here as the puzzle is as simple as that.  Where it truly shines though is in the graphics and sound department.

Graphically, Chime Sharp is a joy to look at.  Well contrasting colours fill the screen making seeing your objective clearly without having to second guessing yourself.  Bold colours outline shapes on the board making it easier to see where possible combos lie.

With this being a musical puzzle game, the sound design must be perfect and I can confirm that it is great.  Sounds genres range from mellow chill out beats to fast paced mixes that will get your pulse beating as you attempt to fill the board 100%.  The colours and sounds mix together perfectly like a match made in heaven thus creating a relaxing environment in what could possible be a stressed experience.

From what I can see, Chime Sharp does have everything going for it that made the original Chime special.  As I have mentioned, I did not play the original Chime so I cannot comment on if there is anything same and this is just a glorified enhancement but I can say that I enjoyed the experience from start to end.  Chime Sharp is a great go to game if you have a spare 10 minutes or if you need a game to wind down too.  It is not too demanding but you do feel a great sense of accomplishment the closer you get to that 100% coverage rate for each stage.  For me, Chime Sharp will sit as a unique puzzle game that I highly recommend to anyone who enjoys playing to the beat of music.  There are a few games that you can do this too but Chime Sharp pulls it off perfectly.  Yes, it may just be Chime’s bigger brother but if the formula is not broken, why fix it?