Final Fantasy XV is a title that has had its name thrown about for numerous years, starting off life under the title Final Fantasy XIII: Versus until a few years back in which the project was gutted and reused under the name Final Fantasy XV. Will XV stand proud among it’s numbered brothers or does it belong with the spin offs? 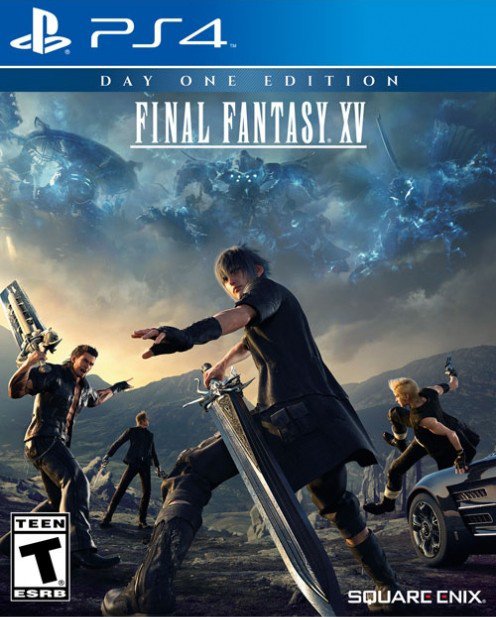 Final Fantasy XV takes place on the fantasy world of Eos, mostly held captive by the Nilfhiem empire bar the bastion of hope the kingdom of Lucis. You take on the role of Noctis Lucis Caelum, heir to the throne who along with his friends Gladio, Prompto & Ignis have set off to a nearby continent for his arranged marriage. Naturally its Final Fantasy so it’s not as simple as a nice little car ride, the car breaks down and Noctis has to perform some tasks to pay for the repairs, while he is going about his merry way the Nilfhiem empire have managed to overthrow King Regis and take over your home town of Insomnia, Noctis and Co must now quest, battle and talk their way into reclaiming Lucis’s freedom and defeat the evil Nilfhiem empire.

The storyline for Final Fantasy XV clocks in at around 25/30 hours which isn’t too shabby but it does actually take around 10 or so hours for anything significant to happen, the invasion of Insomnia which is the key trigger to the games events is actually glossed over and only briefly seen in a day 1 patch, the same actually happens with the character development for the main cast, fortunately they make up for this by expanding on their relationships tenfold within the game but the initial meetings and reasons for being together are actually explained in a collection of short anime videos on YouTube, much like the invasion of Insomnia happens within the feature-length movie Kingsglave.

Therein lies the problem with Final Fantasy XV in terms of narrative, it’s good but it’s spread far too thin and across several forms of media which without seeing them can negatively affect how much you get from the story, It does pick up towards the latter half of the game but the first handful of chapters are more than sparse with story but teeming with character development for the Bro Squad.

Visually Final Fantasy XV is a powerhouse, the world of Eos is utterly stunning and each area varied and teeming with wildlife and foliage. The character models are all really well made and the designs are what you would expect from the boys & girls at Square Enix, the game has a mix between modern and typical fantasy style clothing in somewhat of a Steam Punk style which within the settings work really well and even civilians in shorts and t-shirts don’t seem out-of-place.

There are several well-built up places which does cause the base PS4 to stutter a little but nothing game breaking, the frame rate for the most part is consistent outside of one major boss fight. Some graphics do pop in and unfortunately on a few occasions one of the main characters stayed in a somewhat transparent state, this hasn’t happened as of yet with the latest update (Crown) but might be worth making note of just incase.

As is synonymous with the series, Final Fantasy XV has an exceptional soundtrack, featuring originally orchestrated tracks and vocal tracks from music talent Florence and the Machine, S-E have hit the nail on the head when it comes to the aural experience, I personally enjoyed the Overworld Theme, Battle Theme and Florence & The Machine’s almost haunting cover of Stand By Me which perfectly sets the tone for the intro section.

The voice acting for the game is once again spot on, regardless of English or Japanese dub you’ll be pleasantly surprised, I initially started it with the Japanese dub due to my familiarity with it but switched over to the English dub and haven’t gone back. There is an issue with lines being repeated over and over again, one line in particular haunts my dreams which is frequently spoken by Ignis!.

One major issue here is that without many cutscenes the dialogue and story building is done on the fly while in the field, this wouldn’t be an issue but any dialogue activating action cancels out the previous audio so characters will cut each other off with cries that the Empire has arrived or that Ignis has discovered a new sodding recipe!. 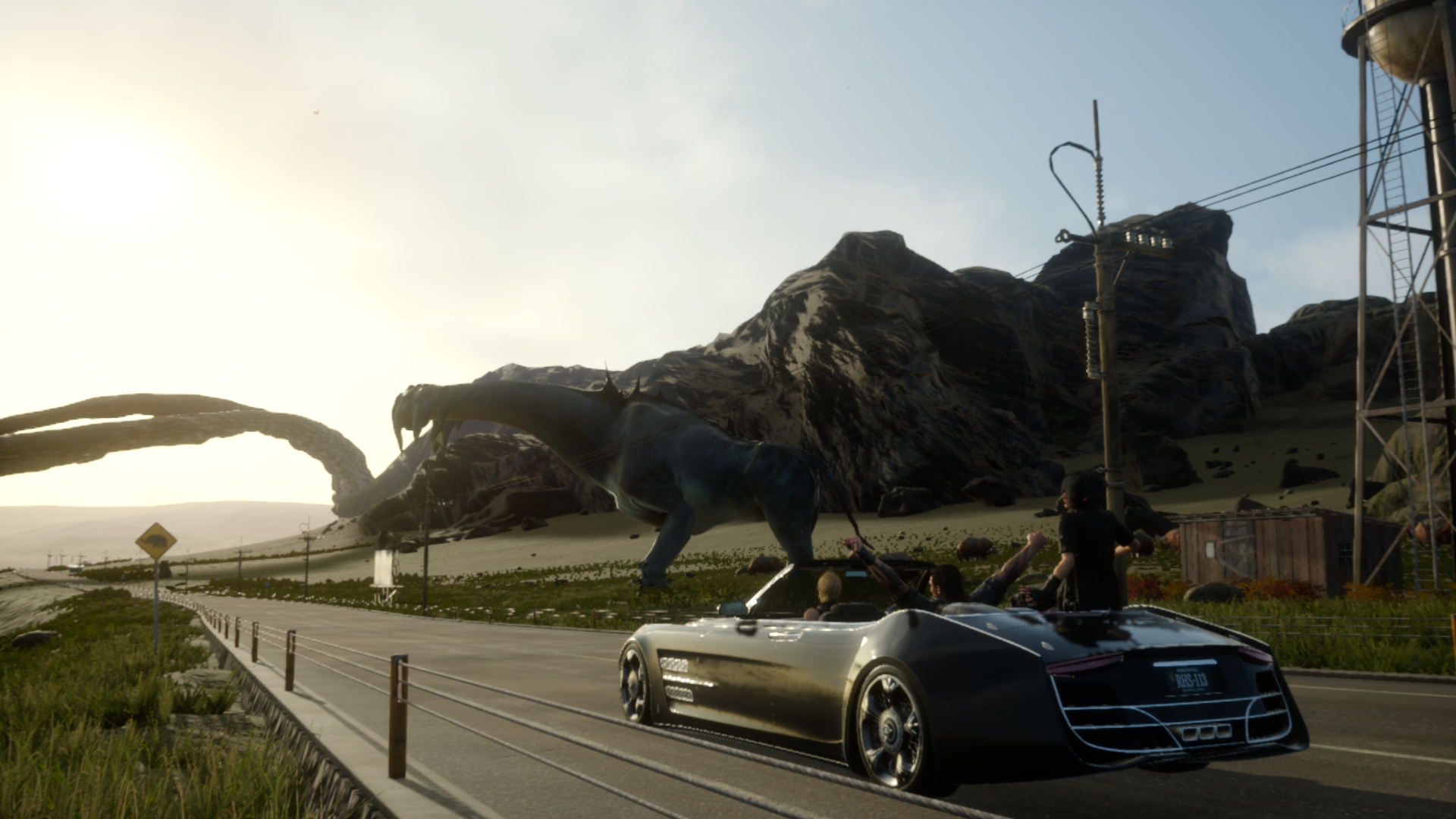 Now the big departure for Final Fantasy XV compared to it’s peers certainly lies within it’s gameplay, gone are the turn based battles or the like it’s combat is now firmly rooted within the Action RPG genre, rather than funneling the odd side quest and open area to you Final Fantasy XV throws you into it’s massive world with more quests than you can shake a stick at and an almost overwhelming sense of freedom!.

Initially you are given two options of how to get around the massive world map, shoelace express or The Regalia, the former being self-explanatory and the latter being one of the more iconic aspects of Final Fantasy XV the car!. The amount of time you spend being driven or indeed driving, which is heavily on the rails I must add is staggering and when it boils down to it The Regalia almost feels as much as your party as Prompto, it never fails to raise a smile from me cruising along listening to soundtracks of previous Final Fantasy games in the Regalia drinking in that downtime before my next hunt.

As you progress through the story sections of the game you open up even more of the map and give yourself the ability to ride everyone’s favourite non Moogle Final Fantasy mascot the Chocobo!, the first time you see these is a genuine moment for any fan of the series and XV has more than done them justice!.

As mentioned earlier the game is chock full of enough side quests it’d make title like The Witcher 3 blush, various dungeons you can tackle throughout the world, monsters to hunt and mountains of treasure, food and craftables to collect this game isn’t short on activities. To complement these activitives there is also a shed load of distractions on hand such as Fishing, Chocobo Racing and Justice Monsters Five which is some sort of pinball game and far more addictive than it has any right to be.

So the game has tonnes to do on top of an engaging story with some of the best set pieces in the series but is it actually worth it? well yes and no, the EXP and chance to see more of the world is always fantastic but the actual side quest content is just fetch quests, gatherings or monster hunts with little to no story, there are a few exceptions but for the majority the side quests lack the charm of a certain other Open World RPG released in the last few years.

The combat has taken the new route for the series in that it’s fully Action unlike the system employed in Lightning Returns, for those who are a little worried about keeping up there is also a wait system which allows you to pause the action and plan your next action. The combat at full speed is frantic and full of options for you to deal pain, you have access to every form of weapon within the game, special weapons further in the story and magic, all work well but Magic isn’t as intuitive as it could have been involving crafting and taking up a weapon slot, along with some serious downtime between attacks. 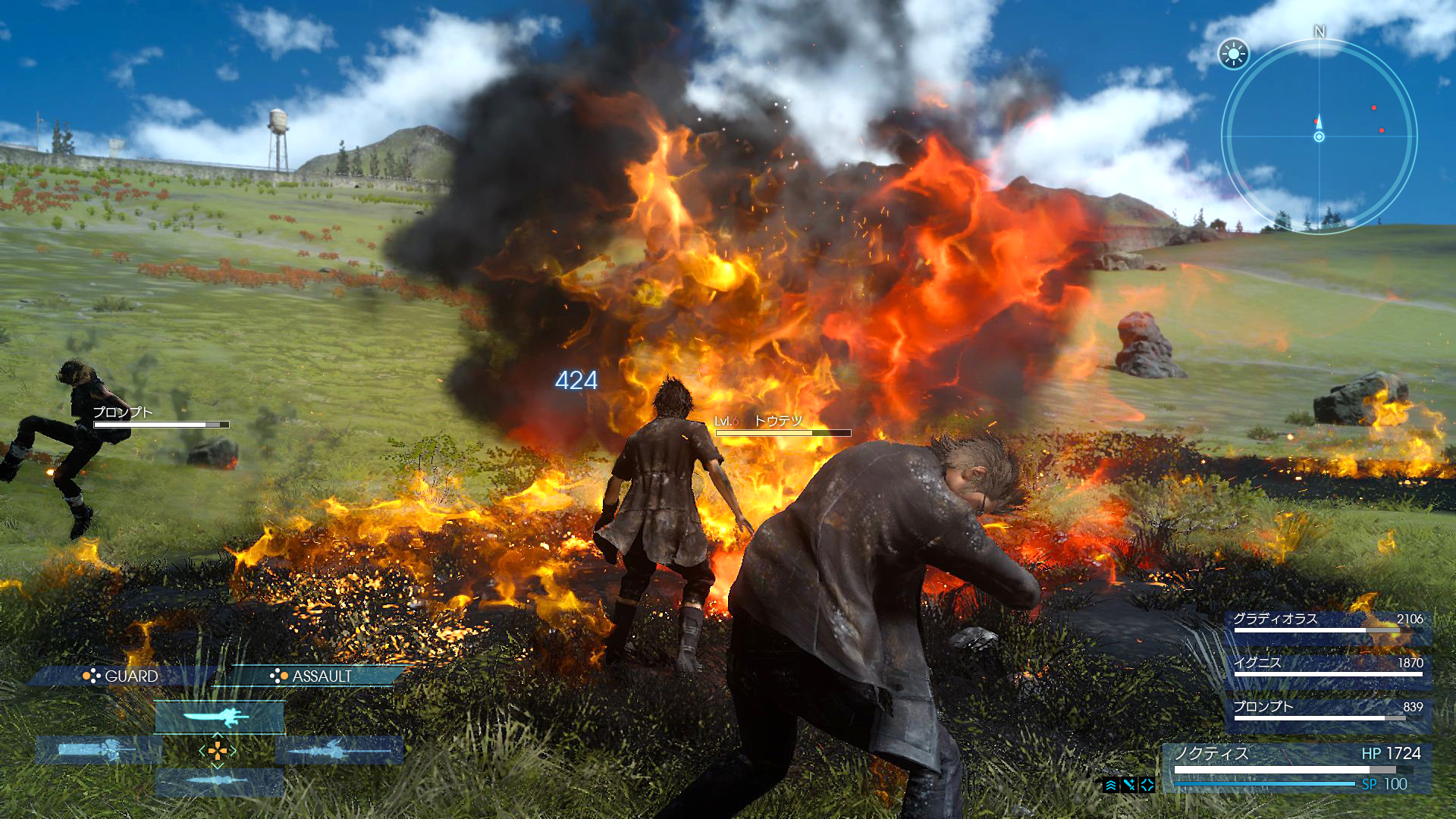 Noctis has the ability to throw his weapon and teleport to it, these can be used mid combat as a way of closing the gap or surprising your foes, the party A.I is well done and will support you for the most part, you can also use them to create bigger attacks and debuff enemies. The magic as mentioned isn’t ideal but it does add a feature where it actually affects your surroundings, electric will travel across metal tracks and fire will burn longer in areas of high foliage, this gives another dimension to combat when planning on taking on much bigger fiends.

Items are using by simply pressing the R2 button and selecting the item, summons are activated in special situations, you have the ability to dodge attacks or in some cases block and parry, the combat is very reminiscent of Kingdom Hearts: Dream Drop Distance only much more fleshed out and I honestly really enjoyed the combat especially later on when I had unlocked more abilities. On the subject of unlocking abilities it works very similar to the sphere grid, you earn AP through any activity you do and you can put them into the Ascension Grid which enhances and unlocks more abilities.

Leveling up has also taken a face lift, you can stack EXP through play, once you feel you’ve gotten enough you can camp or go to one of the many caravans/hotels in the game and then the game distributes the EXP and levels you up, the game tries to remind you of this often by making night much more dangerous than day and limiting travel options at night as compared to day.

There is so much I could potentially talk about in regards to this title but half the joy of it is discovering, from hidden cutscenes to conversations about each of the characters designated role within the group it rewards the time you put in to the game, its pacing is all over the place in regards to the story but it comes to one satisfying crescendo and the post game content is more than sufficient to keep you till the first DLC drops. Final Fantasy XV is a little light on Final Fantasy conventions and may kick the hive a little too much for hardcore fans but once you scratch away at the shiny surface and swallow the bitter pill of requiring outside media to fully enjoy the story, you’ll find yourself the heart and soul of Final Fantasy of old, Long live King XV