Naruto Shippuden: Ultimate Ninja Storm 4 aims to finish off the saga of Naruto which was started way back on the Playstation 3 with the release of Ultimate Ninja Storm 1, follow on from the 4th Great Shinobi War which was the main focus of the previous release this game starts there and ends where the manga/anime ended.

Review based off of a Review Copy provided to us by Bandai Namco Europe.

For those who are new to Naruto and his Ninja adventures this isn’t the starting point you need, if you have access to Playstation 3 there is a collection coming out soon which covers up until this point though Ninja Storm 3 at the time had created it’s own ending to the war section so that bit is actually covered again in this title. For those initiated in the Hidden Leaf, the game starts with the iconic battle of Madara vs Hashirama and then fast forwards to Naruto unmasking the mysterious and powerful Tobi.

The story mode is presented in a time line split between the two sides of Ninja or simplified Naruto & Sasuke path, each “Episode” is presented with either a cutscene or still frame form and you are given the average running time for each section, once you have seen the story section you are put into the core fight these range from standard battle to mob battle and the games famous Interactive battles. The differences between these are that standard battle is exactly what it says, standard 1 on 1 or 3 on 3 no gimmick bare bones battle, Mob battles are one character versus many much like Musou games & the Interactive battles are gimmick battles with lots of QTE and flashy scenes. 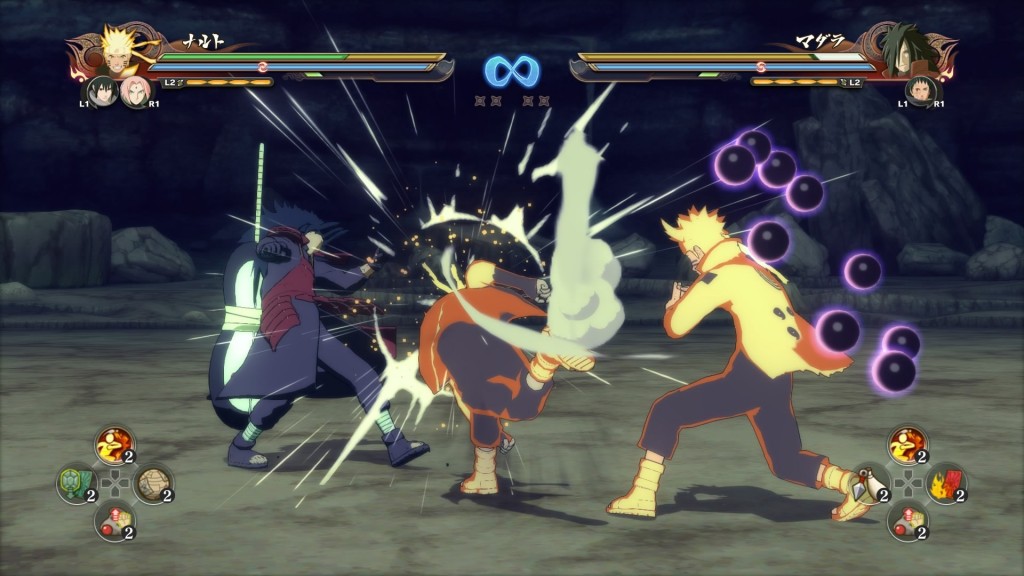 The standard battle system for this game is pretty consistent with the standard of the series, it’s flashy, fast paced and hard hitting. You have a collection of items to help when in battle and swing things in your favour and you always have to keep an eye on your Chakra, Substitution Jutsu isn’t something you can abuse as you only have a set amount before they run out and you need to wait until they replenish. Combat is a few differing melee combos though not as many as previous titles, you’ll find you see the same attacks many times during battles, throwing Kunai as a way to interfere with moves and Chakra building, Chakra building builds your power up so you are able to perform special attacks, throws to break blocks & during 3 on 3 you also have support attacks from your team. Special attacks are your hard hitters and can leave you wide open if blocked or dodged, Ultimate Attacks are as above only they tend to be match enders and some characters have Awakened states, here you are alot stronger but comes in a limited time scale and once that has run out leaves you very vulnerable. If you have played any of the previous ones you’ll be right at home with the combat here it’s just a shame that with each version they strip the melee combat down more and more.

The Mob Battles play out like they did in UNS3 only this time rather than the illusion of exploring these are set in arenas, you are usually confined to one combo and one special move to deal with the hordes of enemies which are usually copy and paste jobs. Though a fun distraction at first the controls are clunky and irritating in this mode as targeting is all over the place and tends to have a mind of it’s own, they also tend to over stay their welcome and become very repetitive quickly especially if you need to replay them to fulfill the battle conditions for more unlocks.

Interactive battles are where Naruto shines, all the abilities from the standard battles apply but these are in more of a boss battle form. Often there are patterns you need to learn and some have certain gimmicks to them in order to battle the character, during the battle you’ll hit scenes from the anime/manga and have to react to them in QTE form. These really show off the gorgeous and authentic graphics of UNS4 and keep the battles feeling tense and generally really enjoyable, perform these well enough to unlock extra scenes to further the authentic experience.

Graphically this game is untouchable in visually fidelity, it mimics the anime perfectly and everyone looks and acts exactly how they would in the show. The voice acting on both Japanese and English is both spot on even though I personally would suggest playing with the natural dub but that’s just my personal preference. The soundtrack is that from the show and perfectly helps set the scene or pump you up mid battle and the sound effects are all spot on, really as a product tie in this is one of the most authentic and pleasing experiences you can get as a fan of Naruto. 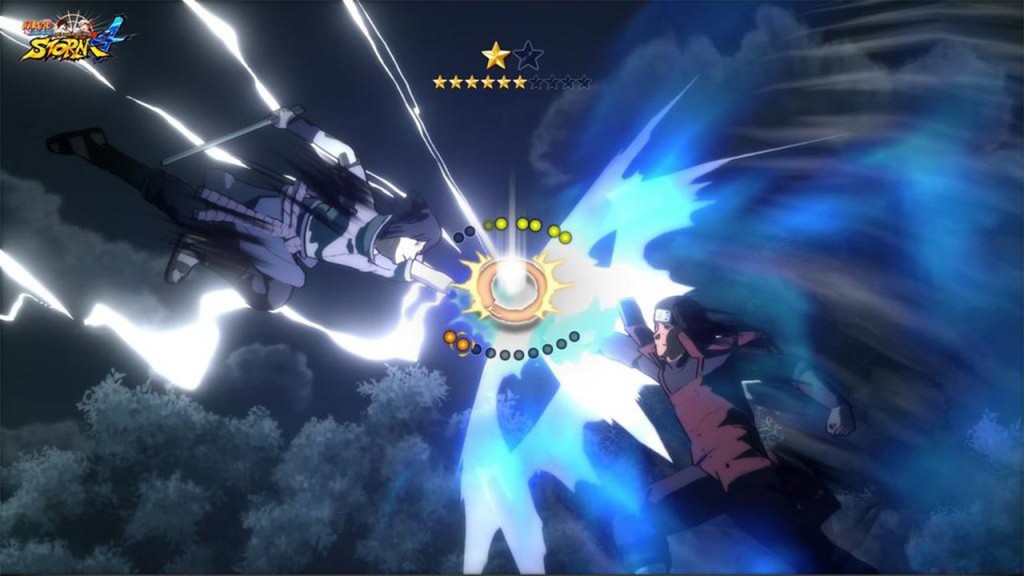 As an added bonus once you have finished off the Story mode which shouldn’t take you more than 6/7 hours for your first run attempting all the sub missions you can tackle the Adventure mode. This is the series standard free roam mode, featuring a unique story set after the events of story mode this sees you exploring familiar locations meeting the cast of the series and performing side quests, purchasing equipment and getting yourself into all kinds of match ups be them classic bouts or dream matches. This mode can be a little grindy but is a pleasing side addition for fans of the series who’d want to explore the series locals even if they are a little smaller than they have been in previous versions. The main idea to this is to complete 50 “Tasks”, it’s a bit of fun but lacks the bite of the story mode & the fetch quest nature of it does tend to wear thin on you in a few hours.

I only briefly tackled the online mode due to a lack of players but what I played the game held a constant frame rate and was quite fun but brief. You have the standard casual and ranked match ups aswell as a tournament option which would be quite fun vying for Ninja Supremacy. Having played the previous games online somewhat this mode is one for the more hardcore fans but should extend your playtime as you will want to rise the in ranks, hopefully they can balance the game so it doesn’t end up the same 3 characters all the time like the previous titles. 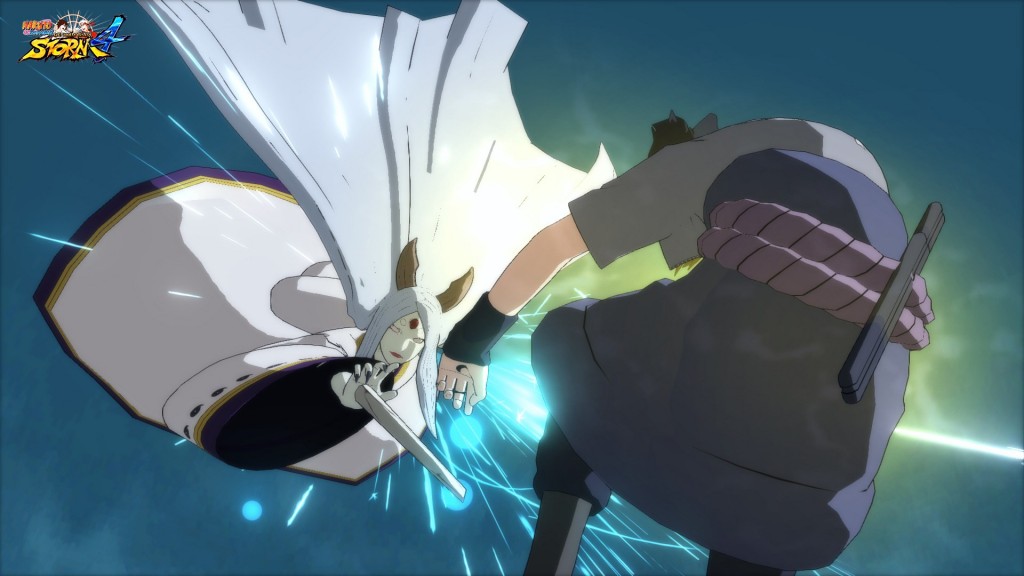 As I have said previously in this review this is perfect for Naruto fans, outsiders it’d be completely lost on but trust me when I say this isn’t your standard shallow cash in but more of a swan song for developers CC2. With over 100 characters from the series to playthrough, more coming in DLC & additional story scenarios aswell as the adventure and online modes you’ll easily get the most bang for buck out of any Naruto title with this one. It may be a little shallow for totally competitive fights and the repetitive nature of the combat system into mini cutscenes does knock it somewhat it’s a perfect example of how you should approach a franchise like Naruto. Personally I hope CC2 get their hands on One Piece and use everything they have learnt over the years with this series to continue crafting these borderline perfect anime experiences.