Hot on the heels of the release of Dragon Quest VII, Playstation 4 & Vita get gifted their own title in the series, heavily inspired by Minecraft this title hopes to bridge the gap between crafting and questing. Will our mighty heroes save the day or is this title destined to gather dust in the halls of forgotten spin offs? 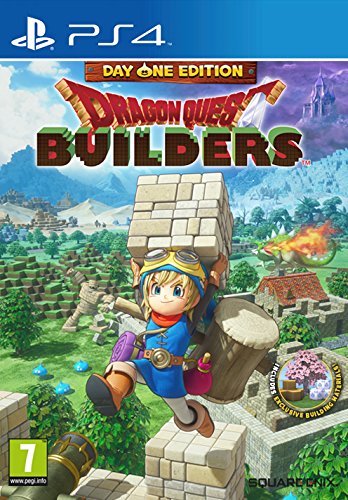 Dragon Quest Builders is set following the end scene of Dragon Quest 1 (who some may know as Dragon Warrior from the Nes) for those unfamiliar with the game it offers you a choice in the last scene and this game follows the bad choice. Awoken from your slumber in your grave (Awise fwom your gwave) a mysterious voice introduces you to your ability to craft and explains the world is in disarray and humanity have forgotten how to build! How fortunate that you happen  to play as Bildrick the legendary builder; destined to repair the damaged caused by the evil Dragonlord, it’s worth noting you don’t have to call him Bildrick or in fact have him as a boy at all, upon start up there is a brief character builder which allows you to put your own personal touch on our hero.

Setting the game post Dragon Quest 1 is to me an inspired touch, it helps create a certain kind of magic within the art style and game play in that it’s a thrown back to the Nes days, it may look basic but the amount of wonder and mystery you can find throughout the land is pure fuel for the imagination. Where Dragon Quest Builders differentiates itself from titles such as Terraria and Minecraft in that there is more story & quest focus. Rather than just holding hands in the intro and then letting you go off and leaving you to your own devices, Dragon Quest Builders staggers new items to craft and locations behind quests for your towns people. The quest format and the mystery of the story arc I found compelled me a lot more to see through the game than other titles of the genre, the writing I found to be quite charming and fun which is something of a theme for the game.

Visually Dragon Quest Builders is pleasing but certainly doesn’t stress the Playstation 4 by any stretch, featuring the ever pleasing character designs of Akira Toriyama (famous for Dragon Quest & a little known manga/anime called Dragon Ball) which are all fantastically animated and have some brilliant facial expressions in response to the text. The quirky monster designs the series is known for are all here in fully 3D models, there is something special about seeing Slimes jumping around a field at dawn!

The majority of the scenery is made up of blocks bar stuff like trees and other nature items, doors & items you can craft and find, while initially this looks a little cheap after a few hours in the game the settings become really inspired and show off what can truly be done with the engine.  Anything you equip changes the design of your character model which is something I feel more JRPG games really should do, the game just oozes that unique look Dragon Quest has and it really eases your stay within the game, the day & night transitions are brilliant too and not only look nice but effect the gameplay too.

The game features no voice acting at all so it’s reading all the way, this could cause an issue for some but personally I never felt it held the game back any. Musically the game is great, each area features a distinct theme which will play while you adventure, the music changes to fit situations such as being attacked or returning to your city, the one issue lies within the city boarder, the music will frantically jump between two themes while you are say building a wall around your town which can irritate. 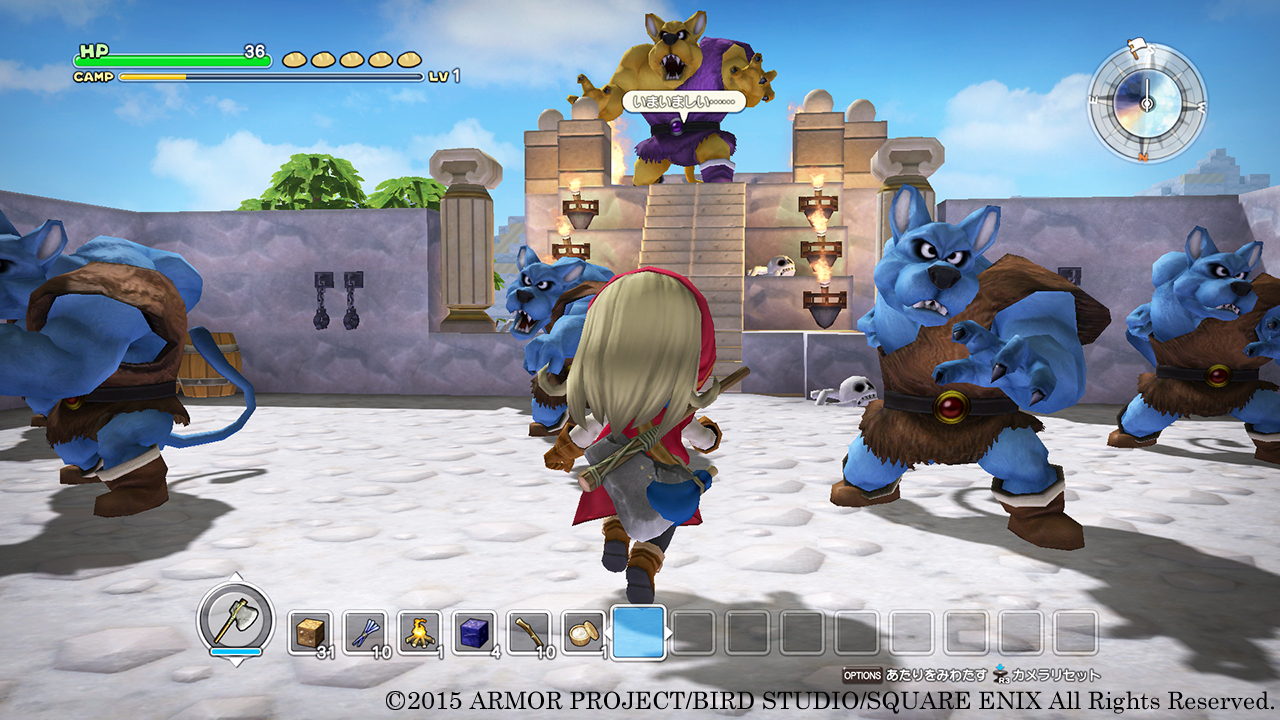 Dragon Quest Builders is basically a hybrid between the crafting survival gameplay of Minecraft & the look and feel of Dragon Quest, should you have played neither before I’ll go into a little about what you’re tasked with doing within the game. The game’s campaign is made up of 5 different chapters, upon completion of Chapter 1 you can unlock a free mode which I will go into detail about later on, each chapter lasts between 10 to 15 hours meaning your initial playthrough will be within the 50 hour range.

Each chapter sees you rebuilding a main city within the land of Alefgard, initially this consists of making basic rooms such as bedrooms and crafting rooms complete with crafting stations, this draws more people to your city which in turn provides you with quests. Quests can range from “Build/Craft this certain Room/Item” to “Travel to X & defeat this monster/Find this person/Gather this item”, the quests are fairly basic but help break up the time between building within your city. Upon completion of a quest you are usually given an item or blueprint allowing further creations, this also improves your “City Level” which helps you progress further into the chapter by bringing more quests and item crafting options.

Over time your city will be attacked by the minions of the DragonLord triggering you and your citizens to defend your town, over time you’ll gain the items and knowledge to build better equipment meaning you can travel further and fight stronger enemies, this then ultimately boils down to one final boss fight, chapter completion and then move to the next chapter which sees you start from square one. That final point could be off putting for some as losing your progress can be quite an annoyance, to counter this as I mentioned once you finish the first chapter you can play Free Build which allows you to build and explore till you tire without the daunting task of starting it over again. 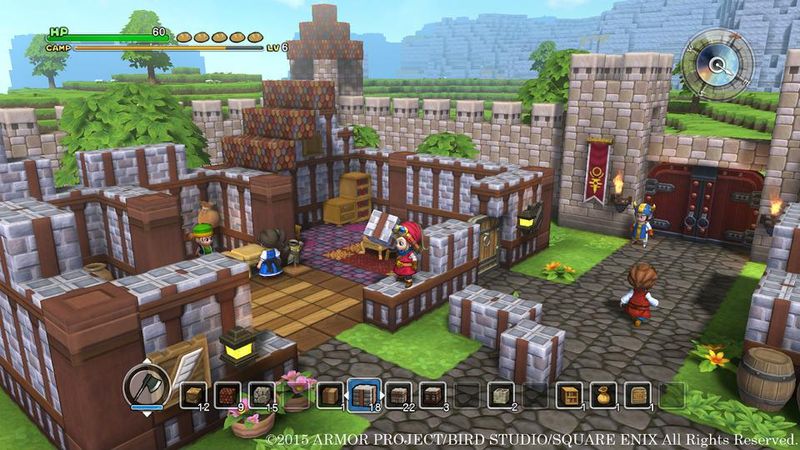 On paper it doesn’t seem that diverse of a game but once you start exploring for material and say for example come across a cave, curiosity will take you inside on an adventure for more loot, you’ll arrive at your town and decide to take a break from exploring and decide to build more content for your town to help ease that next trial looming. The game is set in such a brilliant way that you can play the game totally at your own pace and everything you do feels worthwhile, spent the past hour building? Now when the next quest requires a new room to be built you will already have the experience, need to craft new equipment for the upcoming battle? Well all the items you collected on that last quest should be of some use! Dragon Quest Builders does one thing I really admire in a game and it respects and rewards the time you put into the game, I personally had to replay the intro hour 3 times and each time I picked up something new from it and never felt like it was a grind.

One feature I really did like was that a certain item you can build allows you to manage your storage and inventory no matter where you are, this meant I could spend more time grinding materials and treasure hunting knowing all my items were being stored and should I need any I could easily swap them out via menu instead of travelling back to town.

Throughout the chapters you’ll unlock portals which will take you to distant locations to explore, this helps ease the tedium of just seeing one area for stretches of up to 15 hours per chapter. The city defence is a good little addition too helping you to remember to focus on defence and equipment as well as shiny new fountains and benches, remember this is still a Dragon Quest title at heart. The combat isn’t anything to write home about, it’s often clunky and sees you getting hit far more often than i’d like, it’s a simple press Triangle to hit and further down the the line you’ll learn more abilities but it doesn’t have the nuances you’d expect from the series that helped catapult JRPG into our lives. 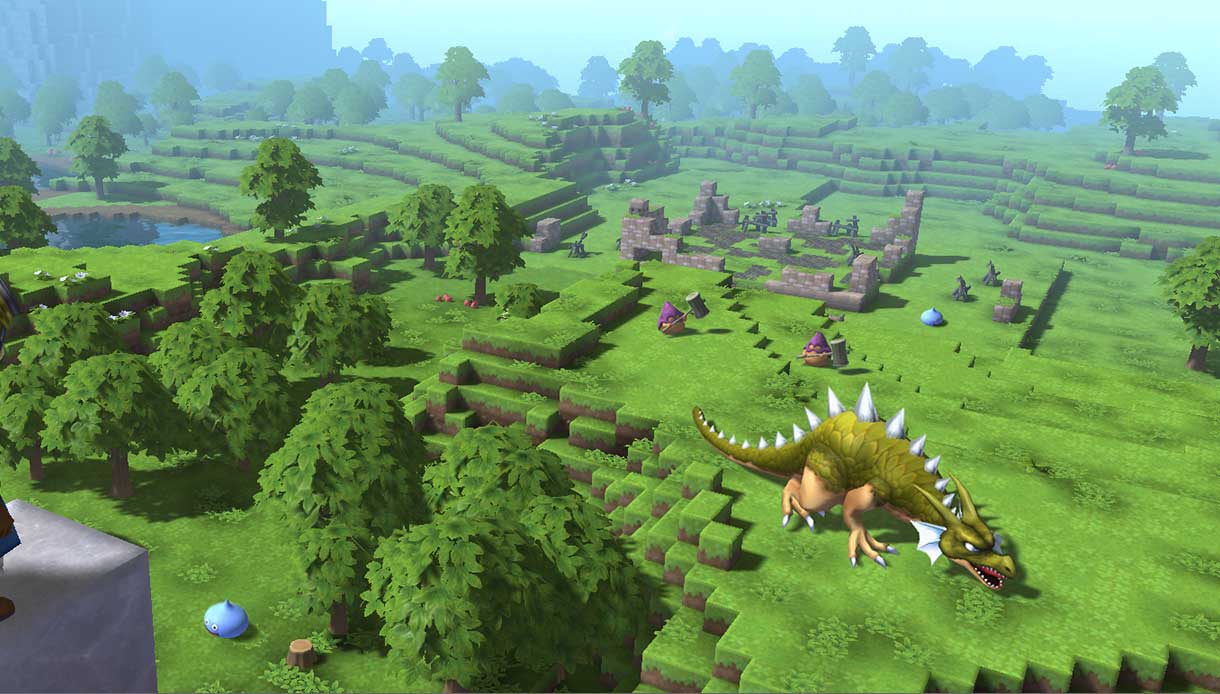 Overall I enjoyed and continue to enjoy my time rebuilding the land of Alefgard, the characters are charming, the visuals pleasing and the gameplay is so fun and rewarding it makes it a tough title to put down. The combat could of done with a little more depth and the lack of online multiplayer deals quite a blow to this title as others like it have huge followings with this feature alone. Dragon Quest Builders to me is a title I never saw coming, initially I wasn’t interested due to the similarities to Minecraft but once I’d see a few videos and actually had some hands on time with it became more apparent that this was a game I needed, it’s been a long while since I had so much fun doing whatever I wanted knowing that I could just jump back into the main quest at anytime and my experience and items would give me somewhat of an edge.

I’d be hard for me not to recommend this game to fans of either series this draws inspiration from, it’s not perfect and certainly the lack of multiplayer and the resets in the story can affect mileage for some but overall I take my finely crafted Leather Helmet off to Square Enix for yet again trying something new with Dragon Quest and firmly smashing this one out of the park.