Culina: Hands in the Kitchen arrived on PC (via Steam) from Lakeview Interactive LLC last week and offers gamers visual novel-esque character interactions & a meaty restaurant management simulation put together in the same package. Lets take a look and see if it’s worth putting a sizable tip with that bill before we leave… 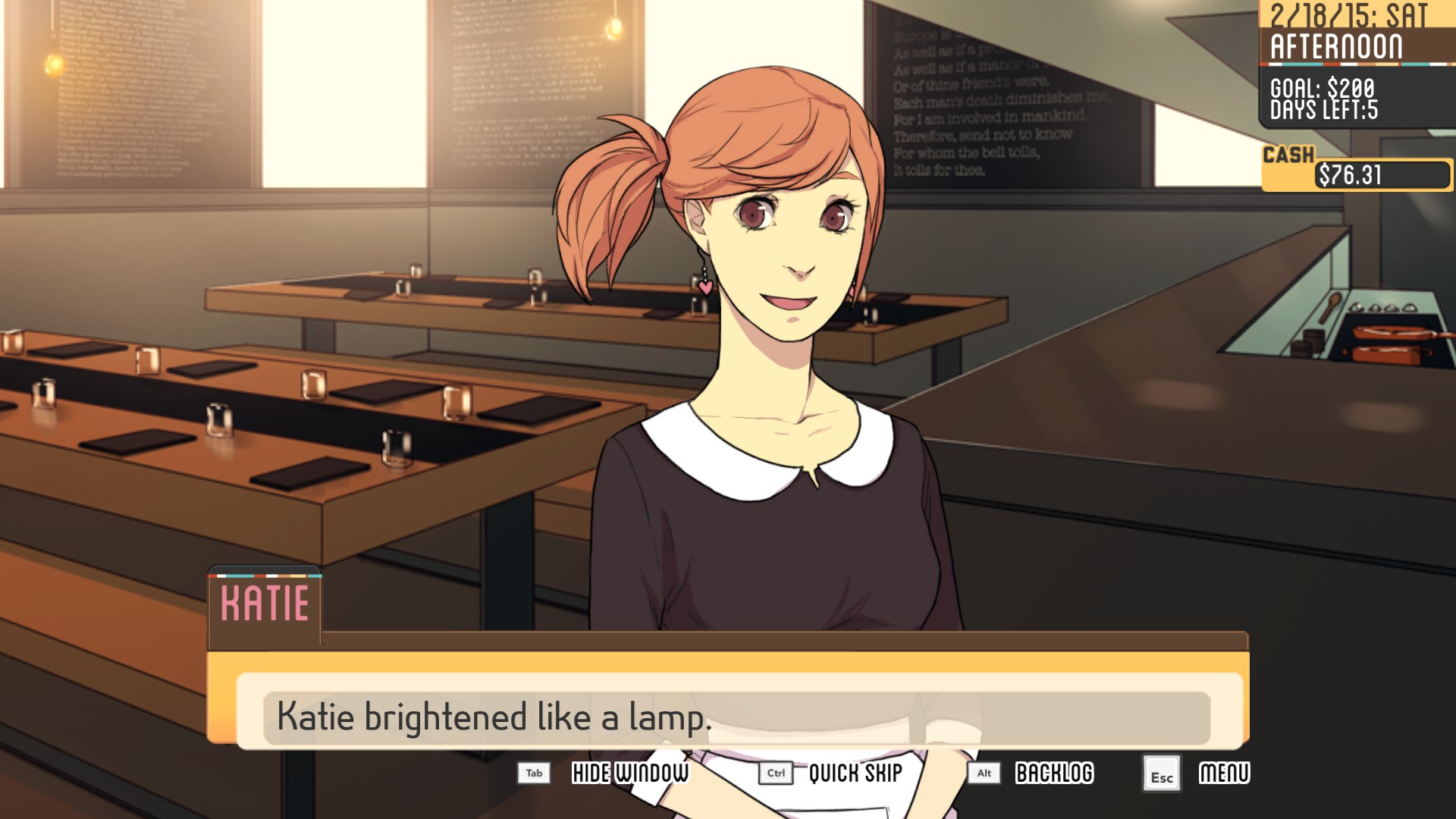 Culina sees you stepping into the shoes of a Culinary school graduate who is just on the cusp of opening their first restaurant. The first few days fly by as you complete interviews for a couple of positions (waitress & cook), with another couple of days spent visiting the few shops you’ll frequently visit to restock supplies and get to know the shopkeepers. It’s not until you are on the cusp of opening the business that your parents decide that you have to hit a certain level of profit by the end of the week to see if you can handle the situation. A bit of a downer, but now it’s time to jump in at the deep end.

The story is mainly there to set up the world and situations you’ll be in with certain characters, so you may be a tad disappointed if you’re expecting a deep narrative. There are some back stories with some of the cast too, in particular the lady in charge of the spices shop that makes for some interesting exchanges. It’s these exchanges and interactions with the other characters as you build a rapport that makes it worthwhile to play through, as these relationships also have a bearing on certain aspects of your business.

Even though I prefer my visual novels to have dat moe, I still liked Culina’s clean overall look. There’s some good detail to the games backdrops and each character gets their own unique looking store to visit, that even changes slightly as time passes each day. Character designs are a tad hit and miss though. They all look unique and match perfectly with the colour palette used in the backdrops, but some seem better designed than the others. It’s likely a subjective thing to be honest. There’s some animation as well, with various expressions, but the characters don’t quite pop in this regard tho as it is a little limited to these couple of areas.

The audio fits the bill. It’s relatively simple & cheerful, not really branching out but not sounding out-of-place either. An option is offered to change the currently playing track should you not like what’s playing at the time. There’s no voice acting on the package, which is expected and is not something you’ll miss much as the resource management aspect of the game is at the forefront. How is performance? Well my laptop (Core i5/8GB/HD4000) runs the game with ease and is relatively lightweight on the required specs listed on Steam too, so will run on most devices as it’s even compatible with mac & Linux/Steam OS. Even those with a Windows tablet could probably enjoy this game on the go. 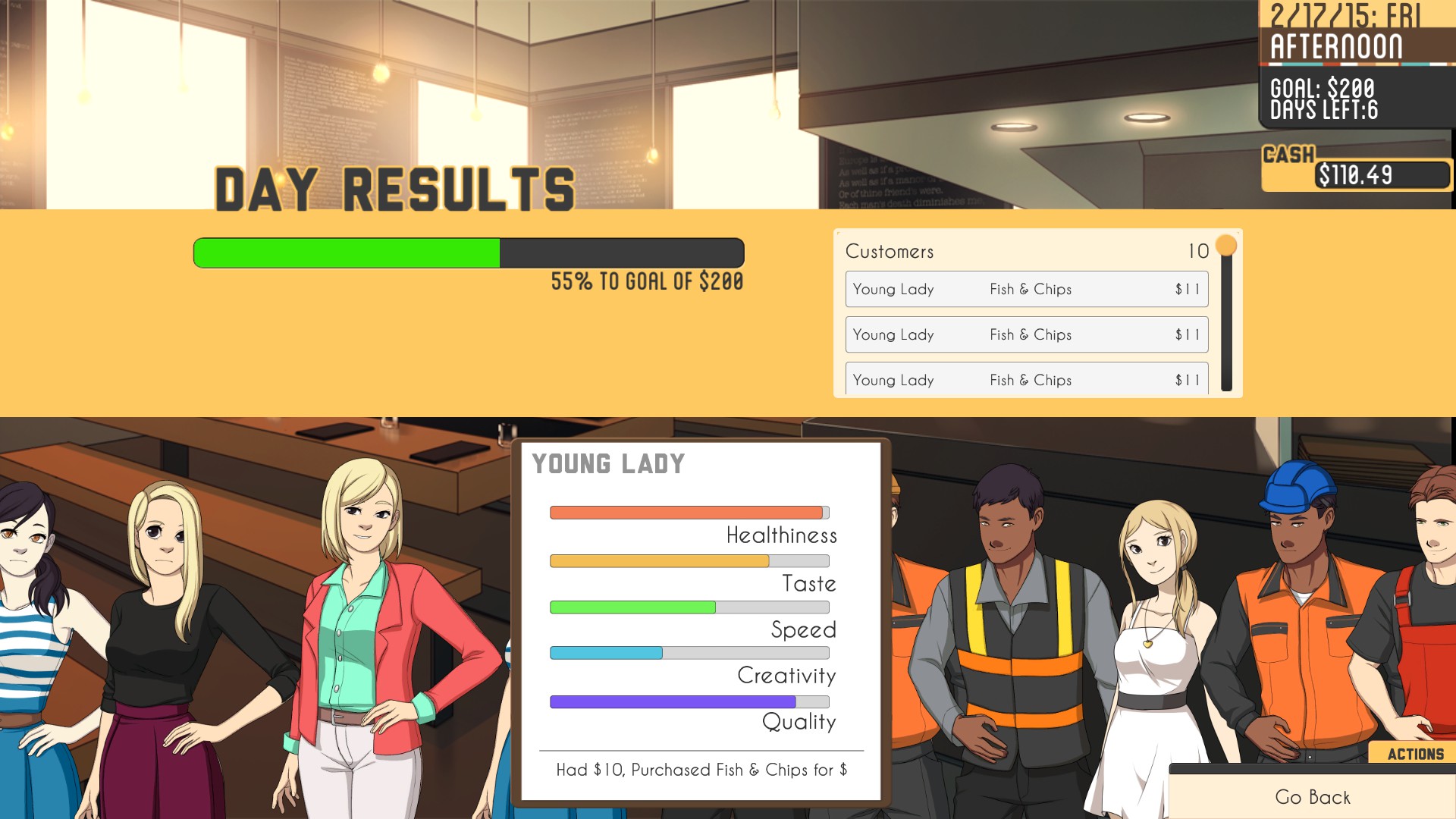 Culina manages to meld its resource management gameplay well with its visual novel aspect. The visual novel parts generally only come into play during interactions with other characters, offering choices within the conversations that can affect their attitude to you. The better your relationship, the more benefits you’ll get from them – such as new ingredients or discounts. You can also go down the romance route with the other characters, as the game offers scenarios outside of managing the restaurant that lets you get to know them a little better.

Managing the restaurant is the main aspect of the game though, failing to hit your weekly profit limit will mean failure. Keeping you menu well stocked with recipes is the key to success, but careful tinkering with your profit margin on each usually dictates how popular said recipe will be. Of course with ingredients costing money, it makes for a precarious balancing act. It was squeaky bum time on the last day of the opening week as I needed to turn a healthy profit to clear the $200 target. Luckily, those few extra Tofu’s I bought did the job. Once past the first week you’ll unlock another store to visit that allows you to upgrade your shop & skills. Yep, even more money management required. The first couple of weeks in-game can seem a little overwhelming, but it does click after a few days. It may seem like your restaurant is just keeping its head above water most days if your management isn’t absolutely spot-on, which is really the only aspect of the gameplay that grated on me.

Culina: Hands in the Kitchen is a really solid effort. It manages to meld both aspects of itself together almost perfectly, with each having an effect on the other to make both worthwhile. Whilst the management gameplay is easy enough to get to grips with, it can still frustrate unfortunately. Still, there’s a good game here to enjoy if you’re looking for something a little more laid back than the usual fair.