Blood Bowl 2 is the next generation sequel to the 2009 game Blood Bowl, both of which are based on the Games Workshop boardgame. Developed by Cyanide and Published for PS4, Xbox One and Windows by Focus Home Entertainment it is a turn based strategy sports game. In this review we will be looking at the PS4 version. 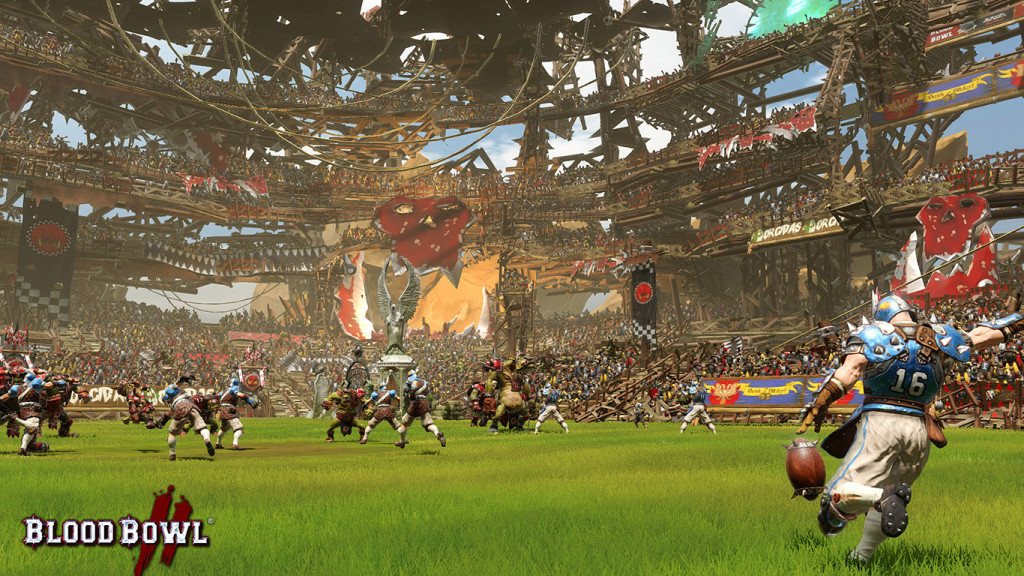 Blood Bowl 2 takes the relatively simple concept of American Football, mixes in a lot of brutal gameplay and piles on the complex stats and dice roll mechanics well known by any Warhammer fan. Bringing massive improvements over its older brother as well as opening the series up to a bigger fanbase with wider coverage, a better tutorial system and features like leagues and streaming capability it is obvious that Cyanide has put the last 6 years to great use.

The campaign revolves around you as manager bringing the Reikland Raiders back into the limelight of the Blood Bowl league, but having to deal with traitors, industrial accidents, injuries, the general ineptitude of your team and various other events which will add unique modifiers to each of the matches as you progress. You will have to pick your team, train them up and upgrade their home stadium to bring the Raiders back to the top.

The gameplay has been vastly improved over the original title, but still retains the core concepts that were originally set out. You take control of your team in a turn based match where you attempt to get the ball to the end zone and score, this seems very simple at first but you will very quickly discover just how deep it goes. Almost every action, be it running, tackling, evading or throwing requires you to roll a dice set based on your characters strengths to dictate the outcome, with a system which seemly relies on luck it is actually surprising just how much learning is required, if you fail an action with any player then you get a “turnover” and it becomes the oppositions turn to play. This means that you have to learn to hedge your bets and only gamble when you absolutely must. Aggressive players without forward planning will find themselves easily beaten just because they will lose many chances to actually play. Players who plan will find it much easier except for when they come across any of the minor glitches and times when the game is unfairly set against you. 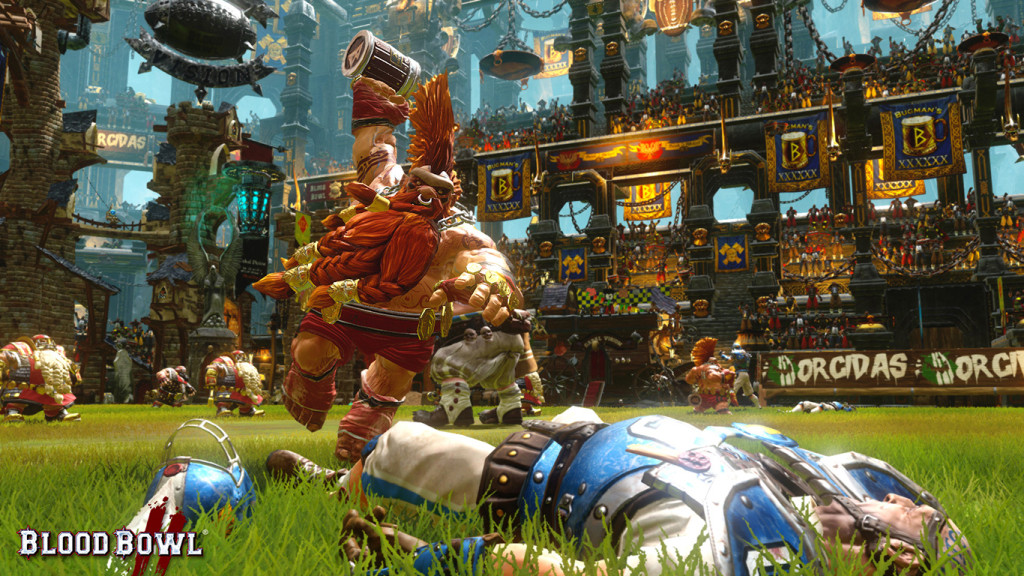 This combination becomes both Blood Bowl 2’s biggest success but also its most rage inducing feature gameplay wise in that when you choose to make a play it becomes a numbers game. Imagine this scenario: Both teams are level pegging with one turn left to play, your team has cleared a route for your ball carrier leaving only one opposition player standing before him. You decide the route to the end zone, your plan executed to perfection, the opposition player trembling before you with a 30% chance to block your dodge, your carrier deftly dodges him only to fall prey to that 10% chance to trip over from pushing too far that you ignored as nothing two squares before the endzone and goes down with all the grace of a drunk. Head in your hands, you take the risk of the reroll, exactly the same thing happens again and victory is stolen from you in the blink of an eye. Moments like this are when Blood Bowl 2 elbows you in the ribs with all the brutality of one of the games fouls and reminds you that under the glossy FMV, comedic commentary and amusing injuries that you are playing a Warhammer strategy game, not your typical sports game so stats are your friend and numbers can quickly become your enemy without warning.

Each of the races have a specific preferred playstyle. Humans are very adaptable and can play most styles, whereas the Elves are more of passing teams trying to exploit gaps in the field. On the flip side of that you have the Dwarves and Orcs who excel at caging, wiping out the opposition and stalling. There is generally a team for any playstyle and there is still a limited amount of room to use other tactics successfully but it is often best to stick with what they are good at.

The gameplay however is not quite flawless and mistakes have been made. Even though the tutorial system has been improved to make life easier for newbies to the series and Warhammer on a whole, it is still only a fairly basic tutorial and will not carry you all the way, especially if you are the type of player who wants to jump straight in with your friends. A fair bit of research materials are available online based around the original board game that outline the playstyles that each race are more suited to, the problem is this never gets pointed out so you will have to find this off your own back (it seems that Blood Bowl 2 uses a modified version of the LRB6 ruleset found here for the Warhammer fans) . The early game tutorialised missions also suffer from a serious flaw, although it is more of an annoyance than a breaking issue. It is quickly apparent that during these early missions the game wants you to take specific direction to be able to show off the features and the dice system reflects this direction they want to push you in, the issue is that the tutorial silently pushes you in that direction without giving any specific indication of what course of action they want from you.

There are a number of features in Blood Bowl that do not exist in American Football, all of them coming with risks and rewards. For example you can use a turn to foul a downed player, if you are successful then there is a good chance you will either seriously injure or outrightly kill that player and remove them from the game, some injuries can be permanent and lead to that player becoming useless to its manager forever. The opposition manager is able to use a revive resource to save a killed character and keep them in as injured but this is a limited resource. However if you fail the roll then the referee may see you and issue a red card removing your own player, if you are lucky then you may be able to bribe the ref to reduce it to a yellow card but again like all of the game play it is all about risk and reward.

All of the features presented in the campaign are brought over to the multiplayer allowing you to set up and play leagues against your friends as well as a Transfer Market for trading your players and setting up a better team. All of these features work well but are entirely optional as the single player is more than enough if that is what is wanted. 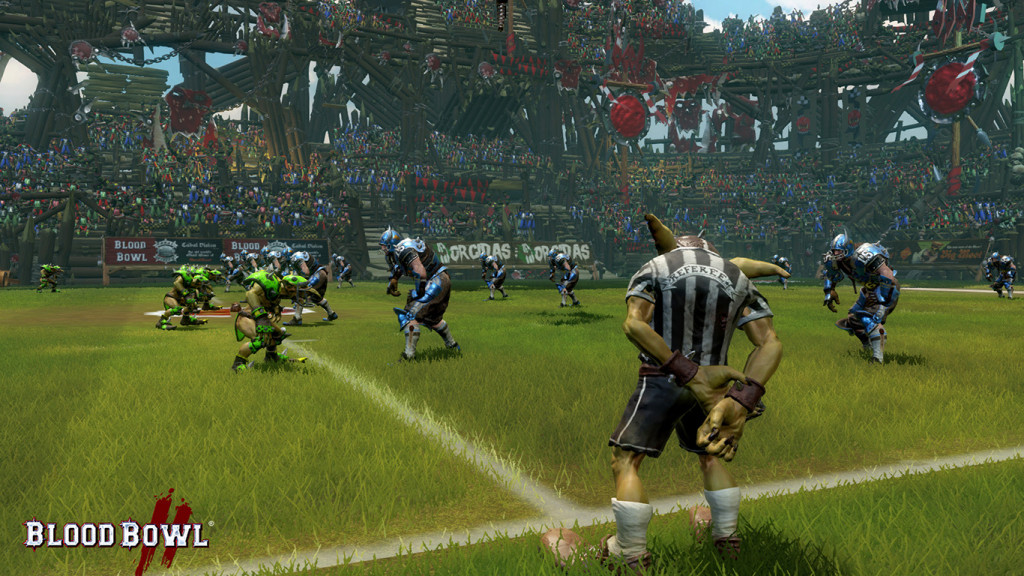 Graphically speaking again there is a big improvement over the original. Everything is very stylised but the character graphics and animations are bold and silky smooth. Because of the mostly isometric viewpoint it is obvious to say that Blood Bowl 2 isn’t going to blow you away graphically but that is because on the most part it doesn’t need to. It is pleasant to look at, the FMV’s for fouls etc are bloody & enjoyable and with the very active crowds it was nice to see that as much work was put into their animation as everything else.

The sound is another area where Blood Bowl 2 really shows itself, there is very little music but where there is it blares out at you like you were actually at a match. The sound effects of the players and tackles are meaty and strong, exactly what you would expect it to sound like. The biggest plus though is the very witty commentary provided by Jim and Bob over the Cabalvision system (basically a tv broadcast) both the characters are wonderfully voiced, and written to work together so well you sometimes forget that it is pre-recorded. I found myself chuckling quite a few times at some of the jokes put out about the game at hand, as well as the sly references to real people. 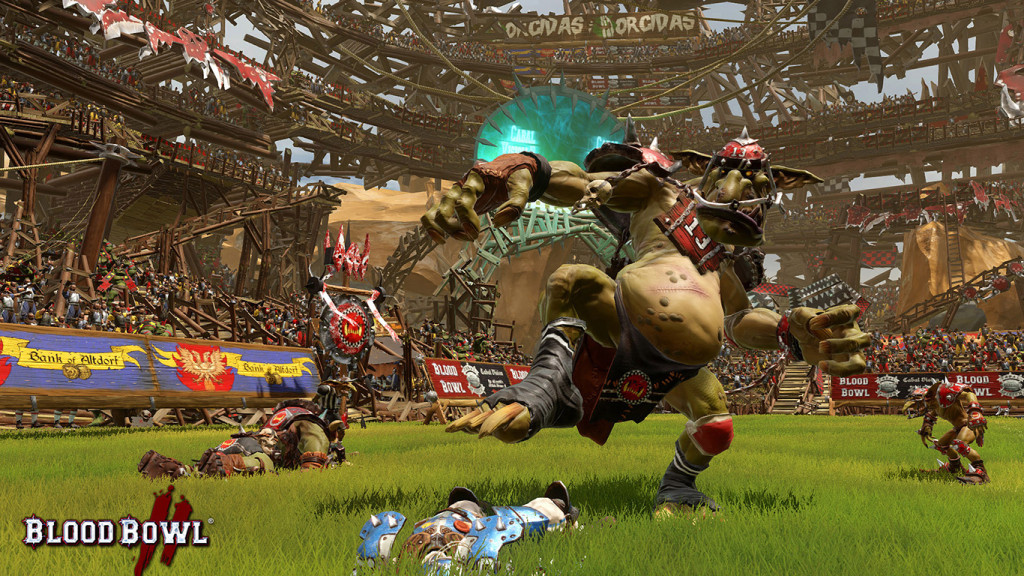 The most serious sin Cyanide have committed with Blood Bowl 2, and this is one that has left many fans up in arms is the fact that although Blood Bowl 2 contains 8 races, the Humans, Orcs, Skaven, Dwarfs, High Elves, Dark Elves, Chaos, and Bretonnia. The Lizardmen and Wood Elves were chopped off for pre-order DLC. With the Lizardmen going to PS4 players, Wood Elves to Xbox One players and Steam players getting to choose one of the two. By the end of its lifespan Blood Bowl 1 had a free expansion as well as 2 paid edition expansions which had bolstered the roster to 24 races, but Cyanide’s plan with 2 seems to be individual race DLC purchases as time goes on making for a very expensive purchase if you enjoy all the races. This alongside the dropping of many of the classic team rosters has annoyed many series fans.

Blood Bowl 2 is an absolutely fantastic game, an almost perfect digital vision of the Warhammer boardgame which suffers from only a few janks in the gameplay as well as some supremely frustrating moments and poor choices when it comes to expansion. Easily worth the purchase by fans of American football and Warhammer as well as just about anyone with an interest in strategy titles. However if you are used to playing Madden & Fifa and that is how you expect this to play then you will be sorely disappointed.