Yomawari: Night Alone is the latest release from Nippon Ichi. Following on from the somewhat dark puzzle based adventure htoL#NiQ: The Firefly Dairy, Nippon Ichi go a step further and embed this game entirely in the survival horror genre. Interestingly, both releases are included together with the launch of Yomawari: Night Alone, which will no doubt make it even more enticing for Vita & PC gamers. Let’s take a look and see if this game can entice one to brave the darkness.

The game opens up with our young protagonist taking her dog Poro for a walk, but an accident sees her losing sight of her pet. Upon returning hom, her older sister is waiting and she ends up going out to look for Poro. After waiting a good while for her sisters return, our young protagonist decides to leave the garden and head out to look for both. This is where your adventure in this eerie town begins. The game has very little dialogue, which really drives home the fact your are alone, as the story unfolds during gameplay as you play. This may put off those expecting something akin to a deep narrative, but the reason for this situation in town and the girls personal journey does still come to the fore as you progress.

Outside of the game’s story mode, there isn’t anything else. Collectors won’t mind too much though as there’s plenty of collectibles within the world to find that updates your scrapbook with a little info on it. The town is relatively open, which means you can free roam at your leisure. A few times you may run into an entity blocking you path, but the surprising size of the town means it won’t bother explorers too much as you can also fast travel between the statues which also act as quick save points (don’t forget to return home to actually save the game before closing) To use these you’ll need coins to offer in tribute, so chancing some exploration also becomes a necessity 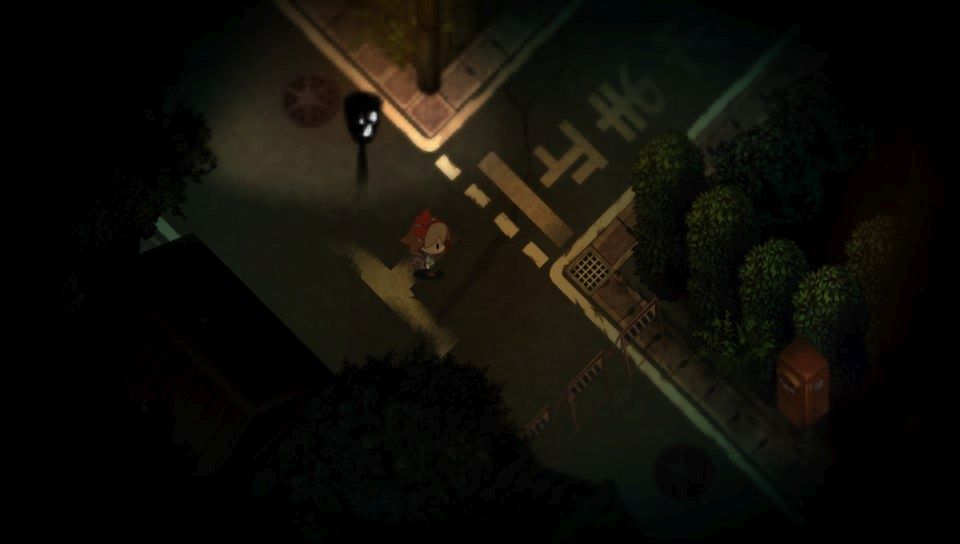 Yomawari has the feel of an old school survival horror. It’s just you and your flashlight in a dark village surrounded by ghoulish entities. If you’ve played the classic Resident Evil games then you’ll have an idea of how the game is structured. Most of the time you’ll be aimlessly wandering around the town avoiding foes and looking for that item needed to pass a certain point. Avoiding the enemies and managing your energy level is key, as one touch from any of the ghoulish creatures is game over. The closer you get to foes, the faster your energy drains when running, which makes for some tense moments – being able to hide in a bush till the area clears makes for a great breather when chased though. Learning attack patterns will also help in the long run, with the numerous enemy types offering many different combinations.

You may find yourself seemingly killed from nowhere at times, as the flashlight you carry is your only means of illuminating some of the creatures out there. The main problem though is when the game leaves you wandering aimlessly in the darkness. Take the second chapter for example. [Spoiler] To advance the story you have to get your sisters shoe from a dog type creature which needs to distracted. To do this you need to get a bone from the pool, which is locked. The key is in a chicken coop, which is locked – so you have the key from the dumpster area. The game didn’t seem to give any inclination to this as the scrapbook used to keep track of progress is quite vague at times, so I was left creeping around the darkness till I happened upon the dumpster area. Still, aside from that I don’t have many quarrels with the gameplay and enjoyed its throwback nature. 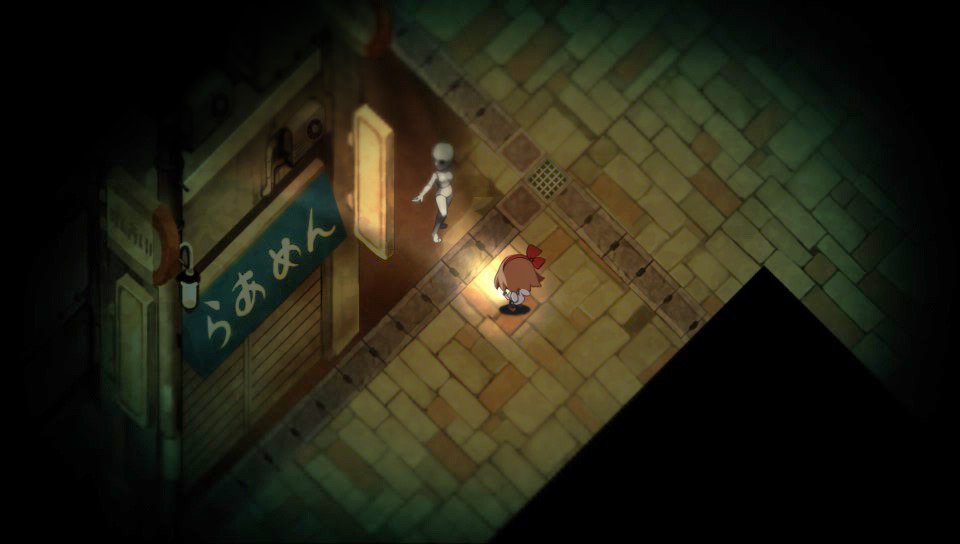 One area the game nails with aplomb is the atmosphere. Going for a sprite based outlook meant a good amount of detail could be put into the environment, with the girls cute & bright design creating a good contrast to the eerie town around her. The creature designs also add to this, with a notable amount that look unique to the next and suitably designed. Each area of the town is well detailed and you’ll notice as you transition from one area to the next, with the occasional flickering streetlight & neon sign offering rest-bite from the darkness. Performance is rock solid.

There was one oddity I noticed, although it only seemed to happen in certain areas of the town and at particular sections. Sometimes a few sections of the environment will seem to be slotting into place at a slight delay to your movement, making the background appear to be shifting. This is likely more noticeable when using the PSTV, which is how my playthrough went. As is usually the case with sprite based games played through a PSTV, the artwork scales well even though it appears a tad softer than when played on a Vita. The game’s audio is well done. There’s little there aside from ambient noises etc which is perfect for this game. It allows the heartbeat, which is used like a sonar for local enemies, to come to the fore when needed without being lost in a hectic soundscape. 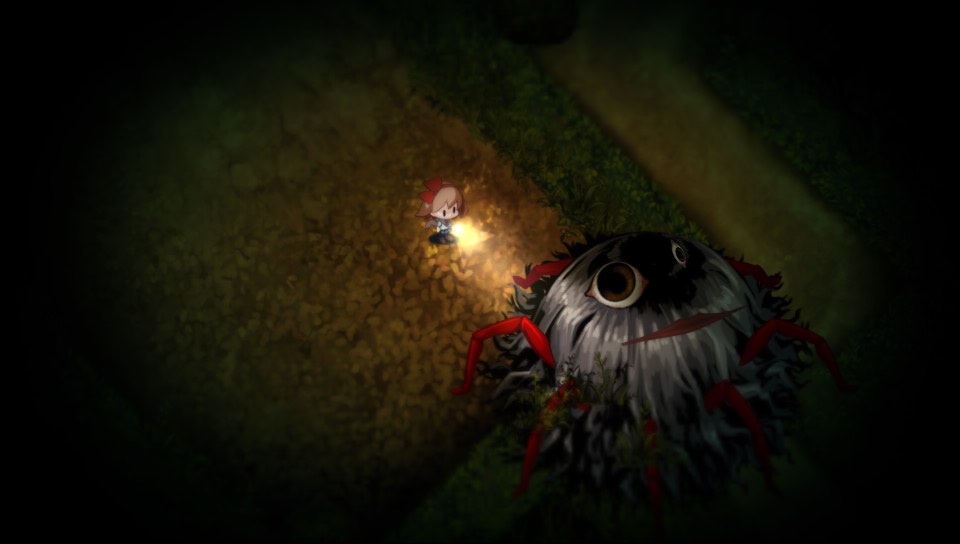 Considering the survival horror genre isn’t exactly top of my list, I still enjoyed playing through Yomawari: Night Alone. There were a couple of irritating aspects, most prominent the aimless wandering, but it excels in the things it gets right. The game’s atmosphere, exploration and creature designs are the games high points, which makes this highly recommended to those looking for a great survival horror experience on the go.