Otaku Reviews have been in the wild for a while, but they are now back with a bang. I have a few lined up, my Ps2 is now import game ready which opens up many wacky games to try, with todays Ikki Tousen: Shining Dragon being the first. This game was actually set for a localisation on Ps2 back in the day, before being canned by Valcom Games as it received an M rating. So did the publisher do us a favour in the west, or did we miss out on some hardcore brawling action? Let’s find out…

Shining Dragon offers fans an all new original storyline with Hakufu, Ryomou & Kanu forming the main characters of the arc. The story focuses on a new character in Chousen (a la Diao Chan) with each character offering their own route & interactions with other characters until a final bout with her is reached. Chousen has the ability to shape shift into the form of another person, so are you really fighting her the whole time? Highly likely given the reactions during the dialogue sequences, which are handled really well here with full voicework & good sprite detail. It’s a shame the dialogue sections really just set up the next fight and deal with the fallout at the end though as a lot more could’ve been done with regards to Chousen in particular. Still, series fans will likely appreciate whats on offer.

Once you’ve finished up the story there’s more to do. Mission mode is already available, but other modes such as Hitori de Cosplay Mode (unlocks a special outfit for your character to fight in) are unlocked during your time with the game. You’ve also got other fighters aside from the main cast in the story mode to get to grips too, but these don’t have a story and are only available in other modes

Once the fighting starts, your looking at a standard arena fighter. Each stage plays out almost the same, with a few waves of enemies pouring in before the main fight with your opponent starts. These sections are relatively easy, though the difficulty does rise the further you go in the story, and make for a good warm up that allows you to build up power before the main event. The main bout at the end of the stage will start needing that power up the further you get, as it not only allows you to access special moves but also boosts attack & defence. It’s a shame there isn’t much else to the games gameplay though unfortunately, not having the final bout play more like a 3D fighter is a glaringly missed oppurtunity, as aside from modes mixing things up a little you’ll be doing a lot of the same things. The game does have a stats system that allows you to customise a fighter’s stats using credits earned from your bout rating, but it’ll require a lot of slogging to max each characters stats.

The special moves also showcase another aspect of the game – cloth break. Indeed, long before game journos started strangling interns at the sight of a Senran Kagura release – we had cloth break on Ps2 too. The game also has plenty of panties to see and many jiggles, which is hardly surprising given the characters & anime that the game is based on. If you’ve seen the anime or manga (known as Battle Vixens in the west) then you’ll know what to expect, you may even appreciate it staying so close to source material in all it’s ecchi glory.

Graphically the game isn’t too much to write home about, given it’s a Ps2 game, but it does just enough with it’s anime styling to look good at times. This is most apparent in the games character models, which make the jump to 3D well. Each one offers a good resemblance to the 2D sprite from the dialogue sections and features unique animations fitting for the character. The special moves also pack a punch with some good effects work, with everything plodding along at a smooth framerate you’ll be hard pressed to see any noticeable drops on.

The smooth frame rate is no doubt helped by the games lacklustre arenas, which aside from the odd bit of decent texturing, lack detail and objects to help flesh them out more. Another aspect likely helping the smooth framerate is resolution. The Ps2 isn’t a HD console of course, but it’s obvious once the game fires up that this is using one of the lower resolution modes. It’s quite blurry when run through component cables – which also has the knock on effect of epic jagged edges which takes the sheen off the good character model work. The audio work is good though as the punchy soundtrack & voiceover work will delight fans of the series. 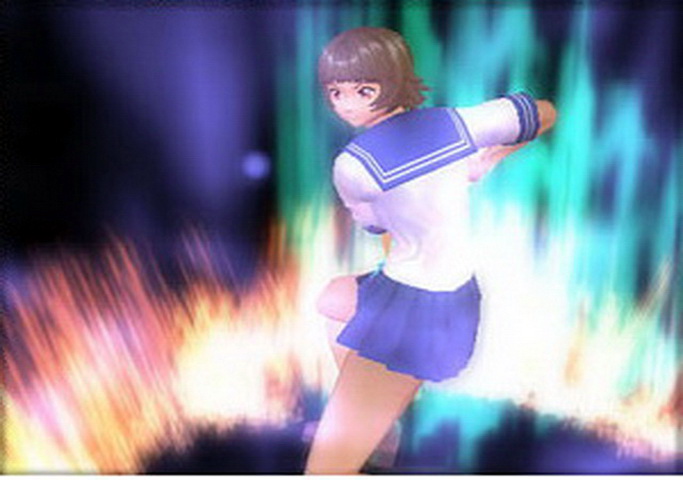 Ikki Tousen: Shining Dragon is without a doubt a fans game. Fans of the series will get the most from the game, with the story and plentiful ecchi being what one would expect from Ikki Tousen. The lack of depth to gameplay & patchy presentation brings things down a few notches, but it’s a decent enough title that’s best played in short bursts if the price is right