With Valkyria Chronicles Remastered set to land on European shores tomorrow, I thought it may be a good opportunity to bring a review from the archives. The English translation patch for Valkyria Chronicles 3 finally gave fans in the west an oppurtunity to try the latest release at the time, although the process of patching was laborious and required a specific version of the game & a hombrew PsP for iso dumping. Have fans missed out on a gem not localised, or should the nameless squad soldier on without recognition? Lets find out. 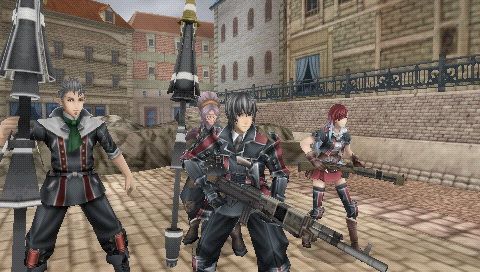 The story for this release returns to the setting of the original and does away with the academy introduced in the second game. It’s 1935 and the imperial army are invading the small nation of Gallia, so straight away your intrigued at the prospect of a side-story that compliments the universe perfectly. The story & characters are probably the biggest difference. While previous releases followed a heroic protagonist, VC3 follows the exploits of a promising young officer named Kurt as he is banished to the ‘Nameless Squad’ on the charges of treason. The ‘Nameless Squad’ is made up of criminal & insubordinate individuals that are forced to partake in suicidal missions or face a firing squad. Now I’ve mulled over it for a while and I must say I prefer the story setup for VC3 over its predecessors due to the themes it deals in and the interesting nature of the cast. The cast of characters are a notable highlight, as each one is introduced well with their own back story that makes getting to know each intriguing. You’ll no doubt end up settling on your favourites though. If your a big fan of the original, you’ll also enjoy the missions that sees the cast of the original fighting alongside the squad from this instalment

The game chapters are structured like a military tactical map, with your objectives clearly laid out ahead of you. On this map you can also access your base camp. It’s here where you’ll be spending the XP & money earned in combat to improve your squad with skills and equipment. A characters class & potential can also be changed here, so for those looking for complete control of squad development, there’s much to do. The units tank is also extensively customisable here as well. As you progress all manner of equipment will be unlocked to suit the needs of each upcoming battle. On the odd occasion you’ll be given a choice with choosing your upcoming battle. At first this wont seem to effect much, but later it will have an impact on the ending you will receive as this release has multiple endings to seek out. The game also throws in side missions during chapters you can use to grind a little to extra XP & money to ease those difficult missions you’ll eventually face. It’s here you’ll find the only issue with the games structure as it offers no mid-level save, yet most missions can take over 1+ hours to do. The portability of a handheld doesn’t always afford that amount of time between being able to save. Even with this minor issue, you’re looking at a huge amount of game to play through. The issue of having a console game squashed onto handheld may sound daunting, but it’s still a fantastic piece of software for the PsP. 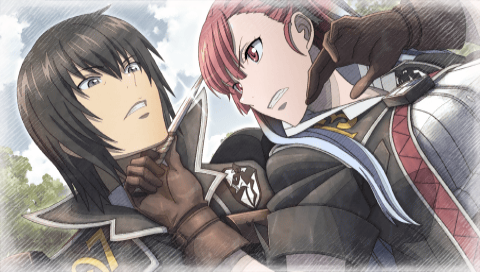 Those having sampled a Valkyria Chronicles release before will know what to expect with regards to the gameplay mechanics here as it stays faithful to its predecessors, with some additions too. If you haven’t played the series before then it can basically be regarded as an SRPG. Once the battle starts you’ll find yourself looking at the a local area map if the battlefield overhead in a ‘command Mode’. Here you have a clear view of sighted enemies and the positions of your own troops so you can plan your tactics accordingly. Once you select a soldier, which costs a command point, the game switches the viewpoint to the character that’s reminiscent of a 3rd person shooter. Here is where you’ll spend most of your time with the game. In this action mode movement is limited a little, a lancer can’t move as much as a scout on the battlefield for example, and each time a command point is used in this way your character will only be able to attack once. Using the right class at the right moment is key, as the scout would be useless when up against a tank for example, which is a task the lancer is suited for with its anti-armour weaponry.

Command points can also be used to issue orders to help boost your squad with the new addition of special abilities for Kurt, Imca & Reila. These use a new point that doesn’t replenish each turn, so using your few specials at the right time each battle will help immensely. Being able to group up a couple of other squad members with yourself for a single command point is also another underused facet that you’ll soon grow to utilise a lot. For the most part everything plays out exactly the same as.it always has done. Those returning will feel right at home while finding the additions add even more depth to the series staple gameplay. Newcomers on the other hand will find a superbly accessible SRPG that builds in complexity depending on just how much of it you want. As a fan of the series its hard to find fault with the latest refinement of the formula. 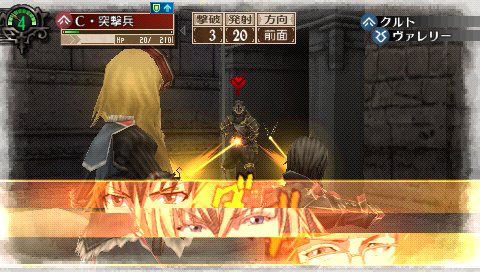 When it comes to how the game is presented, it doesn’t seem to make as big of a jump as the rest of the game seems to have over its predecessor on PsP. Still, there’s an added vibrancy to the visuals and a step up in character model detail that shouldn’t be overlooked. Even with the obvious gulf in power between the Ps3 & PsP, the locations still have the look and feel of the Gallian countryside and towns that were fought in during the original release. While the game lacks in-game cinematics or animated cutscenes, it still manages to convey its story well with nicely drawn stills and great voice-acting. The low resolution of 480×272 that developers have to work with on PsP doesn’t hamper the quality of the art yet again as working at native resolution keeps everything pristine. The art design follows the original release superbly, even though it’s not able to back that up with technical nous once the battles start with regards to it more powerful sibling. It’s still one of the better presented games on the PsP system though and there is hardly anything like glitches & slowdown to hamper the experience at all, with beautiful art and lush levels keeping you immersed. 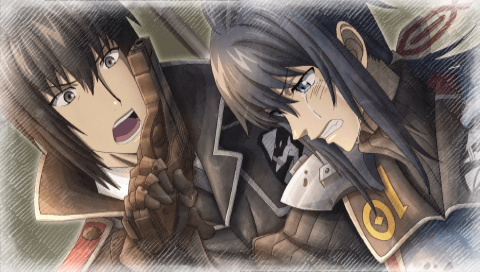 Being a marked improvement over its predecessor on PsP, whilst bettering the original with its darker themes & wonderful cast of intriguing characters, is a joy for fans. The trademark gameplay the series is renowned for is here with a few new additions to the formula to test your tactical mettle. The only crux with the game that prevents a perfect score is that, to this reviewer, the mechanics & structure seem more suited to console than the short-burst portability of a handheld. Still, don’t let that detract you from playing one of the finest handheld releases for several years.