Otaku review: Legend of Heroes – Trails in the Sky (PSP)

With the release of Trails in the Sky: Second Chapter and upcoming release of Legend of Heroes: Cold Steel edging their way closer to their European debut, I found myself returning to the 2011 PSP title. Before I move on I should explain a few things starting with the Legend of Heroes as a series, Currently it has 15 titles including 2 spin offs only 7 of which have or are been released in English. 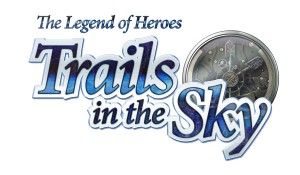 Trails in the Sky is one of a set of 3 titles within this series each being a chapter in the story as a whole starting with Trails in the Sky, moving through Second Chapter and finally but predictably ending with Third Chapter which Nihon Falcom developed and released in 2004, ported to PSP in 2006 in Japan until XSeed games acquired the rights to publish. Unfortunately due to the size and large amount of text for the game they did not localize until 2011. This was the first chapter in the series and the second has now released 4 years later however there is no word on chapter 3 as of yet.

Another title we will be receiving in January of 2016 from the Legend of Heroes series, Cold Steel is planned to be yet another first in a trilogy we are receiving in the EU although the second and third chapters of Cold Steel are still to be confirmed.

In Trails in the Sky you take up the role of a young women by the name of Estelle Bright, a bracer in training and a member of a guild that takes on all kinds of requests from the citizens of liberal kingdom/ These range from simple monster hunts to crime investigation and item retrieval what ever is needed a bracer is there. While the guilds tasks cover almost everything they are still a civilian organization, however they one of high praise and respect across all of the liberal kingdom and beyond. Fortunately Estelle is not alone in her training, her adoptive brother Joshua is by her side joining the guild along side her and travailing the world in order to become fully fledged bracer’s on a huge adventure full of twists and turns.

The story is set 10 years after the war between the Liberal and Erebonian kingdoms. A war which saw the death of Estelle’s mother and many others before its end leaving tensions high even to this day though a tentative peace and harmony have reined over the Liberal Kingdom under Queen Alicia II, however during the party’s adventures to become bracers they discover a plot to seize control from the Queen.

The colourful characters and many twists and turns really keeps you wanting to push on to find out where the newest piece of information leads and unravel the mysteries before you. 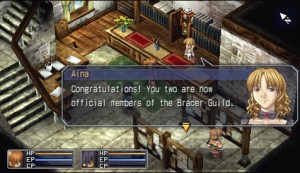 This title is vast and contains a huge amount of text, while a lot of this is optional depending on how you play and the quests you accomplish you will notice changes to how scenes play out and acknowledgements to your actions throughout the story giving a lot more depth than having two or three lines for NPCs.

As well as this the world is made up of a lot of maps from roads to dungeons, towns and homes that come from easy to navigate straight shots to packed towns and tricky dungeons where relying on changing the camera angle becomes useful, from path finding to finding treasure nestled under a tree the camera is an invaluable tool. The range of these maps is quite impressive one moment you can be travelling a road then suddenly taking an off shoot into a dense forest personally I love the designs of this world despite the images not been crisp and clear. 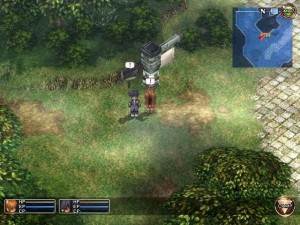 When outside of town the maps are crawling with danger in the form of monsters, as you enter the field one of the first things you will notice will be monsters wandering around that will display an ! if they notice you and chase you if they make contact a battle will be initiated. Sneaking up behind them instead yields a preemptive strike but in typical RPG fashion if you get stuck up on then you will be placed at a disadvantage. It can make a real difference on how battles play out, of course you can also use this to avoid battles entirely its entirely up to the player but adds a little more to the thought of how and when you should encounter foes.

Battles are fairly straightforward encounters with an enemy, you are taken to a map divided into square tiles with turn based actions with the options of move, attack , items, run, arts and finally crafts.
-Move- moves the character to a selected tile within their range.
-Attack- uses the characters weapon to deal damage, weapons vary in range as well as in type from swords to guns.
-Items- obviously uses items for healing ect.
-Run- may escape from battle (some battles can’t be escaped).
-Arts- Arts are in a sense the games magic system these spells take time to cast and are element based. They require EP to be used and the arts available to you change based on your orbments layout.
-Craft- these are character specific skills and very in effect and unlike arts don’t require additional time to be used but will require CP.
There is also a special type of craft called S-craft that requires a minimum of 100 CP and will be used the text turn regardless of when the users turn is.

Battles can be over in a single turn or extremely challenging depending on how you use this to your advantage one thing of note is the fact that as you level up you will see less exp gain making over training almost impossible and almost worthless, so you will be relying more on you equipment layouts and elements to give you the advantage. Combining all of this makes battles far more enjoyable than simply slashing through scores of enemy’s to flatten everything under your boots. 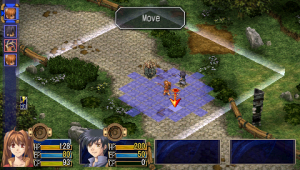 I mentioned orbments and quartz previously and I am going to cover them a little here in as simple a way as I can.
Orbments- A device similar to a pocket watch (at least in the case of the characters equipment) in appearance which require quartz to be set into them. This leads to a number of effects due to the Orbal energy produced a mysterious self renewing energy and are used for almost everything since the Orbal revolution from lights and radios to guns and even airships.
Quartz- Is a material which is refined and socketed into a Orbment, this draws out the power to provide a variety of effects that are almost limitless.

In the case of the players these effects vary from parameter boosting to healing and elemental attacks, sometimes offering more than one of these benefits for higher quality quartz and using combinations of quarts will also unlock additional skills. Though this may seem like a confusing system in theory in practice it is quite simple to use and makes for a high level of customization.

Graphics are far from perfect and in this day and age would likely be shunned into oblivion however its 11 years old and as a PC to PSP port im hardly expecting PSV quality. Even when I first picked it up and saw the less than crisp imaginary it is not a bad world to look at by a long shot and transference between the many maps is quick without annoying load times, a good thing considering how many you will be going between. 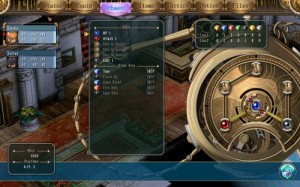 To sum up this is a beautiful title offering the player a interesting story and vast world that keeps you pushing on as well as giving you choices on how little or how much you want to invest into it. Couple it with its unique style in customization and you have a enjoyable title, I have recommend this game to friends in the past and would do the same for our readers.