This game is based on an 80’s first person adventure game with a point and click system of the same name. Its more of a reboot than a remake, but that isn’t necessarily a bad thing.

Released on PC via Steam on 21st of August 2014. This adventure title has been developed by the team at Zojoi and published by Reverb Triple XP. At the time of this Otaku review Shadowgate 2014 is available on Steam for only £10.99 making it a very worthy purchase for its price. There is a digital special edition available which includes a digital art book, NES soundtrack, map and several wallpapers.

I really enjoyed the art style, it has a watercolour paint kind of effect, but you can press F1 and you get a pixel effect, which changes it all to an old MS-DOS style, which can give you a great feeling of nostalgia if you played a lot of games like the Monkey Island series. Personally, I keep swapping between the 2 just to see how they both look in comparison and honestly, they both look as beautiful as each other in their own right. When you transition to a new screen too, you’ll zoom in on the entrance to where you’re going and the screen will fade out then in to the new scene, or you can set this to nostalgia mode too and have the classic transitions, complete with nostalgia sound effect! 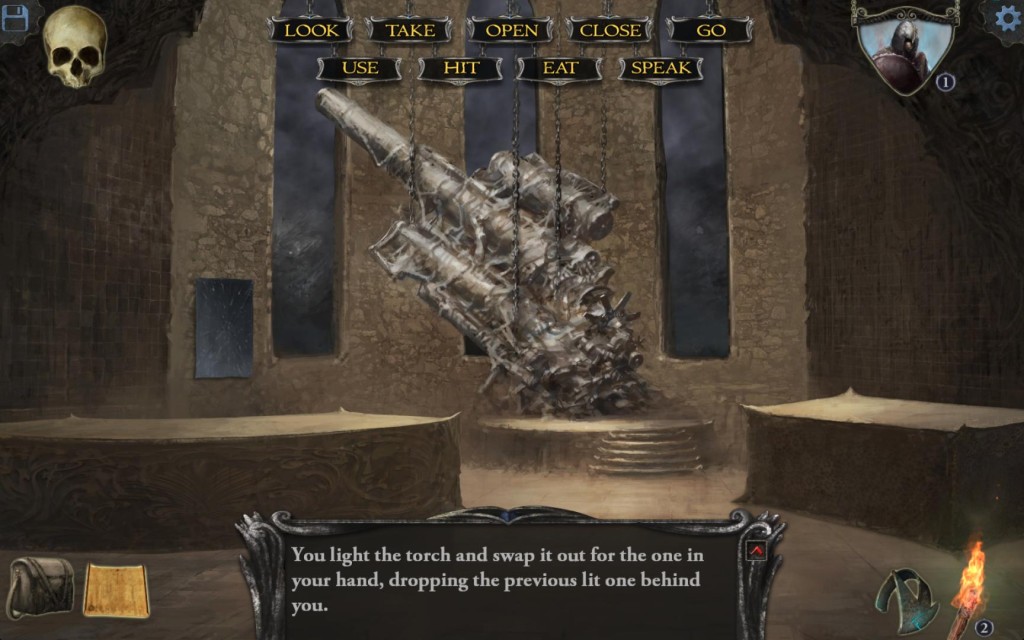 I also really like the music, its not the kind of thing I could listen to on its own, but it really suits the atmosphere they have given to the environments. You can listen with the original soundtrack too, but honestly I’d recommend the new soundtrack, its just a lot more fitting.

I have had a lot of fun playing through this, almost as much as I did when I played the original on the NES, it feels good, looks good and sounds good.

The original didn’t have too much of a story, you’re a warrior in front of the castle Shadowgate who has been sent to kill a warlock. You pick up scrolls that give you a hint of where to go that may as well be in some Alien language, for instance, “Five to find, three are one. One gives access, the Bladed Sun. The Silver Orb, to banish below. The Staff of Ages, to vanquish the foe. Joining two, the Golden Blade. The last to invoke, the Platinum Horn”.

This doesn’t make it a bad game though, however if you lose interest in things quickly, this probably isn’t for you. The remake, however, whilst it still fairly cryptic, gives you a companion named Yorick, who is a skull you can pick up at the entrance of the castle. In terms of story it has changed too, its a little more in depth, every once in a while you’ll come to an obelisk, which when you cast a spell on it a wizard named Lakmir will appear and a cut scene will play. 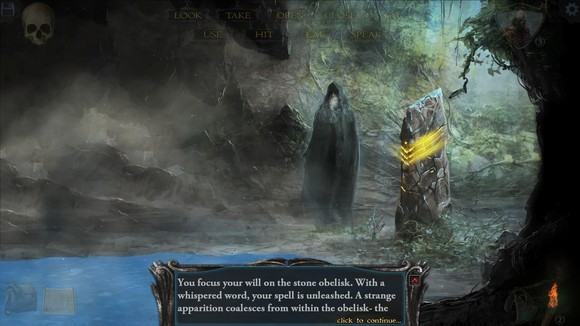 There is also a difficulty system, which makes the puzzles easier/harder, and on easier difficulties it stops you from making decisions which will lead to a cheap death (this is probably the only game I know of where you can get killed by picking up a book.) which, if you haven’t saved in a while, will bring out a little bit of rage. 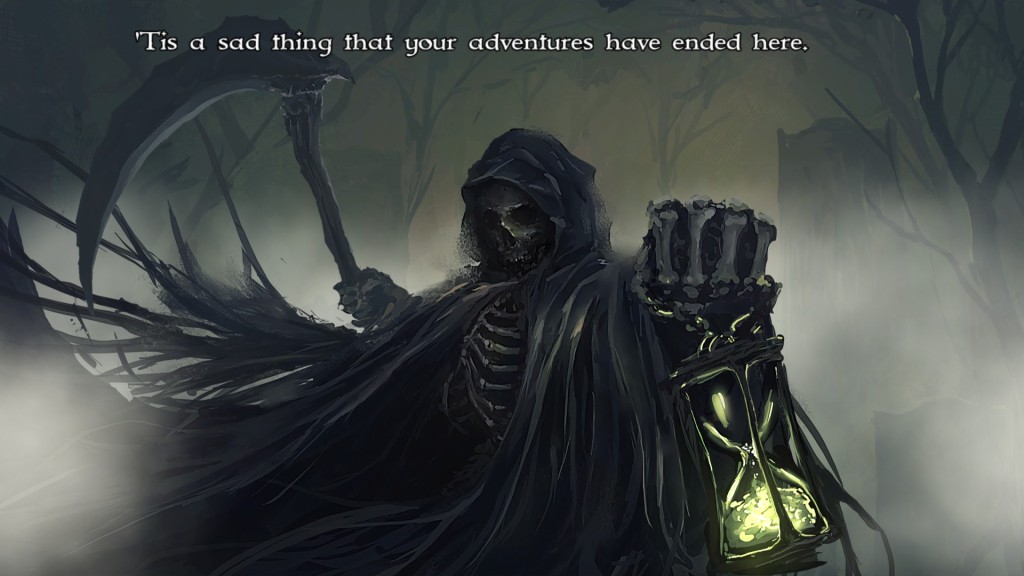 There’s a lot you have to keep an eye out for in this game, as you adventure you’ll come across runes, which you’ll eventually need to go back and look at. You absolutely must keep an eye on your torches, because if one of them goes out its game over. You’ll have to keep burning rugs to see if a key is hiding underneath, and need to look for stones that seem a little off (which can be next to impossible unless you know where they are at times, the list goes on. It can be tedious, but its really enjoyable at the same time.

I’ve enjoyed playing this from start to finish, and I did need to consult a guide a few times, but how else was I supposed to know I needed to go back to the start of the castle, just to look at a bunch of rocks which opened up a mechanism that looked like a dodgy underground clock just to get an item? This game doesn’t hold your hand, as I’ve mentioned, it’ll give you cryptic clues some of which will just jump out and hit you right away, whereas the others are moonspeak.

Personally, I thoroughly enjoyed this game and I’m going to give it another run through. I might be a little bit of a masochist considering there are Steam achievements I eventually want to get, which include finishing side quests and completing the game in under 500 moves, but I have a feeling it’ll be worth it.

If you see this on sale, I recommend it, and believe it is something everyone should have a look at and see how they feel about it.