On July 26th Asterisk War: Phoenix Festa hit western shores on PS Vita but, is this video game adaptation of the hit anime series worthy of being a Festa winner? or will it fall before it even gets past the preliminaries? 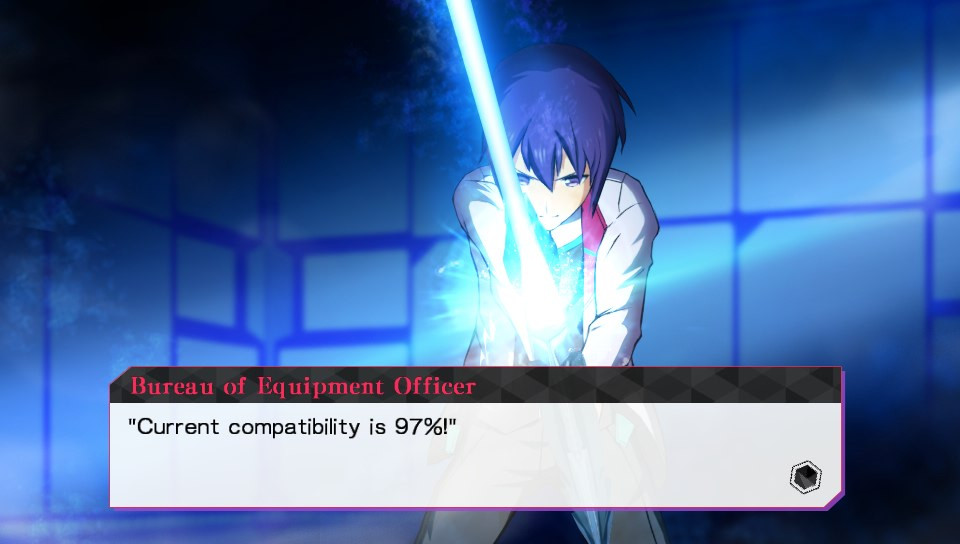 The story for A.W. :Phoenix Festa sees you play as the main protagonist from the anime Ayato Amagiri or your created avatar, who has just transferred to Seidoukan Academy, which is part of the floating city of Asterisk,  upon arrival  you are tasked with picking a partner from the games many heroines to be your partner in the Phoenix Festa tournament. After choosing the girl you want to be your partner you must deepen your relationship with them by going on dates, giving them gifts, training with them etc.  If you choose to play as Ayato, that the game basically give you a big advantage early on and this makes the first half of the game really easy whereas if you choose to play as you own avatar then it is a lot more difficult as you do not get the as many bonus’s as you do when playing as Ayato.

Most of the game, apart from the battles, is played from a single menu and from here you have a variety of options available, some of which become available further into the story, to help you progress through the story and develop your character further like Training for developing your characters overall stats, Shopping for buying items, weapons, gifts for your partner, Appointments for settings dates or duels with some of the games characters and Jobs for earning money to purchase items.

The Job system makes it very easy to make money in this game, you take on request that go up in difficulty but the objective never changes, these normally involve either helping someone train, defeating a specific enemy or number of enemies and the reward is a huge amount of money which also increases with the difficulty. So you can just keep grinding the toughest quest until you have enough money to buy the most powerful weapons in the game or the best present for your chosen partner. 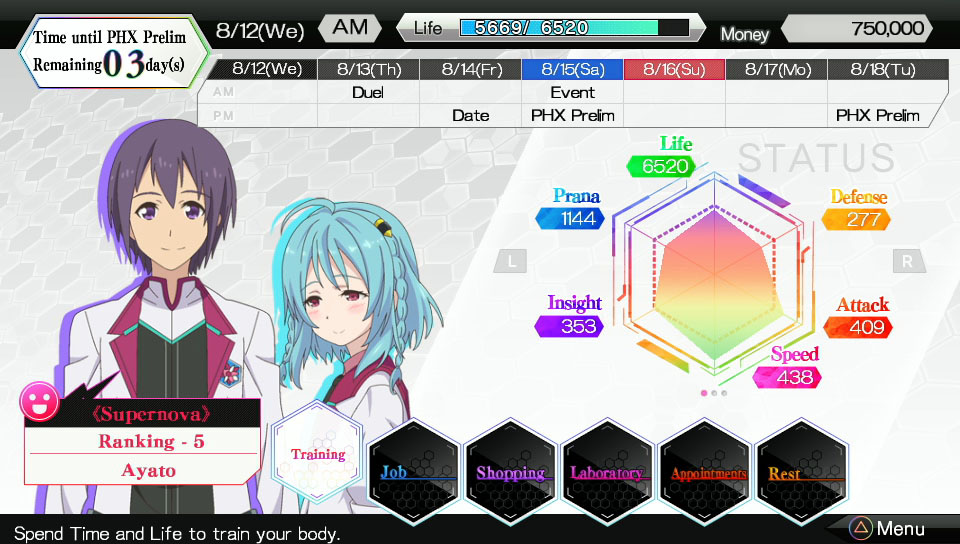 The game progress very quickly as there isn’t much that you need to do after selecting an option and with every action you perform taking up half a day, when dates and duels can be set at days in advance, sometimes you’ll find yourself skipping over days just so you can get to that chosen day. On top of when requests are made characters can reject request so sometimes it feels pointless when your trying to focus on a specific girl and they are constantly rejecting your requests but, perseverance pays off in this game because eventually you can gain enough intimacy through daily events that you will eventually get the character you want to accept your requests and from there eventually they will accept the request to your partner for the Phoenix Festa.

The battle system for this game works really well because it’s so simple and suits the games tournament style objective. Similar to other Bandai Namco games like the Naruto ultimate ninja storm series and Dragonball Z games, you have an arena style stage and you have to defeat single/multiple enemies and your objective is to defeat them by knocking them unconscious or by breaking their school badge. The play style does differ slightly depending on whether you chose to play as Ayato or your own avatar and also what type of weapon you pick to battle with e.g. Sword/Long Sword, Fists, Spears but the premise is basically the same as most of the time you find yourself using the same combo over and over until the enemy is defeated. This does make the game feel a little repetitive as the battle style doesn’t really change much throughout the game apart from the inclusion of link/special attacks with your partner later in the game but, it does break up the game by giving you a break from all the reading you have to do during the games story. 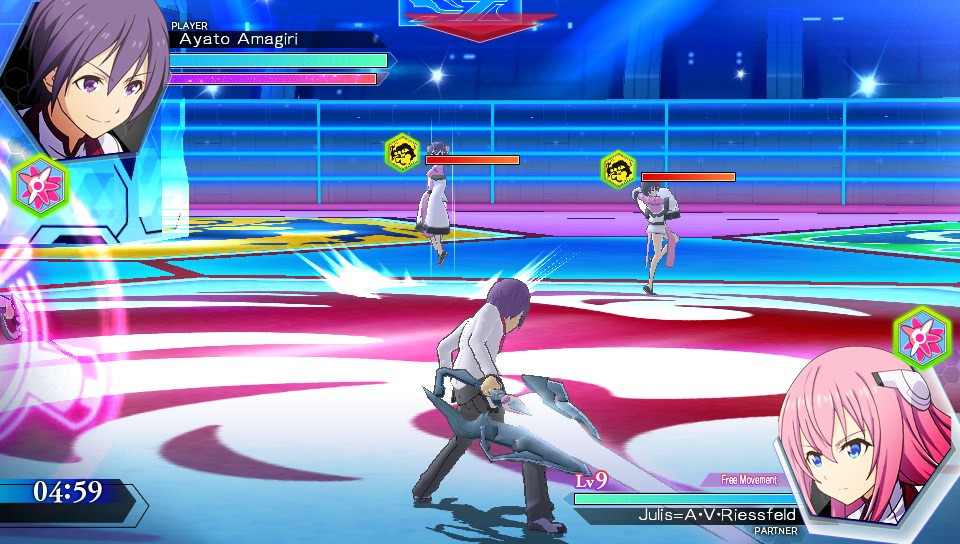 One of the good features which was a nice touch was the interaction between partners during battle, if your partner had an exclamation mark above them during in battle and you tapped their icon, there would be a conversation between your character and them, this was a benefited to your character as it allows you to increase your intimacy with your partner without having to use up an action outside of battle.

In terms of visuals the game does not disappoint, whether it be the locations from the series, the interaction scenes between characters during story events or the character specific screenshots shots, these are all portrayed really well while keeping true to the style of the anime which will appeal to fans of the series. The character and weapon models during battle are well designed and suffer from the animations during special and regular attacks are smooth and do not seem to suffer from many issues which makes the battle game play more enjoyable. 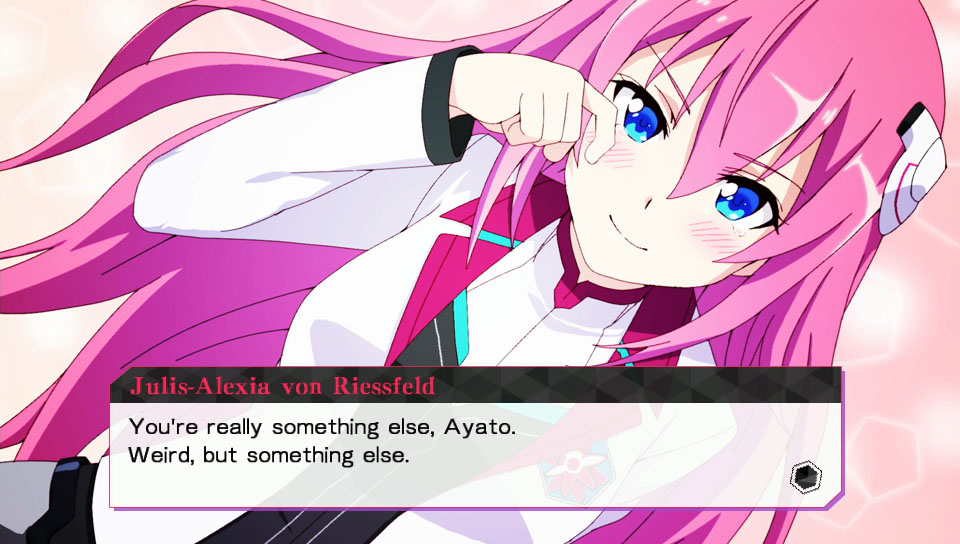 A.W. Phoenix Festa is a refreshing change the simulation/dating sim genre, for fans of the anime or people who have played a similar type of game before it won’t disappoint as it combines old school dating sim mechanics with a new twist and provides the humour, entertainment and of course a sprinkle of fan service. For newcomers to this type of game it will provide and insight into how these games work without completely overwhelming them with a barrage of text based game play.