This review originally ran on our old site on April 3rd 2014, as part of the build up for the upcoming JoJo’s Bizarre Adventure: Eyes of Heaven we are re-running this review from our good friend Steel Ball Jack, JoJo enthusiast, YouTube Hit and Streaming sensation, click his name to hit up his YouTube channel or follow him on twitter @steelballjack 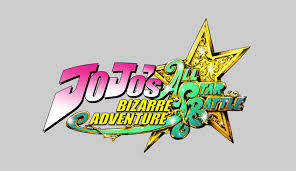 Hey everyone my name is SteelBallJack, self-proclaimed king of ジョジョの奇妙な冒険 aka JoJo`s Bizarre Adventure, I am obsessed with the manga (in Japanese) and I have an immense knowledge of anything related to JoJo ( so please ask me anything).

Why am I telling you this?

Well I will be reviewing the ジョジョの奇妙な冒険 オールスターバトル (JoJo`s Bizarre Adventure All Star Battle) game for the Playstation 3! It has been out for over 8 months now but I have busy so this is why I am doing the review now.

So anyhow let`s make this easy and go for review based on components of the game, I love my JoJo but I am not entirely biased and will show my dis-concerns the game has shown me.

In terms of game types there are: Campaign, Story, Versus, Online in terms of battle modes and Gallery and Customization for other modes.

Allow me to show you the controls so you can get an idea of the game:

(Hold the above to perform a full on run!)

X + Up/X + Down: Towards the Camera/Away from the Camera step 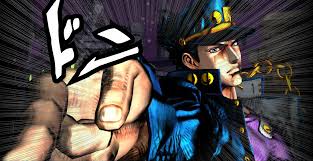 When the game came out Part 1 (Phantom Blood) had already finished and Part 2 (Battle Tendency) had nearly ended, why am I explaining this? Well every character in the anime that appeared as a character in the game (be it a character or a campaign/menu voice) reprised their voice!
Those voices themselves are perfect and recreated by amazing voices within the anime world.

JoJo here in Japan is one of the most famous mangas to have catchphrases and it is very well done, from Parts 1-8 perfectly capturing the voices and how the catchphrases would audibly appear!

The music was created by the same Cyber Connect 2 musician as the Naruto Ultimate games as well as Asuras Wrath and every character/menus theme fits the game very well! 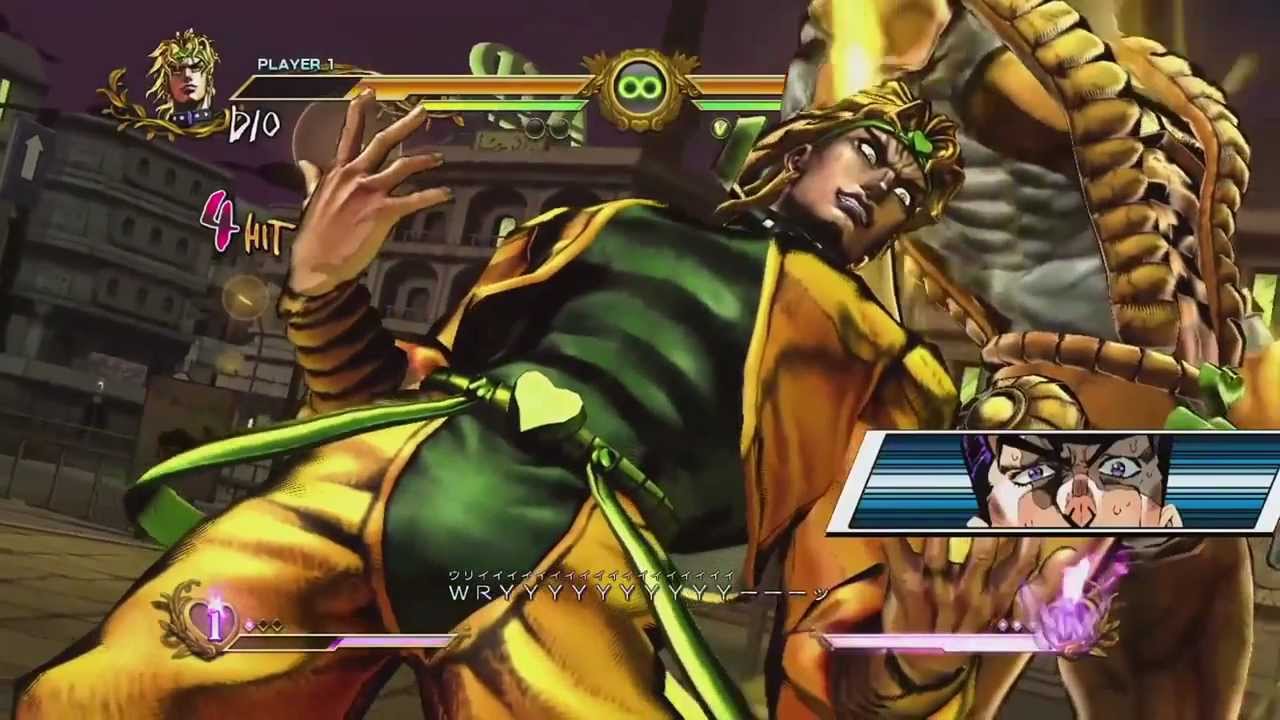 Let`s focus on 2 parts of this, the characters and the stages.

Each stage is very well represented and looks as it does in certain pictures within the manga itself, speaking of looking very well JoJo is known for it`s ジョジョ立ち (JoJo Poses) which are very very very well shown within the game. Even if you cannot see it before and after battle, a lot of poses were recreated in and between attacks as you battle!
Now let`s talk all about the character models…. PERFECT, they represent the characters in an amazing way, why is this? It is because the creator of JoJo, Araki Hirohiko, helped design the graphics for the game (named after Giornos Stand called Gold Experience Requiem). The graphics for the characters are similar to cel-shading and are beautifully represented to be honest!

The characters poses and attacks are beautifully recreated from certain pages of the JoJo manga.

As previously mentioned there are a couple of battles modes, allow me to explain how they are first of all.

We have Campaign mode, a mode in which you can gain more catchphrases/poses/costumes and costume colours for your character in any mode (see controversies for more on this), Story mode which uses text to explain each parts story and adds battles in the manga with unique story only intros to each battle.

Versus is your average 1 VS CPU or 1 VS 2 etc and Online Mode is pretty much obvious lol.

DLC: DLC comes in the form of free campaign episodes (to unlock more costumes/medals etc) and paid characters. Minus one character which was given away for free (see controversy’s) each character costed 600 yen (unless you owned the day 1 Kawajiri Hayato memopad which gave you Kira Yoshikage for free). 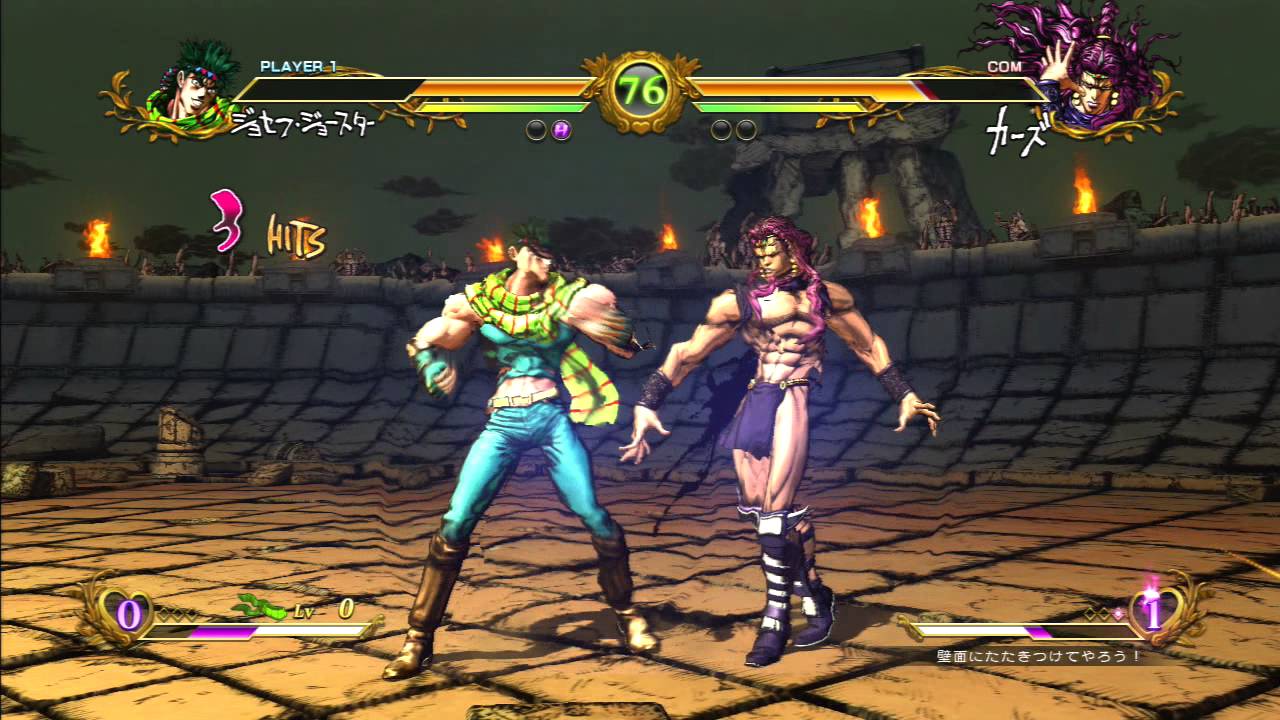 The game itself is amazing (biased aside), it is known here in Japan for only being a game for JoJo fans, which is understandable, but as a fighting game it does a good job in many non JoJo gamers opinion in Japan and overseas for those who have imported the game.

Sound and graphics are perfect and fit what a JoJo game would be.

Many games have controversies but this game had one of the biggest in Japan.

2 controversies came of this:

Number #1: Campaign mode, now campaign mode on paper sounds great, fight random characters ghosts and also boss characters that were created by the developers so you can earn medals which give characters extra costumes/costume colours and catchphrases used in/before and after battles. The controversial part was the fact that you have a bar of health (represented as a battery) and to battle you use one of 10 parts of the battery to fight (if all 10 bars are depleted you have to watch to play that game mode again). So to fight this, Namco/CC2 allowed the player to purchase different support items for the game (you can earn them still but is randomly selected before battle) apart from the Dango (dumplings) which give you more battery (you do earn 1 health sometimes randomly after certain batteries from Part 4`s Antonio commonly and also you do get a complete refill of battery from Pocoloco but that is very very rare. but apart from waiting and these are the only ways to refill you bar quickly for free).

Another controversy is the fact that the developers, CC2, did not create the character models but another company did and it was shown in very small print on the game itself and other media when mentioning this, making CC2 seem like the creators of such models).

Due to the above controversies CC2 and Namco apologised by giving away one of their characters (Part 5`s Panacotta Fuugo) away as free DLC!

In the end regardless of the controversies and showing off what this game indeed does put out I do indeed love this game and play online with friends or couch co-op with other friends with my super customized favourite JoJo characters!

The game comes to the US and Europe this month (although with changed which I have heard a lot of and hate with all my soul) so please let me know here or on my youtube etc if you would like me to show you the ropes or teach you anything JoJo!

Well if this were a score to make JoJo fans (and the JoJo king known as SteelBallJack, aka me) then it would be a full 10/10.

It fits the bill for a perfect JoJo game as it does have a lot of the characters that everyone wants and doesn’t miss out too many of them (Although Steel Ball Run Dio and Weather Report from Stone Ocean would be pretty damn awesome!)

If you are a fighter/anime fighter fan it would be an 8/10 for you, maybe campaign mode would annoy you but other than that its a strong fighter and the netcode is pretty damn strong!

I will continue with some of the games I have completed but before then I hope to see you all back here on the site and if you want to know anything… ANYTHING, related to JoJo, please ask me and I will explain anything about anything!