Welcome all to our new weekly article!

Sorry not sorry about the Tetra picture!

For those of you who may of missed it last week we are going to be putting out this weekly post discussing what we are playing and why, we’d love to hear from you as to what you are playing so please comment in the Discus box down below and start some healthy Otaku fueled debate!. 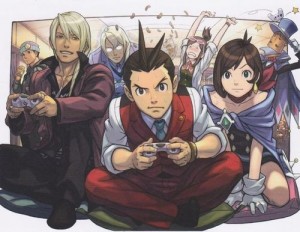 This week I continued on my task of completing The Witcher 3, completed a huge chunk of the story and it really captivated me the way choice I had made some 70 hours before actually started coming to effect, the more I play it the more i’m sure that this is one of my favourite games not only of last year but all time!. Portable time I have been jumping between  Yo Kai Watch & Resident Evil Gaiden, Yo Kai has become my go-to game when I have a few moments spare just befriending & Battling away, keep your eyes on the site for my Import Review of the game coming soon. Resident Evil Gaiden is one I have started for an Otaku Review to release in a few weeks time, as one of the more obscure titles in the franchise history I thought I’d delve into it & write my impressions for the site.

Finally I have just started on Naruto Shippuden: Ultimate Ninja Storm 4 on the Playstation 4, the review copy dropped through the my door the other day and everything else has been held back so I can produce the best review I can for the game for release day! DATTEBAYO!.

This week I’ve made things up with my Dreamcast, so that’s been getting my love and attention, I’ve mostly been playing Toy Commander, which is a game I’ve always loved because it’s challenging, but still manages to keep a fun factor, and Evolution, which is another game I’ve always loved. There have been some others, KoF 2002 (IORI <3), Hellgate (An unreleased game, a friend sent me a link to the leaked beta) and Maken X (for those who don’t know, it’s the original Maken Shao, the only difference between them is X is first person whereas Shao is third person, it’s by Atlus, something about making a Deus Ex Machina with a personality… I honestly have no idea whats going on half of the time) [Ed – It’s K’ or die Liam!]

Well I failed in completing Fallout 4 last week so this is still on my list of games to keep on top of. However though I have started to play Life Is Strange and The Witness this weekend so they should keep me busy this week. Life Is Strange was a title that I loved the look of at launch but just got lost in the pile of games so with the special edition physical release out I thought I would finally give it a go. So far, one episode in and I am really enjoying the story. [Ed – Would love to hear just how Strange life is]

With access to my PC returned I have eagerly started playing Dragons Dogma: Dark Arisen. This is the re-release of the last generation RPG which really was underrated at the time and features all of the DLC as well as graphical and gameplay tweaks. Although it still suffers from some of the minor niggles present in the original such as having to run back and forth between to places on the map many times and the slightly clunky controls its true potential shines through clearly. Offering a couple of unique at the time features such as the ability to hire new party members from an online pool of other players party members but also making it obvious that Capcom pulled from its other big franchise Monster Hunter, with the huge bosses to clamber around on and attempt to hack to pieces which is always fun, exciting and above all difficult. Dragons Dogma: Dark Arisen will certainly be keeping me very busy over the coming weeks.

In portable play time I have only really had time for one absolutely fantastic title and that is Devil Survivor 2: Record Breaker, suggested to me as a must try title by Nameless Andi I went in blind. Needless to say within half an hour I was hooked, DS2 features a whole host of often funny and interesting characters that drive along a dark and disturbing story full of death and demons. Smooth SRPG gameplay which punishes you for stupidity while offering great rewards for well thought out play makes for a very well rounded portable title which will be being pulled out of my pocket at work and on the bus for the foreseeable future [Ed – I’m fairly positive unlike myself you rarely grace the Poverty train known as the bus 😉 good choice though!]

So this week has seen all new games being played! well, thats not entirely true. It’s always like a merry go round when your playing catch up with missed releases though. Surprisingly I’ve been playing a lot of Battlefield 4 this week. I’m hoping EA will take notice of my rapidly increasing game time & finally hear me out on my Battlefield: Upotte!! Idea instead of doing a Battlefield 5 (or another terrible Hard-line) Who doesn’t want moe guns anyway? When not gunning I’m trapping on Deception IV: The Nightmare Princess. To be honest I wasn’t expecting much considering the Vita port esque file size install, but for £13 its surprisingly decent on Ps4. It can be irritating when the AI just skirts around your trap spot, but there’s few things more satisfying than nailing a huge trap combo. Aside from those, Onechanbara Z2 Chaos has carried over from the previous week as I’ve been taking my time and enjoying in short bursts. There’s plenty to unlock still! I’m quite tempted by the banana & strawberry costume DLC for £2.49 as well…. [Ed – I want Battlefield: Persona with 110% more Waifu and Friendship]

This week I’ve received Final Fantasy Explorers a title I’ve been anticipating since it’s announcement in japan and have put a lot of my free time into since receiving it as a final fantasy fan and monster hunter fan it ticks all the boxes for me, as well as this I’ve been continuing my work on Etrian Odyssey Untold 2 for it’s upcoming review as well as covering the ps4 port of Dark Cloud look forward to them both dropping soon. [Ed- Honestly shocked you like Final Fantasy, you’ve never mentioned before…… maybe a review will appear soon for it here]