Us here at Otaku Gamers UK we just love to talk about games & ourselves so we decided that we should have an article in which we can talk about ourselves gaming for your entertainment! Lucky lucky readers!.

I’m sure most of you will be familiar with the concept but we will be discussing what we are playing, why and what we think of it, feel free to comment at the bottom with what you are playing or just interact with any of our writers. 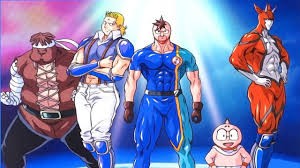 This week I have been playing tonnes of 3DS mainly Yo Kai Watch for my upcoming import review of it, being stuck in Europe means we still don’t have any date for the title so I’m hoping my review will help make some informed decisions about the upcoming multimedia Behemoth. Also just started doing the Survivor difficulty on Zombi for PS4 which I will be streaming on my Twitch channel http://www.twitch.tv/aigato/ . Finally when I have console time I’m still trying to finish off The Witcher 3 which was my personal GOTY, once I have that finished off I can then try to work through the Heart Of Stone downloadable expansion before Blood & Wine drops.

I have been powering through Fallout 4 with the aim to finish it by the end of the month.  I feel I am getting closer but thee is so much to see and do in the Commonwealth!  As well as trying to clear my backlog this year I have started to dedicate a single day a week to play some local co-op games with my Wife.  This weeks pick (and more likely the rest of this month) is Lego Batman 3 – it is an easy game to pick up and I must say I am having a lot of fun with it.  That is pretty much it for me this week.  Hopefully this time next week I can say I have finished Fallout 4 and moved on but that is hoping that I do not get to distracted

Last week I jumped back on the Ps4 train, and considering I had ordered in Onechanbara Z II Chaos the prior week, I was looking forward to catching up. Onechanbara hasn’t disappointed. Pummeling zombies as Saki is as glorious as anticipated. The gameplay is much more slick this time around, the 360 release feels extremely wooden in comparison, and even the somewhat underwhelming graphics don’t take the sheen off things (character models look great though of course) I’ve been breaking up the zombie slaying with another game I got with the Ps4, Bladestorm: Nightmare. The original was pretty much a hidden gem on Ps3 and I was looking forward to trying the new Nightmare campaign.I still haven’t started it yet though as I’m enjoying the original campaign again. Not had much time for anything else due to work, but I have been getting the odd cheeky battle in on Moemon when possible. Moemon is a Pokemon Fire Red mod that replaces all the pokemon with moe girls styled on the pokemon they replace. It’s all about the moe afterall….. [I’m guessing not Moe from the Simpsons – Ed]

With this week drawing to a end I’ve found myself with little time for gaming however have been enjoying playing Etrian Odyssey 2 untold mainly to cover it for a review were running but its providing a welcome pick up and play when i have some free time. Other than this i have also managed to squeeze in a few good hours of Fire Emblem Awakening that i am finding quite interesting considering the last one i managed to play was on the game boy advance was a good title i am glad i have given it a chance. Finally i have also been toying around with the Legend of Legacy demo due to my interest in the upcoming title. [Maybe the lack of time is due to having 2 huge games on the go at once 😉 – Ed]

This week I have only really had the opportunity to play on my 3DS, but happily have been able to play a number of titles which had passed me by from the time my 3DS was getting very little love. In the last few days I have been mostly splitting my time between Kirby: Triple Deluxe and Puzzle & Dragons Z + Super Mario Bros. Edition. Kirby: Triple Deluxe is the latest handheld platforming adventure of the adorable pink blob, travelling through a simple but beautiful world in 2.5D meaning that you are able to move between the background and foreground in certain sections which looks fantastic with the 3D slider on. Throw in a whole bunch of great new transformations for Kirby across 35 levels and its another enjoyable outing.

Puzzle & Dragons Z + Super Mario Bros. Edition is slightly different though, being a puzzle game similar to Bejewelled but with RPG elements. Each battle you fight with your Mario themed team is played out by matching tiles to make units attack or heal. Although far from the strongest puzzler and it’s RPG level up system is hardly the most complex as a complete package it is a fantastic title for short plays on the go.

Overall even though I have been separated from my PC and consoles my week has still been great fun gaming wise. [Gotta get dat dere’ kirbeh – Ed]

This week I’ve been playing Splatterhouse (2010) & Majora’s Mask 3D. Majora because I felt like revisiting a classic and seeing if they had made any changes. Splatterhouse because ripping dead things arms off and beating other dead things to their second death while a wisecracking mask (voiced by the same guy who does the voices for Tigger & Pooh!) cracks wise is something needed to help me through this stressful week!. [Sounds quite dark – Ed]