Sword Art Online: The Lost Song is the latest title in the SAO franchise to release here in europe and our first physical official game release. Releasing on the Playstation 4 and Playstation Vita. We reviewed the release based on it’s Asian release which featured english subtitles. Below the review are my notes based on my time with the PAL Playstation 4 version. 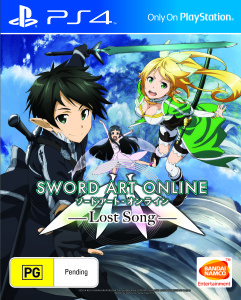 Review copy supplied by Bandai Namco
The 3rd title in the Sword Art Online series of games following Infinity Moment and Hollow Fragment, this time it is set in the game Alfheim Online (ALO) and remains non canon much like the rest of the series, existing as a alternative version of the story but remaining in the same time-line as the other games and anime.
SAOLS is set on a original story from the Anime in a expansion of the ALO game called “Svart Alfheim” and sees the players logging on as soon as the expansion goes live to explore the new floating islands as they intend to be the first to clear this new area, Along the way your party will expand and you will make friends and form rivalries. Rivals such as guild Shamrock who seem to be on equal footing with Kirito and friends if not forging ahead for the majority of your game forcing your group to play catch up, your next adventure awaits!

Some of the major changes over the previous titles include the ability to fly , character creation, a huge level cap settling out at level 1000 and also a larger party. 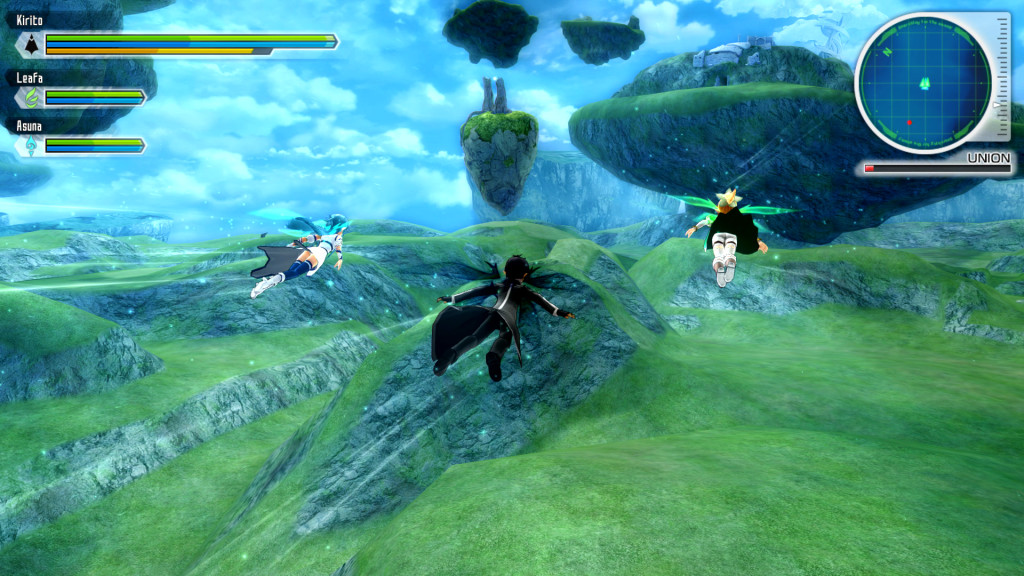 Flight – As the game is set in ALO the characters now have the ability to fly which is clearly useful for exploring the floating islands and reaching locations that you would be otherwise unable to access, the flight mechanic also stretches into aerial combat and evasion,. While I have had little experience with flight in games this came very easily with only a few issues at first, however I personally put this down to my own inexperience as after about 20 minutes I was gliding across the map with ease gathering items and taking out foes. Even new players such as my self should quickly get to grips with this interesting gameplay mechanic.
Character creation – for the first time you can create your own character and play as them instead of Kirito though it makes no difference to story progression where you are still treated as if you are Kirito. As refreshing as it is to have this character creation system the options are actually very limited, something I expect to see resolved through future DLC release of new outfits, customisation options etc much like there was in Hollow Fragment.
Larger party – This time round you have a party of 3 unlike the previous titles where you could only have one team-mate at a time unless you entered multi-player where you could have three, While this makes levelling individual members easier. The biggest bonus to this is you can fill set roles in your party, for example Kirito is my main dealing DPS while i have my archer backing me up and a dedicated medic, making mobs easier to deal with and making combat even more customized to each players style. 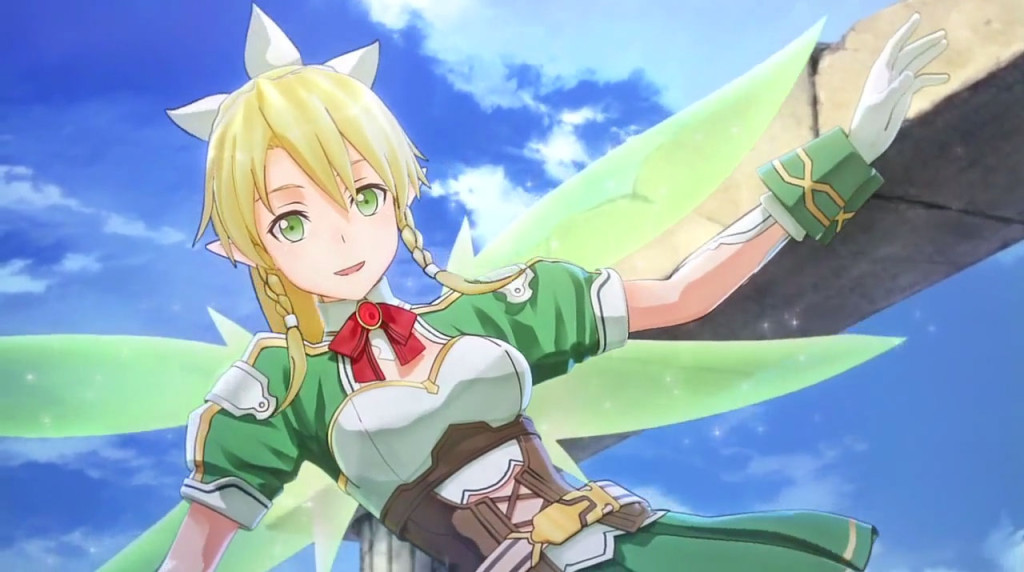 As for the way the story is told SAOLS default’s to the norm with the series and many other JRPGS, the story is told via 2D character portrait’s and text, As stated this is the version imported from Asia and does contain voice acting thought this is not in English and I am unsure if the EU release will contain English voice acting but in this version all subtitles are in English. And I have to say after playing Hollow Fragment and seeing how horrific the translation was in places, Lost Song was a breath of fresh air as the translation is much better, making the story easy to follow and enjoyable rather than dealing with seemingly random words been thrown together in places.

In itself the story is quite simple, you are Kirito the Black Swordsman, one of the survivor’s of the SAO incident and accidental harem collector. After recovering from the SAO incident he returns to his normal life, deciding to join a new game with his friends and after enjoying it learns of a new expansion and vow that he and his friends would be the first to clear it. Along the way he discovers that Dr Rainbow a young scientist and idol renown around the world for her work with VRMMO and her music career, performs live shows inside ALO and goes to investigate.
Being based,all be it rather loosely on an Anime most would assume the game would used a animated art style right, and they would be correct, although slightly the character designs are somewhat reminiscent of their Anime counterparts making this game quite pleasant to look at both in the 2d animated story telling and the 3d game play. However there are some issues to be noted in the form of stuttering, for the most part the game runs smoothly though on a few occasions there is a noticeable lag, It is usually when in battle and only for a split second but its clearly there. This is something that I am hoping will be patched or handled a lot better when played on the PS4 when later this year.
However my more major gripe comes in the form of the game locking up, while the start and end of the game this seemed to improve, during the bulk of the game at least half a dozen times it locked up, usually during flight,. While this annoying at the best of times when the game starts up it states it has a auto save feature but during these locks it seemed to lose a lot of progress putting me back up to 5 hours to my last manual save at this point I came to the conclusion that you could in fact only manually save in the inn/your room.

On to the audio now and though the voice acting is not English the fact it’s there is quite a pleasant little addition to the already well done sound track that accompanies the title. The sound track seems to go well with the landscapes and flight has the addition of hearing the wind change as you move at varying speed and change your direction.
The battle system is tweaked this time round to using square for light attacks and triangle for heavy attacks a simple enough system and easy to chain the two together, while holding right bumper allows you to use your battle skills, tapping it sheaths your weapon and holding the bumper with weapons sheathed will allow you to use magic that range from offensive elemental spells to healing. All in all it is quite a easy to use system and allows for fast paced battle both on the land or in the air. 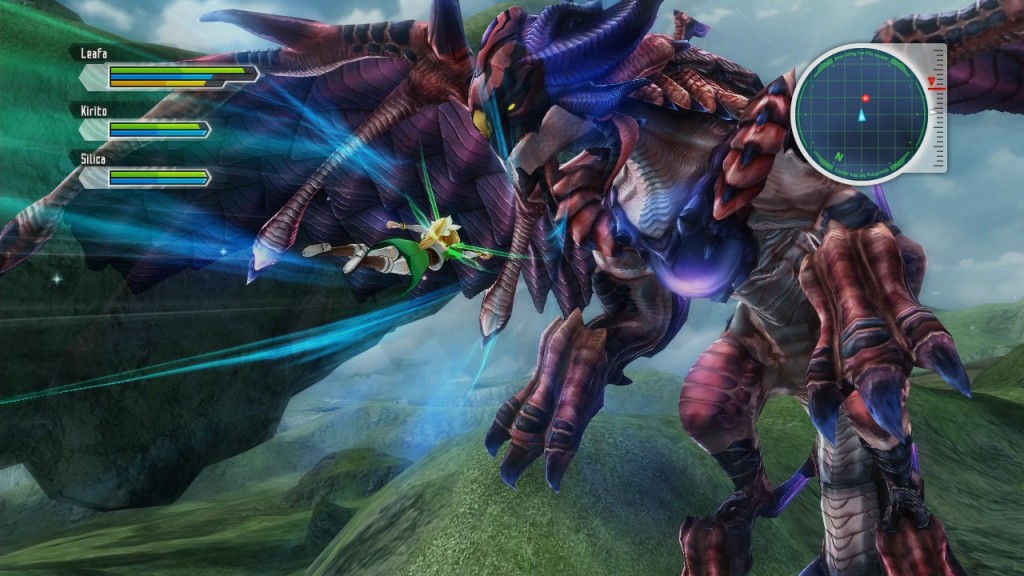