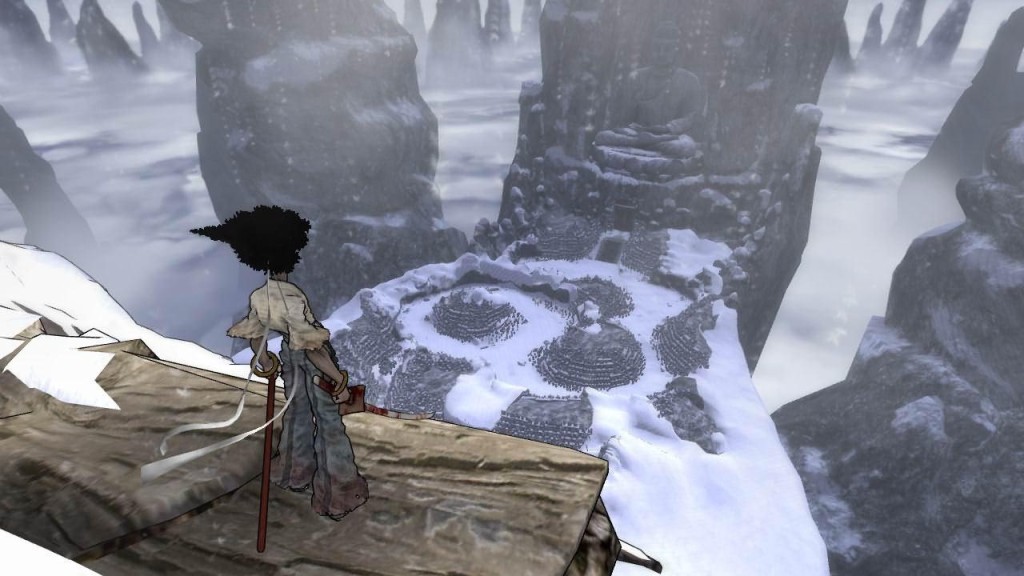 Afro Samurai 2: Revenge of Kuma is available on Steam & Playstation 4 now, with an XBox One Release soon.

Afro Samurai 2: Revenge of Kuma pt.1 stars Kuma, childhood friend of Afro turned deadly rival, “Killed” on Mt Shumi in the first game this game starts off post death. Kuma is woken by the ghost of his dead adoptive sister which spurs him on to collect his various data chips (apparently this was the sum total of damage taken in 1) & chase after the series protagonist Afro. The first major story section deals with Kuma or as he’s known then Jiro as a child when Afro causes their peaceful life to be destroyed, friends and masters wiped out and the start of the series.

This unfortunately is done in the most painfully boring way, it retraces old steps which any fan will already know and lacks the presentation or writing to inform any newcomers. From then it just flounders, you jump from flash back to dream sequence to hallucination with little indication of what exactly is going on, one particular bit involves Kuma sat on a throne hearing an important speech from Afro Samurai 1, only he wasn’t “alive” to hear it and it wasn’t aimed about him.

The visuals and effects make the cutscenes all the more confusing but are saved by some nice comic book still frames every now and again, the narrative ping pongs from horrid to shite for about an hour and half of the roughly 2 hour, from then it starts to pick up before you smack into the painfully abrupt cliffhanger ending and left wondering just what went on!.  I will say Redacted did strike a good chord by having Brother 3 of the Empty Seven become the “Ninja Ninja” of the game (Mouthy Sidekick), the new antagonist seems interesting and the end revelations about Justice are all interesting for more well versed fans but people new the series it’ll just come off as badly written babble. 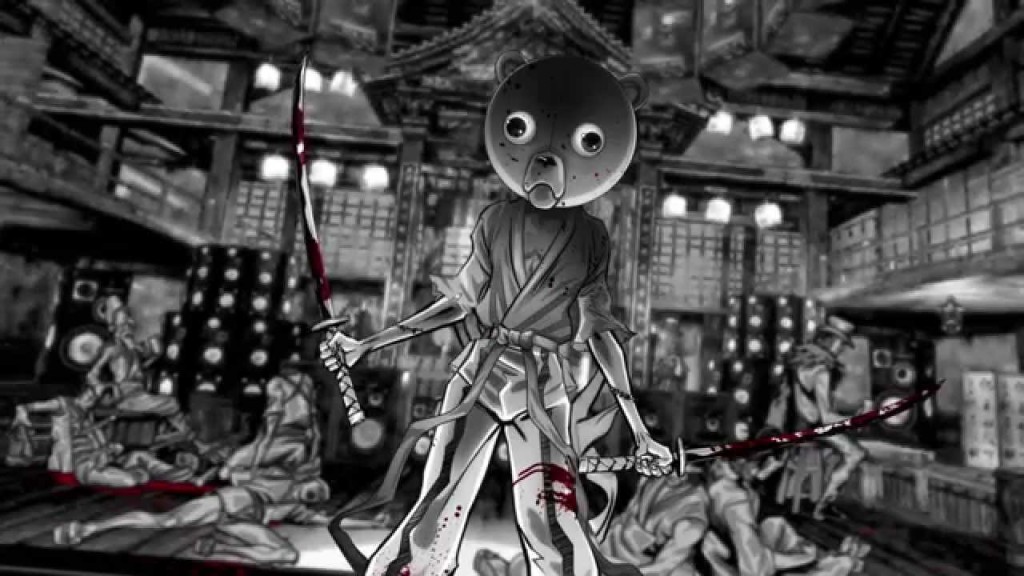 The sound effects in this title are once again such a strange mix of ear drum ruining crap and impressive musical scores. With the music you get the same feel as you did with Afro 1 and the series which is to be expected with the RZA once again heading up the score, you can quote me on this saying that hands down THIS IS THE BEST THING ABOUT THIS “GAME”. I’m not too huge on most Rap music but I do have a soft spot for Wu Tang and most stuff the RZA has put out mainly Gravekillaz so your love of rap music may change how you feel about it but for myself I felt it kept the atmosphere of the first even if you had to close your eyes to get it. The voice acting is trash for the most part, Yuri Lowenthal phones in his role as Kuma, the voice actor for Brother 3 delivers some quality lines and what I could hear from Gunman Jones he didn’t seem too bad, unfortunately this is all destroyed by an up and down audio mix meaning some characters broke your ear phones where as others were just too quiet to hear and reusing audio from Afro Samurai 1 badly (The Justice Speech! urgh!).

The visuals for the title are mostly the same from the PS3/360 title, the frame rate and animations really are not. I don’t remember the game at any point running smoothly and certainly nowhere near 60 FPS, the animation is poorly done and is in fact worse than last gen with some pop up story books having more animations!.

Visual effects are utter rubbish aswell with Slo-Mo being overused, this really damages the game as it already looks utter shite the slo-mo and makes it seem like the game is just lagging behind. Explosions and colours are washed out and nothing really connects right, Kuma kinda floats, attacks have no impact and often the level is intact tweeking out at points. The level variation is nice from Mt Shumi to deep in a feudal city, in typical Afro fashion it’s a feudal style dripping in hip hop and futuristic nods and would be something to gush over if the game wasn’t chugging along, hurting your eyes or abusing your ear drums at the time. 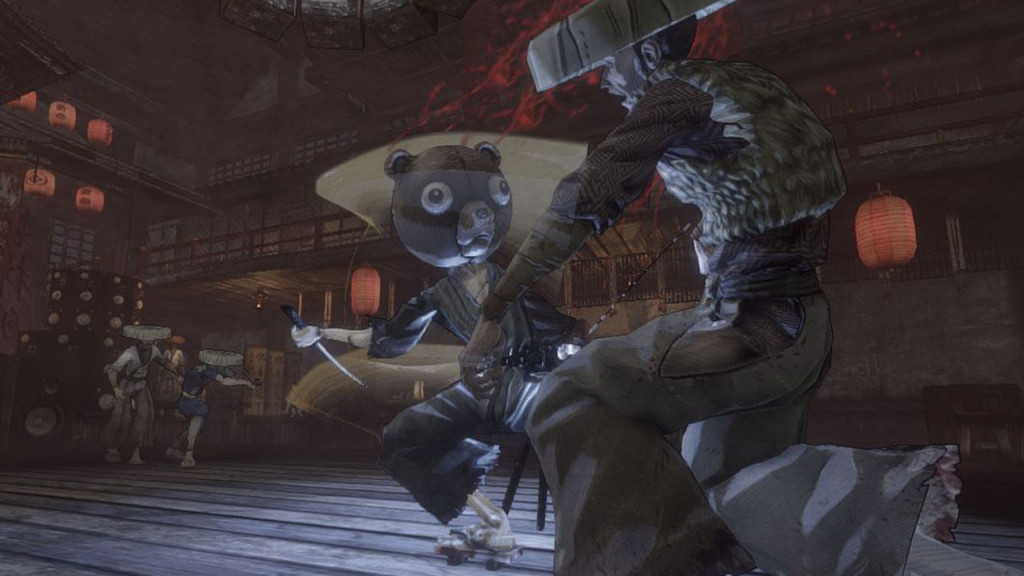 Afro Samurai 2 is a 3D Action game much like the original, Devil May Cry or Metal Gear Rising, in fact the original had a similar gimmick to MGR where Afro could focus his cuts which helped make the game feel fresh and made you feel like a samurai bad ass. Afro Samurai 2 doesn’t have this feature, it has 3 combat styles consisting of mind numbing button mashing, poor parrying, one can rage causing insta kills, one can jump in slo-mo(yay) & one has an area insta kill move. To make matters worse some enemies only die when a move from a specific style is used I.E Rage from Kuma style which I still have no idea how it worked, the combat is unresponsive and looks shite it’s just plain bad especially compared to the original.

To make matters worse the only thing close to being a boss fight in the game is riddled with QTE and button mashing to the point you lose interest or your hand cramps up, another thing to point out is the games insistence on having Kuma crawling in some story sections, it’s drab, does nothing and pisses you off really it’s that poor.

The majority of Afro Samurai 2 is a poor shell of what used to be an underrated gem, it’s undercooked, mind numbingly bad and offensive to its hardcore fan base. Towards the end quarter of the game it offers some light to what could be greater things but it mainly just falls flat. This is part 1 of a 3 part series and I’m hoping Redacted take all the feedback from this part and fix 2 and 3 to help regain some momentum for Afro as the story could really go places. Unfortunately as it stands I cannot recommend anyone even bother to try Afro Samurai 2 as nothing about it is worth your time or money.