Another year another WWE title from the team at 2K, promising some big moves this year we are going to look at what the product of Titan Towers has to offer and if it’s enough to sway fans from another wrestling title that released the other month. Will this be as good as a go home show of RAW or just a cheap episode of Metal? Read on to find out!. 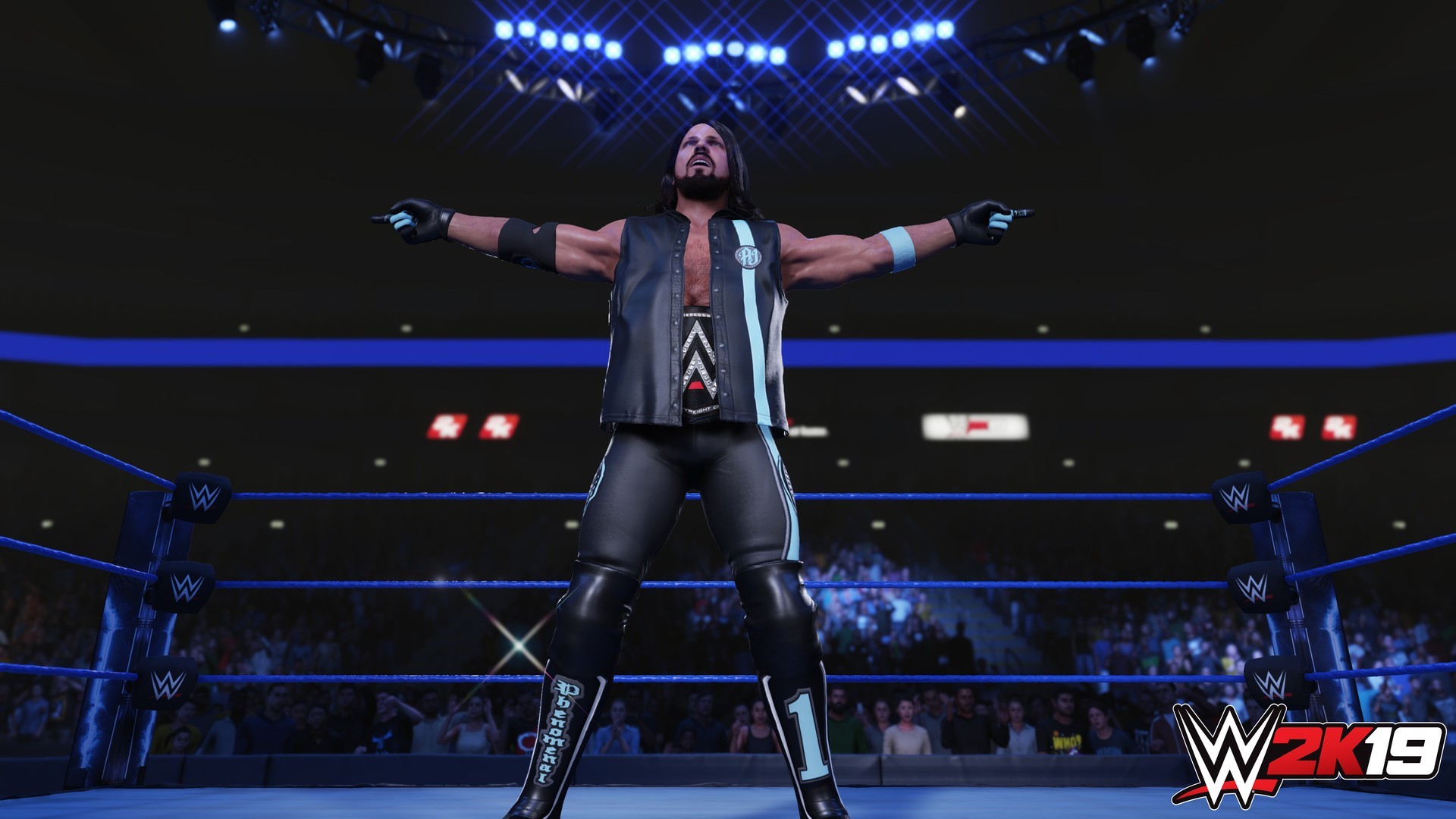 So this year WWE 2K19 has the goal of fixing everything that was broke in 2K18 while keeping the stuff that actually worked in the game, rather than reduce the mode count 2K19 has done their upmost to give everyone a little something to keep them in the square circle long enough to want to slap some money down on a loot pack…….more on that later!.

This year’s product features the fan favourite Daniel Bryan and the story of his career in the returning “Showcase Mode”, this follows Daniel Bryan from his humble first match against an early John Cena, all the way to his Wrestlemania title win over the dastardly Triple H!. This is done by show casing some of Daniel’s most memorable matches, opened with a brief introduction from the man himself and a set of objectives to trigger throughout the match to replicate some of the best spots.

For the most part this is a fantastic experience for fans of Daniel Bryan or people wondering just what the hype around the “Yes Man” is, some of the objectives can be quite annoying to trigger and even on the Normal difficulty it doesn’t start you off slowly, you’ll need to know your way around the ring if you want to unlock the various Daniel Bryan’s and John Cena’s throughout the mode. 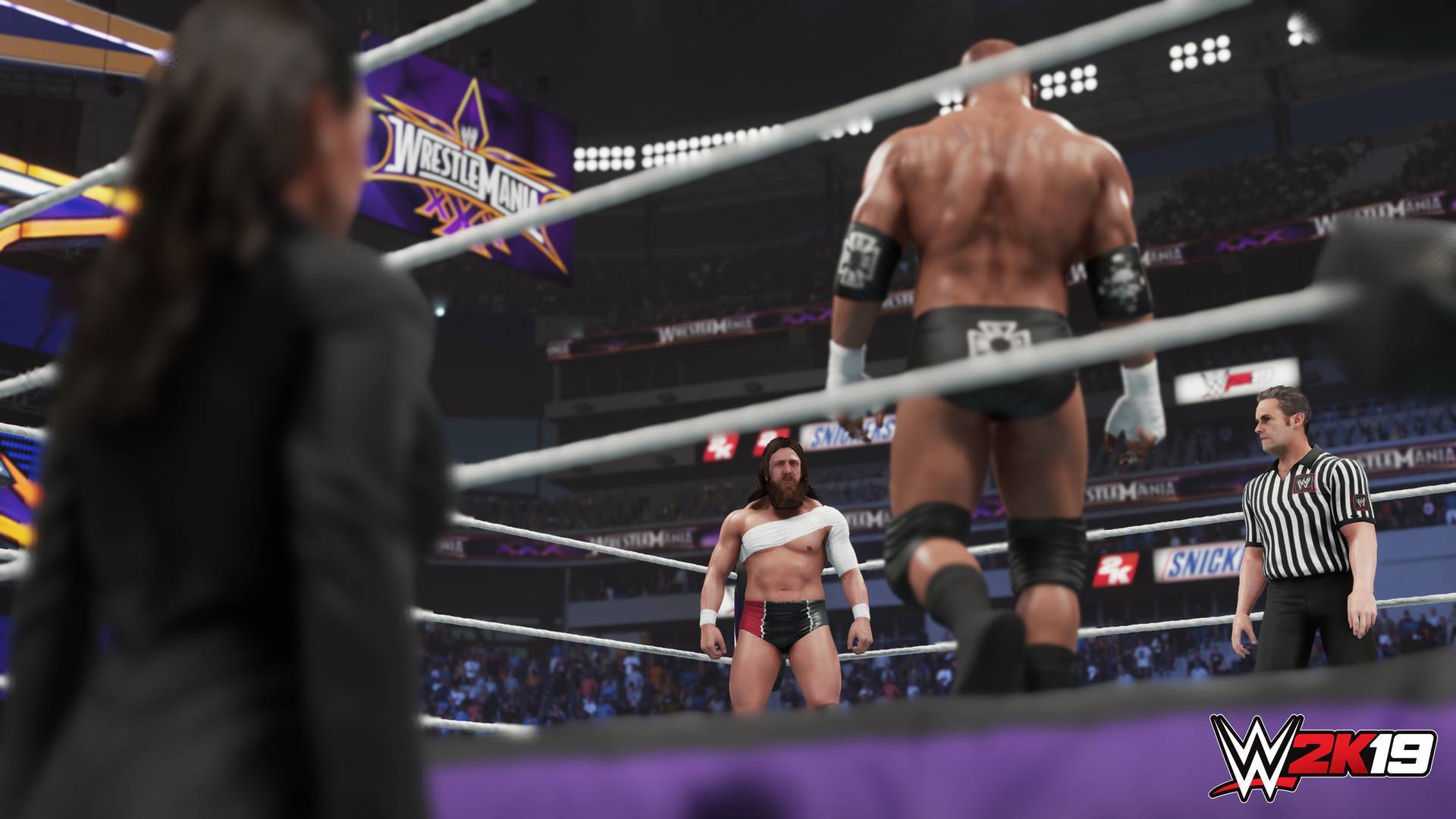 If Showcase Mode isn’t your shtick then you have the MyCareer, this is a mode that I was initially very excited for when 2K15 came out and it really let me down, the same with 2K16, I never bothered with the following two titles so I was curious to see what changes had been made to this mode in my absence.

The major change with this mode now is that it’s a linear and cinematic experience, rather than letting you build your own career you take your character through a predetermined tale of corrupt Triple H, Indie Dreams and many one sided matches you’re expected to win. The pacing for the most part is fine but I feel skipping over NXT may have rushed it somewhat and it would of been better in my opinion if we could have avoided the “Triple H is evil” gimmick which many of the WWE games has used. Massive props to the returning Barron Blade and “Black Hole Cole” is possibly my personal favourite fictional wrestler of all time.

In between matches you can listen to Podcasts, read texts, customize your wrestler, talk to other wrestlers and level up your skills. This section usually allows you to take on “Side Matches” which are good for netting you extra EXP and dosh for packs, it tries to show the backstage world of wrestling but doesn’t stray too far from kayfabe and kind of comes off a little goofy.

The difficulty in MyCareer is quite high due to having to build your stats, for some reason the game is more than happy to throw you to the main roster with full Reversal bars and who hit like a truck while you are still piddling around the mid 40 mark in stats, alot of the matches take cheap tactics and exploits to get through and expect to restart alot of them, one quite early on has you fighting 3 Tag Teams back to back without your health going back up, lovely.

So if you’re more of a General Manager and want to tinker with your own wrestling universe then 2k have the hook up for you with Universe Mode, many tweaks since the last edition leaves it with the most customizable and fun version of Universe Mode yet, mid match cash in’s are a fantastic and much needed addition as is the ability to set wrestler A.I to face or heel allowing you to further customize the ins and outs of your WWE Universe.

One of my personal favourite additions this year is a little more pick up and play than the previous two, Towers Mode!. If you have ever played Mortal Kombat or Injustice you’ll have a good idea of what this is about, you pick a Tower usually themed off a PPV or all the Giant Wrestlers for example and fight them back to back with various stipulations like x2 Speed or No finishers, it’s quick and easy fun, gives you some fantastic unlocks and is a brilliant nod to some of the more arcade origins of the WWE/F series.

As always you have the fantastic Create A Wrestler mode which is really detailed and allows you to create any fictional character or wrestler than hasn’t made the cut for one reason or another, even if you don’t have a creative flair you can go online and look through other players CAW and download them to your system, it’s a fantastic way of letting you truly customize your roster and game. You can also edit any wrestler on the roster, create your own Arenas and belts, it’s a creationists dream and still more than capable of stealing your time.

The online matches are back and from my experience quite functional, I did get hit with a little bit of lag but for the most part it worked really well. You can build an online career by playing ranked matches, taking part in online PPVS and this unlocks special equipment for wrestlers which can only be earned here. I honestly didn’t play too much of the online service as I always feel the best way to play these games is good ol’ couch multiplayer.

WWE 2K19 also boasts and amazing amount of match types here, it’s honestly quite mind blowing when you see just how many matches you can take part in, 2K have also managed to up the player count for some really crazy matches, it’s easily one of the most rich experiences for wanting to take part in a particular match type. It should be noted that not all the new match types are available online, especially with the higher player count, it’s a shame but I can imagine it’d be a huge strain on the online servers. 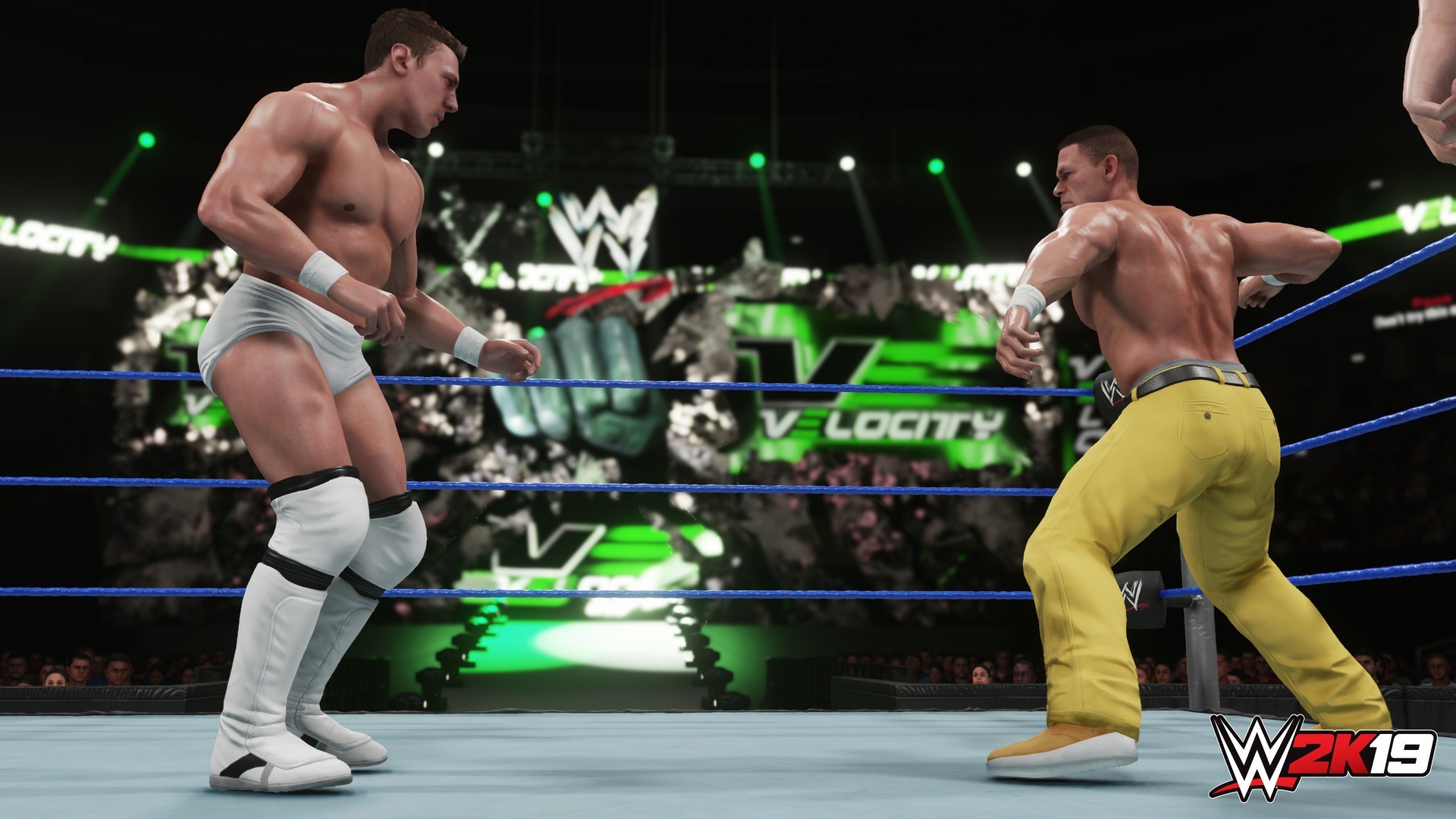 The in-ring action has never been tighter, the wrestlers interact with the ring and each other in the most natural way seen in video games to date, taunt by a turnbuckle and they will lean against it, strike a wrestler standing up and your wrestler will actually connect rather than just striking thin air, the animation here is top notch, when it doesn’t glitch out!. There is a new PayBack feature which allows you to gain an extra edge and help you turn the tide of the match, take enough damage and you can trigger an instant “Finisher” to even the odds, this is just one example as the system is quite in-depth but it’s a very welcome addition. Finally Taunts this year actually acts as Buffs and Debuffs, you can taunt and increase stamina build quicker or build your finisher meter, another taunt will affect your opponent meaning they won’t build as quick, another taunt can make a downed wrestler stand up allowing you to hit more high risk moves from the top turnbuckle.

Overall I was really impressed with the package of WWE 2K19, it’s been a few years since I properly played a WWE game and just as long since I followed the programme, the game has an absolutely huge roster initially and grows even bigger if you visit the in game store and purchase the many many wrestling legends available, chances are if you have ever been a WWE fan there will be a wrestler here for you but really do you need anyone other than The Macho Man Randy Savage? really?.

So as good as the core content of the game is, I do have a massive issue here and it isn’t the various glitches that happen with the animations, it’s the microtransactions. I have honestly been really torn with this subject, I really enjoy playing the game but alot of it feels held back for the reason of opening “Loot Packs”, CAW clothes, taunts, moves, upgrades are all locked behind in game digital currency, the game offers you chances to pay real money to quickly upgrade your CAW in MyCareer, the wrestlers to unlock can also be purchased quicker and grinding the in game money can take quite a while. There is alot of content here to keep any fan happy and it feels like a massive shame that 2K have decided to loot the heart and soul out of the game under the guise of “You can still unlock everything if you play the game enough”, rather than locking stuff behind loot packs why not just have it unlock naturally? with the constantly updating Tower mode my game time is already much higher than usual with this title. 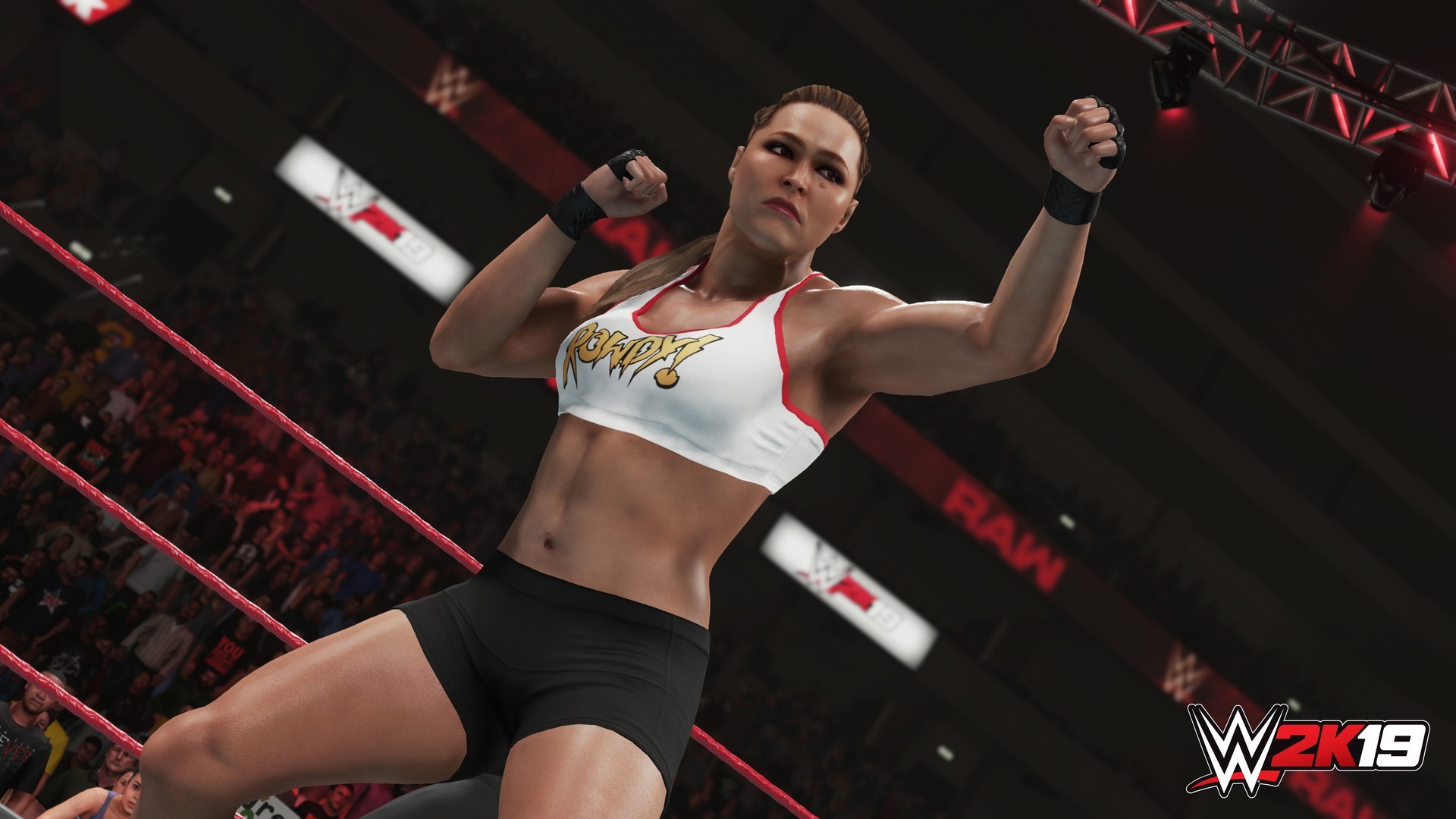 WWE 2K19 is a fantastic wrestling game and one I’m personally glad I got the chance to play, it’s addictive pick up and play with enough depth to make it one to work on, the creation suite is getting stronger and the amount of single player content is brilliant to see, if it wasn’t so glitchy with it’s animations and wasn’t tied down with Microtransactions I feel it would of been a much stronger game, as it stands it’s currently hitting that glass ceiling in the mid-tier