Mighty no 9 was supposed to be the second coming of the Blue Bomber, we all know how that turned out!. In a twist of fate Rock is back and he’s ready to remind everyone why he is Mega Man!.

Mega man 11 follows the original Mega man series in aesthetics & tone rather than the more “modern” X series. The nefarious Dr Wily is back and this time he’s resurrected an old project where 2 gears can either speed up or power up it’s users.

Naturally Dr Wily can’t help bragging about this and Rock with the help of Dr Light, Roll, Auto and Rush sets off to defeat Wily’s 8 Robot Masters and thwart his Gear based plans once and for all!.

The story is Mega man 11 is deeper than what came before but it’s still about as shallow as the shower. It’s told in colourful cutscenes with fun and thankfully not Mega man 8 quality voice acting!. 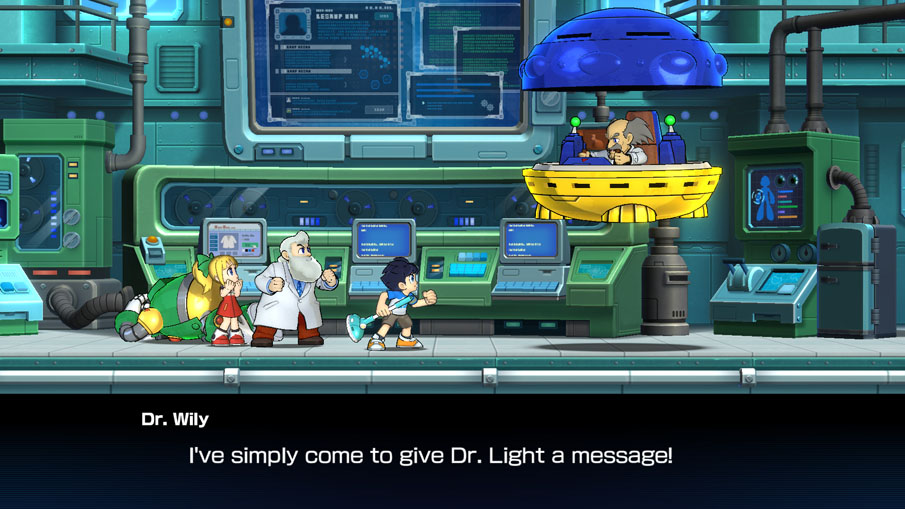 Graphically Mega man 11 is an utter delight, the stages are all varied and follow different themes and the character animations are top notch, Rock especially is very expressive in his animations and gives the game it’s “Saturday Morning Cartoon” look. The enemies are mix between new designs and the classics such as Sniper Joe and Met, the Robot Masters also have the distinctive look of vintage Mega man goodness. The art style here has been nailed to look and feel like you’re playing classic Mega with a new lick of paint

As previously mentioned the voice acting is far less cringy than that of ‘ol Rock’s past and beyond the strange scream he lets off at death everything here is perfectly fine. Now if you’re familiar with the Mega man series you’ll know they boast some of the best soundtracks around, Mega man 11 is no exception. Though no song really matches the level of Mega man 2 or 3 there are still enough toe tappers here to keep newcomers and longtimers happy enough through the game and keep them stuck in your noggin for nights to follow. 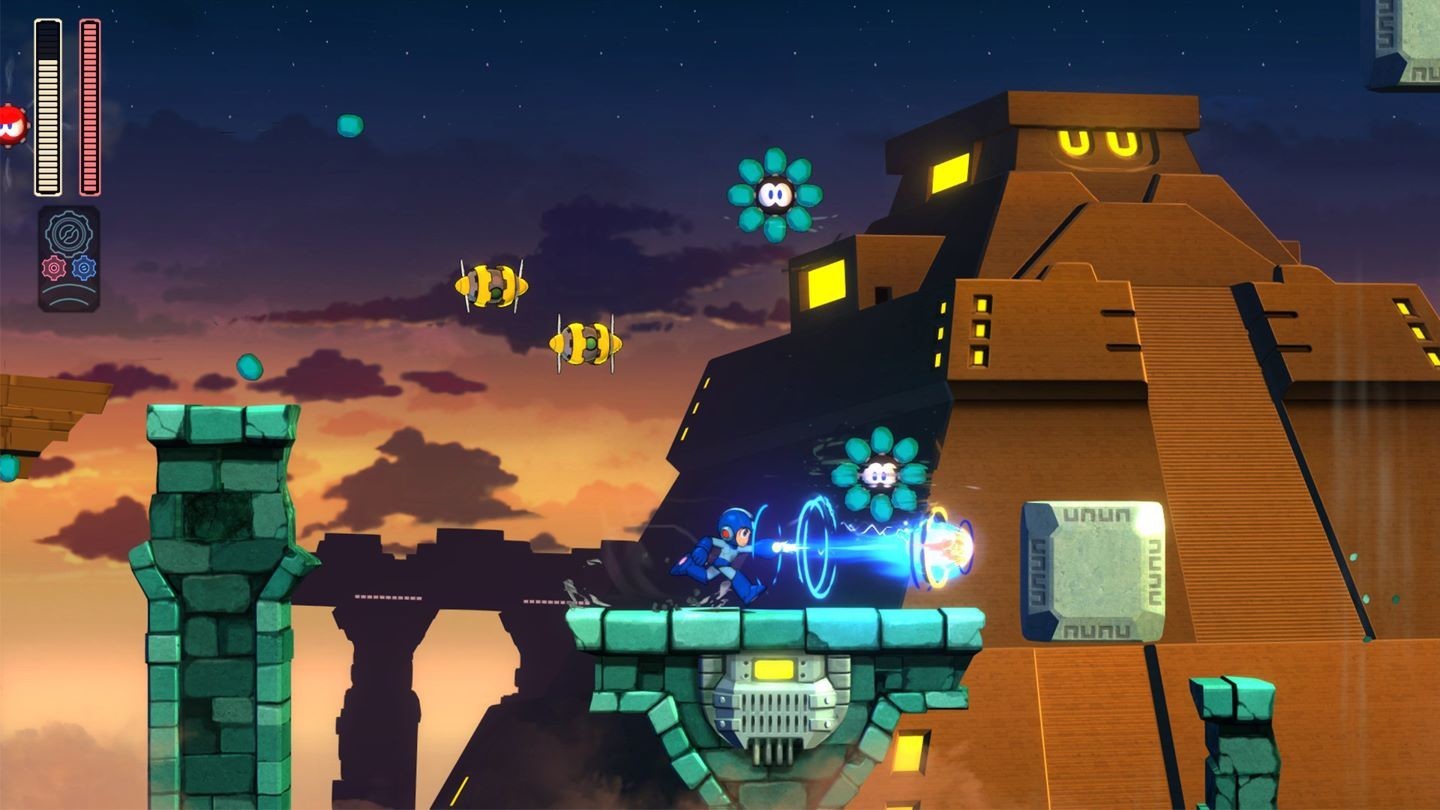 So it looks and sounds like classic Mega man but how does it play? Well it plays just like the greats, for better and worse. Mega man 11 doesn’t do anything to shake up the formula here, 8 stages with the Robot Masters followed by an assault on Wily’s Castle, Yellow Devil and Boss Rush stage included.

If somehow you’ve managed to miss Mega man completely the general gameplay goes as such, you enter a stage, fight and platform your way to a mini boss, defeat that, continue jumping and fighting until you reach the Robot Master, defeat them and receive a power from them, enter another stage, do the same & use your new found power to take the Robot Master down. You can pick the stage order so it offers a level of freedom and it’s always fun on your first run to try and figure out which power works best against which master.

The game controls beautifully, Rock has never felt so responsive and adding quick buttons to switch to the powers and active his handy canine Rush was a stroke of genius and helps keep the pace of the game. It’s faster and more responsive than Mega man has ever felt and doesn’t have the floaty feeling of the later X installments. Controlwise Mega man has reached new heights here and makes the game an utter joy to play. 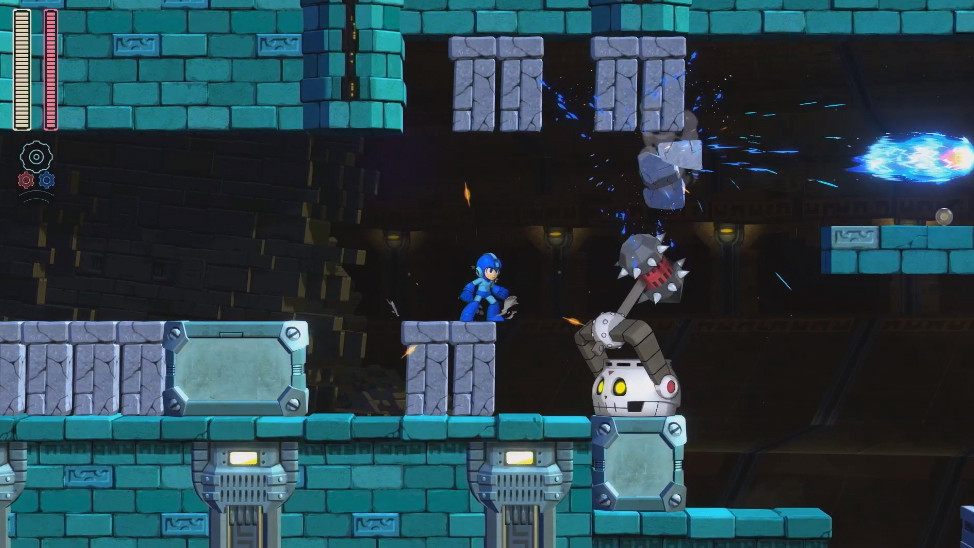 The new gear system also adds an extra touch, one gear allows you to hit much harder helping you deal big damage to the robot masters or pesky enemies blocking your path. The other gear allows you to slow down time meaning you can dodge bullets or spikes with ease and keep those lives intact. If you hit low health you can activate both Gears giving you speed and power in a last stand effort.

Mega man 11 also features quite the selection of difficulty modes with the aim of accommodating newcomers and veterans alike. Between these and the Gear system I feel they more than managed to make the game accessible to everyone, despite the usual Mega man annoyances such as insta death spikes, enemies near pits, stuff jumping up mid jump and disappearing platform sections!. 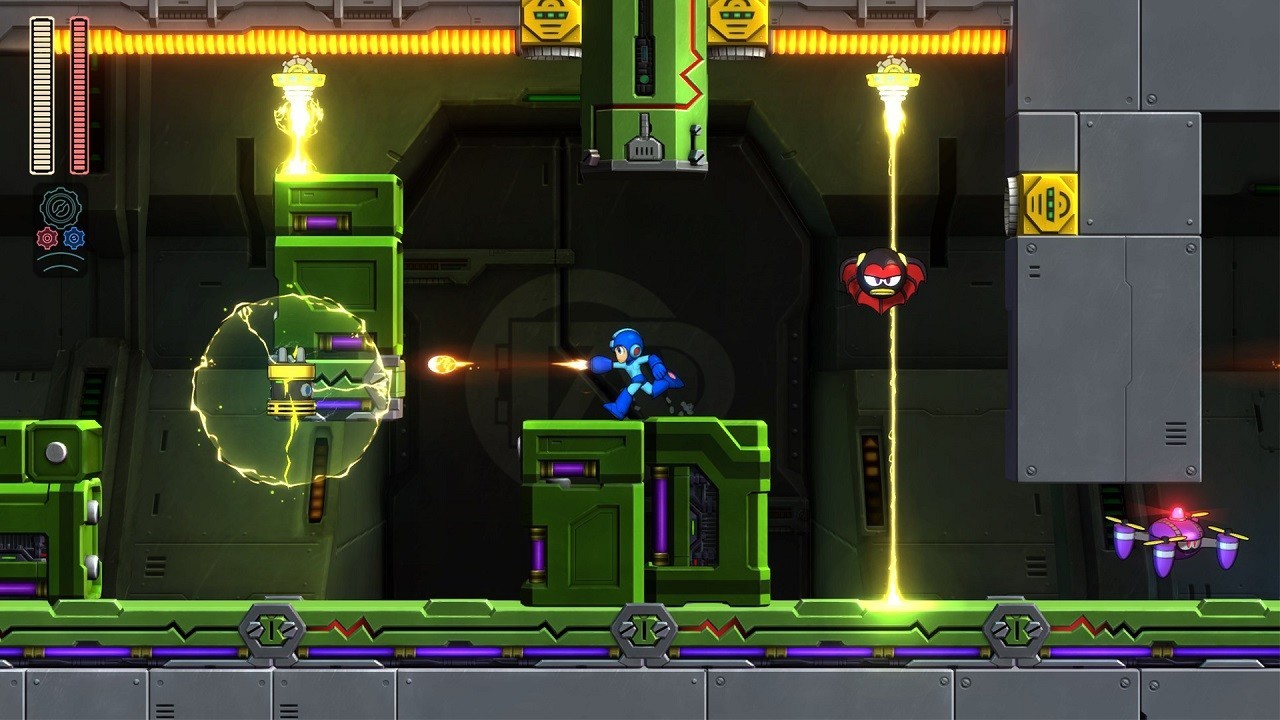 Finally the game also has a store in which you can buy items and upgrades using screws you find throughout the level or drop from enemies, using this wisely can make the game much easier or make it more of a hardcore challenge for the more masochistic of you out there.

The main game lasts around 5-7 hours on your first run, unless you’re quite well versed in Mega man in which it’s closer to the 2-3 hour mark like my first run. There is also a challenge mode for you to compete in too which adds alot of replayability so you can easily lose quite a bit of time to this package if you’re willing to do more than the main story.

It’s very hard to find anything negative about Mega man 11, fans wanted him back and he’s come back in a big way, everything works and only one stage is a bit of duffer (Bounce Man!!!!). The only real issue here is that it doesn’t really do anything new for the series outside of the controls. Everything is just as it has been for the last 10 Mega man games and in this case it’s more than fine. You’ve seen his legacy and now it’s time to add to the legend, if you’re a fan of Mega man or platformers you’ll be hard pressed to find a better title than this in a long time. Mega man is back!.