Chuusotsu! 1st Graduation: Time After Time takes place in a world liberated via a revolution and now finds itself under the control of a Global Peoples Federation. One of the first changes to society enacted by this new utopian government was to introduce the P3 law, an initiative that ranks citizens and issues them with authorization seals. You receive an authorization seal upon completing an evaluation exam during school, and your subsequent result goes some way into herding a person into their intended role/job within this new society. If by some chance you lose your seal or fail to receive one, you’ll become a Chuusotsu. Chuusotsu are at the bottom rung of society’s ladder, lacking the boost & prestige offered by a seal, and are looked down upon by everyone else.

With that in mind, the story opens with our protagonist Arue stepping off the train in the big city. Leaving here family behind, Arue applied to take part in a Government relief programme away from home in the hope that it could lead to a potential resit of her evaluation exam and she could get that government job she craves. Her time on the programme will be spent with two room mates, Hachisuka Koiro & Fujisaki Arara, who she stumbles across unawares during her journey to the apartment bloc – there’s also an encounter with her neighbour Kokoro. It’s not until Arue arrives at the apartment that what the programme entails, and who she will take part in it with, becomes clear. Once all the girls are present, the holographic interface for the odd looking Soul Link machine in the corner of the room appears. Holo tells the girls what their task is to be, with the bombshell of their failure to synchonise the answer in a weeks time meaning eviction from the programme. Will a Chuusotsu be able to figure out “What makes a wonderful life?” Only time will tell for Arue, Arara & Koiro. 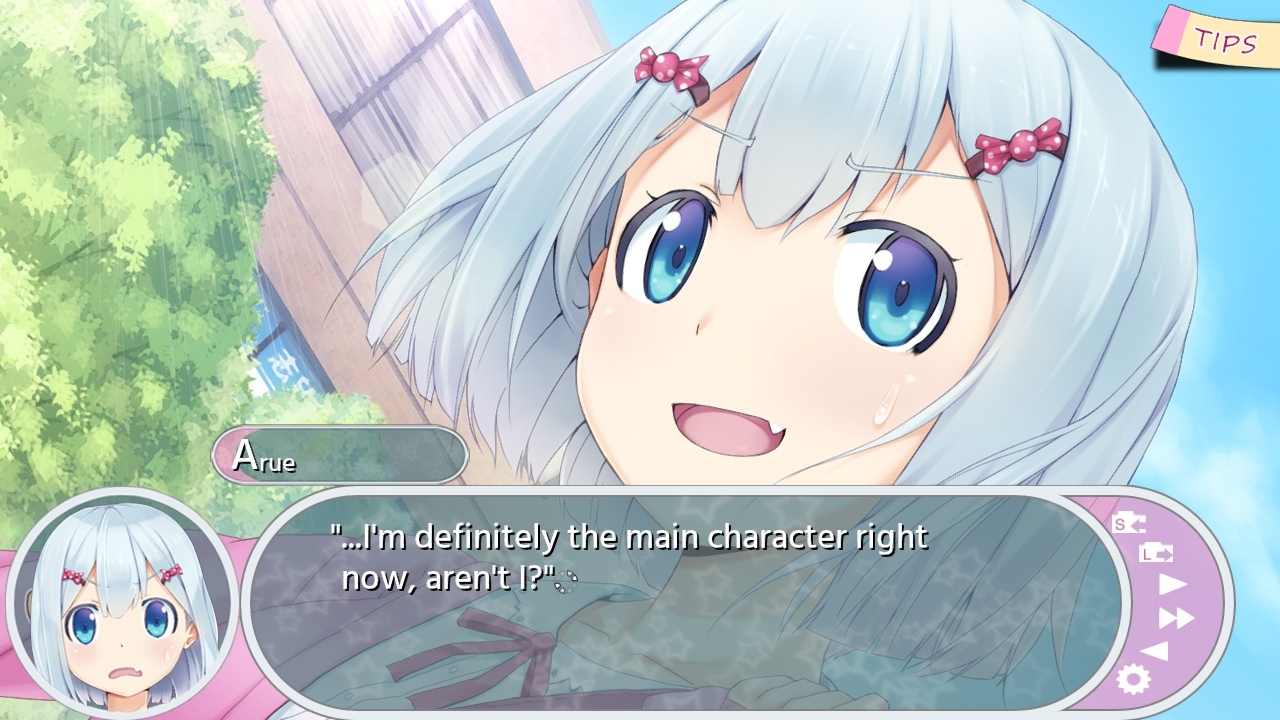 With no choices to speak of during your time in the story, given this is a kinetic novel, having the characters etc to hold things together during the novels runtime is paramount and this game excels here. Each of the 3 main characters has a different personality and history to bring to the table, but as the story progresses their chemistry grows in an enjoyable way. There are a few secondary characters as well who don’t always follow the same path as the main cast, but each has their own part to play within the overall story – the mystery of Kokoro & her past is ever present.

Arue is the central focus of the story though, and it is here that my only real gripe comes in. There are some pacing woes with regards to her backstory, at least for me, as it is always the focus over other characters and would lead to lengthy sections highlighting it. You’ll be teased with the prospect of learning about the other 2 girls in the trio, only to get a minute amount of info or complete subject change. The game does deal in some issues such as social anxiety, bullying etc, so it is a little understanding that the focus is on Arue for the most part as her past is filled with it – but it’s not like the other girls don’t have their own issues to get through.

This minor niggle aside, the story overall is a great one. If you like slice-of-life then you’ll feel right at home here as you watch the girls relationship grow over the course of the novel in fun & amusing ways. There are the occasional moment where the game shows it’s Yuri leanings, but it never goes full on with H scenes, so you wont have to worry about that if its not your thing. 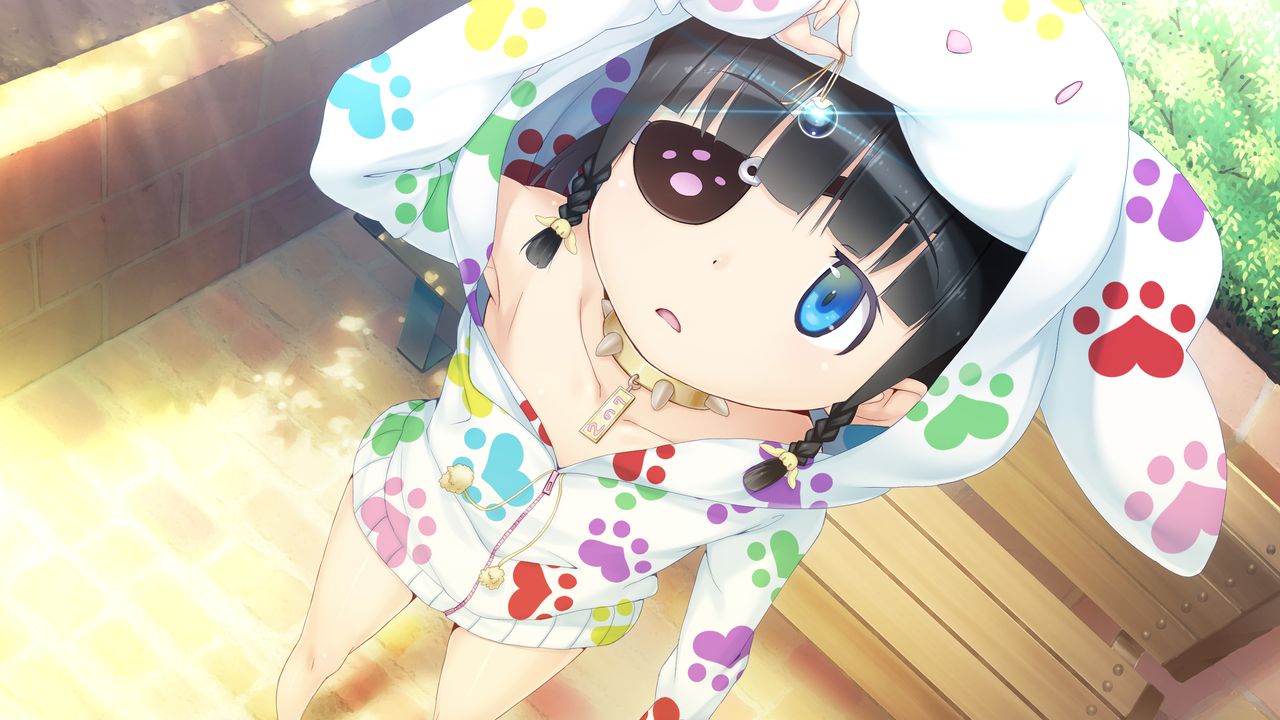 Another area of the game that’s done to a tee is the presentation, it’s colourful & packed with moe. Whilst the game only takes place in several key areas, there’s still plenty of detailed backdrops on show as the girls journey takes them to multiple areas, its the characters that steal the show. Each is suitably styled and fits their character perfectly, with plenty of expressions applied to the sprites during conversations to fit the mood. The CG’s throughout are highly detailed too and they always seem to spring up at just the right moment, with the odd reuse over the course of the story. There is surprisingly the odd occasion a fully animated scene is shown, but these are few & far between with limited use throughout. To be honest the visual design seemed pretty high quality overall.

It’s not surprising to find the audio matches up to the visuals.  The BGM plods away in the background with changing tones depending on the situation, but there’s also a really good Japanese voice over. The voice acting is done for every character and is used across the whole story. Delivery is excellent, perfectly fitting for each characters personality, and the actors do a good job of conveying how the characters feel.

Given this is a visual novel, the recommended specs are suitably low and should be playable on almost any Windows device these days. Personally I use a Windows tablet for added portability when sampling novels, which works well, but the relatively high quality to the art meant it still looked good when sampled on my TV through a PC. The addition of Steam cloud saves is a god send in that regard.

Chuusotsu! 1st Graduation: Time After Time is a fantastically presented kinetic novel with a great cast and interesting story – Things start off as a typical slice-of-life before moving onto some deeper themes & issues within it’s world. At around a dozen hours the length is just right, though the odd pacing issue makes some sections drag, and makes for a great read over several sittings if you’re looking for something fun & thoughtful to play through.