Tempest 4000 marks the latest entry in the legendary series, with Jeff Minter & Llamasoft at the helm, which looks to bring the classic arcade goodness of Tempest to the latest generation. Similar to TxK, 4000 gives us 3 different modes to play on 100 stages. Each stage is on a different geometric shape, with complexity and enemy variety increasing the further you get to the end, that allows for a steady difficulty curve. Each of the 3 modes offers a tweak to the usual fornula. Classic see you going from 1-100, Pure allows you to carry on from the furthest stage you got to and Survival gives you a set amount of lives to try and last you as long as possible on your route to stage 100. It can certainly be tough getting to the end of the game irrespective of the mode chosen, but there are online leaderboards so you can showcase your exploits to the world. 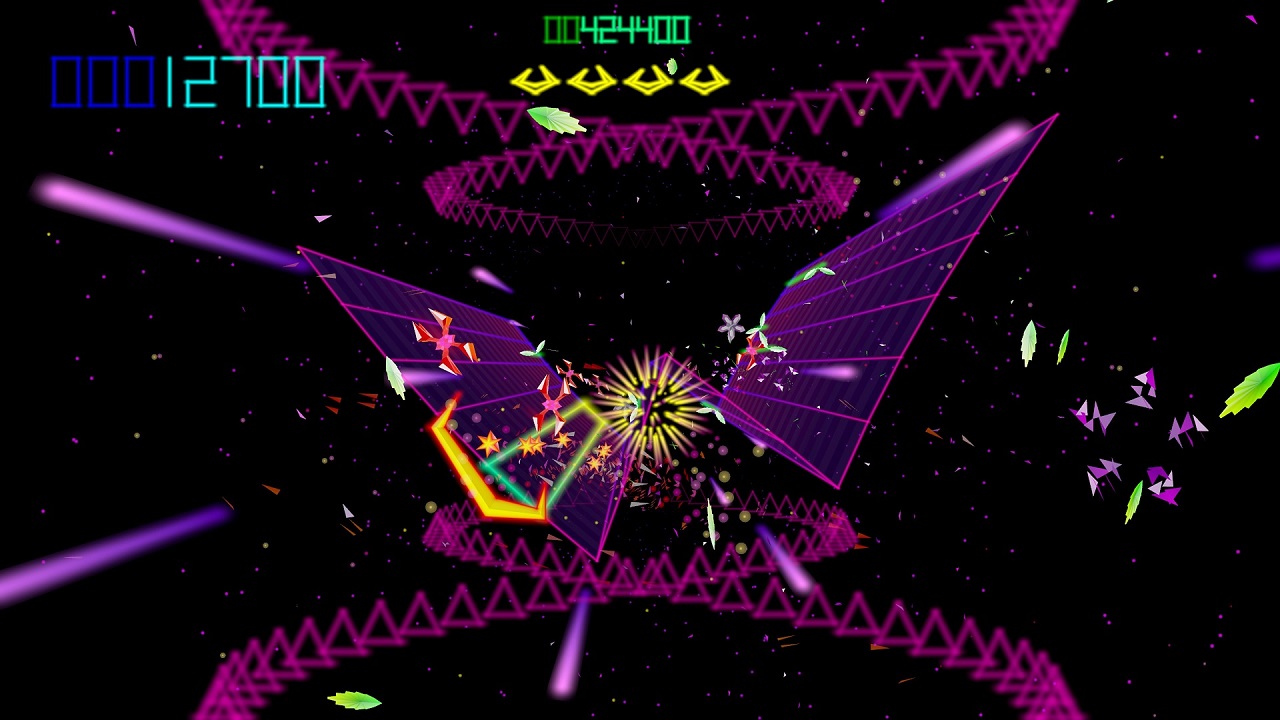 To be honest I’ve always loved the colourful wireframe designs that Llamasoft incorporate for their games, Polybius was a highlight on PSVR, so I was interested to see what was in store for the latest Tempest. Taking cues from TxK, there’s improvements across the board. The biggest uptick comes from the enemy designs. Gone are the colourful wireframe models to be replaced by fully fleshed out designs. They take on a look similar to something like Rez and are still brightly coloured, so they still fit into the general aesthetic of the game. The boost to 4K resolution certainly helps bring out all the new details and it’s easy to hit that resolution on almost any decent enough system, even my RX460 powered laptop could do it. The end of a stage is certainly boosted by the resolution & enhanced visuals. That moment you finish a final enemy and the screen goes psychedelic, with the shape below shattering into thousands of pieces as you tumble down to the next stage, is certainly a feast for the eyes.

Not to be outdone by the visuals, the audio side of things keeps the pace. A techno soundtrack plods away in the background as you play, but its really the sound effects that are the star of the games soundscape. Several synthesized voices also announce your progress and when certain powerups are collected, but as someone that fondly remembers the Atari 2600 at a young age, its the rest of the sound that’s interesting. I’m sure my ears picked up several 2600-esque sound effects thrown into the mix that certainly helps keep things grounded to Tempest’s retro roots. 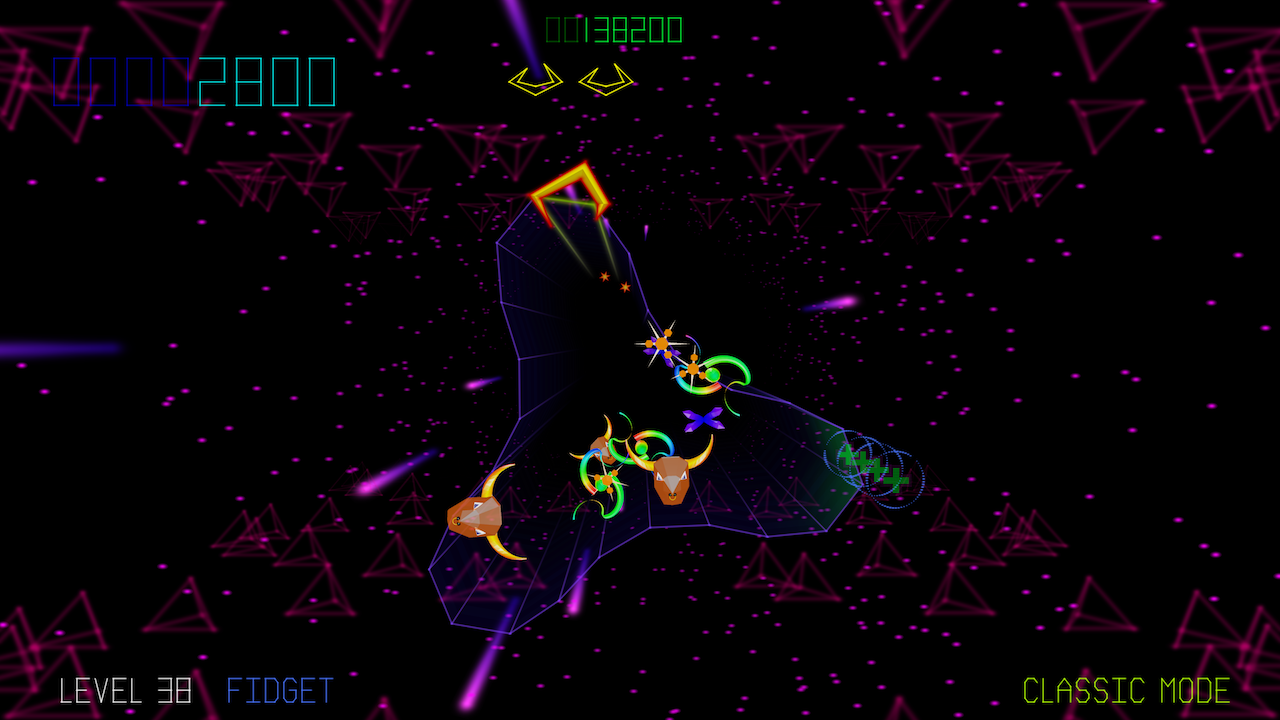 Tempest 4000 follows the mantra of ‘if it ain’t broke, don’t fix it’. If you’ve played any of the previous releases (Tempest, Tempest 2000, Tempest 3000, Tempest X3, TxK) then you’ll feel right at home with this game. As always you’ll find yourself at the peak of a geometric shape with enemies making their way from the bottom, Its your job to stop them. The first few stages are simple, but then the game starts throwing different enemy types at you which each require careful attention. Luckily for you there are powerups to collect that offer helpful abilities during each stage, boosting your firepower & allowing you to jump are just two examples. The game will also furnish you with bombs, great for clearing the shape of a torrent of enemies, and the occasional additional life. All you gotta do is stop your foes from reaching the top or blasting you from it, and if they do hit the peak, hope you have at least jump ability or an assistant. If you haven’t and they grab you, down you go.

I suppose my only real gripe is that which I mentioned at the start of the previous paragraph. The problem this game has is that TxK exists and I’d already played the hell out of it. If you’re coming from an earlier Tempest it’s not so bad, but 4000 shares so much with TxK that this just feels like an enhanced port in the end. Really, TxK is Tempest 4000 & this is Tempest 4K. Don’t get me wrong, Tempest 4000 is a sublime arcade shooter that still provides the kicks, but if we ever get a Tempest 5000 – its probably time to add to the formula. If we never get a 5000 release, then Tempest 4000 still marks the finest way to play the legendary series. 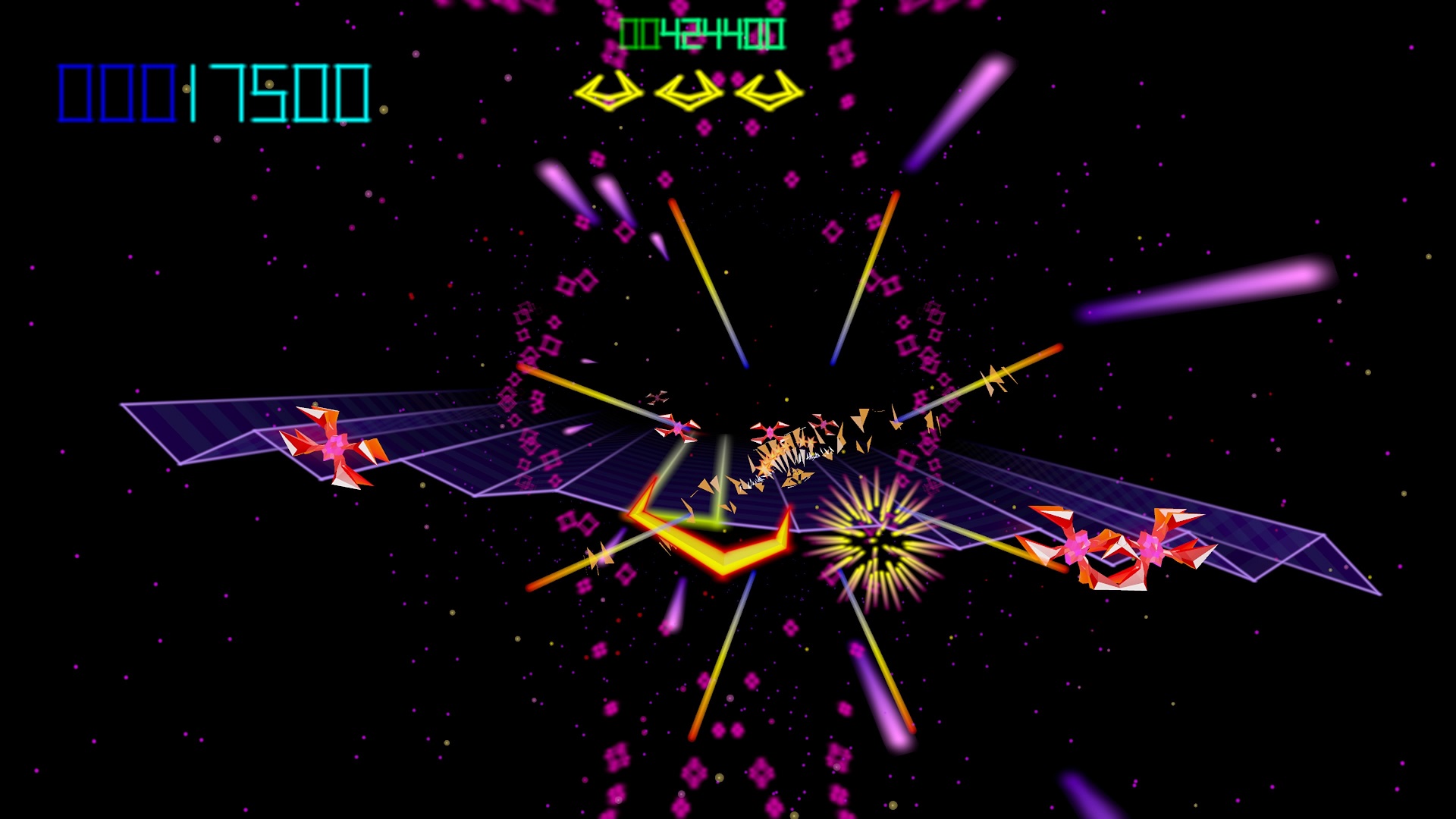 Tempest is Tempest at the end of the day, and this continues the series trend of refining everything around the games superb arcade core. Things are getting to the point where the formula is likely to need spicing up next time though, the similarities to the PSVita’s TxK are blatantly obvious, but there is no denying that even in 2018 -Tempest is still arcade perfection. Series veterans will likely appreciate what’s on offer, but newcomers will be the ones to get the most bag for buck if looking for something to blast in short bursts between releases. Looks like TxK came to other platforms after all.