Sorcery Saga: Curse of the Great Curry God is a light hearted dungeon crawler developed by Compile Heart and published on Steam by Ghostlight.

We are introduced to our heroine, Pupuru, as she falls asleep during her final school exam. Only the student with the highest score may enter the magic tower which is seen as a great prize since reaching the top will result in being handsomely rewarded. Somehow, even though Pupuru didn’t understand the test and fell asleep, she still manages to gain the highest score in the class. Her goal is now to reach the top of the tower and retrieve the magic orb stored there, all by herself. Once Pupuru reaches the top of the tower she is met with a strange but cute little creature she dubs ‘Kuu’, but she soon realizes Kuu is a glutton and has eaten the magic orb she came to collect.

In spite of his unusual choice of food, the pair quickly become inseparable friends, and Kuu even fights alongside Pupuru on all of her adventures.

Pupuru returns from The Magic Tower and tells her teacher what happened, but Pupuru’s teacher thinks she is lying and swiftly suspends her from school. At first all seems bleak for Purupu, but she soon ends up with a new sense of direction when the owner of a new curry-selling food chain in town threatens to make her favourite curry shop close down. Purupu will do whatever it takes to keep her beloved curry on the market. The story remains very light hearted throughout with plenty of humour sprinkled in, but some of the jokes become very repetitive by the end.

Every scene is full of beautiful and vibrant artwork, but as soon as you hit your first dungeon it’s a clear reminder that Sorcery Saga: Curse of the Great Curry God was originally for Playstation Vita only. The steam port does look a lot sharper than in the original, but the simple geometry sticks out quite a bit on a larger screen.  Pupuru and Kuu’s character models transfer well however because of their more cartoon-ish looks, later in the game you can have a bit of fun changing Pupuru’s clothing and accessory too. 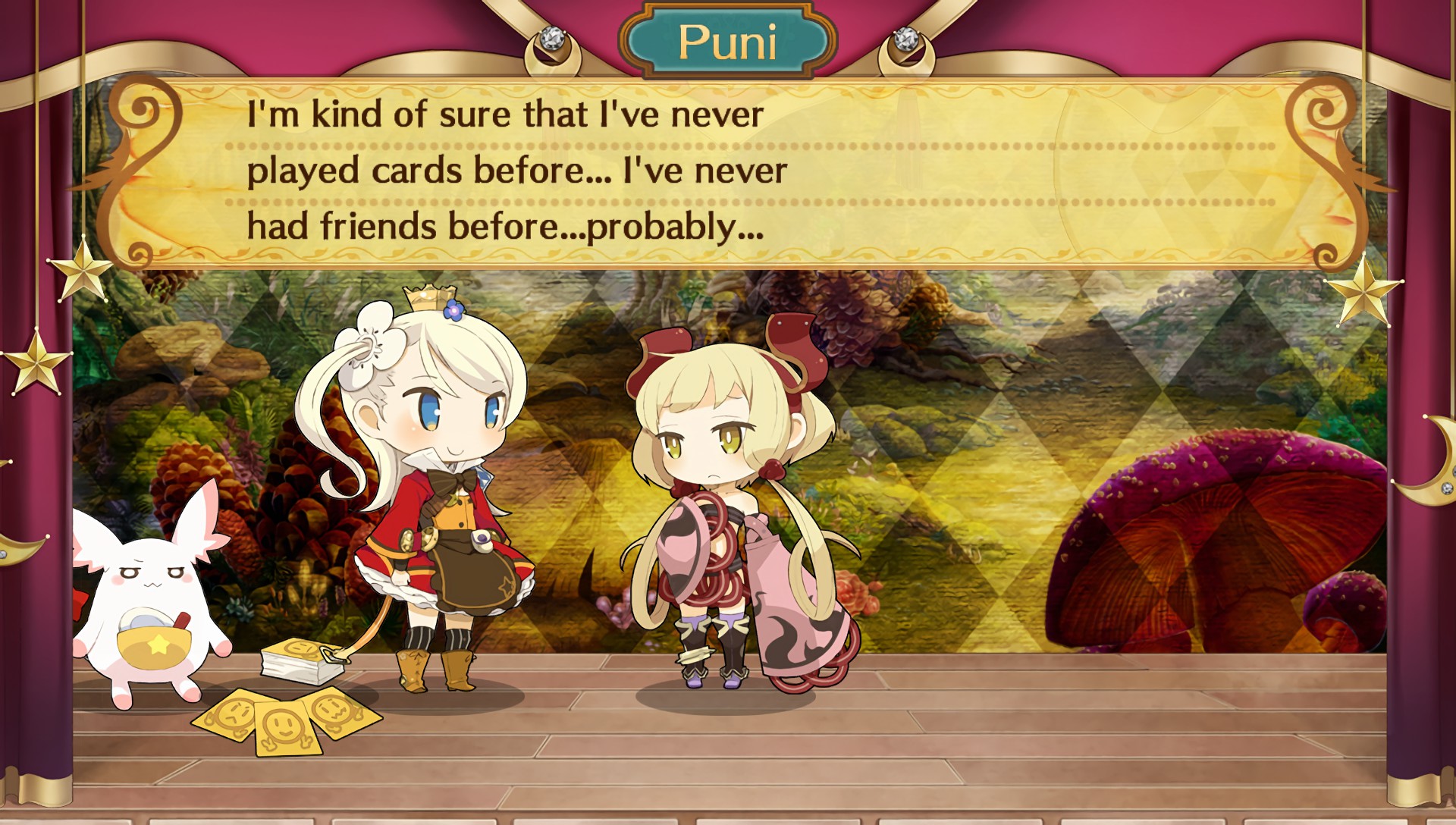 The music is lively and fun, sometimes even rather comical. Even though there wasn’t many different pieces of music throughout the game, none of them ever over-stayed their welcome. The soundtrack really helped make the more drab looking areas enjoyable to play through. It was slightly disappointing to see that there was no English dub available, especially given how few characters there are.

Sorcery Saga: Curse of the Great Curry God is a dungeon crawler with a turn-based combat system on a grid. The grid is visually hidden unless the player manually makes it visible, but even when hidden it’s easy to tell how many spaces an opponent is from Pupuru. Every dungeon has a short forest area you must fight your way through with Kuu before you reach the main part of the dungeon. All of the forests have a fixed map where as the main dungeons are randomly generated maps, this makes the forest areas feel like they are safer and a good warm up.

Each time you leave and go back to town your level will be reset to one, but the enemies always start off easy and you level up very quickly so this never presents a problem. Inventory space is fairly limited and you will quickly start to find this frustrating as there are many great items on each floor of every dungeon. A lot of time will be spent sorting through Pupuru’s bags trying to decide what you could stand to part with and throwing your junk at Kuu as most items heal him. 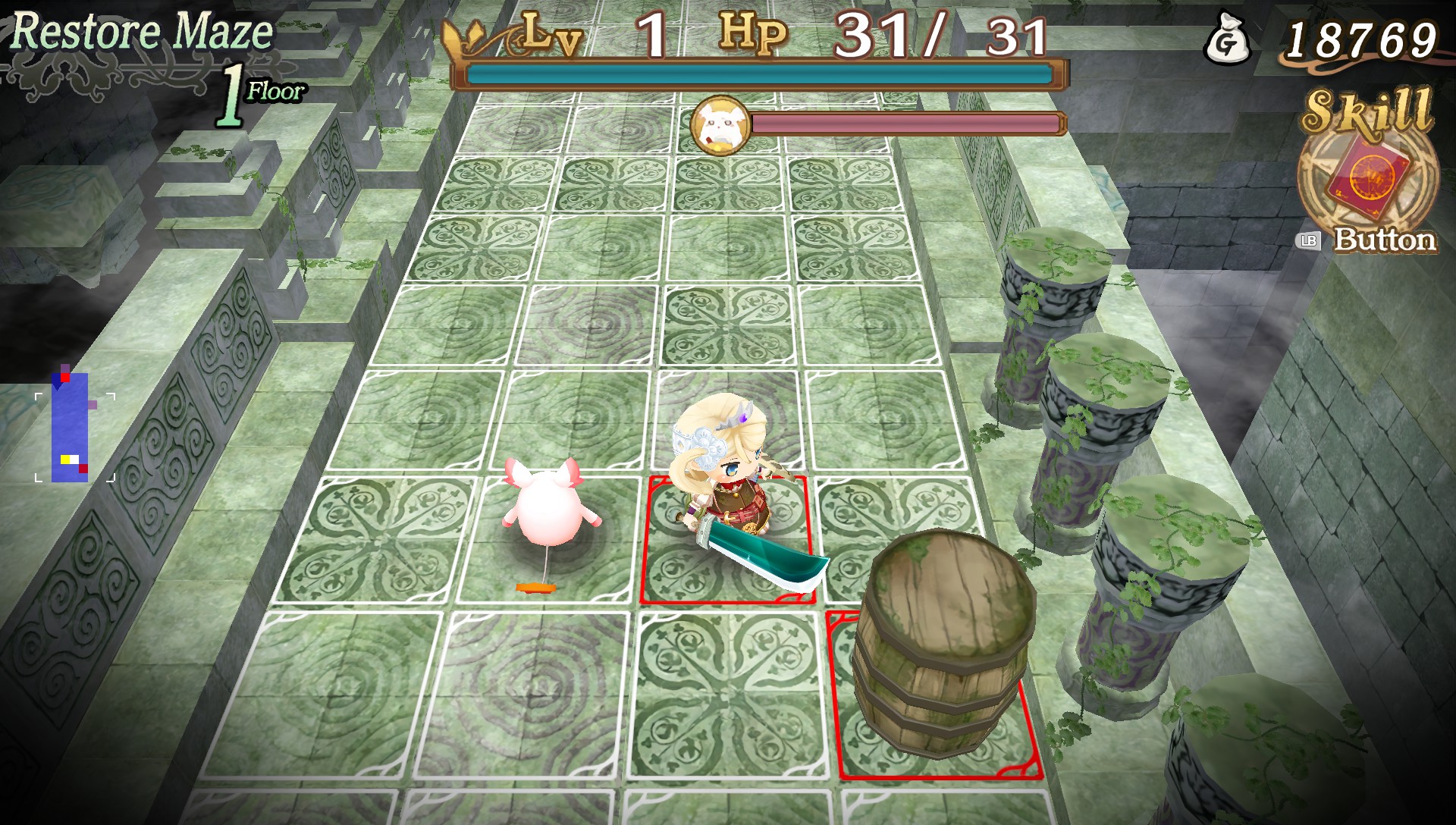 Overall Sorcery Saga: Curse of the Great Curry God is fairly short and easy game, you can use both melee and magic attacks but you’ll almost never need to use magic since just hitting everything to death is enough. You can combine your weapon with other weapons to power them up to the point where most  common enemies will die from one to three hits, and even make your own curry which raises your stats further still. If you do happen to get killed however, the penalty is rather high as you will lose all of your items, money, and you will lose any progress you may have made in the dungeon you were in.

Sorcery Saga: Curse of the Great Curry God is a fun, light-hearted and highly charming game with a good sense of humour. It may be short and rather simple, but it’s enjoyable enough that you will find yourself coming back to it again and again, especially if you’re a completionist thanks to the several bonus dungeons available after finishing the main story.

– Main story is quite short
– some of the gags get repetitive