Korea is a massively under-represented country when it comes to console gaming. While it’s true that they have had some success in the past (mainly with the Kingdom Under Fire and Magna Carta series, both seemingly now dormant), the country remains firmly attached to PC gaming with grinding focused MMORPGS being the countries chief gaming export along and MOBA’s plus RTS’s shearing a sizeable chunk of the game-playing populace.

The Comat: Recut finds itself in a unique place in that it’s none of the above – It’s a 2d side scrolling horror game with a charming hand-drawn art style. You play a high school student named Youngho who at the beginning of the game is struggling to cram-study overnight for his exams, naturally causing him to oversleep and find himself late in on the day of his first test. When he finally gets to school he’s told by a friend of the attempted suicide of another student at the school, the first in a series of events that start to spiral into more bizarre territory after Younho falls asleep during his test and awakes in a nightmarish Silent Hill-esque version of his school. 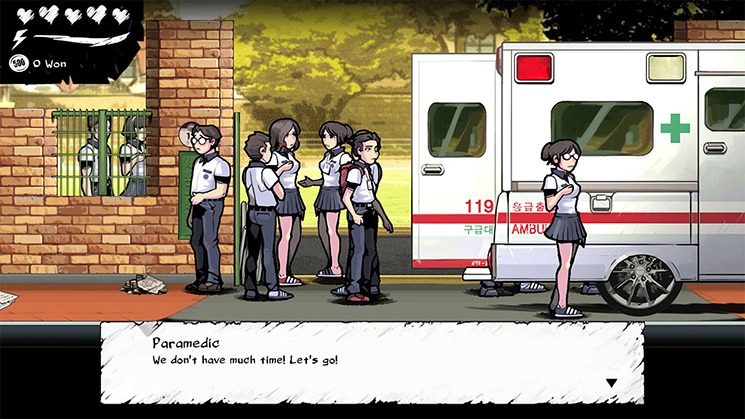 In all honesty, the story started to bore me within the first 10 minutes or so due to the characters falling into that peculiarly east-asian trap of taking 200 words of dialogue to tell you something that could’ve been communicated in 20 words of dialogue. It’s one of the reasons I can’t get into visual novels – they’re just too wordy. The concept of a high school student being transported to a dark version of their own world is obviously territory that’s already been pretty well trodden by the Persona series also, though it’s executed fairly differently here as poor Youngho has no way of defending himself from his and every high-school students true nemesis…their teacher. 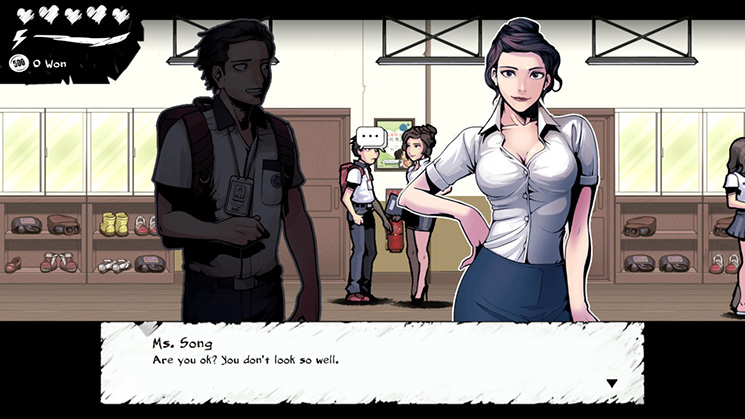 Yes, In this bizzaro-dimension of his school, Youngho’s teacher has gone from demure authority figure to deranged lunatic and is committed to hunting him down at any cost and true to any pure horror game, you can’t fight back. Youngho can hide in cupboards, crouch and hold his breath in hopes that she waddles past but once spotted the only act of recourse is to dodge and run, both of these actions depleting a very limited stamina bar. Being a simple high school student means that Younho can’t withstand many attacks and his hearts will drop down fairly quickly, reminiscent in style of the earlier Resident Evil games where player characters were ostensibly normal, squishy human beings rather than the invincible death machines of more recent titles. Using a blackboard to save is a cheeky nod to Resident Evil’s typewriter save system, as is the limited amount of inventory slots to carry stamina restoring food items. 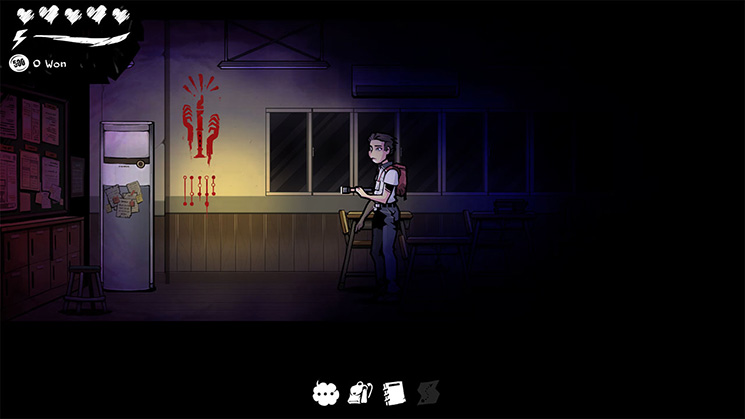 Visually, I’m conflicted about The Coma: Recut. While I appreciate that the game has a fairly unique art style seemingly based off of paper cut outs which complement the ‘rough’ aesthetic of the game, It really doesn’t do much to help in setting the tone for a horror game. Maybe the effects of years of playing recent triple-A horror games have made me immune to more quaint, 2D scares? The almost relentless barrage of jump-scares from Youngho’s teacher began to feel toothless within the first hour of the game due to the fact that visually, they’re all identical.

A key aspect of any horror game is audio which is unfortunately a big let down here. Budget constraints can no doubt be blamed for the lack of voice acting but even the sound effects remind me of the types of stock sounds you get in an RPG maker game. This saps the atmosphere out of the tense moments within the game. The music does a better job at setting the tone providing an eerie backdrop of sound to the gameplay with tracks that are clearly modeled after the haunting soundscapes Akira Yamaoka provided to the Silent Hill games. 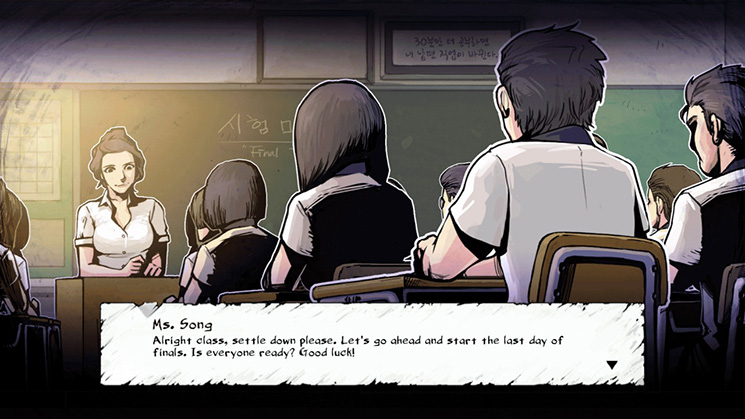 The Coma is a short game. At its price point this is no surprise, and though I didn’t get it myself, the true ending can apparently be achieved within about 3 hours of gameplay. As far as I could see there are no bonus modes unlocked after completing the game either so the only replay value is in trying to get the rest of the games multiple endings (of which there are apparently 5).

Though I appreciate what this small Korean team has done, sound design and repetitive gameplay are what holds this game back. Given more time and a bigger budget, I’d like to see what developer Devespresso Games are able to do as they’re clearly able to provide a unique spin on the horror genre.