The latest installment to the Sword art online gaming universe made its appearance last week with the introduction of the series 3rd ark Gun gale online or GGO in the form of SAO: Fatal bullet. The new title from Bandai Namco heads down a shooter styled action RPG route, over its usual magic and sword predecessors, so lets dive in and see how it holds up.

Storywise right of the bat something new happens from the rest of the series. You take up the role of yourself in this installment, not just create a new avatar/look for Kirito, but in fact play yourself – a newcomer to the world of VMMO’s who was invited to try out GGO by your childhood friend who wishes to reconnect with you after moving away. After joining the game as a level 1 you find yourself being taught the basics before stumbling blindly upon the most sort after item in the game. This is a new type AI of incredible rarity and the key to the games latest update, thus setting yourself up as a key figure in the games events.

Despite taking on yourself over the hero of the sword art series this time around, the opening hour or so of the game sees you very quickly become Kirito 2.0.. The game does all it can to make you fit those dark boots by giving you all the exact same traits as Kirito, with non of the personality or the harem. Instead it relys on “there’s just something about you” or “you have incredible luck/instincts” and tacking on old cast members who quickly blindly worship you as if they were talking to the black swordsman himself. For the most part I feel like this missed what I believe it was trying to do in making you the center of the title. 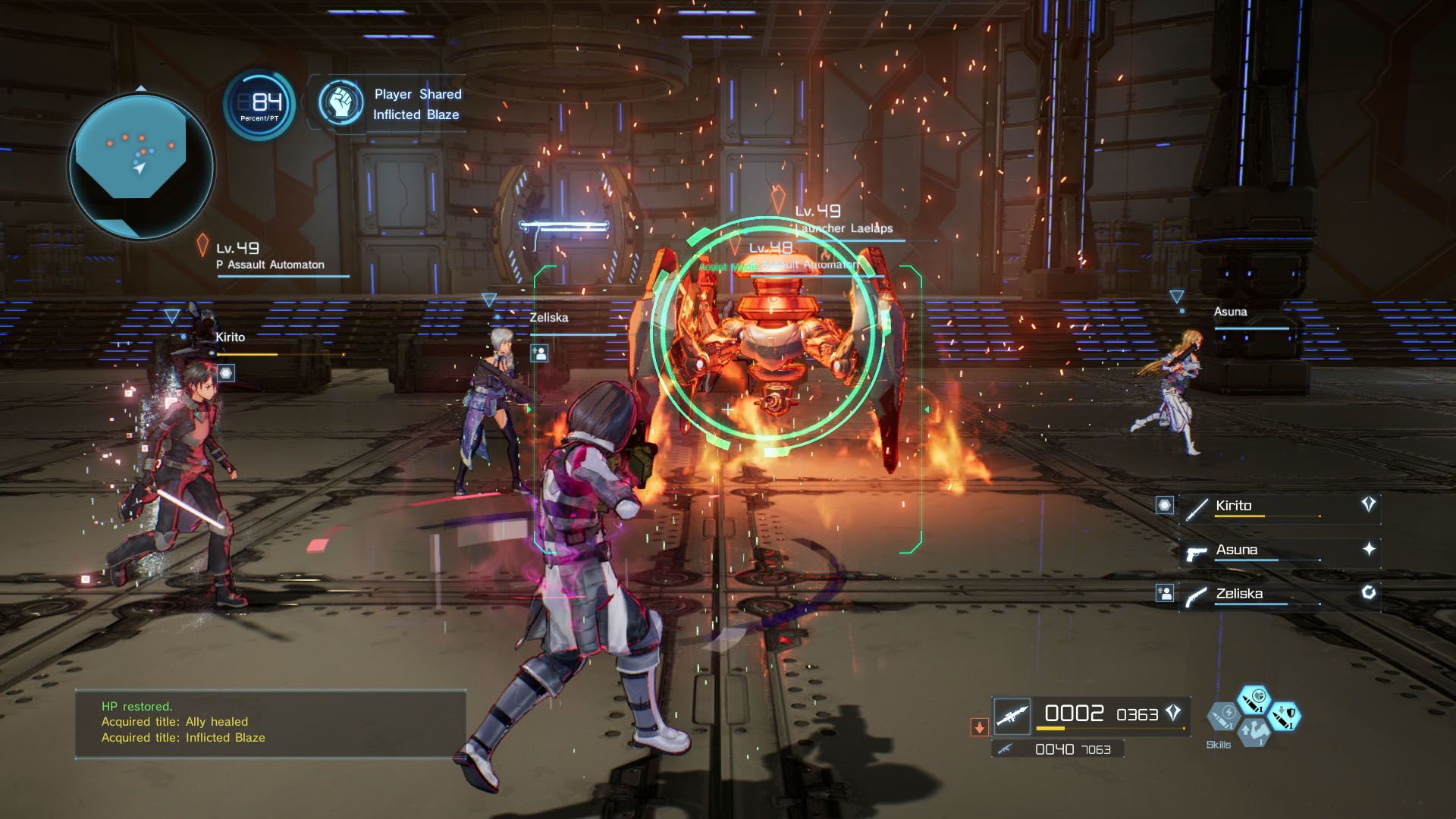 Visually the game takes on a new aesthetic from the previous title in both gameplay, and dialog scenes, which seems to bring the Sword Art series to a more current gen level than we had seen from the games earlier installments. Despite the more pleasing look however, it seems to come with a trade off in the form of frame rate instability. This is not particularly apparent for the most part, but in larger scale gunfights it becomes much more of an issue. Another item of note here is more amusing than anything, with characters hair possessing a life of its own at times, dancing around a characters head at random – though this seems to only affect those that opt for longer hair. It does hamper some of the more serious scenes when it looks like your hair is attempting to strangle other cast members.

The games audio track does well for setting tone with the more serious events and the like, with the field and town backing tracks fitting their roles. To be honest there is nothing really stand out about the back ground music though, but most of the title does come with Japanese voice acting. 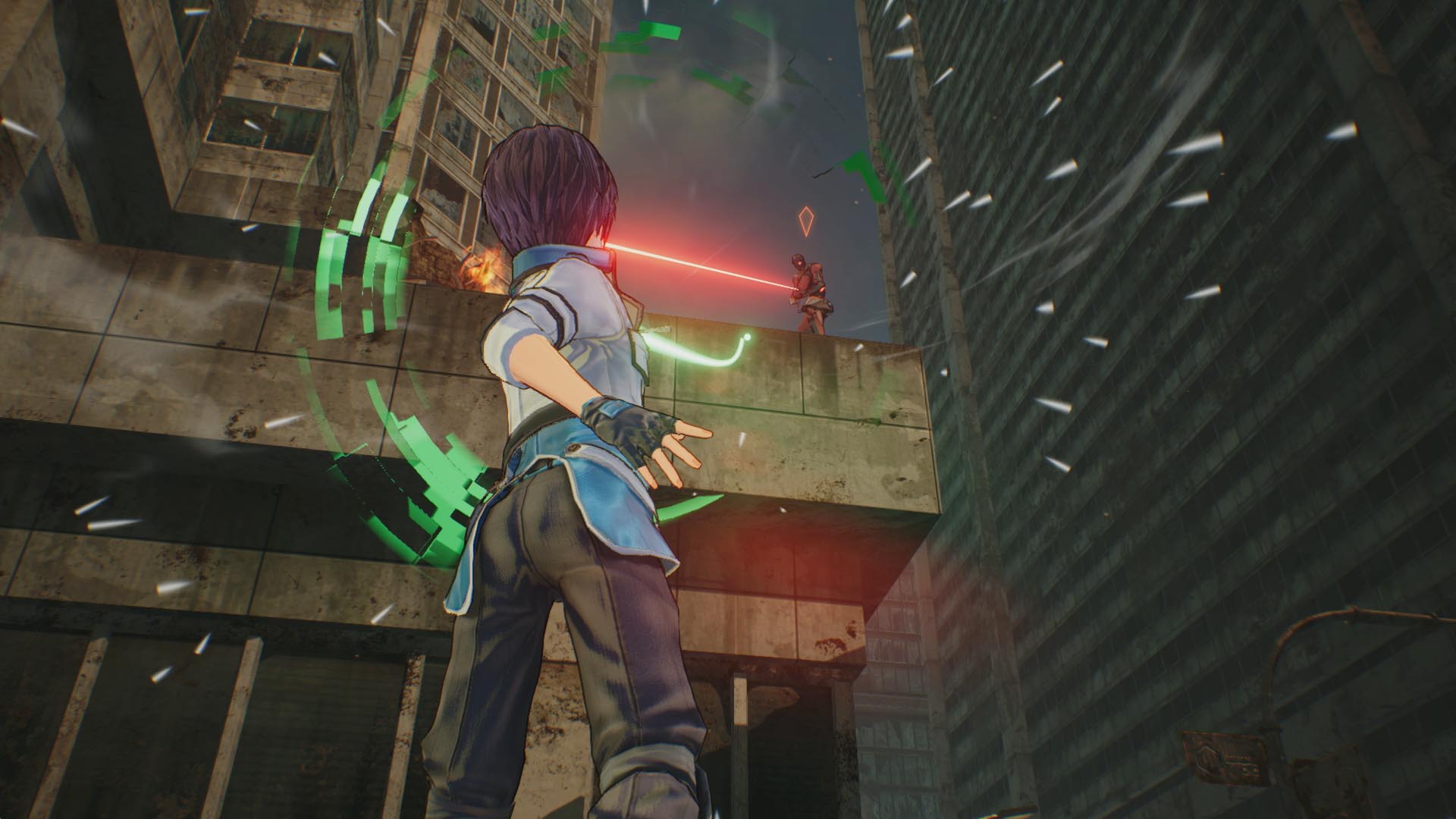 Game play itself is made up of two sections, the visual novel aspect of the story telling that will see you traveling between the multiple cast members to engage is some dialog and progress the main story. The other is field areas that see you travel across multiple maps and dungeons in order to strengthen your party and find the hints you need to be the first to clear the games “update”. For the most part I am a fan of this new take on the series. The story is fed to you in digestible chunks, if you exclude the initial bombardment of tutorial information that despite its quantity misses a whole lot, but Ill digress with that issue for this post at least.

The field exploration and where the bulk of the game play take place sees you form a party of up to 4 (including yourself) and traveling to one of a handful of different zones across the world of GGO. These zones are sprawling with monsters, loot, PVP “players” and other assorted challenges to sink your teeth in to. The use of guns and lack of magic however has caused a dramatic change compared to it predecessors, with environmental awareness, cover and distance playing a distinct effect on your survival. Personally I have to admit to loving the CORE game play. Running around and using tactics over sheer power of level to take down even the simplest of foes, with different gun play styles from snipers to rockets or a simple assault riffle or pistol, was incredibly fun. However it wasn’t long before I noticed my major fault with this title, and that been the god awful A.I for party members. Now don’t get me wrong I can excuse the A.I being dumb at times, but this is truly the worst A.I I have ever encountered.

And I am going to cover there sins in a list….
1. Prioritize healing seems to mean stand there and get shot
2. If the MC is down … so what anyone else down run into the enemy’s bullets
3. I went down in a field due to sniper fire all 3 team mates ran back across the map and jumped up and down.
4. They will stand right next to you till the end of time watching you bleed out without moving even if the foe cant target them/died by poison.
5. They have no idea what cover is.
6. A sniper will run up to a foes face before taking a shot.
7. They sometimes fall and die under the map.
8. They cant seem to get to areas higher than there knees. 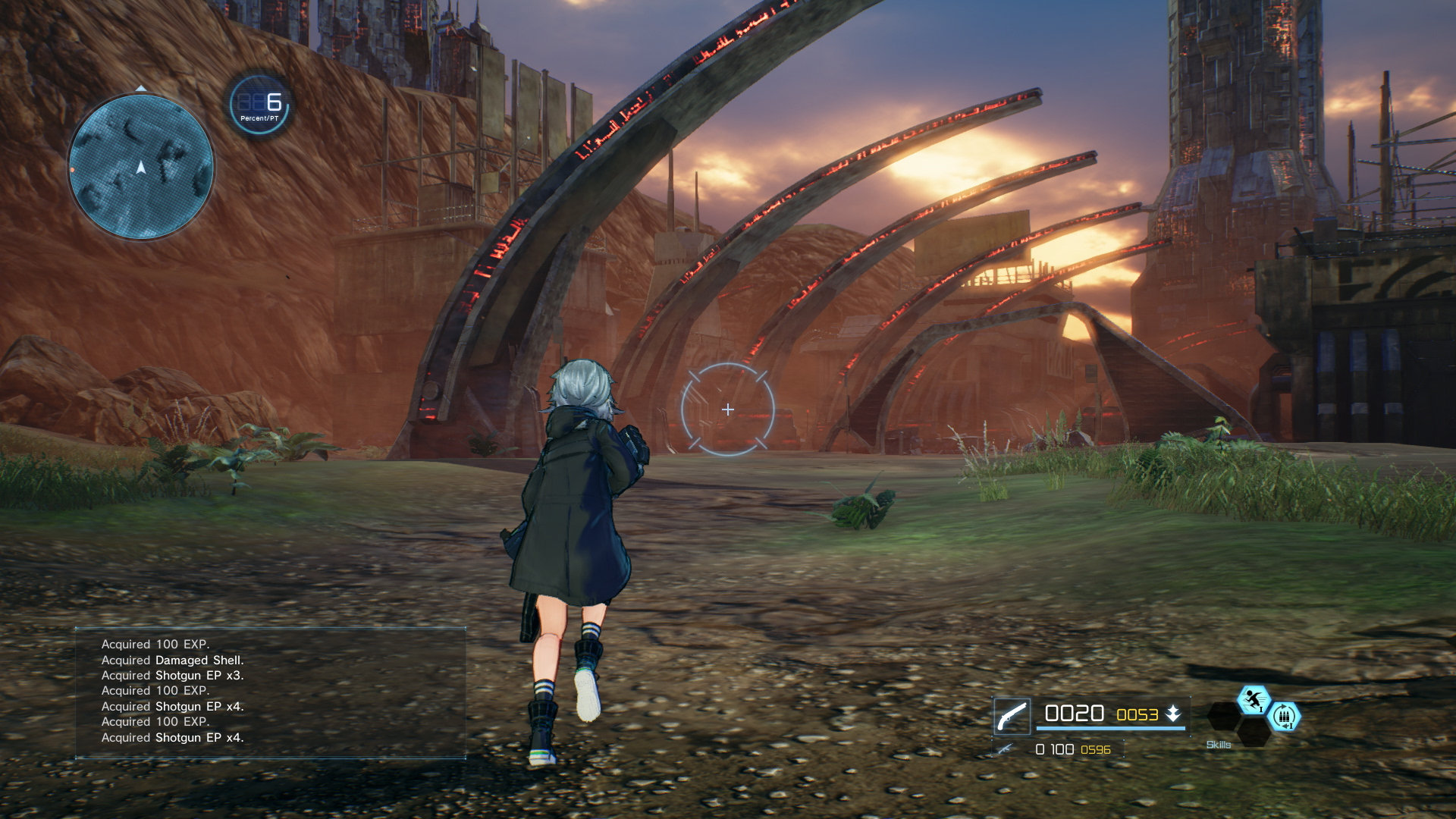 I could go on but I wont and instead state that, put simply, its so bad that even if they shot themselves it would be an improvement. In fact half the time that’s exactly what you want them to be doing. The most annoying part about this is I have played all the sword art games and every single version before this one had vastly more competent A.I.

Another bitter pill came in the form of the games online functions. As a whole the series seems to have drifted away from the ideal online game play of the first title, seeing it more and more simplified with each new title. Something that did not bode well with fans I know that would have ideally liked an online similar to that of the first installment. However this time around it takes it that one step further, seeing you fight bosses you have already bested in single player for no reward but a handful of items or dishing out more damage than your opponent. This quickly became redundant, boring, repetitive and ultimately forgotten about. 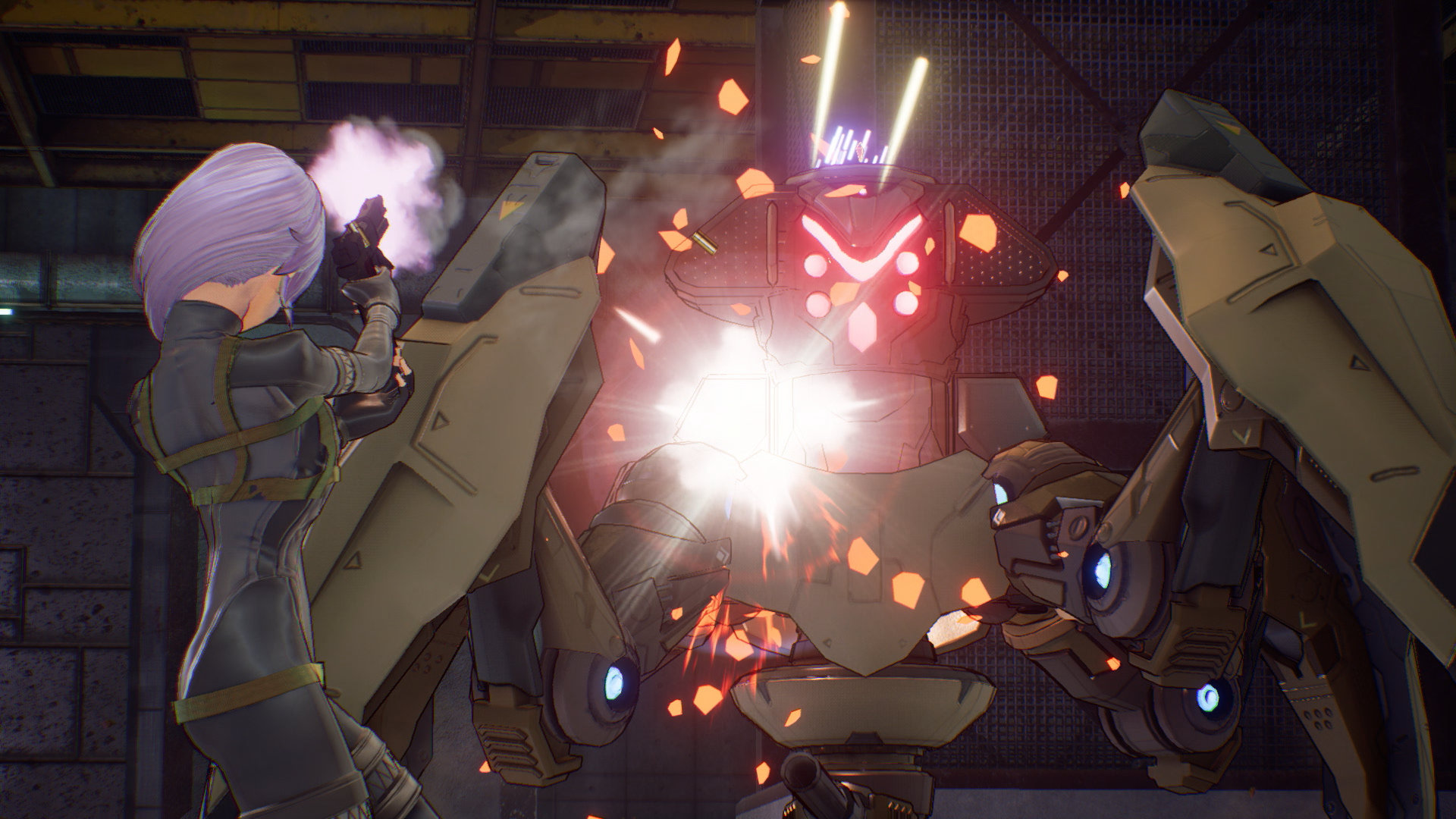 Despite the poor A.I and the few technical issues I’ve still found myself with 40 hours into this title already and I can very easily see it selling to the fan base, but cant deny it suffers greatly from said issues, the poor execution of the online gameplay and overall just feels unfinished. My recommendation would be to download either SAO Hollow Fragment or SAO Lost Song, or if you really want a RPG-esq shooter – maybe even Freedom Wars.