Axiom Verge originally released way back in 2015 on the Playstation 4 and most recently October 2017 for the Nintendo Switch. The reason for this review is to promote the fact you can now buy the game physically in store and online.

Axiom Verge for those unaware is a title which draws inspiration from Metroid, unlike most “Metroidvania” titles this forgoes the standard “Lite RPG” mechanics and is crafted to be closer to a core Metroid title.

The player is cast into the boots of Trace, A Scientist who’s experiment goes wrong and he seemingly wakes up on an alien planet, or does he?. The tale of Axiom Verge is one of mystery and discovery, you never quite know what’s going on until you’re supposed to and even then it can be a little vague.

There is collectable lore than can be found around the world to further boost the intrigue and despite being quite light it does leave an impression with you and warrents the various google searches you’ll be performing post game.

Visually Axiom Verge takes more than a few nods from the famous Bounty Huntress’ series, the alien world has clearly defined areas, going from gloomy caves to the vibrant overworld, it truly looks like an otherworld labyrinth.

The enemies are a mixed bag and the main character animates really well with his surroundings, the game does look a little on the lower end of the visual spectrum compared to others of it’s kind but it doesn’t hamper the experience.

On the audio side of things, Axiom Verge is a masterpiece. The sound creates a perfect ambience. it’s unnerving, isolated and really drives the “this ain’t Kansas anymore” feeling of waking up on an unknown planet with no idea what is going on.

Seriously the music in this title is sublime, from the ambiant tracks to some of the thumping action tracks, each is on point and really helps build the adventure infront of you, really top marks.

So what happens when you wake up in the cold and unforgiving world of Axiom Verge?, well you find your alien weapon and blast away unknowns while navigating this labyrinthine world, finding upgrades to help further the exploration and try to get to the bottom of what is going on.

The key factor in Axiom Verge is the exploration, there aren’t giant arrows pointing to where you need to be, no waypoints, just you and a ticket on the shoelace express. Often you’ll feel you might not be going the right way and then something will trigger or you’ll find a new secret area or a boss fight, it’s the joy of discovery that really drives this title.

The combat is slightly underwhelming, you are given quite a few upgrades for your gun but outside of the boss battles nothing really feels fun to fight. The lazer drill steals the show and is fantastic in combat and exploration, breaking bricks in an instant and leading you to those delicious secrets. 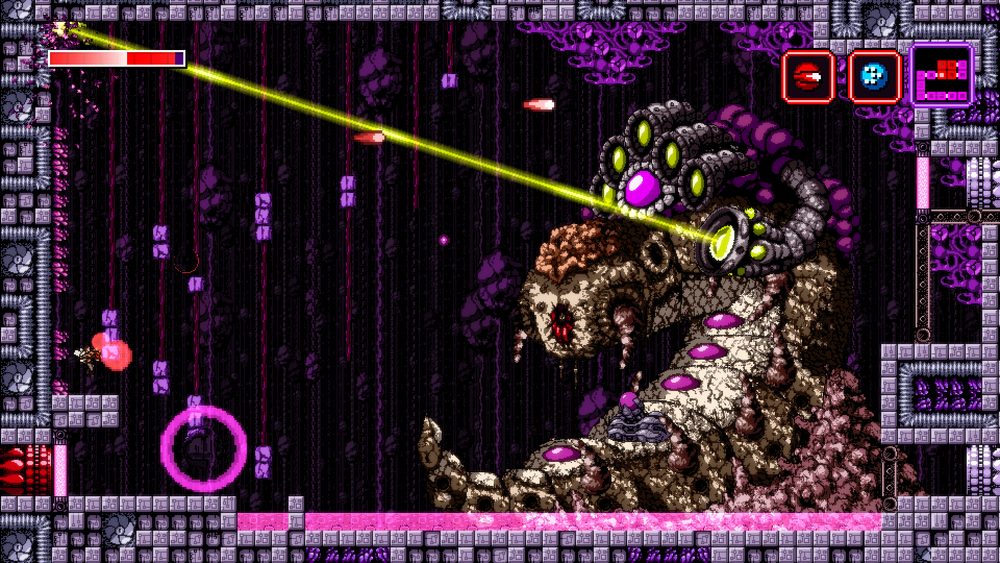 An hour or so in you’ll find the “Glitch” ability, this allows you to tamper with the world and change it, sometimes for the good and sometimes for worse. An example comes to mind with a particular nasty enemy, once glitched he becomes much more manageable and drops health, another enemy became alot stronger when glitched, once again it’s discovery.

The main story lasts at around 10 hours on your first run and a few more hours mopping up the extra bits, the game features multiple endings depending on your completion rate and there is also the “Speedrun” mode for budding “runners, this keeps enemy placement the same, gives you accurate times between bosses and allows you to skip dialogue and keep that time down.

Axiom Verge is a fantastic title with quite the standing in today’s gamer society, often hailed as the true successor to Metroid and well loved by most of it’s players. Unfortunately for myself the title never quite “Clicked” with me in the way I wanted it to, I slogged through the latter half of the game and yes I had fun throughout but I never truly fell in love with the title.

Axiom Verge is a aural masterpiece with some fantastic visuals and stellar gameplay to back it up, mileage will vary depending on love of the genre & the story shouldn’t really be considered more than a sweet extra. If you haven’t played Axiom Verge then now is the best time to try it.