Following on from the events of The New Order, Wolfenstein once again puts you in the shoes of B.J Blaskowitz, Nazi killing, monologue slaying all round bad ass. Starting off somewhat worse for wear, New Colossus sees the resistance group seeing retribution for their actions, leading them into a Nazi dominated U.S and even further!.

Much like it’s prequel, New Colossus has some of the best writing in the genre. The story manages to escalate several times, leaving you when an honest sense of “Where is this going next?”, one of the most charming cast around containing the ever smile inducing Max Haas, B.J’s heavily pregnant wife, an ex Nazi & even a pig!.

Remember that choice you made in New Order?, if you don’t or you haven’t played it you can make it again in New Colossus. This choice greatly impacts the cutscenes and tone of story in places, one of the choices gives you a goosebump inducing version of the ending!. 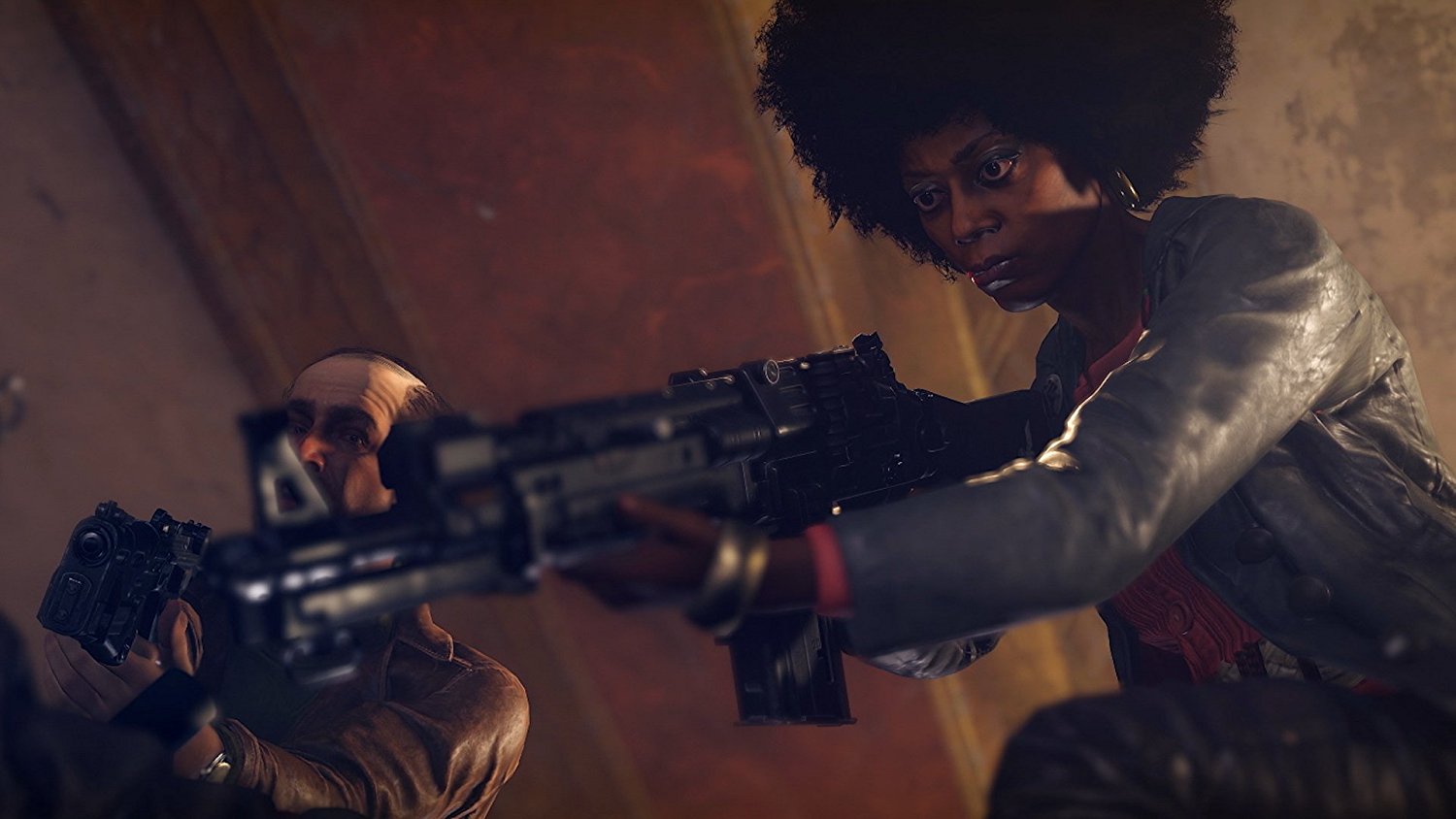 Graphically New Colossus was a powerhouse on the Ps4/X Box One with its beautiful visuals and blistering fast speeds, for the most part this has transitioned well onto the Switch.

Naturally I wasn’t expecting the full shebang with this Switch port but I’m happy to say I was taken aback by just how good the game still looks!. The odd visual does look really low res and muddy but overall on both handheld and docked the game still looked amazing and manages to capture the tone of the story brilliantly. The major hit I noticed was in the character models, they looked very fuzzy and that chips away a little at the emotive details added to them throughout the tale.

The performance has naturally taken a hit which was to be expected after last year’s Doom port. Though it really doesn’t hold the game back it does run at 30fps now rather than the 60fps the One/Ps4 versions did. There are also a few instances of slowdown when the screen gets quite busy which means the latter half of the game does start to lag a little. 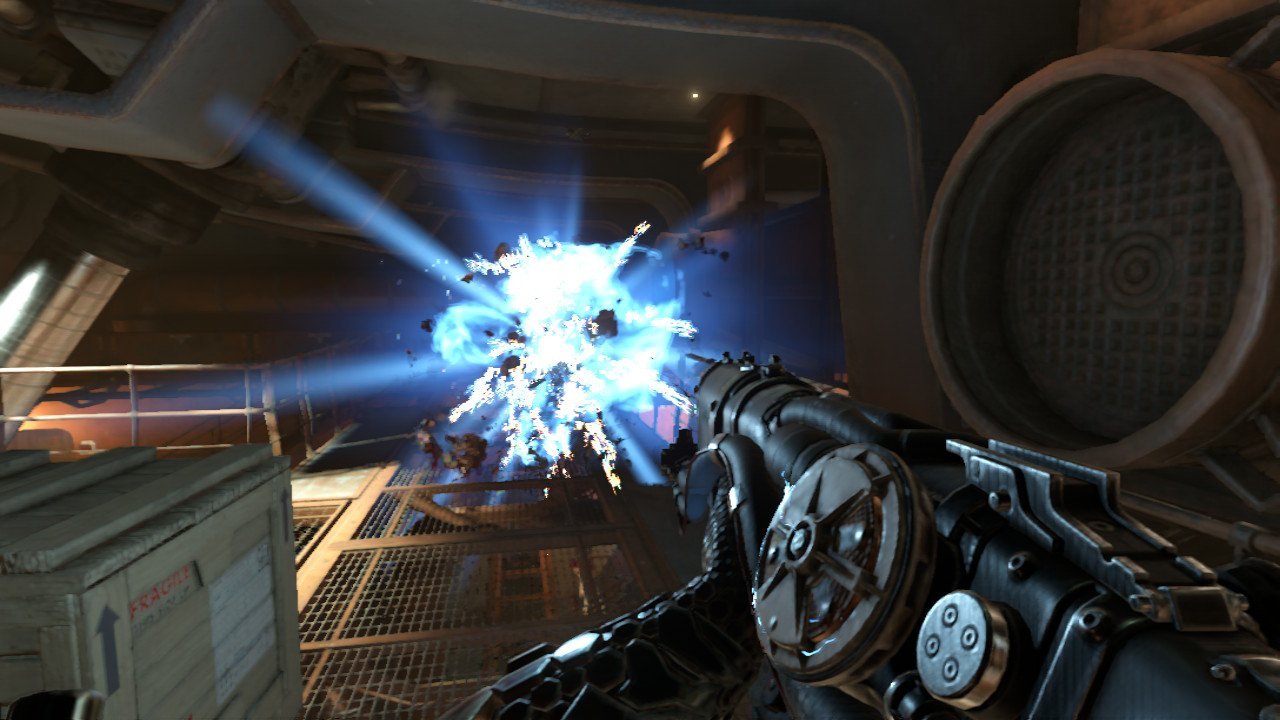 There are few games that can illicit responses with much such as goosebumps, genuine shock and physical smiles, Wolfenstein 2’s outstanding story managed this carried by it’s phenomenal voice work.

There are several scenes throughout the game where you get so drawn into B.J’s musings, tough topics such as racism, Hitler & drug abuse, all of this is done in such a natural way and is truly a testament to the writers and voice actors.

Another brilliant nod is throughout the campaign you can find “Nazi music” which is popular music done with a twist. It’s makes searching each and every nook and cranny of the stages to get every one of these. 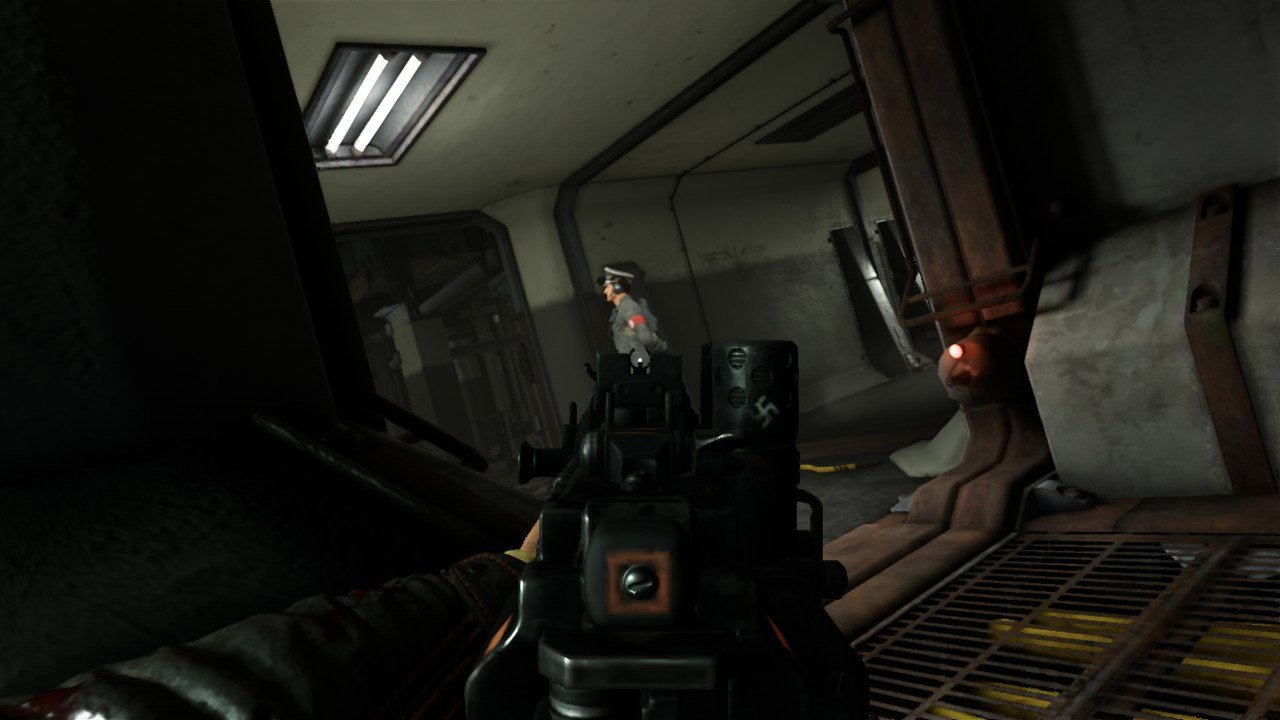 Wolfenstein 2: The New Colossus takes everything the previous 2 titles did (New Order and Old Blood) and tweaks it to make it an even more visceral First Person Shooter experience.

The movement is fluid and fast, you’ll be able to react accordingly to any threat with skill and finesse, the game also reacts to how you play and certain actions level up B.J to give him new skills I.E a certain amount of headshots unlock a slo-mo ability when spotted.

The level designs are for the most part fantastic, alot of instances allow for stealth or all out action depending on how you want to tackle that section. Later on you get to choose some extra equipment which will further expand your choices (you can get all 3 of these so don’t worry about making the “wrong” choice).

Some of the levels are a little maze like at points with samey environments and obscure exits, this happens less than a handful of times but it’s still there and does impact the pacing somewhat.

The main campaign lasts around 12 to 15 hours which is easily taken into the 20 Mark with the plethora of side content on hand, examples are playing the original Wolfenstein, remixed versions of old areas, shooting ranges and mountains of collectables. It’s not over quickly but fortunately the gameplay is that solid you’ll be itching for more!.

Wolfenstein 2: The New Colossus still lacks any sort of online multiplayer which is a shame after the quality of Doom’s. Another aspect that I felt harmed the game was the lack of damage feedback, it seemed that only some would register so I’d lose alot of health before I realized, causing more than an few deaths.

Outside of those few niggles, Wolfenstein 2: The New Colossus is everything you could want in a sequel, it’s bigger, louder and in my opinion better. The new characters aren’t quite as developed as in the last game but still ooze charisma.

Wolfenstein 2: The New Colossus isn’t only the best FPS on the Nintendo Switch, but speaking personally, one of the best FPS games I have played. It’s rare I go straight back through a game after I’ve done, but in this instance I made the other choice in the story and went head first into Nazi territory again. Long live William J Blaskowitz