Touhou Kobuto V: Burst Battle is the latest Touhou Project game to see a release on the console & handheld systems. Instead of opting for another RPG type game, NIS America have decided to offer us a bullet-hell fighting game. Sounds interesting right? Let’s see if it turns out as such… 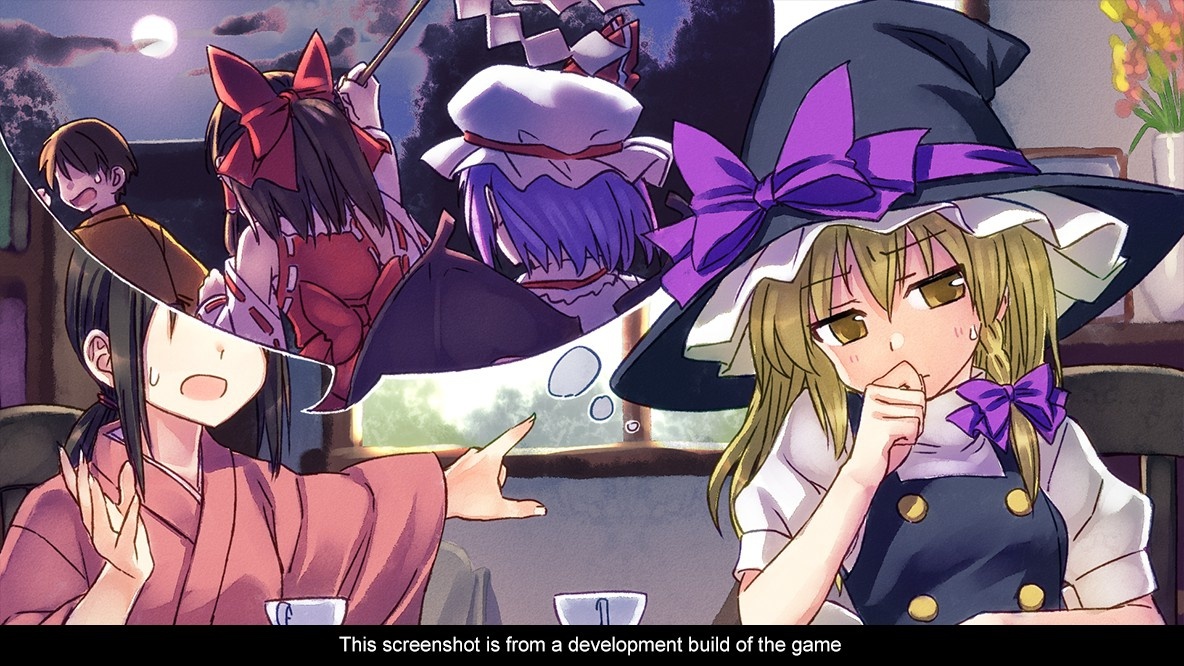 The story mode opens up with Reimu, the shrine maiden of Hakurei shrine, really feeling the pinch as donations to the shrine dropped. As a couple of chaps are about to leave a donation, they begin discussing rumors and decide against the donation after all. Rumors abound that Reimu has been helping Remilia Scarlet from the Scarlet Devil Mansion. who in turn has apparently been attacking humans. Needing to squash these rumors in the hope of donations picking up, and also in need of a good meal, Remiu decides to head off to the mansion to find out what is going on.

This is just one of the stories available, as each character within the roster will get their part as the story mode progresses. The fights are broken up by CG’s and dialogue sections that play out like a visual novel, which makes for a good turn of pace as the constant fighting can be a slog. To be honest the stories themselves aren’t spectacular, tho they have their moments, but fans of the franchise will no doubt appreciate another take on the universe. Once you’re done with the story there are Arcade & Survival modes to play, but with these you’ll just be doing the same as every other mode in the game only now with different rules. Longevity for the game is offered via VS modes. The main one is versus human players, and here the game offers online alongside offline split screen. Honestly split screen was a surprise and worked well when tested. It’s good to see there’s still games out there willing to offer such a mode. 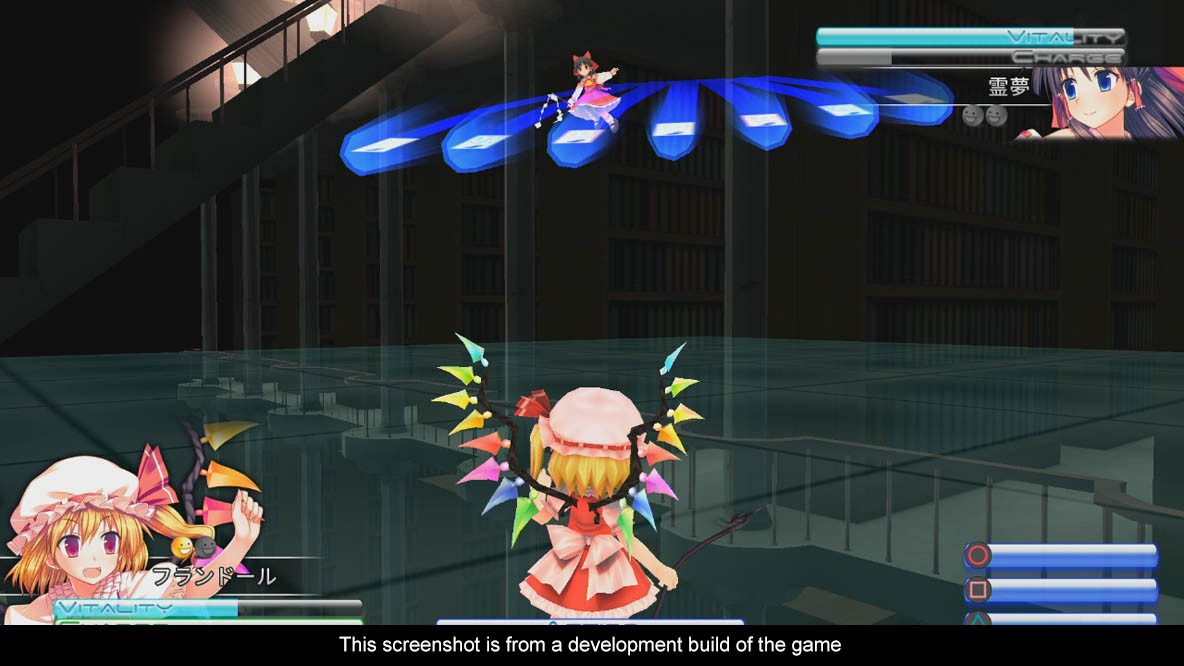 You’ve no doubt taken a quick look at the screenshots yourself and seen how underwhelming the presentation is. At its worst the game can look like a Ps2/Ps3 cross-gen release, and at its best not much better. To be honest this is mainly down to the environments that are devoid of the detail expected of a current generation release. Texture detail is lacking, barely an environmental effect in sight and each stage lacks anything of note in the background to make it at all eye catching. Special effects during the fight are serviceable at best, the game does throw quite a few of them out at a time which helps it to look a tad more impressive. There are some good aspects tho, character models are decent and each looks unique to the next, with sprites used during dialogue also good. The main take from all this at least is that the game runs flawlessly with no hiccups to speak of, which should bode well for the handheld releases.

One of the draws to the game for myself was the inclusion of a VR mode. Going in I expected nothing more than a simple bolt on with everything staying the same, but there was a decent tweak. You are now more like a spectator on the side following the action as it unfolds, with full control over where you want to view. This does have the advantage of allowing you to keep up with the action a lot easier than the standard mode and there’s not really a drop in graphical fidelity, just be wary of your foe jumping behind you as then things can get hairy. There’s nothing groundbreaking about the VR implementation, but its the preferred way to play for me as it doesn’t suffer from the lackadaisical camera you get during regular play. 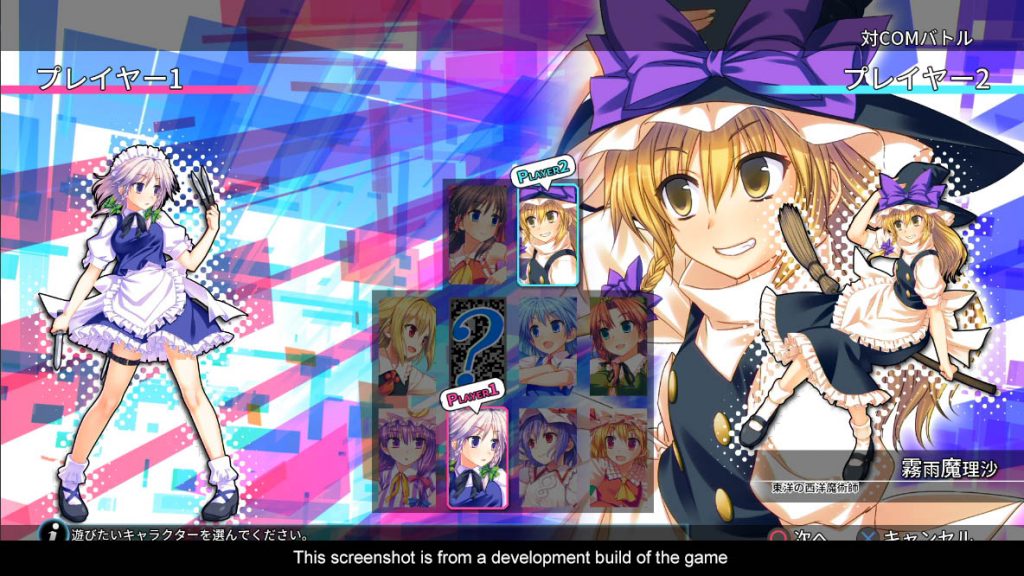 Described as a bullet hell fighting game, it does indeed fit that description. The game sees you squaring off one-on-one with a foe until only one remains standing. You’re given free reign to move around in the arena, which is needed to dodge your enemies attacks and try to get yourself into a good position to counter. There’s always plenty of spells to dodge as each character comes loaded with 3 different attack patterns, with a special charge attack built up during the course of battle that you can unleash to finish off your opponent. Jumping and dashing will become your best friend as you try to avoid damage, but they can also be used to do different attacks – even to get up close for some fisticuffs. Melee combat affords a little more damage and the odd kick while they’re down, but it is risky as mistiming can lead to a fireball in the face. The 9 character roster offers up a little variety as it comes with their own attacks, but things could still get repetitive over long sessions. It all sounds decent doesn’t it? And it is, aside from one drawback I’ve mentioned before – well it does also get a little repetitive after a while, but that’s a given. The camera can sometimes get in the way of the fight, tho usually only when the pace picks up, as it struggles to follow your opponent and keep them in view. It’s a generally good game to play overall, but the camera is a key component of a game like this and it is unfortunately detrimental to the experience when it gets frisky and manual control of it doesn’t ease things as much either. The VR mode fixes this for the most part, but not everyone is going to have access to that.

Touhou Kobuto V is a curious release one usually wouldn’t expect to find on a console. Unfortunately tho it’s quite the mixed bag. For everything good about the game, there’s usually something to counter it that pulls it back down. There’s a decent game here if you can get past it’s faults for sure, or you need a Touhou Project fix, but then it may be better to seek out the handheld versions where these faults won’t be so prevalent.