Over the last few years, older genres of games seem to have been making a comeback, bullet hell, scrolling beat em ups and Metroidvania titles seem to be at the forefront of this. In remembering one of the originals of the Metroidvania genre, Wonderboy III got a remake on the current gen titles and reminded everyone what Wonderboy could do. Now it’s time for the spiritual successor Monster Boy to give it a crack!.

If you’re not familiar with the Wonder Boy/Monster Land franchise it’s worth hitting up YouTube to get acquainted with the ins and outs of this confusing franchise. Monster Boy is Wonder Boy in everything but name, even to the point it was created alongside Ryuchi Nishizawa the original creator of Wonder Boy in Monster Land.

Monster Boy puts you in the adventurous boots of Jin, the obvious main character, blue haired hero who’s uncle Nabu has activated some kind of magic and is turning the citizens of the kingdom into animals and generally creating quite a problem!. You take up your sword and shield and vow to stop him and get to the bottom of what’s going on!.

It’s not long before Nabu deals his magic your way and you’re forced to explore the world as a Pig!, then a Snake and several other animals in your quest to save the Cursed Kingdom and return to your lazy life!.

The story is overall quite charming, the script has some genuine laugh out loud moments and most importantly it never oversteps it’s mark and goes on for too long, the game is about adventure and not in depth story telling and Monster Boy has the nuances to create and engaging and charming tale without spinning you yarn after yarn. 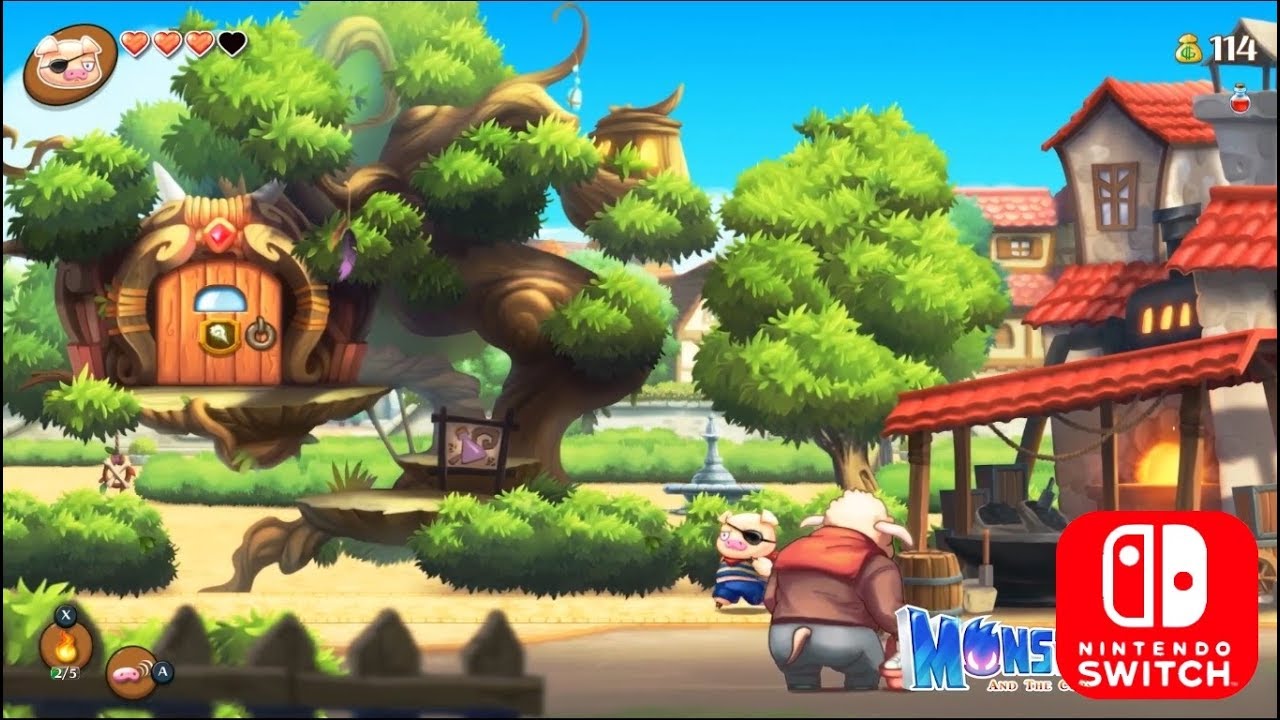 The art style and animation in Monster Boy and the Cursed Kingdom initally didn’t wow me too much in its opening section but once you get out of that the game really comes into it’s own and stands toe to toe with that of the Wonder Boy III remake which until now was the standard for myself. The characters all have such a brilliant charm about them with over the top facial animations and the way they react to the events surrounding them. The Human/Animal citizens are all well drawn and thought out and part of the fun is guessing why they have been turned into that particular animal.

The enemies are also fantastically created and some even come from the Wonder Boy franchise which is just one of the many many nods this game has to it’s home franchise, here’s a hint look at the church windows!. 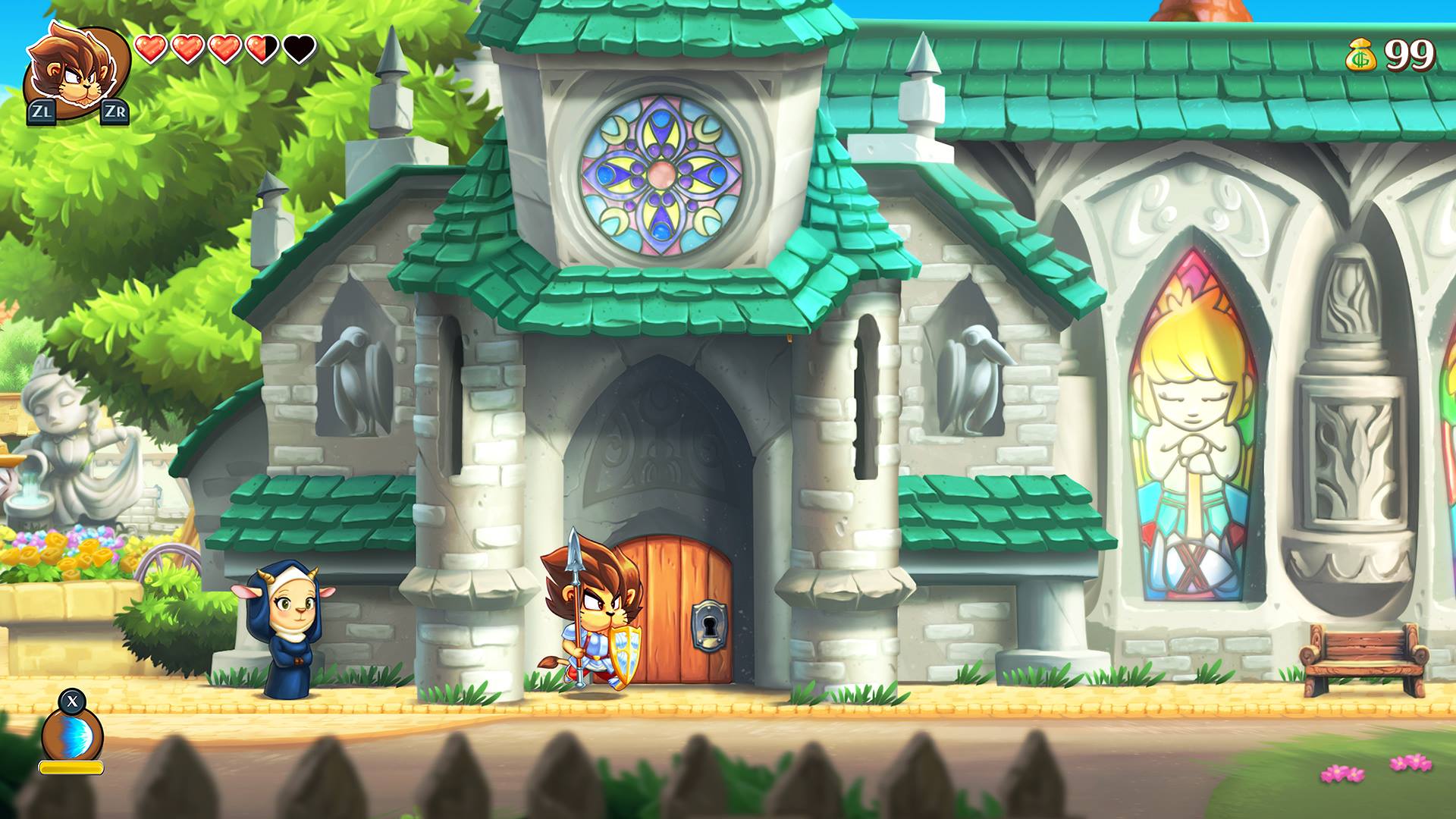 On the audio side of things, Monster Boy is no slouch here either. Managing to channel aspects of the Wonder Boy soundtracks and spin them in it’s own unique way the team behind Monster Boy have created some of the most fun & infectious in game music I have heard in a long while. It’s a beautiful mix of orchestrated work with aspects of various genres including metal in, I don’t usually share music but just listen to the final boss battle score and tell me that this doesn’t stir anything in you.

If you have never played Wonder Boy before or even a Metroidvania style title, it boils down to being an adventure platformer in which you acquire new items or abilities which gain you passage to further areas of a giant spralling world, lots of exploration, lots of room for experimentation and plenty of adventures wait for you till you see the credits role.

As you progress in the adventure you find many beasties to do battle with, some brilliantly constructed platforming sections, areas you’ll want to revisit and some of the mostly pleasantly 90’s boss battles around. There are also plenty of puzzles for you to get your noggin around, nothing far too perplexing but some may have you scratching your head.

As you progress through the story you get access to various spells such as fireballs and lightning and each of your animal transformations, this gives you access to everyone of your skills at the touch of a button giving you total freedom of how you want to tackle the world and how best to use your new found powers, for example the Pig can smell out secrets and the Snake can cling to certain walls and crawl through much smaller spaces than other transformations.

There are shops where you can buy potions, armour and weapons from and the game also has a healthy amount of checkpoints and fast travel locations which help alleviate some of the old school grievances I had with the Wonder Boy remake. 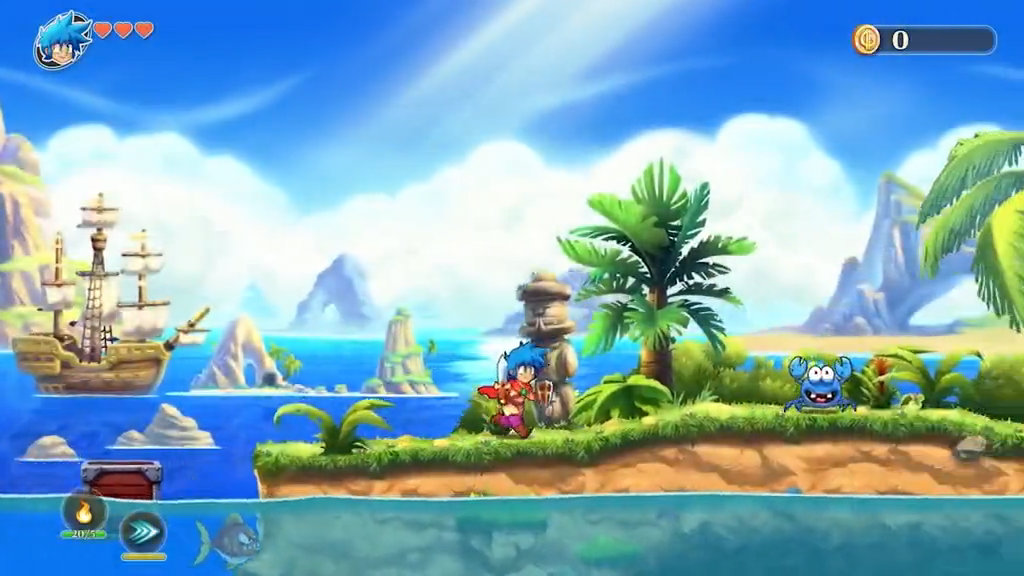 Overall Monster Boy & The Cursed Kingdom is everything I could of wanted from a new Wonder Boy game, crisp visuals, intuitive controls and a soundtrack to die for. The game doesn’t overstay its welcome and the world is an amazing amount of fun to explore and find each and every one of it’s many secrets and easter eggs. It’s beautiful mix of old school gameplay with new school ideas, it’s highly recommended and the team behind the game should be proud of what they have created, Monster Boy easily deserves to be up there with the greats like Mega Man, Shovel Knight, Metroid & Wonder Boy. Bravo!.