Housemarque is a name that any Playstation fan will know and they are responsible for some of the best twin stick shoot’em ups available on the entire Playstation family. It is a genre they have perfected and they always produce games with incredibly high polish. Shoot Em Ups are great games to pick up and play during any down time from your current ‘major’ game but a lot of the time you will find yourself captivated by the gameplay along with the one weakness most gamers have – ‘I’ll just have one more go’. As gamers we all know that is a lie and before you know it the sun is rising bringing in a new morning.

On the flip side though, there are some that just lack that something that draws yourself in so, does Nex have that something or have Housemarque finally ran out of steam? Let’s find out. 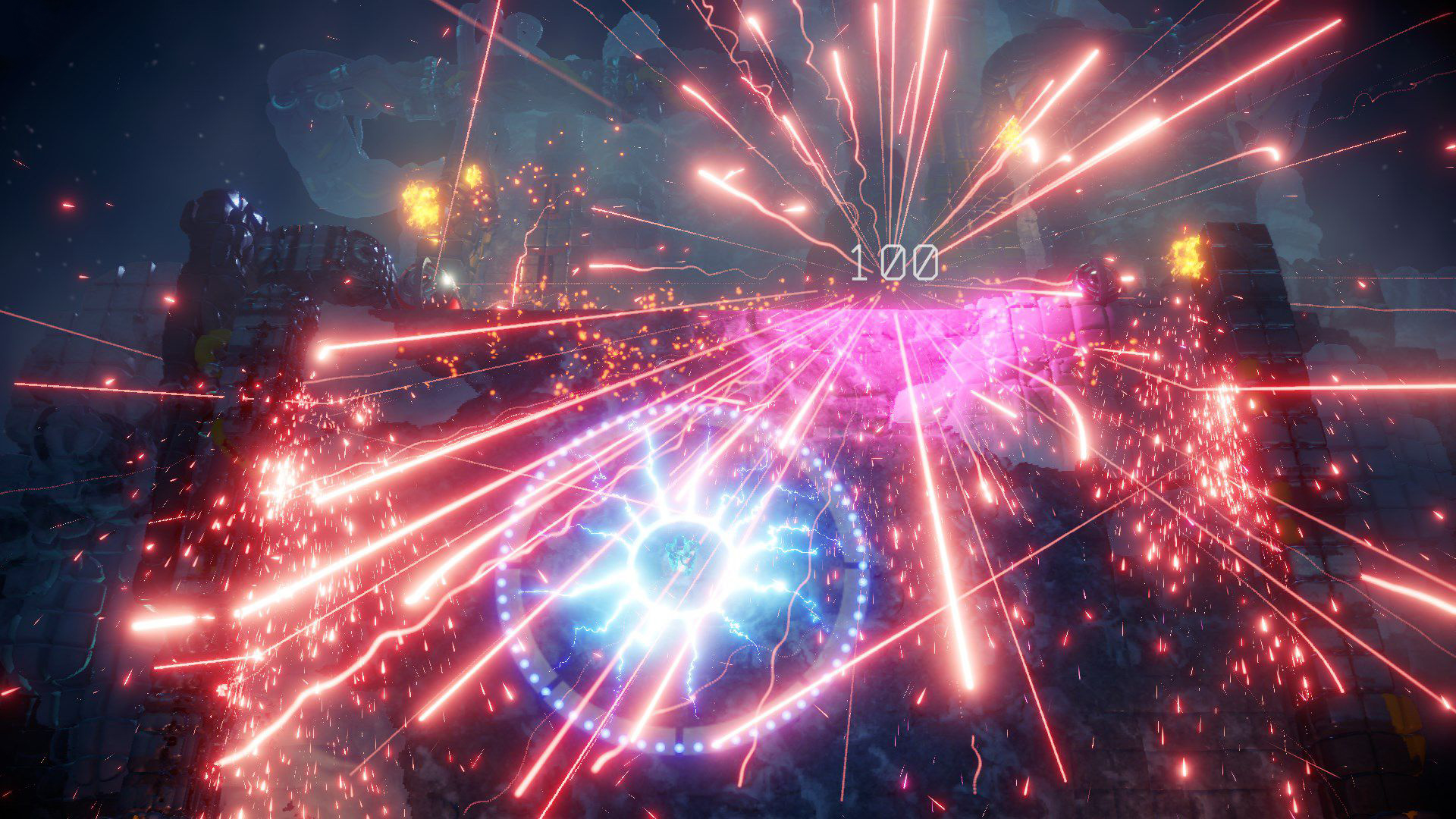 Nex Machina is set in an alternate universe where robots have taken over and humans have an unhealthy symbiosis with their screened devices. Each world you enter us split into multiple stages that act like rooms. To conquer the stage you must defeat all the enemies it throws at you. Simple on paper but once you see what gets thrown at you, you will quickly change your view on that.

It blends the challenge of the arcade cabinet with modern systems that have already been on display in games like Resogun. It is fast, intense and gets your heart beating every second you play. You face waves upon waves of robots as battle through the multiple stages laid out in front of you. Just like previous games from Housemarque, Nex Machina requires you to be constantly moving. Stay still and you will die within seconds. Luckily, this is the core of the gameplay and I found that the movement around the stages is just perfect. Fluid, instant reaction movement that is enhanced by the ability to dash around (or through enemies) and smooth gun play. This is the full package when it comes to shoot em ups and it never slows down. You feel the game getting faster and faster as you move through each stage, testing your reactions and seeing if you can keep up with the stunning light show as enemies explode into voxels upon defeat. 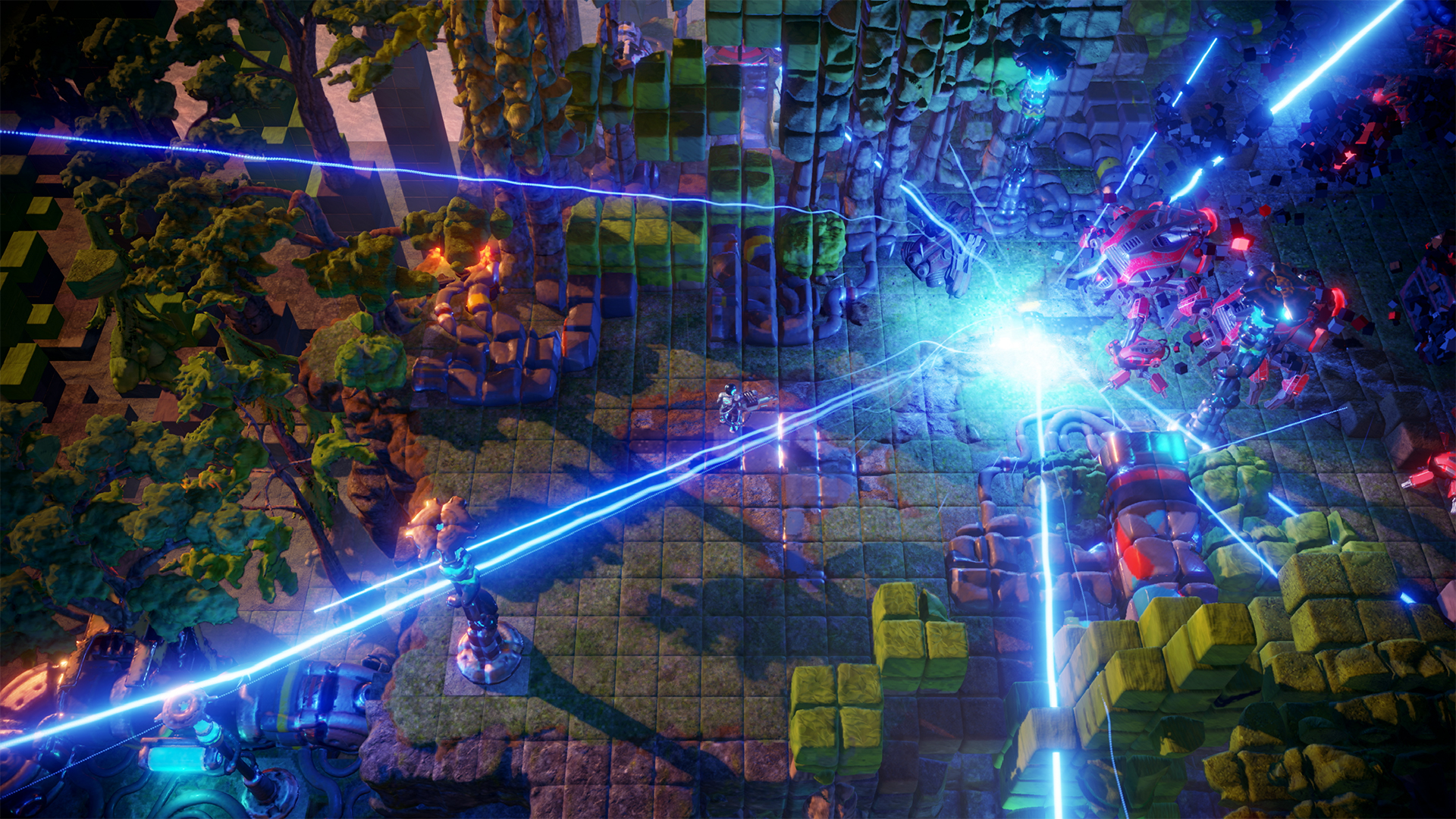 You are armed with a rapid firing gun that fires in single bursts. This is fine at the start but as enemies start becoming harder and greater in numbers you will need more. Luckily you can pick up upgrades that increase fire rate or distance and power ups are available which include a rocket launcher, a sword and triple dashing. All very useful but if you die you will loose everything you picked up. This will force you to be extra vigilant when playing but trust me, you will loose focus for a second and end up like the robots you are trying to defeat. Yes, the game is very challenging but with practice you will get better and start performing some spectacular movements just to survive. If surviving each level was not enough of a challenge, you can attempt to rescue all humans within a stage. Simply cross through them to pick them up but there is a catch. There are certain robots that collect the humans and if they succeed you will loose that said human. It is only worth points at the end of the day but if you are a completionist you may feel the need to save them all.

At the end of each world you are faced with a boss and these are not easy. They test all your skills and patience as they fire everything at you. The screen is filled with bright glowing Projectiles that you become lost in. Working out where you are and if you are actually hitting the boss is very difficult to manage whilst weaving in and out of certain doom. You will die a lot and if you can accept that early on you should have no trouble. And if you are really struggling you can play locally with a friend to bring twice the amount of pain to the robots.

As well as the main campaign found in the Arcade mode, Nex Machina offers a challenge mode in Arena which allows you to return to locations that offer a different experience with faster speeds and other modifications. You only have one 1 reply in this mode (compared to the 99 in the arcade) so once this has been exhausted, the challenge is over. Completing the challenge will reward you with coins that can be exchanged for customisation items.

Nex Machina is visually stunning and with HDR support, the colours pop out of the screen offering a rich experience that is fully shown off with all the voxel explosions. The overall design of Nex Machina has managed to capture everything that was dreamed futuristic in the 80’s. The Neon colour palette is spot on and the synth pop soundtrack is perfect for the gameplay. It has a best that keeps on going, pushing you through each stage.

Nex Machina has managed to blend arcade cabinet style gameplay with modern styles perfectly. Every action you take is a risk and if it doesn’t pay off you are back to the start. I did find this slightly infuriating to start with but it just changes the way in which you play. As gamers we now take more risks as we are presented with generous checkpoints and unlimited life’s but Nex Machina strips this away and success all depends on the true skill of the player. 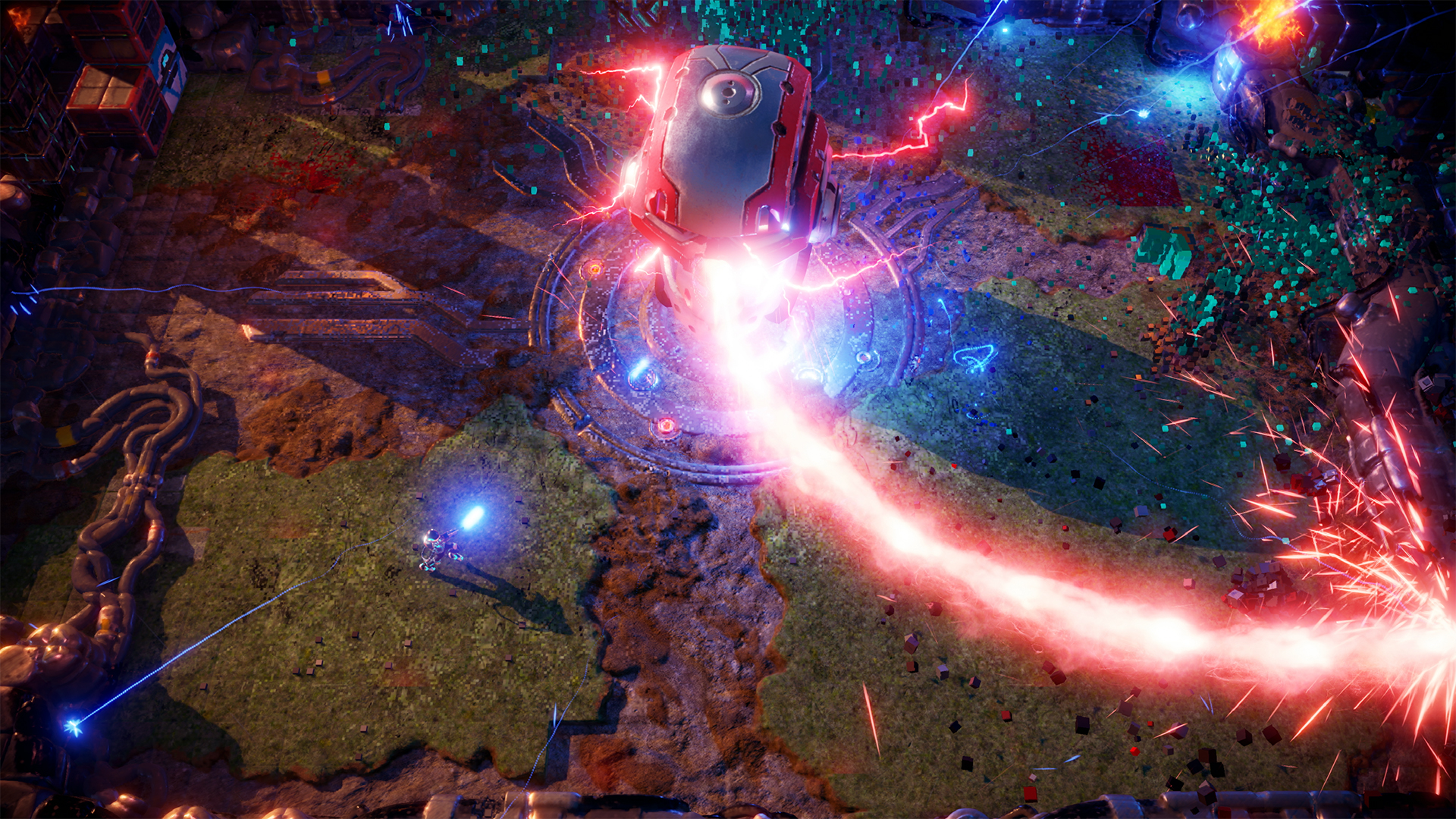