Caligula effect is a turn based RPG with a mild dash of tactical elements thrown in for good measure. Developed by Aquire and published during may 2017 by Atlus USA in both North America and Europe. It was written by Tadashi Satomi, who worked on the first 3 Persona titles, and directed by Takuya Yamanaka with artwork from Oguchi. Is it any good? Lets find out.. 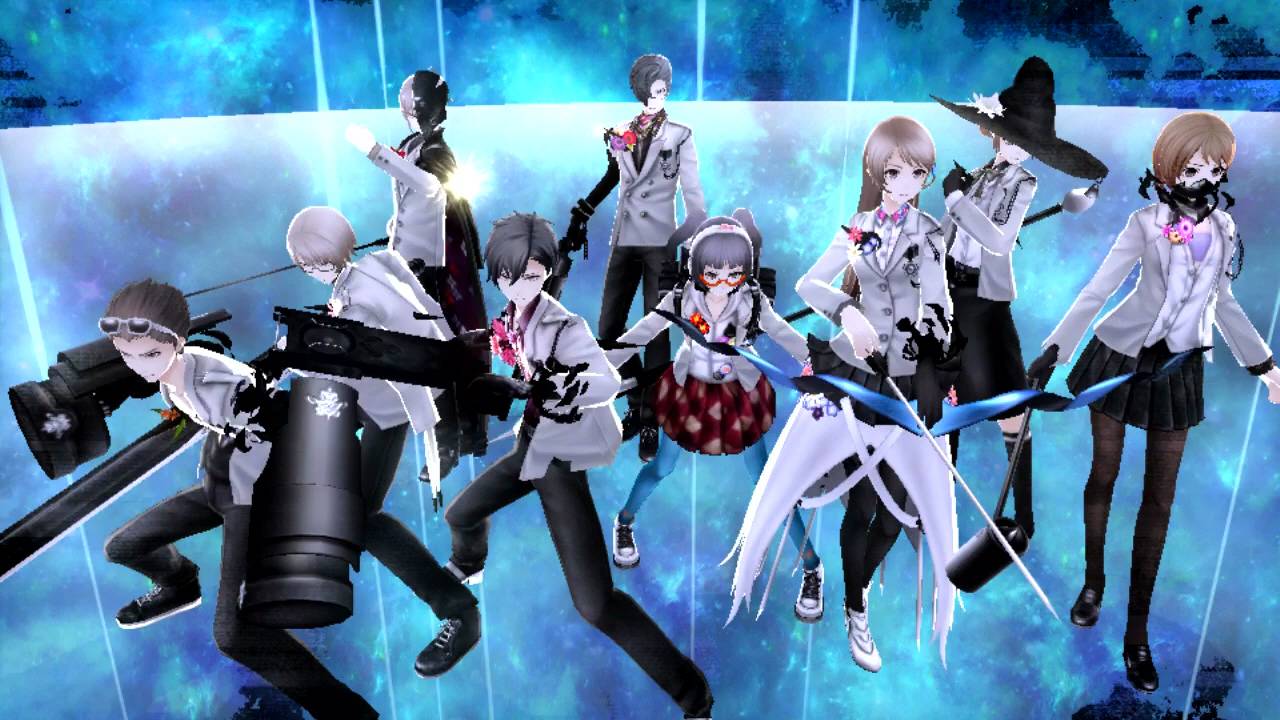 Set in the seemingly Utopian world of Mobius where people from all walks of life reside, living their high school years in bliss over and over in a attempt to escape the pain and suffering of the real world whilst receiving basically anything they wish. The creator of this world a virtual doll by the name of μ (pronounced Mu) who becomes worshiped as an idol. Her songs ease the stress and hatred of the worlds residents as they live on unaware that everything around them is fake. That is until our protagonist starts to see the world around him as it really is, and upon having a clearly unsettling panic attack in front of the whole school, takes off in an attempt to return to his real life.

The initial 10 minutes of the game had me hooked with both the story and gameplay, yet sadly the former became rather unoriginal. While that does not necessarily mean its bad, it managed to be somewhat predictable and repetitive throughout. you are conveniently handed the information to where the boss is go to there area get to the end of that area beat them and gain a party member along the way and receive often weird and minimal character development only to rinse and repeat. At one point i was ready to just can it and simply move on when everything decided to do a total U-turn on me. Whilst the games premise remained largely unchanged, the story itself began to grip me once more and I began to actually feel for and understand this group of misfits. This installed in me to bust open this world and save them all from totally happiness and everything they want all while remaining young …. Wait what ? …. Are we the bad guys? Que Caligula effect 2: The existential crisis 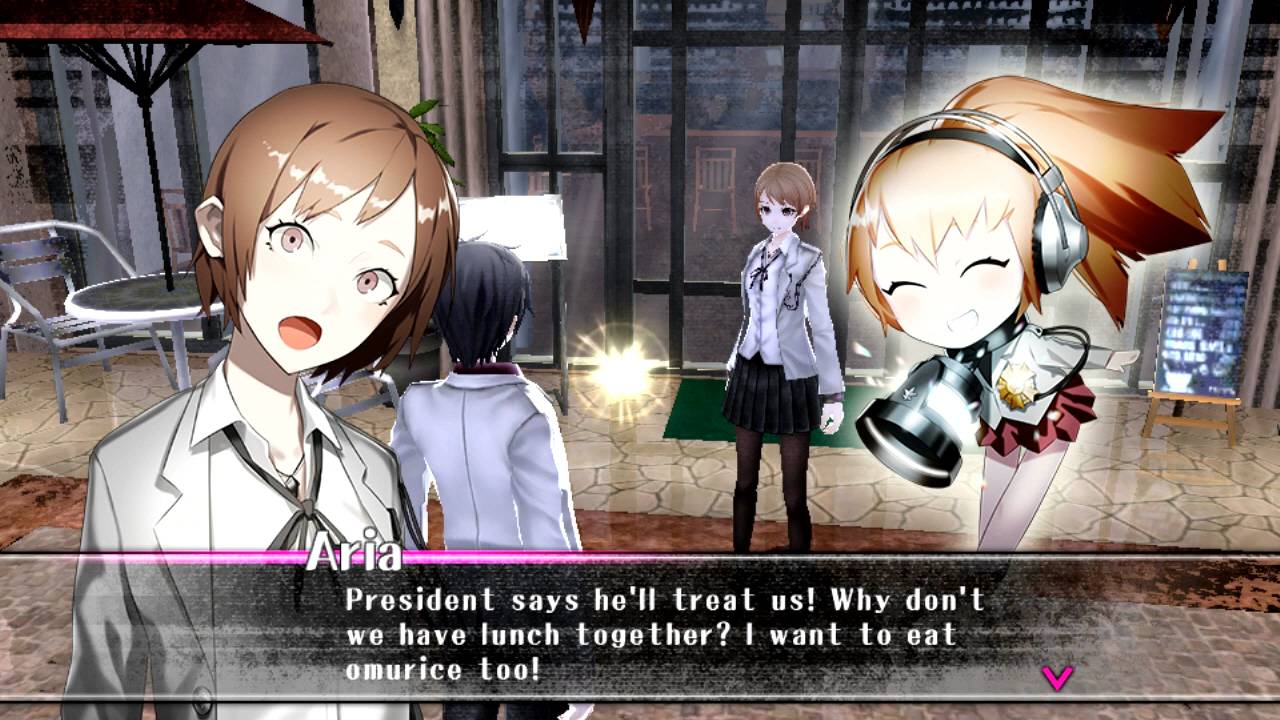 Graphically the game is fortunate to have released on PSVita, if it was on Playstation 4 I would be unimpressed. It looks as though it was built to rival PSP sword art online by the team that created sword art online, using assets from sword art online. That isn’t to say its done poorly or its not good aesthetically, I was a huge fan of the earliest SAO and its successors, but when everything from the equipment acquisition boxes to the skill thumbnails and even the affinity progress bar and accompanying music notes looks almost like a clone. I have to admit to it feeling like a love child of Persona and SAO and lacking its own identifying qualities. As I have stated this is not so much a bad thing just seemingly unoriginal.

Moving on to the audio now and from a title that sees you beating idols and musicians, its hard to not imagine this being close to perfect. Fortunately, it delivers in spades with Japanese voice acting and a varied set of BGM, complete with lyrics, that I enjoyed as much as the game itself. 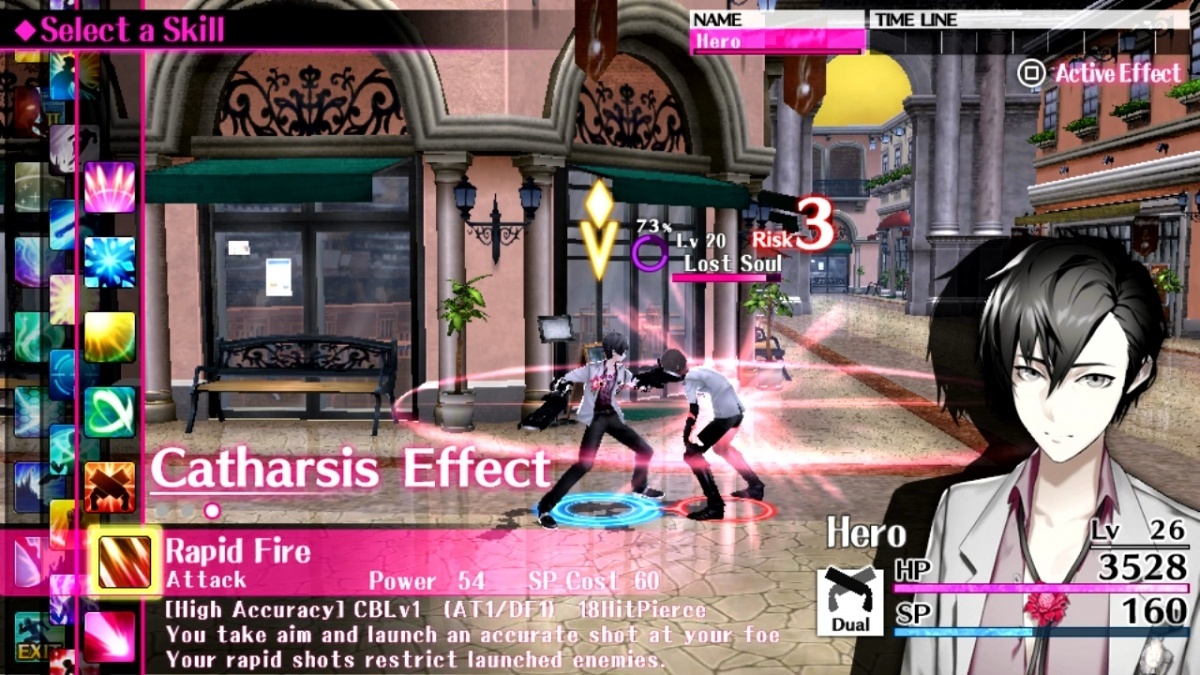 As stated above, fortunately this game is not a graphic novel or I likely wouldn’t have made it past the half way point. That brings me onto the combat, and I have to admit I fell in love with it from the off. Its both effective and interesting, yet so simple to use well enough to finish the game – yet true mastery will make you unstoppable. Utilising your emotions, your party will be able to summon weapons from thier own hearts and desires to fight through the hordes of enemies that lay before you. The combat relies on a turn based battle system with a little twist, as after selecting the attack you wish to preform you will see the possible way this attack will play out before confirming you want to take that course of action. However, you can adjust the timing of the attack and chain up to two additional ability’s for each of your party. This allows for some interesting battles using your different skills to counter, hit downed or airborne enemies and combo your attacks with another party member (for instance you could use the MC to counter a foes strike 3 seconds after your turn comes around this will case them to be launched so you couple it with your aerial attack allowing you to juggle them and inflict extra damage only to chain with your next member to do the same again) Utilising the system in this way allows you to counter or continue chains as long as you have SP, allowing you to overwhelm foes.

With all that said you would be forgiven in thinking that your just a little OP, however your not quite so lucky. First off, these battles take place wherever the digihead that notices you grabs you. This can lead not only to the environment being a hindrance, such as a desk or a wall effectively destroying your planed attack, there is also the fact that the world around you goes on as normal – meaning other students or foes may enter the fray and interrupt your attack. whilst the former stand around like they’re watching a school yard fist fight, they seem to occasionally chuck you a heal though, the latter however can join their friends in trying to take you down – meaning a fight with a single foe will quickly see you outnumbered. And if that wasn’t perilous enough there is the bane of my existence – NM’s. These demons are usually between 10 and 30 levels higher than you, and just off the beaten path, making exploration deadly. I cant count the times I blitzed through wave after wave only to take a right instead of a left and come face to face with a level 50, leaving me to weep as my party in the low 20s got destroyed resulting in game over. However that’s all you have to deal with for challenges right ? Welllll Nope! To add insult to injury the title has no items, at least in terms of consumables, so healing is limited to both your medic and their remaining SP – making tactics even more vital to even the most simple of fights. With all this said, yes the game will punish you, but it rarely feels unfair. You were the one that explored the area your not ready for. You got close to that school kid with giant cannons, a shield and a lance. You got caught up in a fight with around 10 other enemies. To be totally fair sticking to the beaten track I do not recall ever needing to heal and the bosses were even easier than the trash mobs to be honest.

Up next I have to address something that had put me off with this title, and that’s the social system. I honestly cant decide on what side of the fence I stand. Its basically a fusion of Personas social links and Sword Art Online: Hollow Fragment’s social interactions (only with much better spelling). On one hand its about as basic as you can get, and on the other there are over 500 potential relationships/party members. Sure, having a social system that gets extra party members (who can be better than the main party as pointed out by the game), get quests and rewards –  but 500 plus ? Can you imagine having to max 500 full sized social links, never mind writing that much dialog. I mean with the current system you talk to someone 5-6 times and get a line of dialog or two along the lines of “hey listen” “oh its you” and it goes up a rank. I got board of it after around 50, another 450 of that? Ill pass thanks.

I will say for the main cast its ever so slightly more refined, as after the idle chatting you can get an event depending on how close you are and the story progression. These events touch on their past and the pain they ran from in the real world. While a nice touch, it was unbearable at first and only after I hit rank 5-6 did I actually get invested in their stories and feel like they weren’t simply tacked on NPC’s – but humans for a game all about emotions and feelings. I’m glad that they were able to convey that, even if it did take a while to get there. 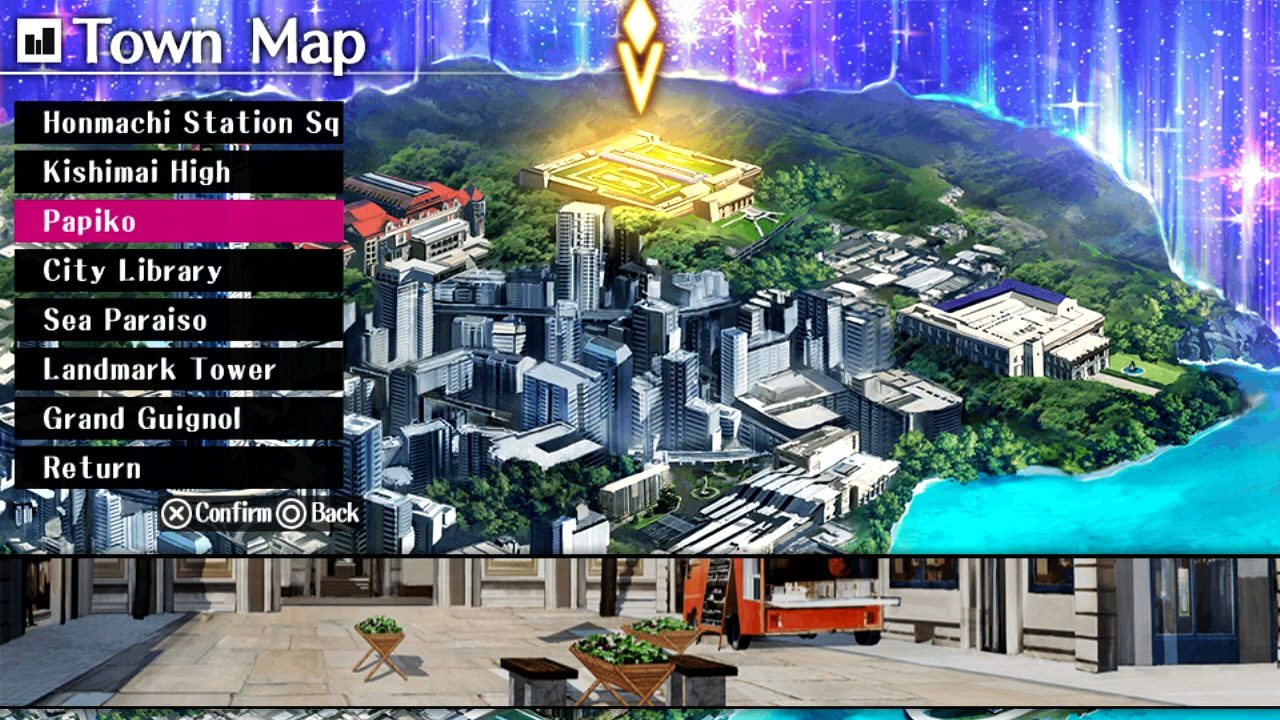 To sum up my time with Caligula effect, I’d have to say despite its slow start the writing eventually come good and the combat managed to keep me playing until it did. Upon reaching that stage its easy to become invested in the cast and story, however, getting there will see a fair amount of the same old same old. It is though relatively easy to just simply zone out and battle through your foes while humming along to the BGM. Whilst its not quite perfect, it does offer some enjoyment and fans of both Persona and Sword Art Online shouldn’t feel to0 far out of their comfort zone.