Last year we seen a release that seemed to infuriate some members of the gaming press due to the games jiggling boobs – Senran Kagura: Burst. It was a surprising release for the 3DS for sure, but for everyone else that gave it a try, the game was a fairly enjoyable brawler with a fun cast & frantic combat. The game must have done a nice bit of business for XSEED & Marvelous as we now have the games sequel, Senran Kagura 2 Deep Crimson, landing on our shores. Interested in reading a review that discusses the game & not the jiggling? Then read on! 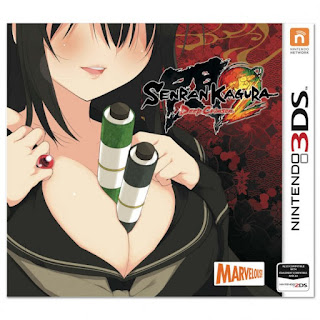 The story for Senran Kagura 2 picks up from where Burst left off. The first chapter see’s you taking control of the Hanzo girls as the game recaps the fall of Hebijo, with this acting as a prologue for what is to come. Homura’s Crimson Squad, as the Hebijo girls are now known due to becoming renegades, are the focus of the next few chapters. It doesn’t take long for a few new characters & deadly foes to enter the mix, who all fit into the games narrative without seeming out of place. Just as with Burst, the writing is good. Its all a little more light hearted than before, probably due to not having to set up the girls backstories this time, but that still doesn’t stop it from having more serious moments when its needed. Once your finished with the story, there’s a few other modes to play that will give you extra unlocks over what is earned during the story mode. Yomi’s Nest can be a real time-sink. 17 floors and over 150 stages are arranged in a pyramid that will take more than a few playthroughs to fully conquer, each stage is usually short though and will see you defeating a set number of enemies to get to the next floor. Fighting to the bottom will see rewards and XP boosts, whilst failing will see your earned Mission mode tasks you with completing missions a certain way (only airborne attacks do damage for example), with the training field offering a place for you to hone you skills and become more familiar with how the games numerous characters play. A great aspect of all these modes is that levelling carries over, even to online & local coop, so you can continue ranking up your favourite character no matter what you do. There’s also a huge amount of unlockable items, clothing, weapons etc from each mode as well, with the games dressing room allowing you to fully customise the outlook of your characters – a photo mode is also included in case you wanna take snapshots of your gal. There’s definitely plenty to get through, the difficulty you play at could see the story mode last about 6 hours or so on its own, and the bountiful amount of unlocks always leaves you feeling rewarded no matter what your doing on the game. 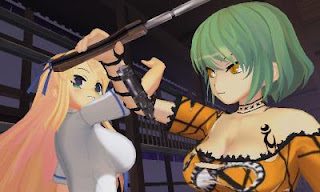 Co-op is a big addition for this release, something that was sorely missed from Burst. The game doesn’t offer up the mode until you’ve reached a certain point in the games story mode (halfway through Chapter 2) and pretty much has any mission & character you’ve unlocked to that point available to play then. A decent enough connection will ensure things go well of course, everything seemed to be handled well enough during testing, which was impressive given the speed the game can hit when in full flow. But! The search function for games is a little poorly executed. You can search for any mission, but the difficulty, skill level etc all has to be set and searched for specifically. This specific searching can make finding any game at all to join a little difficult. A patch down the line could add an ‘Any’ search option to those specific areas to make things easier, but as it stands right now great performance is marred by a somewhat poor execution when searching for games. 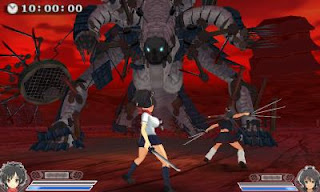 Fans of Burst will feel right at home once the fighting starts and those fond of Shinovi Versus will find much to enjoy as well. Stages are a mix of the side scrolling originals & the Vita’s arena’s, which helps ease repetition and keep things fresh. Combat is fast & fluid, the developers refining the formula rather than reinventing it, with a few minor changes over Burst. Controls are pretty much identical, with the changes tending to come with the characters move sets (available combo’s & a brief description of the characters fighting style is offered on the bottom screen) Mirai for example doesn’t have a heavy attack like most of the cast, instead that button is used to switch between weapons which changes her fighting style drastically. Tamsoft seem to have gone to great lengths to make each character feel unique. Special moves also vary in range, area and damage between the girls (each girl now has a few special moves) as the game continues the use of scrolls in deciding whether you can transform & which special attacks are available to use. All your scrolls can now be used to initiate a frenzy, your character sheds their clothes and boosts attack at the expense of defence with infinite scrolls giving you as many special attacks as you can use in a limited time. The orochi boss battles freshen up the campaign a little too as they require a different way of playing due to soaking a lot of damage & packing a punch in attack. Chapter 2 of the campaign, just after your first Orochi battle, opens up the games team based combat. Some missions will now see you paired up, with a press of the A button switching between the two. The AI does a decent enough job when your not in control, but you still have to be mindful of their situation as the AI doesn’t seem to use scrolls or transform. If there is one downer it’s that camera control is only available with a CPP, but then the game plays fine enough without one and you’ll still be able keep up with your foes. All in all, Deep Crimson is an amalgamation of Burst & Shinovi Versus which has seen the formula refined almost as much as it can be, which now finds itself amongst the best brawlers for handheld gamers. 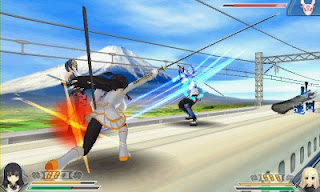 Graphically things have seen quite a sizable improvement over the previous 3DS release in numerous areas. Character models are well detailed with some great texture work, individual animation sets for each character shows just how much care the developers have put into the cast and the effects, animations etc of the games transformations & special attacks adds even more to each girls unique flavour (Mirai’s flat chestedness means her transformation is humorously goofy) The levels/stages have also seen an improvement, almost bringing them close to the offerings on PSVita visually – which is some achievement for the 3DS. It wouldn’t surprise me if some assets are even shared. All of this is helped by the game being fully playable in 3D. It’s no longer only active during transformations & specials, something I’m glad about, and looks great throughout. The dialogue sections don’t quite pop as much as Burst did though, but there’s an appreciable amount of depth & pop elsewhere. When the 3D is deactivated the game still manages to look good, even on my 3DS XL. Optimising the game for full 3D compatibility has seen an improvement in an area everyone will appreciate: framerate. Burst would occasionally get frisky, but Deep Crimson holds things together admirably in this department. Sure, there’s still the odd little stutter, mainly during 3D use – but most of the time it’ll go unnoticed during combat. Audibly its a match for the rest of the series,uplifting samurai style pop tunes & great voice acting keep up with the rest of the production. The games impressive overall presentation means there’s more for you to gaze at than just the girls jiggling breasts. 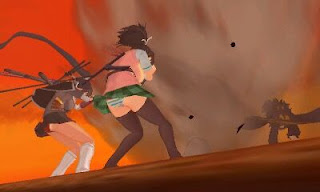 Senran Kagura 2: Deep Crimson is how a sequel should be. Similar but packed with improvements & additions. Aside from the search issues during coop, and maybe there being not as many side-scrolling levels similar to Burst as hoped, everything else has seen an improvement. The co-op works great, the story is good fun, additions & refinements to combat are welcomed, added game modes means more to do, hefty amount of unlocks keep you rewarded, full 3D support & improved framerate over Burst, and so on. It’s one of the finest brawler on the 3DS, which only those with a dislike of Life & Hometown will likely steer clear of.