With the easily accessible tools that allow anyone to create games has come developers trying to recreate genres from their childhood.  The side scrolling beat em up genre has been around for many years now and has proven successful both in the arcade and in the home.  It is a genre I feel that does not suffer from the nostalgia filter.  You recall the fun you had with them more than gameplay and graphics.Yes those factors to help create a good game but reliving the memories of playing with your friends or siblings is something that is hard to beat.

So what if you want to create a new experience for a new audience?  YOu take everything that made the genre great and package it up in a modern shell.  On paper nothing could go wrong but Zheros proves that some genres may be best left alone. 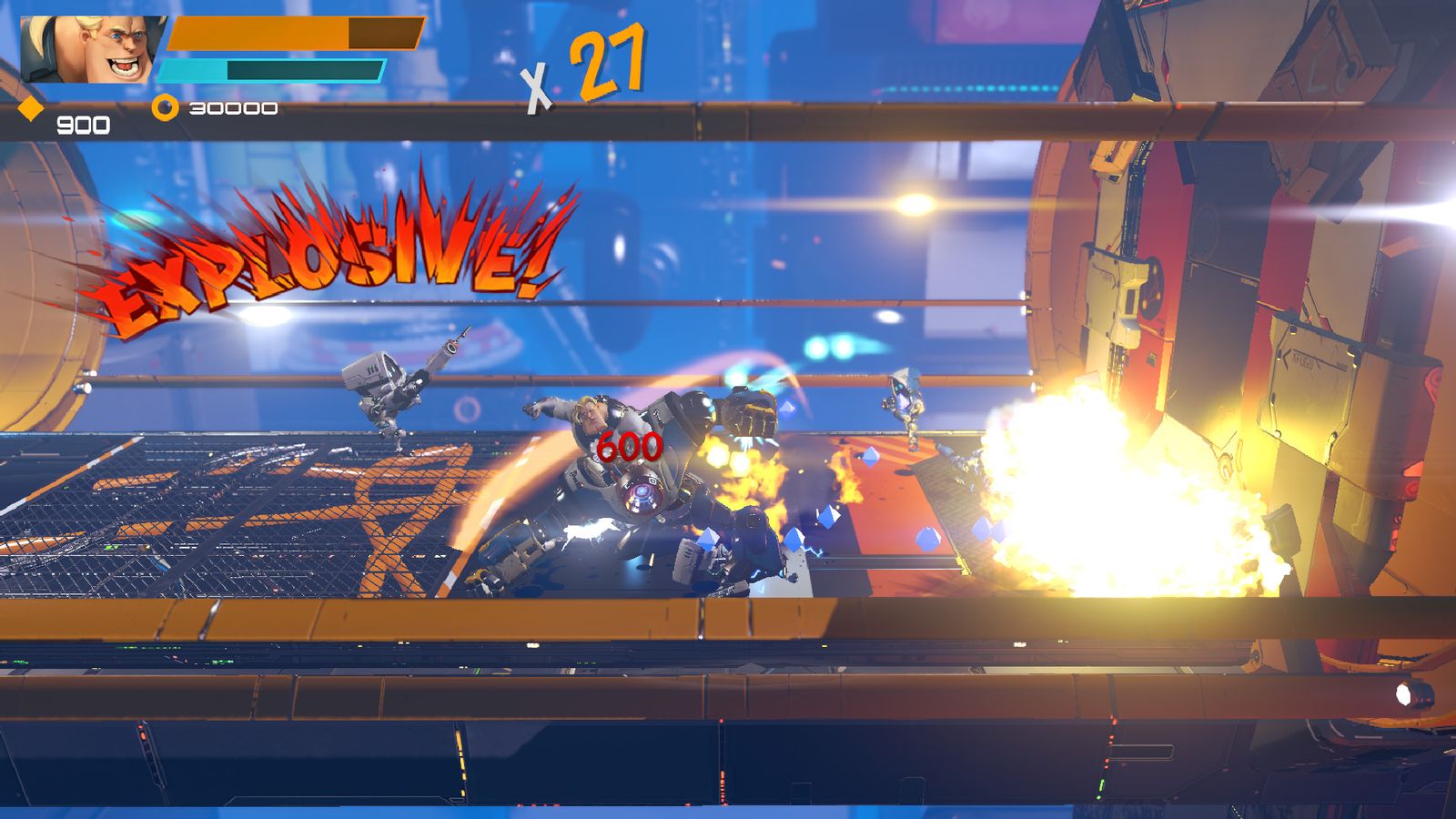 Zheros is a 3D Beat Em Up from developer Rimlight Studios.  It follows the adventures of Mike and Captain Dorian with a simple mission of saving the universe from the evil Dr Vendetta.  The game can be played on your own or with a fellow gaming through couch co-op.  It is nice to see this feature coming back to a lot of games.  Zheros presents you with the ever familiar story but with what it lakes here can it make up for through game play.  In short, no.

Zheros is a bland experience that does not get better as you progress. Stuck in repeating stages you will find yourself running through various empty area fighting the occasionally generic looking enemies. It is a button bashing side scrolling beat em up that trips over before it even begins. It tries too hard to be funny and smart. The overall story is poor and I feel the game knows this as the skip button is always present on every cutscene. Needless to say that button was pressed rather quickly after the first few scenes. It may get better but there is no spoken words in Zheroes so everything is portrayed through character expression and this is equally as bad as the story. They all look like they are in constant pain wishing to be killed swiftly and I can only hope that will happen for both our sakes.

Gameplay is what you would expect from a beat em up; you run, jump and attack your way to the right. You can perform combos based upon weak and strong attacks mixed with a gun that runs out of power very quickly. To be fair though, it is very over powder so needs this balance to make it a little fair. You can dodge and block around the stages but there is a slight delay in all actions making the whole game feel sluggish. It suits the male character as he is a meathead but it hinders the overall experience as you are having to predict enemy movements before you attack yourself. You can upgrade your character through points you earn in the game and this add extra moves which do have some nice looking animations but I found myself button bashing rather than performing moves and combos. It may just be my personal playstyle but I felt there was no real need to perform the variety of moves. 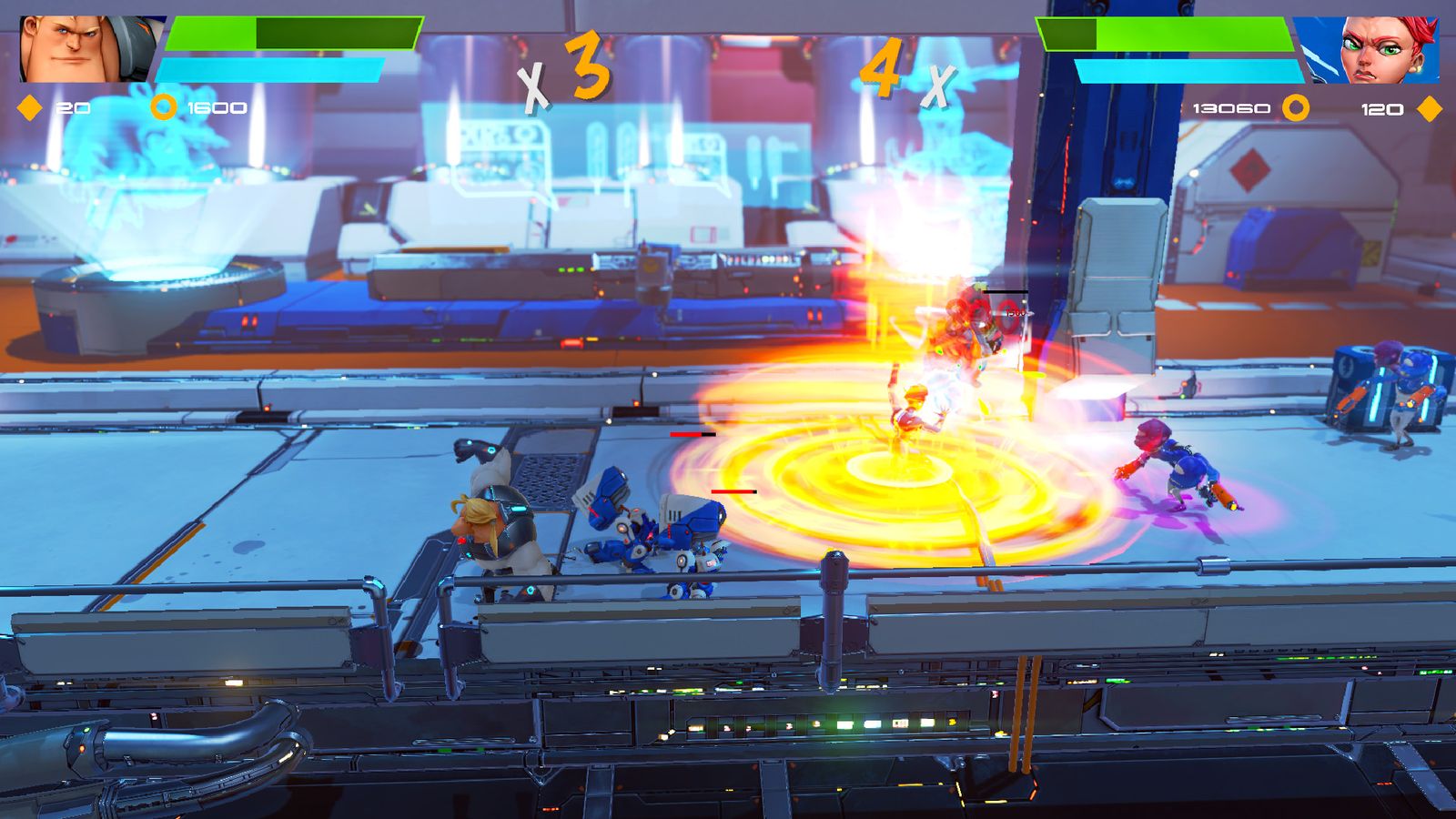 Graphically it is bold and vibrant but that is all that is appealing about it.  The lack of voices and repetitive music just adds to the overall bland feel.

The Forgotten Land DLC does not really add much more to the already disappointing formula other than an extra area and character to play as.  Just like the base game, it is stunning to look at; the world and model details are very high quality but that is pretty much the best thing I can say about it.

There are plenty of great examples of beat em games even from 20 years ago but Zheros is not one of them. The sad thing about this is that it was probably created by a group of developers trying to recreate what makes a beat em up great but failed in every way possible.  My recommendation would be to source out a beat em up from the past and spend your time on that.  Castle Crashers Remastered came out not that long ago and that is a fine example of how to do it right. Sorry Zheros, you will not be saving the universe this time around.