Super Rude Bear Resurrection adds another entry to the forever growing genre of “challenging games”. For me this genre does not suit my play style as I like to feel instant accomplishment so having to repeat a stage over and over does not sound fun to me. I usually avoid them and I do get hit with criticism about it but that is just what I like. I know that once you achieve success after multiple attempts feels great but in a nutshell I am a lazy gamer – give me a set difficulty or a progressive difficulty curve any day. Anyway I am straying away from the topic which is Rude Bear Resurrection and is it any good? Well, even with my dislike towards the genre I did find it enjoyable and this is down to a few unique mechanics that made the experience tolerable. I first laid my eyes on Rude Bear a few years back at EGX and then thought it had potential to become something enjoyable. The fast action helps create a smooth experience that became rather addictive much like Hotline Miami. After that the game went quiet but Fast forward a few years and the game has been resurrected keeping the same addictive gameplay from before with extras that make it difficult to put down. 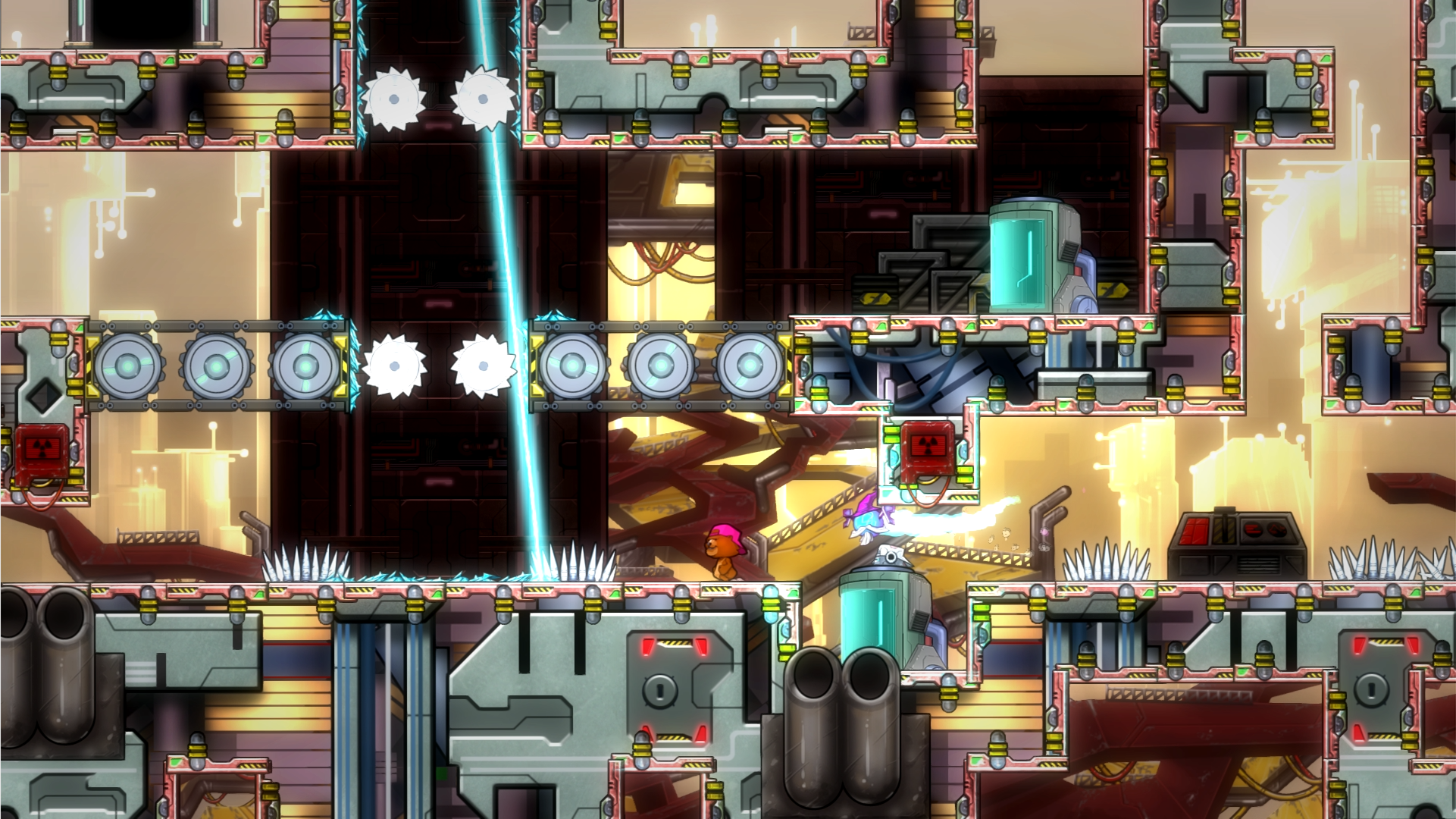 You are introduced to Rude Bear and his floating side kick with the goal of reaching the end of each stage which are full of traps that will result in your death. Never fear though as that is the point of the game – when you die you leave your Corpse behind meaning you can use it as a platform thus making some areas a lot easier. Trial and error goes out of the window here as you can tactically place a body before even attempting the over come a danger. Even better though is that you can guide your sidekick freely around the stage to see what dangers lie ahead. You can easily plan out the stage without moving. But wait doesn’t this make the game stupidly easy? Sometimes is does but it still relies on the skill of the player when making jumps. Pretty much all dangers involve spikes and jumping over tightly stacked pillars can be pretty tricky just as wall jumping between them is difficult too. I would say speedrunners would have no issues as once you get a good rhythm going the spikes will become a blur. It is when you take your time issues will arise as the controls can be slippy that will cause more accidental deaths. 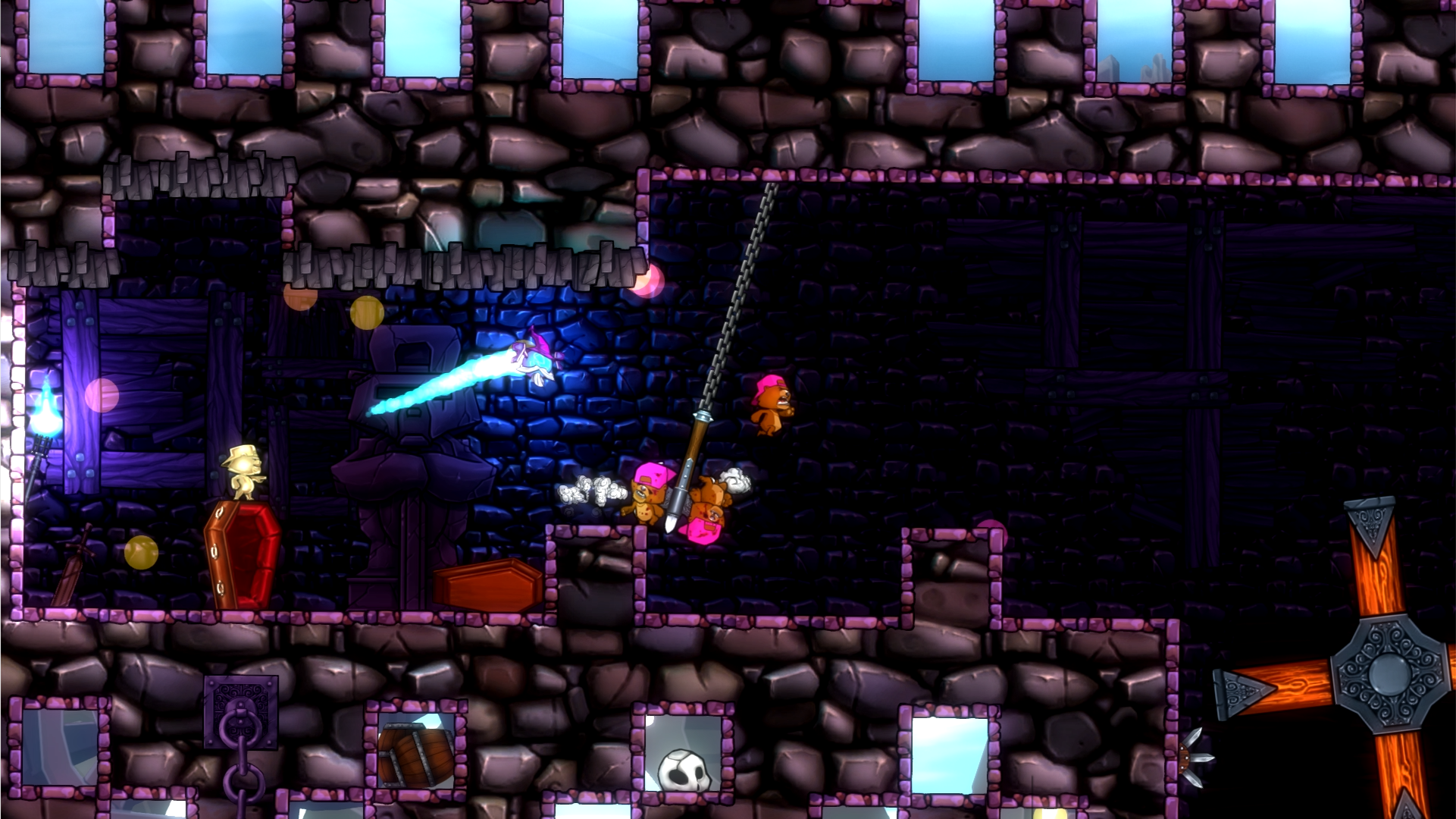 Speed runners will live it but hardcore fans of this genre may find it a little easy thanks to you being able to use your corpses as platforms. For the novice like me you will start of slow but your confidence will build result in more fluid movements. The flip side is that you can become over confident quite easily so expect death after death after death. There will be times when you will be screaming bad words at your TV as you start seeing corpses piling up in one spot (so I would keep young ears away from the TV as you play). Rude Bear knows he will die a lot so the game even keeps count for you so you can see your massacre upon the completion of a stage. I’m surprised it did not question me on why I hate bears so much!  Settings can be changed to make the game harder by turning corpses and check points off but that is not for me.  I am sure there are plenty of gamers who will do this & even if you find that too easy, you can attempt to complete it without dying at all! Only the maddest of players will do that!

Rude Bear Resurrected is a very colourful adventure which contrasts the overall feeling of death around every corner.  Along for the ride is a very heavy beat driven soundtrack that does fade into the background very quickly and adds more depth to the overall game.  If it was silent or contained softer music then I feel the constant deaths would start to annoy you.  It reminds me of arcades and there constant playing of music overhead whilst you play the games.  As mentioned previously the controls can be slippy but this adds a lot to the game and how you play.  Even with this aside, the controls are very responsive giving some ease to the game.

As you see, this genre is not all for me. I do get easily frustrated and will quit before trying again but Rude Bear Resurrection feels different. It is a forgiving experience that allows you to alter the balance of difficulty as you play. Call it cheap and Yes, many (digital) bears died during my review but I can happily say I make progression through the game and I feel good about that. Maybe this is the beginning of a new love for this genre and who knows, I may even finish a Souls game before this generation is up.