Exile’s end is a side scrolling platformer that try’s its best to pay homage to classic metroid-vania style games, developed by Magnetic Realms and published by RPG gods XSEED. Lets see if it can rival the sheer greatness of the classics that we all know and love!

Exile’s end’s story is a simple one. You play as Jameson, an older soldier from Ravenwood military corporation, who appears to have a past that his crew are cautious of. As Jameson you’re tasked with locating the ravenwood presidents son on a mysterious planet. As you get closer to your destination you get shot down and crash-land into the aforementioned planet! With nothing at all apart from your wits. 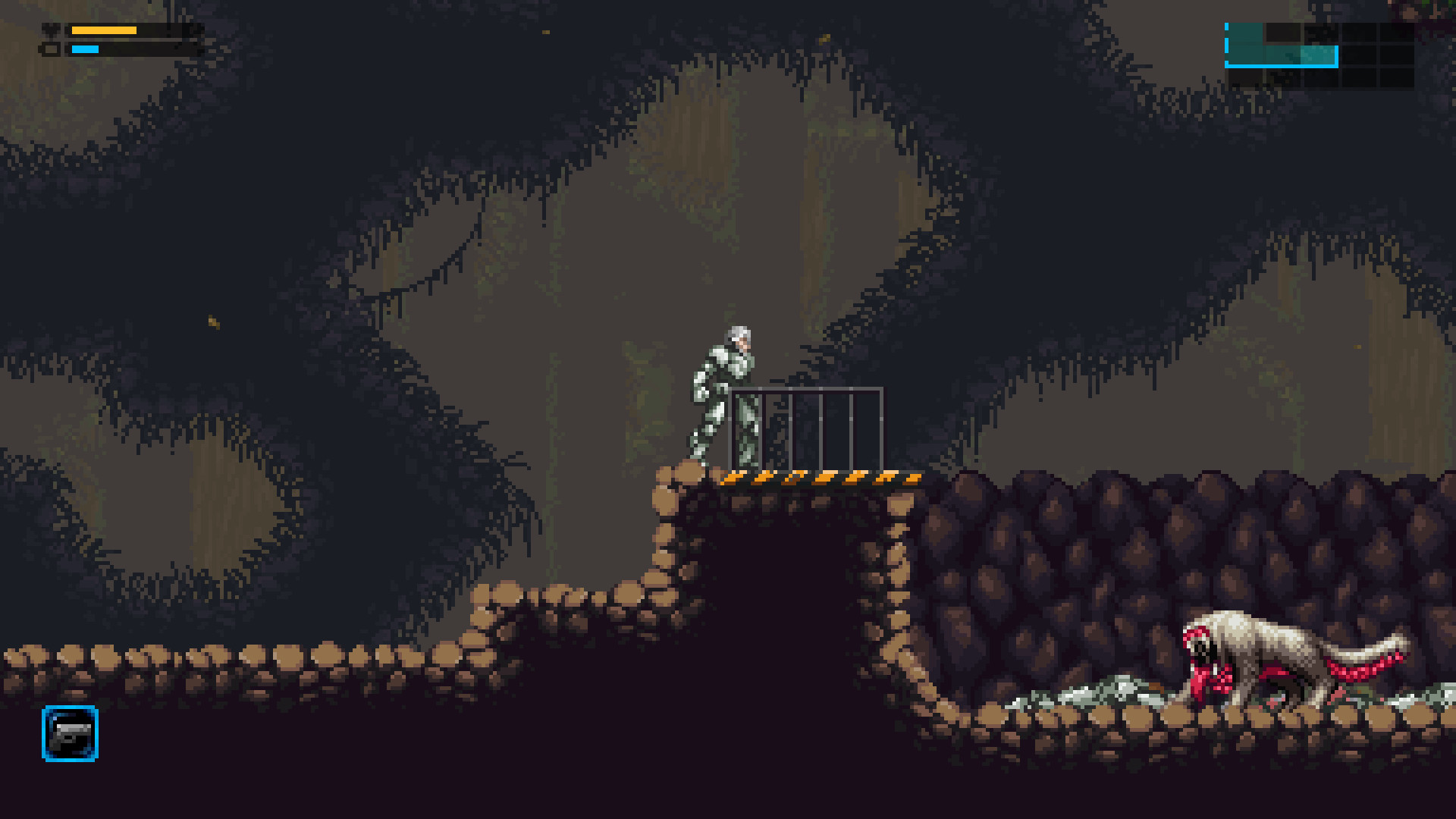 The graphics in this game aren’t the most impressive you’ll see this year. They are simple 16 bit graphics, that in my opinion don’t look great on the PlayStation 4. The cut scenes aren’t all bad, however some of the mobs look a bit strange, but this is down to design as opposed to the graphical style. The backdrops are also nice and provide a decent setting for the levels, but I don’t believe this makes up for the overall poor looking visuals. I think that the graphics may look better on the PlayStation Vita due to the smaller screen size.

The audio is much the same as the graphics. They’re not the best by any means. When you first hear them they sound fresh and exiting and fit well in the game, but after some time they start to get repetitive and boring. Eventually I turned them off and listened to my own music. 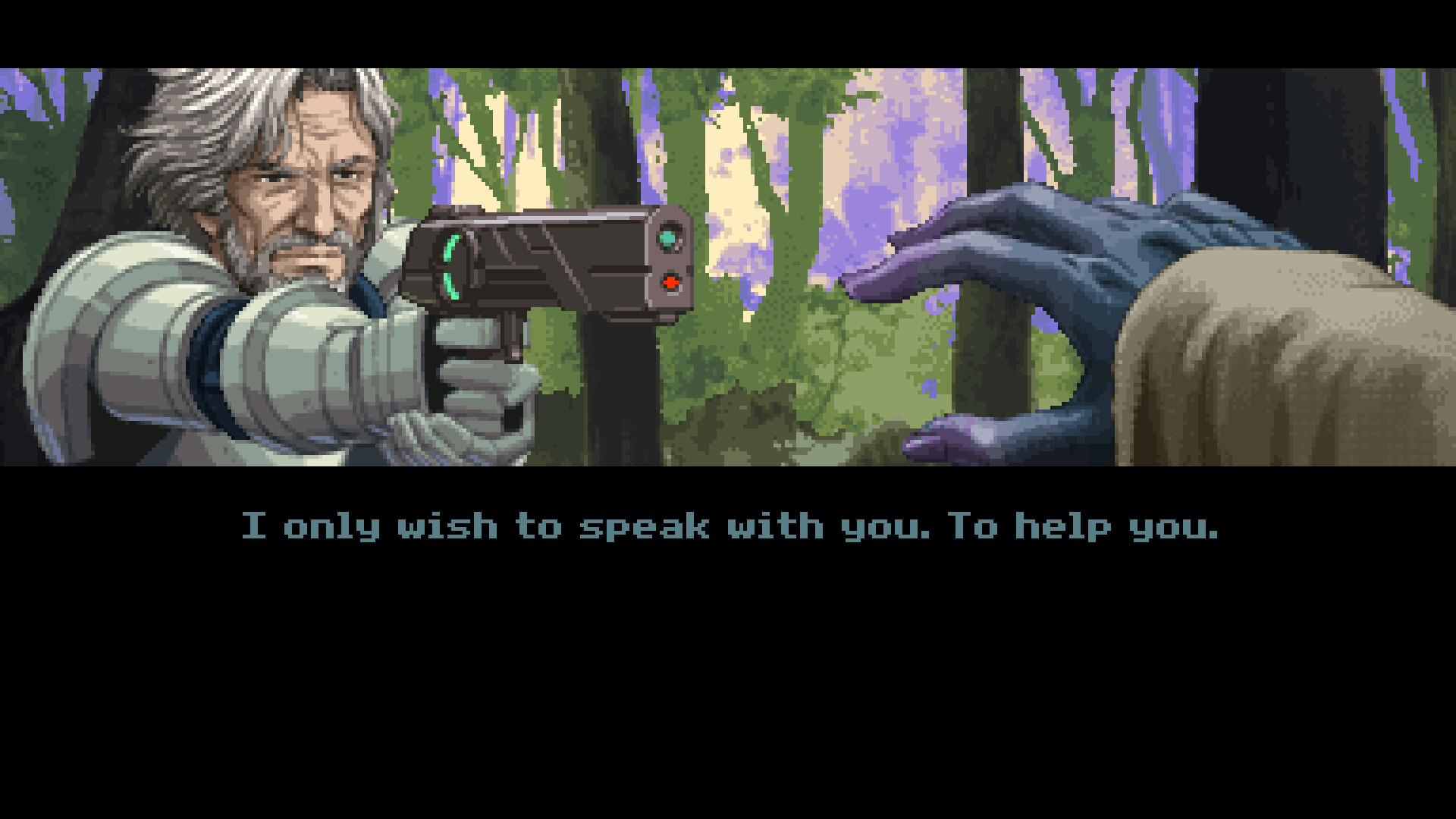 Unfortunately Exile’s end’s Gameplay is no better than the graphics or audio. You start off not knowing where to go and with no explanation of controls and a dreadfully poor over world map. This only adds more frustration to the start of the game as its so easy to die. As you move around the world in a typical platforming fashion your first major obstacle is simply descending, the game gives you no clue on how to look what’s below you, which leaves you guessing if you’re jumping is accurate, which for me it was not, I died around twenty times just trying to get down the first hill. I only found out by accident that to pan down you have to crouch and then hold the analogue stick or D-pad down for little while longer. Once I had this figured out I was ready to crack on with the game! However, not minutes after discovering this I once again got stuck – this time it was opening a door by using an elevated lever. Half an hour later, once I had figured that out I continued, falling, guessing and getting attacked by little worms until i reached the point against my first mob with a weapon that I could take.

This is where it got even more challenging as I only had a sliver of health remaining and you could only kill the guard by luring him to his death! Several hours later I finally had a weapon, after this point the game became more enjoyable as I felt like I had passed all of the major hurdles – the only thing that was wrong with the game now was the fact that drops from enemies were less than few. This crossed with the AutoSaving function of the game made it in to an even bigger nightmare, the AutoSave feature on this game automatically saves every time you enter a new area (as for a metroid-vania style game you can imagine there are a lot of areas) However this felt like more of a burden as when you entered a new area with little to no health and see a pack of mutated dogs running towards you, you literally can’t do anything apart from die. To my dismay I had to restart the game due to this exact problem. 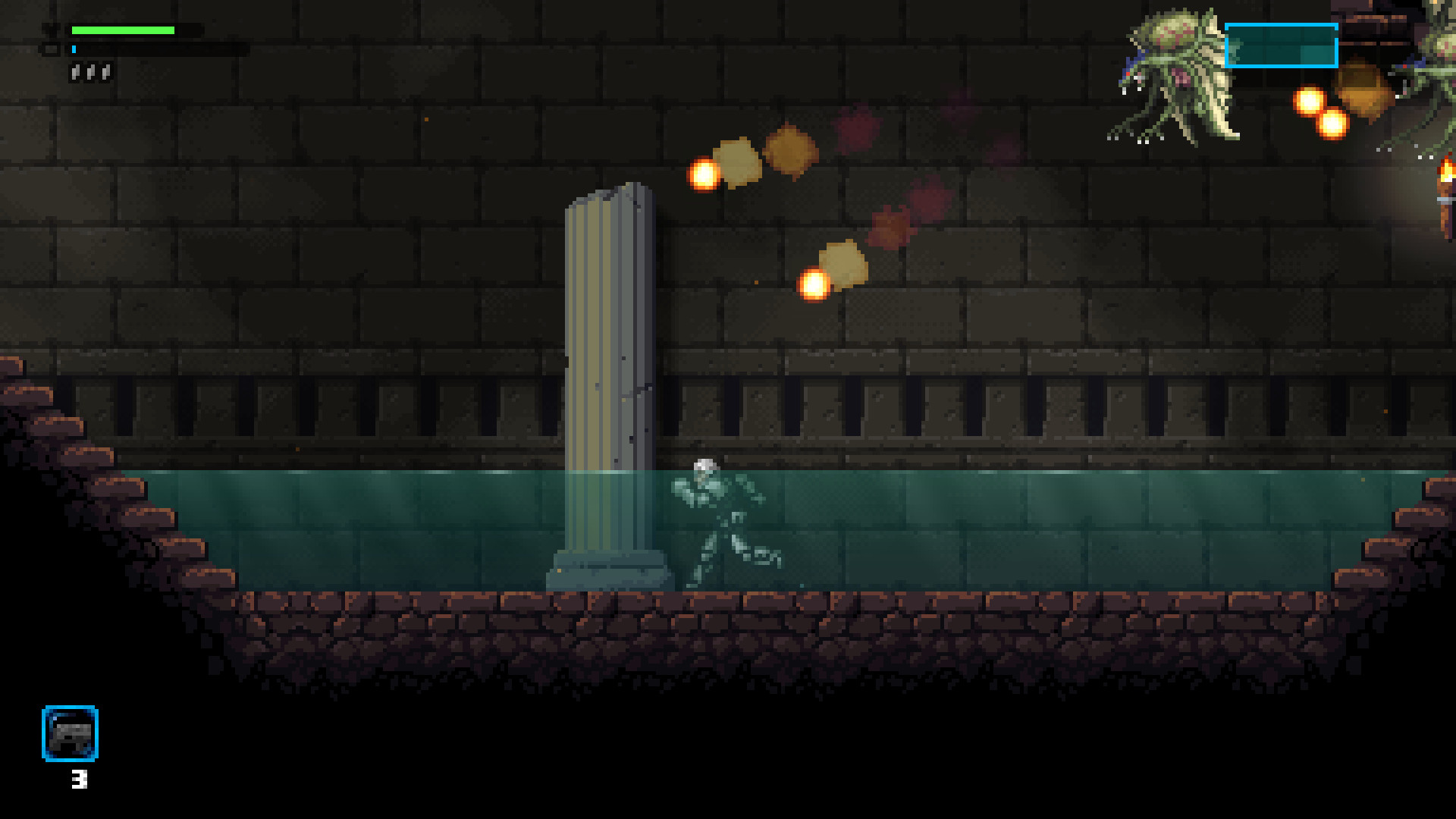 The other mode on this game next to the story is survival. Survival is simple. You get a weapon and have to kill mobs before they kill you or the time runs out. This I felt was the most enjoyable game mode as it threw you right in to the action, however I never got past the first stage due to not being told how. There was also no high score feature so I couldn’t see how bad my scores were! I had a good few tries on survival before I gave up, but the time I spent on that mode was rather fun and with a simple ‘objective’ feature implemented this could be a lot more enticing. I also believe there are two additional modes, hard mode and permadeath mode, that are only available after completing the game.

Overall I am not thrilled with the time I have spent with Exiles End. I definitely think hard-core metroid-vania game fans will love it, but for the average gamer who wants to try out a game like this – it’ll be constant frustration and anger wondering why you keep dying. I think the only reason I’d go back at the moment would be to have another crack at survival mode to see if I can finally clear that first stage!