In the last few years it seems like fighting games have seen somewhat of a resurgence, Blazblue being one of the genre which started out life last gen and is still hanging in there with the big boys of the genre. Through various upgrades and pseudo sequels the game has seen various releases, will the latest release Blazblue: Central Fiction help the series once again burst through the crowd or have the Wheels of Fate finally burnt out on this once promising looking series? 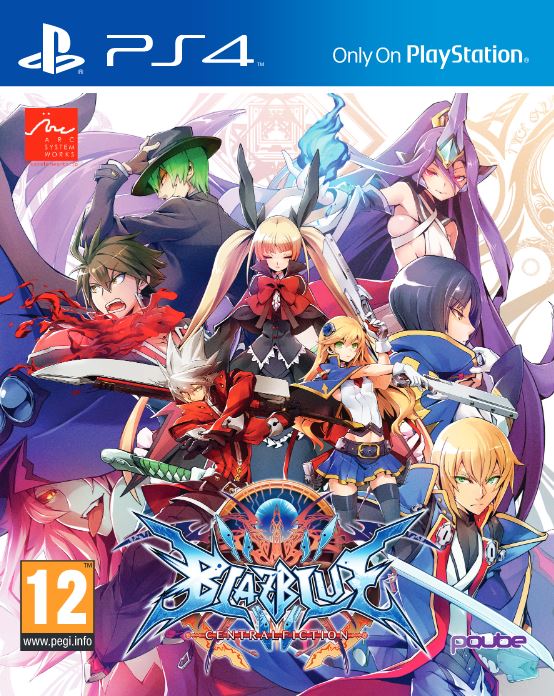 Blazblue Central Fiction is the latest title in the Blazblue 2D Fighting Game series, rather than an expansion like the Extend game this is a fully fledged sequel to Chrono Phantasma.

Blazblue: Central Fiction is the final arc in the tales of the most wanted man around Ragna The Bloodedge, for those unfamiliar with our “Hero” there is a brief story recap you can watch and also a massive encyclopedia in-game to help you with everything from people to items.

The game’s story is presented through 2 different modes, arcade and Story. First off Arcade mode is your standard fare of 8 battles with the A.I, the twist on this is that there are 3 ladders or “Arcs” each with different story sections for you characters & endings which eventually lead into our next mode. Story mode is basically a giant Visual Novel with the odd fight thrown in every now and again when the story deems it fit. It’s presented well but unfortunately isn’t a patch on its direct competition in Guilty Gear, it’s quite an in-depth story and it would suit newcomers to watch the recap and spend sometime reading up on all the terms and characters to truly get a grasp on what on earth they are all saying. 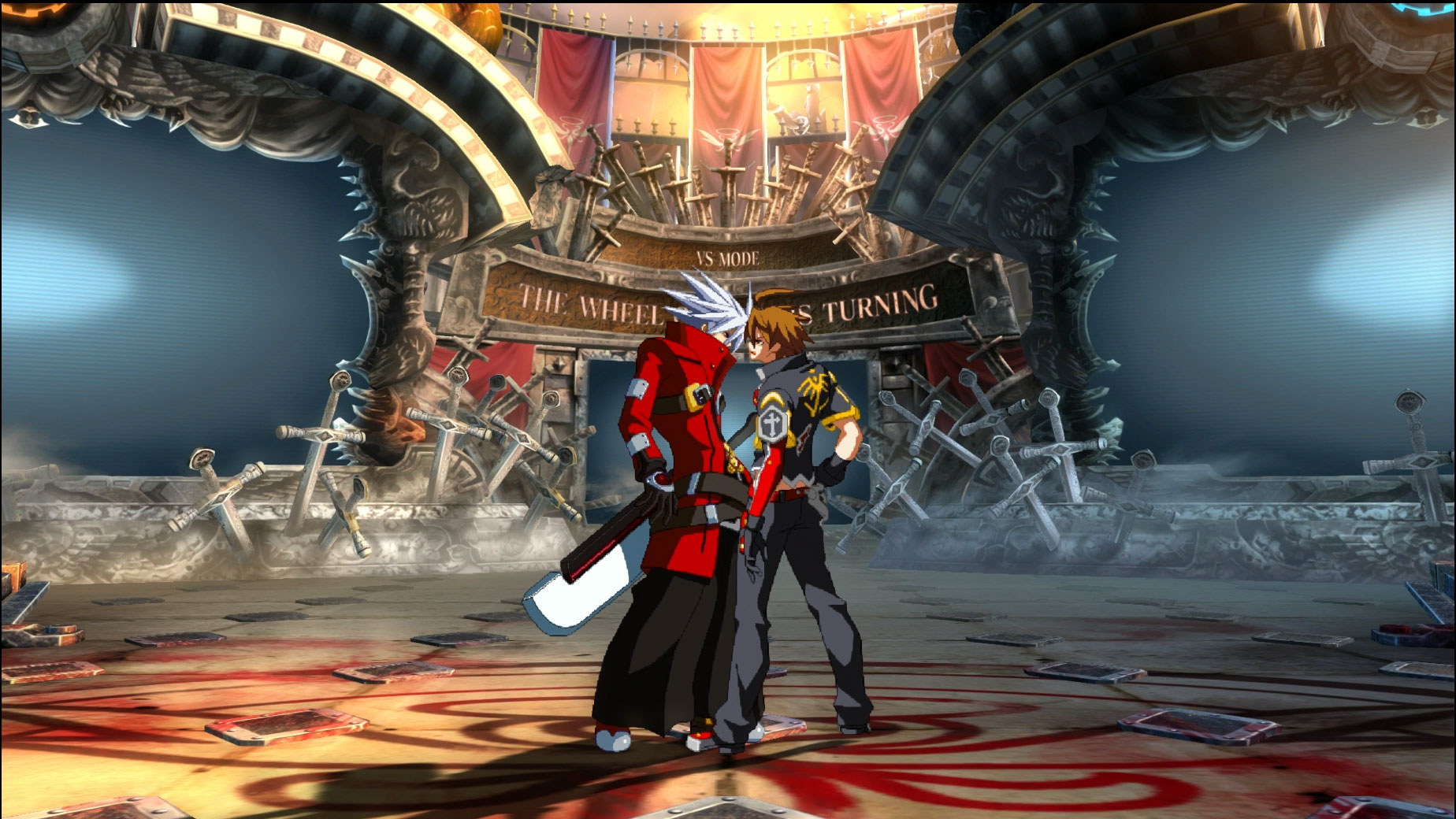 I will say as intimidating as the story is, I did find myself wanting to know more once I had grasped the basics of it, I do have to knock it though as one character in particular actually comes from another part of the series and without looking them up I felt there wasn’t enough background story about them presented in the game which didn’t help early confusion.

Graphically Blazblue: Central Fiction is a total beaut, it does have a few drawbacks from being on the same engine as the series started but once the battles start they melt away. First off I’m a total sucker for Sprite Work and Blazblue has some mighty fine character sprites and designs.  Good news is that for the most part they look amazing, bad news is they still have jaggies, not so much an issue when moving but when they are stationary pre and post match it does show.

The backgrounds are a mixture of 3 and 2D and not only beautifully animated but some of the best looking and interesting stages since SNK back in the Neo Geo days. The HUD is fairly cluttered and even though it’s all useful it can come off quite intimidating especially to people new to Blazblue or fighting games in general. 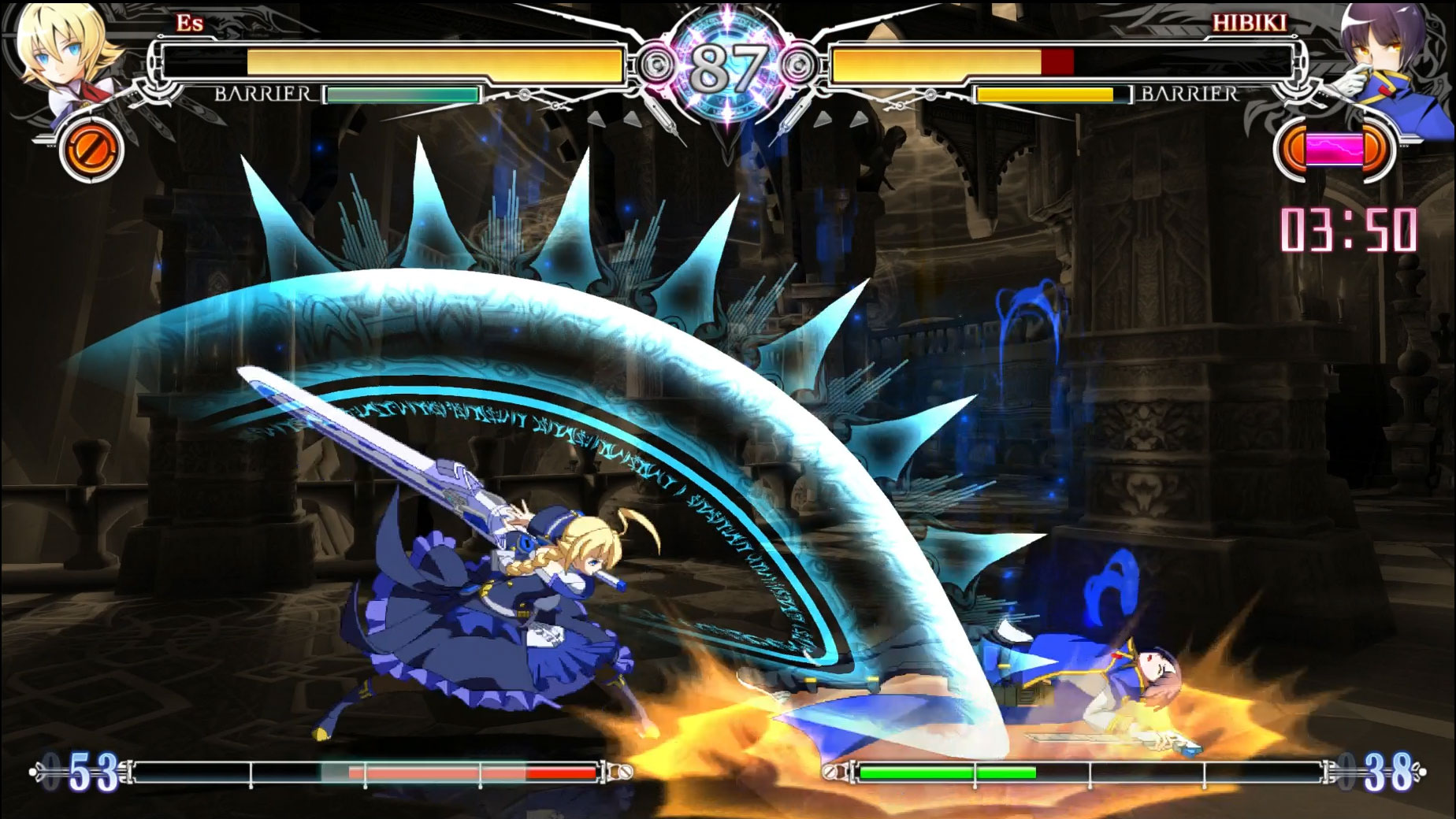 The music in Blazblue: Central Fiction is utterly fantastic, this something Arc System get right with every game and this is no exception. With that said it’s time to address the elephant in the room, the dub. Blazblue: Central Fiction is the first Blazblue title to release outside of Japan without an English dub, this is a shame as the dub has always been brilliant and unfortunately does affect the game in that some scenes don’t have subtitles and you’re left to guess what is being said. The lack of English dub wasn’t a major issue for me but I can see it being a turnoff for some which is a shame.

Blazblue: Central Fiction as mentioned earlier is a traditional 1 on 1 Fighting game much like Street Fighter, Mortal Kombat and King of Fighters, the major difference with this is that it’s styled much more like anime just like it’s kin Guilty Gear. This means the art style is heavily anime infused but also the pacing of the matches tend to be like Street Fighter on speed, very much in a good way. The roster weighs in at a huge 35 characters (1 unlock and 1 DLC) which is a healthy number for the genre and will certainly see you passing the hours alone with the three-tier Arcade Mode. 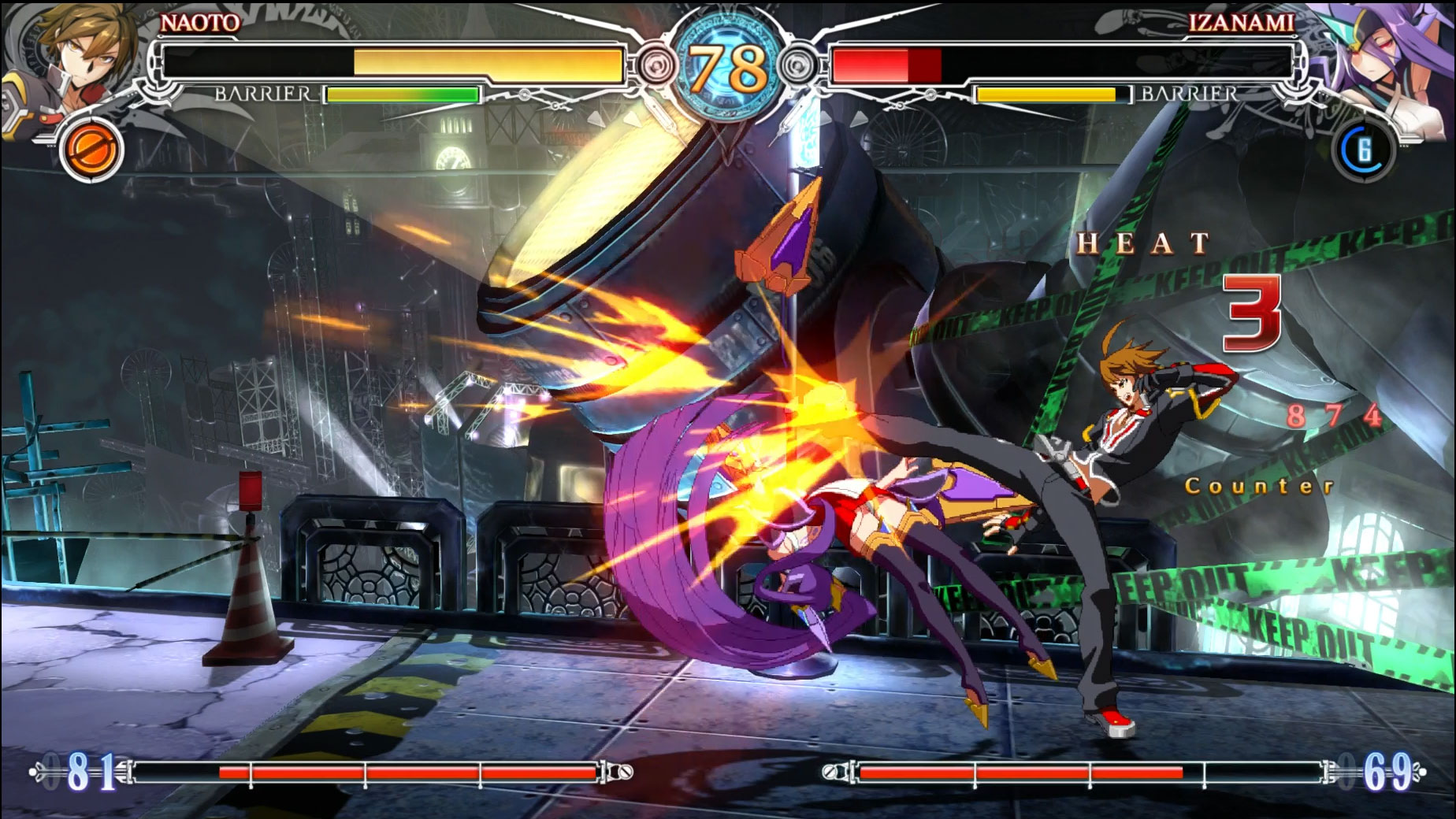 Talking about modes I mentioned the Story and Arcade modes earlier but this game also contains quite the collection of additional modes to keep you battling, character specific trials and practise mode are there as standard, Abyss mode which is survival mode but with items to unlock is back again, Score Attack mode, Speed Star mode which negates damage and sees you taking down foes in the quickest time and the standard online versus set ups.

Blazblue: Central Fiction is full of game modes to play and content to unlock from colour swaps to character endings and extras, the game also has a “newbie” friendly Stylish mode which allows newer players to pull of special moves and basic combos with minimal button presses, it’s this option which opens the game up to a wider audience and should hopefully bring more people to the online side of the game which is often purely populated by die-hard Blazblue fans.

There are several new additions to the combat system in Blazblue: Central Fiction, Excel Accel is now an option which boils down to being another special move you can perform in your Overdrive state & Active Flow which rewards more aggressive players by providing them with extra attack power as long as they stay on the offensive alongside quicker Burst Bar filling. 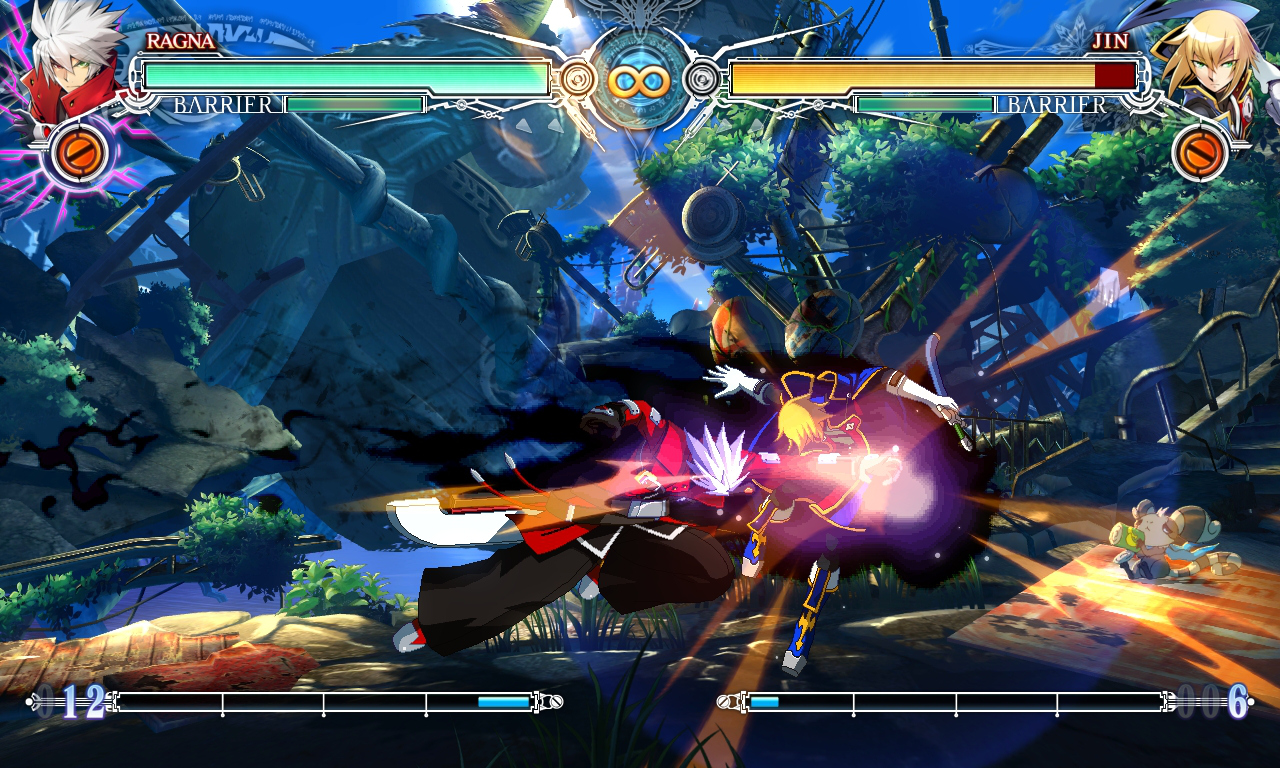 My history with the series is incredibly spotty, I played the tar out of Calamity Trigger upon it’s Europe release, not too long after that we got the follow-up Continuum Shift which didn’t grip me as much & I didn’t really feel it added enough to justify another purchase or my time, Since then I haven’t really touched the series, I actually own Chrono Phantasma Extend on my PS4 and I don’t think i’ve played it for more than an initial five minutes, Blazblue: Central Fiction has restored and intensified my interest in the franchise. Despite the initial intimidation of the Story Mode and all the various terms and commands within the game after putting some hours into it I found my time respected and rewarded, it’s actually turning me on to the series I had long written off.

Despite this game being the end of this current Blazblue story run I feel it’s the best jump on point for newcomers, once you break through the lingo and confusing story at first you’ll start to see why this franchise has such the fan following, it’s fast, it’s beautiful and most importantly it’s all kinds of fun to play. The lack of an english dub may hurt the title for some but if you can look past that the game easily stands toe to toe with the likes of King of Fighters XIV and Guilty Gear XRD -REVELATOR-.