Mugen Souls is a JRPG originally developed by Compile Heart on PS3 in 2012, which has now been ported to PC on Steam, this port was developed by Idea Factory and published by Ghostlight.

Thanks to Ghostlight for sending us the review code.

For those unfamiliar with Mugen Souls’ story, it’s a lighthearted story that doesn’t take itself too seriously about a demon girl named Chou-Chou who wants to take over the 7 worlds with her companions Altis, who despite having an angelic look to her swears she is a demon, and Ryuto who is one of Chou-Chou’s peons. 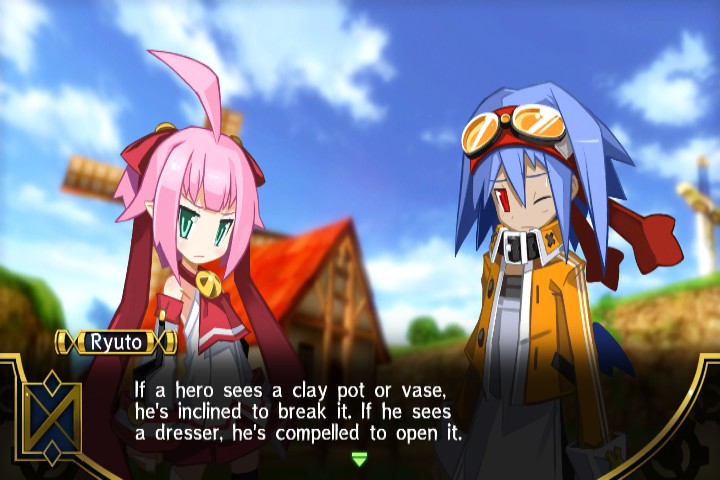 The gameplay is fairly standard for JRPGs, you explore a the map and to fight you enter a battle, by making contact with the enemy to start the encounter rather than the random battle approach.

The battle system is where Mugen Souls main strength lies. It’s turn based, where you have an area you can move about in and from there a smaller area you can attack in, this gets bigger/smaller for some skills and is fairly similar to a tactical RPG system, but in 3D and it feels a lot less restricted.

There are 2 mechanics here that stand out to me.

First, you have the Moe Kill system, which gives you 3 boxes and you have to pick phrases which will fill up one of 3 meters a little bit for each enemy within the attack radius (or all enemies if you use it on a blue crystal). One meter is the Peon meter, which will turn enemies into Shampurus (Little rabbit things which are your peons), which makes your attacks stronger in G-Castle Battles (We’ll get to those later). The second meter is the Item meter, which will turn the enemy into an item and the third meter is the Frenzy meter, which will send the enemy into a frenzy meaning you can no longer try to turn them into a peon or item, but they will get a stat boost too. The enemies you choose to attack with a Moe Kill have a certain type of Moe they like, you start off only being able to use Ego, however as you progress through the story you’ll unlock more. There are 7 different types which are Ego, Sadist, Masochist, Terse, Bipolar, Graceful and Ditz. If you transform into the right one, this will help you fill the meters. They also have a mood, which will help you decide on what approach you should take to the enemy to fill which meter.

Secondly is the Blast Off attacks. These will allow you to perform a skill on an enemy, which will knock them in a certain direction, so you can hit an enemy into another enemy for bonus damage, and used properly it can move enemies out of the attack radius, meaning you can kill an enemy without them being able to attack you if it’s used correctly.

There is also another kind of battle too, these are called the G-Castle Battles.

The game instructs you to think of these as a game of rock paper scissors, where you need to guess what attack the enemy is going to do and counter it. In these battles, you have 3 possible options.

On top of these, you have healing and strengthening attacks, which will restore HP/SP or will boost your attack. 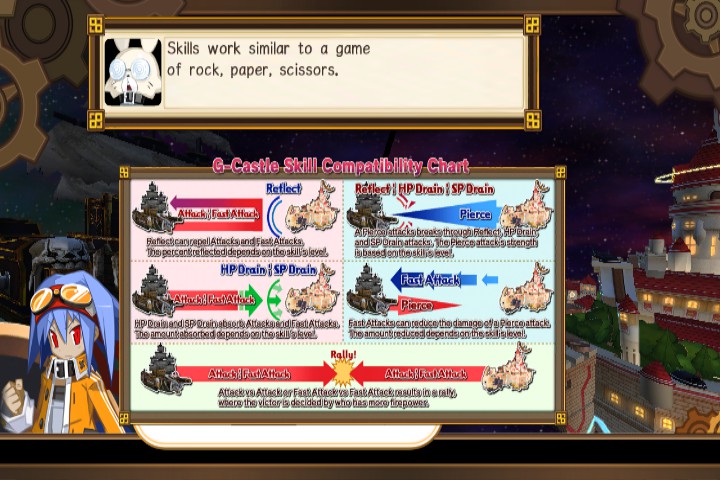 During the G-Castle Battles Ryuto will appear in the bottom corner of the screen and give you a clue as to what action the enemy ship is about to take, which you can use to advise you on what attack the enemy castle is going to do next.

The game performs really well too, I’m fairly below the minimum spec, but on the lowest setting I have next to no slowdown in game, but the cut scenes do lag a little.

Even with the good performance though, it does come with some minor issues.

The movement is WASD, but you can also click and you’ll move to that position, which is fine and feels great, but to move the camera you either have to hold down the right mouse button and move the mouse, which only works on the field, or you use IJKL to move the camera around, which as far as I’ve found is the only way you can move the camera in battle. Trying to control the camera using IJKL just doesn’t feel very smooth to me personally and it can make camera movement feel very clunky.

Another minor issue is how to access the settings menu in game. You press the spacebar while you’re in battle mode and it’ll pop up, however if you do this while exploring, it’ll give you a map of the area instead, you have to press F to bring the menu up then go down to system, it’s not a big deal, but I feel that its worth being mentioned.

Also, for those of you who like the English sub/Japanese voice, you can change the speech settings in the System menu.

Overall, it’s a nice little title. There are a few small issues with the game, but nothing that makes it unplayable, it just might take a bit of getting used to at times.